Update 06/16/13 A Blue Monorail Variant has surfaced. This photo was posted by Doug Robertson on Vinylmation Exchange. 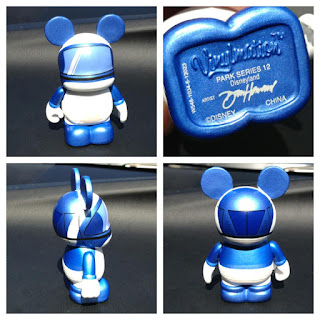 Update 05/03/13 Disney released turnaround photos of 11 of the figures. We can now assume the chaser is Darla from Finding Nemo Submarine Voyage since we saw 12 figures previewed at Disneyland a few months back and that was the one not previewed online.

Also, we now have a look at the Park 12 combo topper: 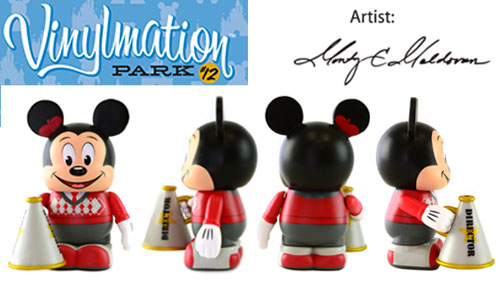 It is a Director Mickey. Not as cool as the Disney Studio Store version, but does have a megaphone. What do you think this represents? Disney’s Hollywood Studios? Buena Vista Street? Something else entirely?


Update 03/15/13 We received our first look at Park 12 from a preview at Disneyland’s Trade Night. Thank you to Trade Street USA for the original photos and info. There were 12 figures previewed, so one of the below may be the chaser or combo topper. Disneyland fans should be happy… except for the DCA themed Park 11, there may be more DLR themed figures in this set than any other. 5 that are specific to the west coast resort and 2 shared.

I like them more and they make much more sense seeing the picture next to the Vinyl. Love the “Explained” blog posts! Bring on Park 12!!!!

I’m so excited to have a splash vinyl! Also i love the country bears love seeing more of them other than big al!

Hey the prognosticator correctly predicted one vinyl right! Not an entire Splash Mountain themed Park 12 I was hoping for, but I love the inclusion of the Splash Mountain vulture. Finally Splash Mountain is represented in vinyl form! I will be picking up some Park 12 for sure.

without a doubt the worst park series yet in my opinion…:(

I second that emotion!When I look at them as a group, they seem like the worst park set to date.

I agree with underdog…this set is rough…only interested in mariachi cobre…a must have for me!…I love relaxing with a cava del tequila margarita (or 2) and listening to them

ehh. better than park 3… but still not great

Very mixed about this series. I like the variety but I’m unsure if this set will grow on me. Kinda feels underwhelming.

I ordered three park 12’s, and 2 out of 3 have bad scratches and scuffs. They aren’t too obvious, but I am disappointed.