REVIEW: New Menu at Tony’s Town Square in The Magic Kingdom, I Think I Liked It…

I have had a bit of a love/hate relationship with Tony’s Town Square Restaurant at the Magic Kingdom over the years. As a kid, I loved our winter-time meals that would overlap with SpectroMagic, allowing us to hear the music and see the sparkling lights of the parade while we dined either on the patio or in the glass “solarium” room of the restaurant. Also, with Lady and the Tramp being one of my favorite Disney animated films, I fell in love with the charming interior that evoked scenes from the movie while mixing in the feel of Main Street. Thematically, the restaurant blends seamlessly with the world around it, but the menu has always been another story.

I have fond memories of the flatbreads and seasonal desserts, but in recent years, a noticeable decline in quality has been evident. Now, I’m not saying Tony’s was ever a fine-dining establishment, but I could concoct a really enjoyable meal here. On a visit in early 2016, even the chicken caesar salad was inedible. After that experience, I did not return to Tony’s for several months. With family visiting me in December, I was “forced” to return to Tony’s as that is where they had booked a dining reservation. I begrudgingly went along, with the vivid memories of a warm salad filled with tough grilled chicken bites dancing in my head. Upon arrival, I was greeted with a menu (which serves both lunch and dinner services) with several noticeable changes… 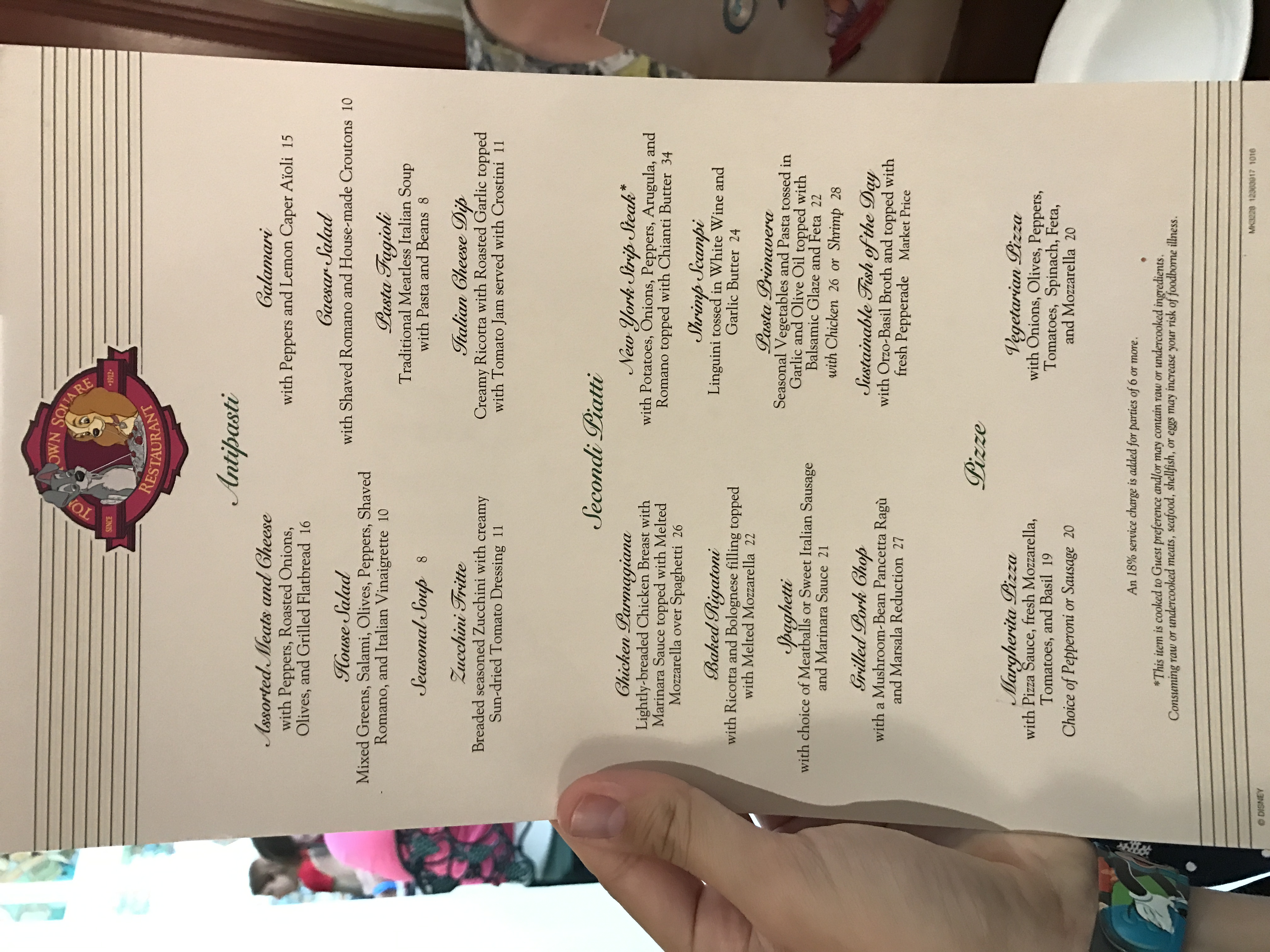 New to me on the menu was an Italian cheese dip appetizer, a grilled pork chop, and baked rigatoni. Based on my previous experience, none of these seemed like a good idea… but then my “blogger senses” kicked in, realizing my duty to our readers to inform them of menu changes and new items. I decided I would take one for the team… 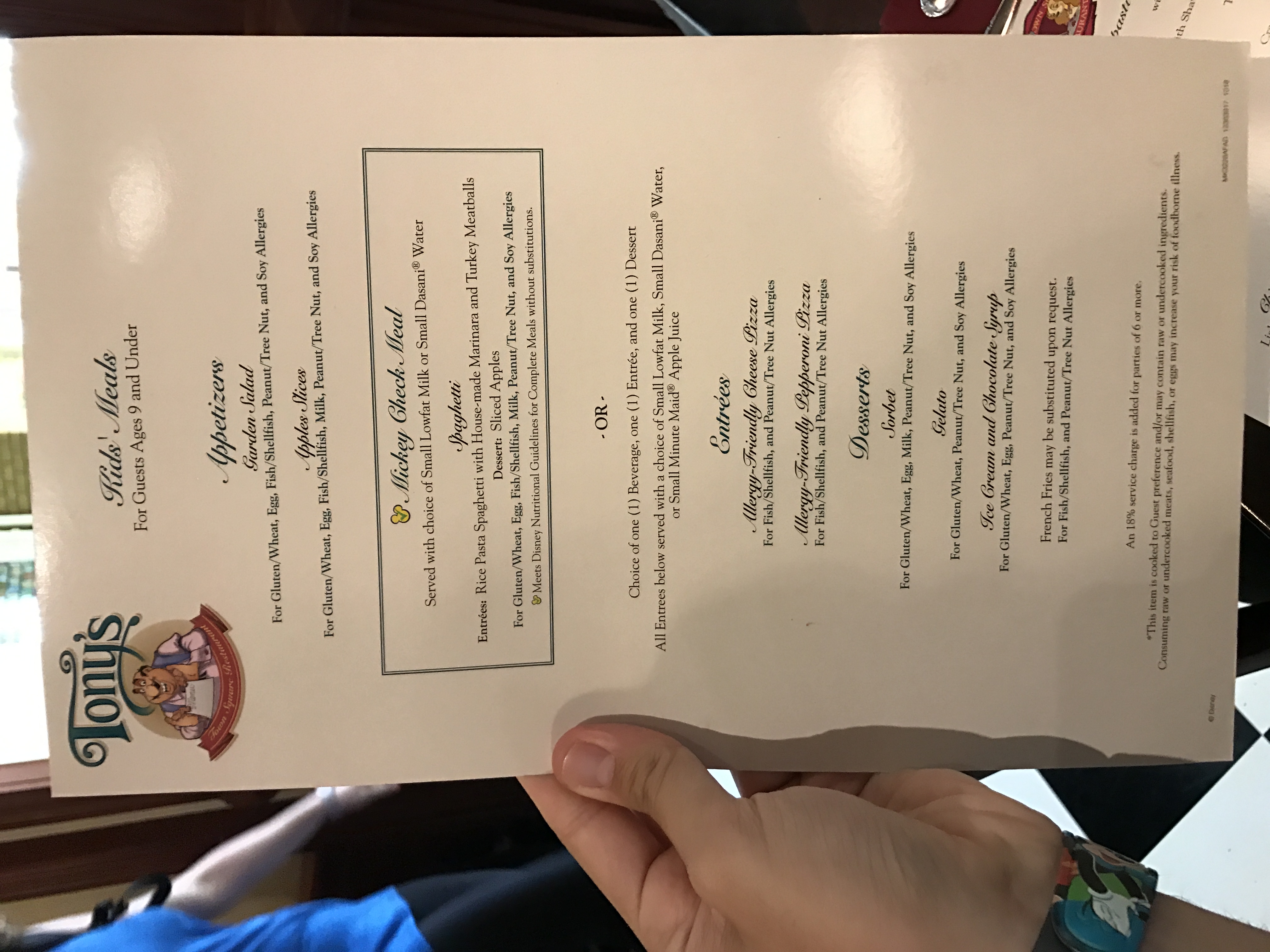 Below is the regular kid’s menu. 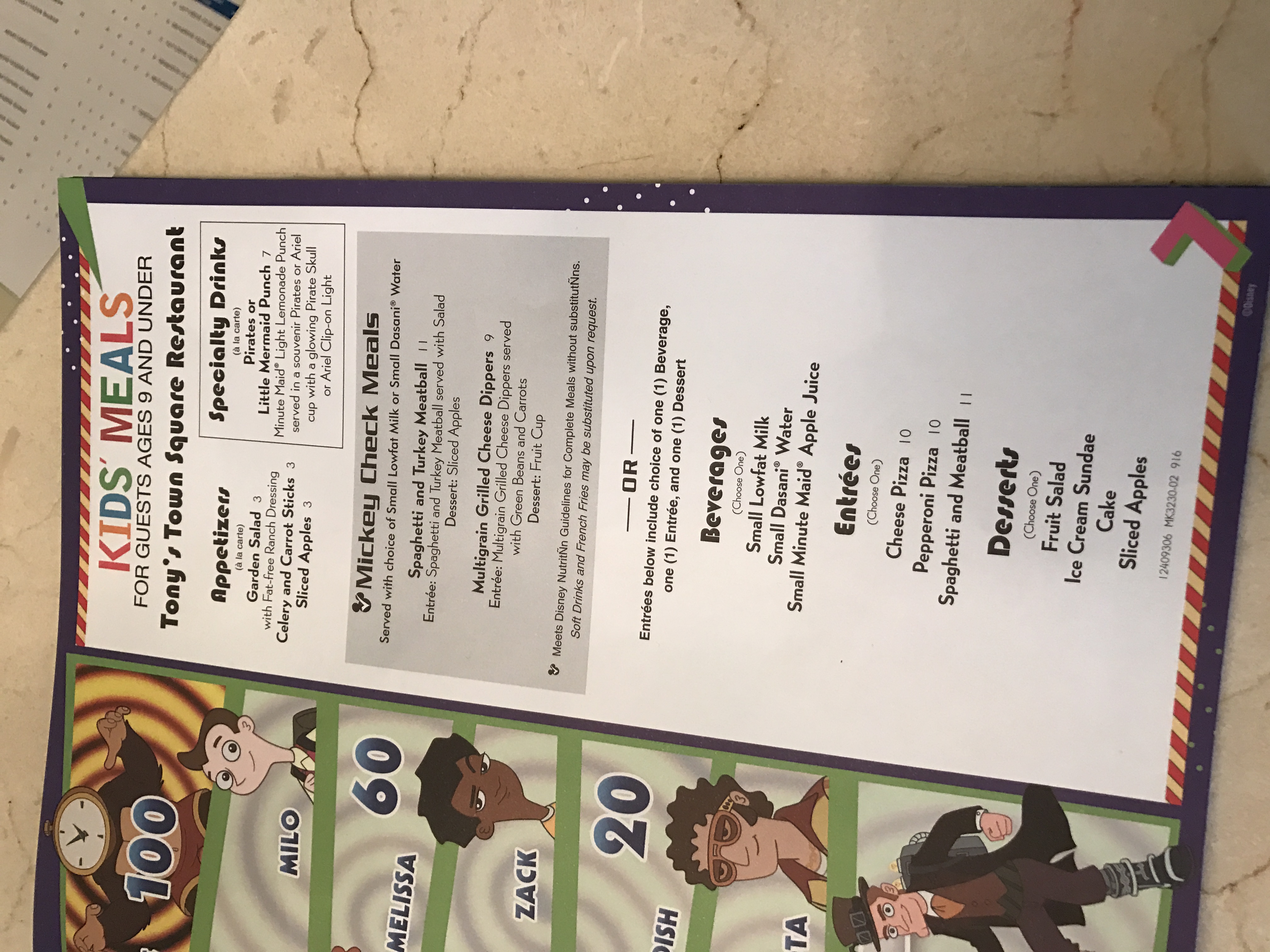 Alright, let’s start with the appetizers… 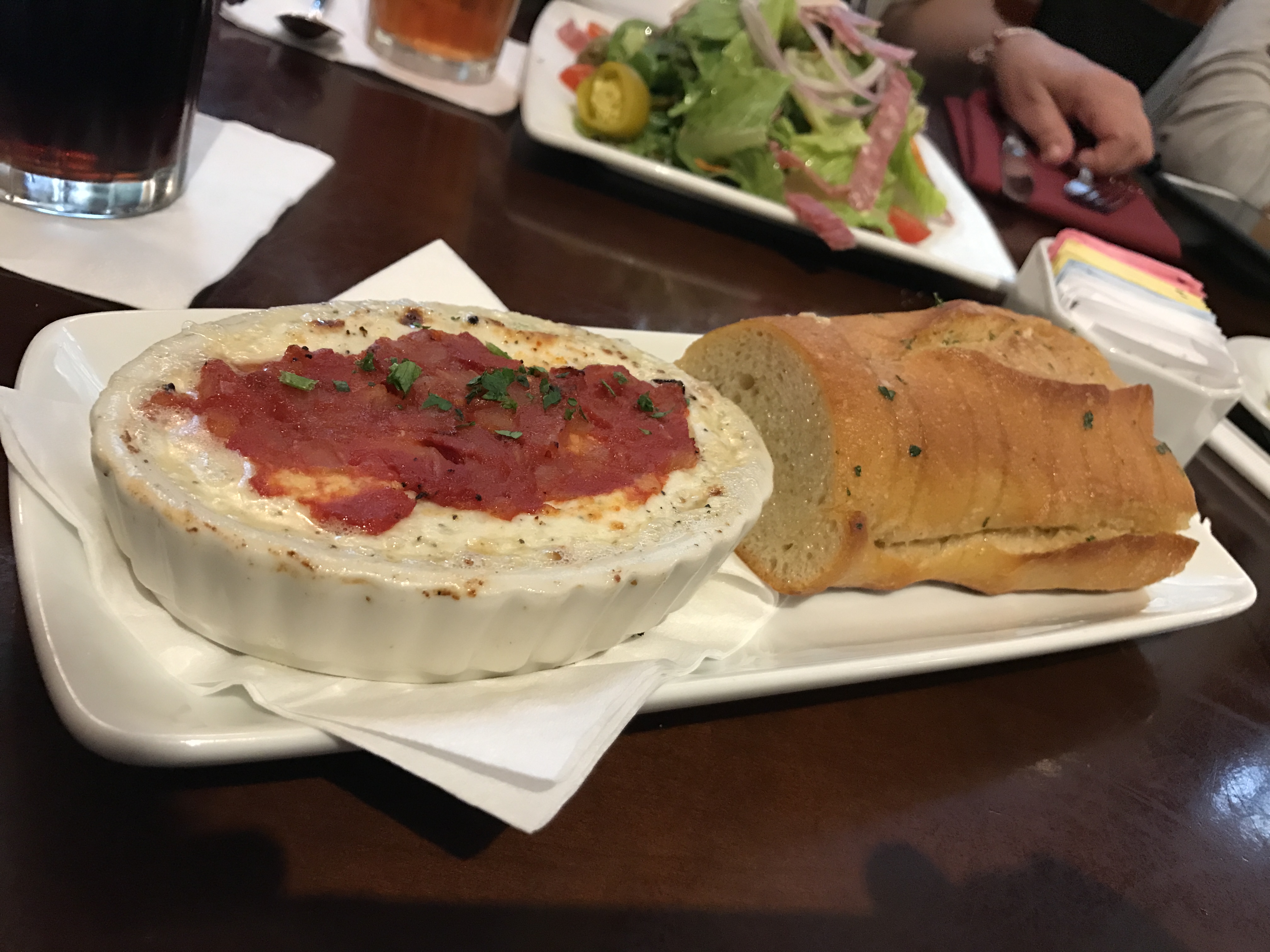 This description almost sounds like an entirely different dish. The ricotta was passable, but the “tomato jam” was basically a thicker version of the “red sauce of death” typically served at Tony’s. Stick with the complimentary bread… 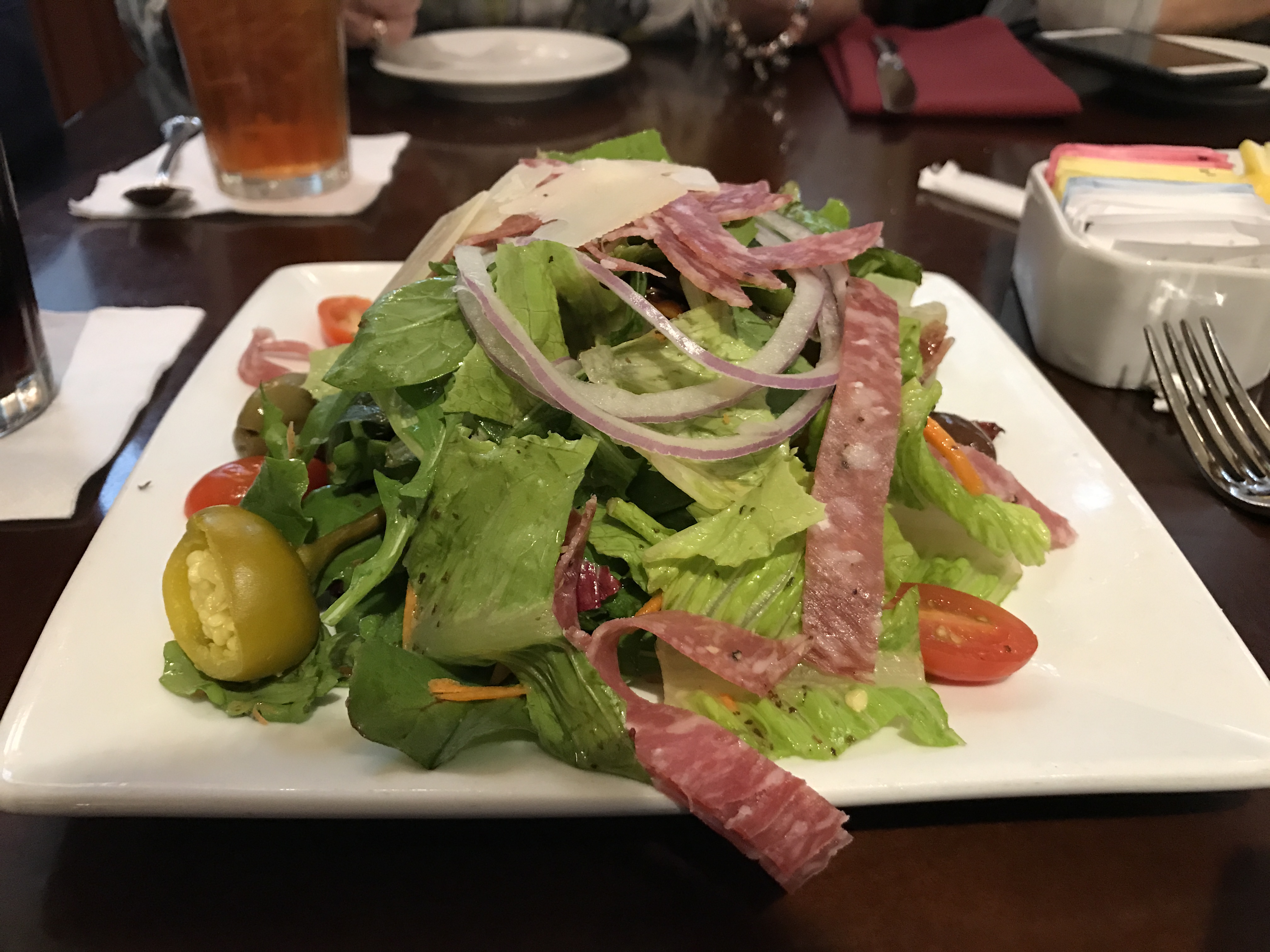 This was surprisingly good, which is probably what I would say whenever I enjoy any sort of dish at Tony’s. It’s a giant portion, it is fairly unique for a in-park Disney restaurant, and the flavor is good. I loved the mix of the salami and peppers in here, taking it from ordinary house salad to something a little more interesting (albeit normal to me growing up in an Italian household). You could easily share this among a few people before a meal as a nice, light starter.

Complimentary Bread with Olive Oil Sauce (THE PRICE IS FREE) 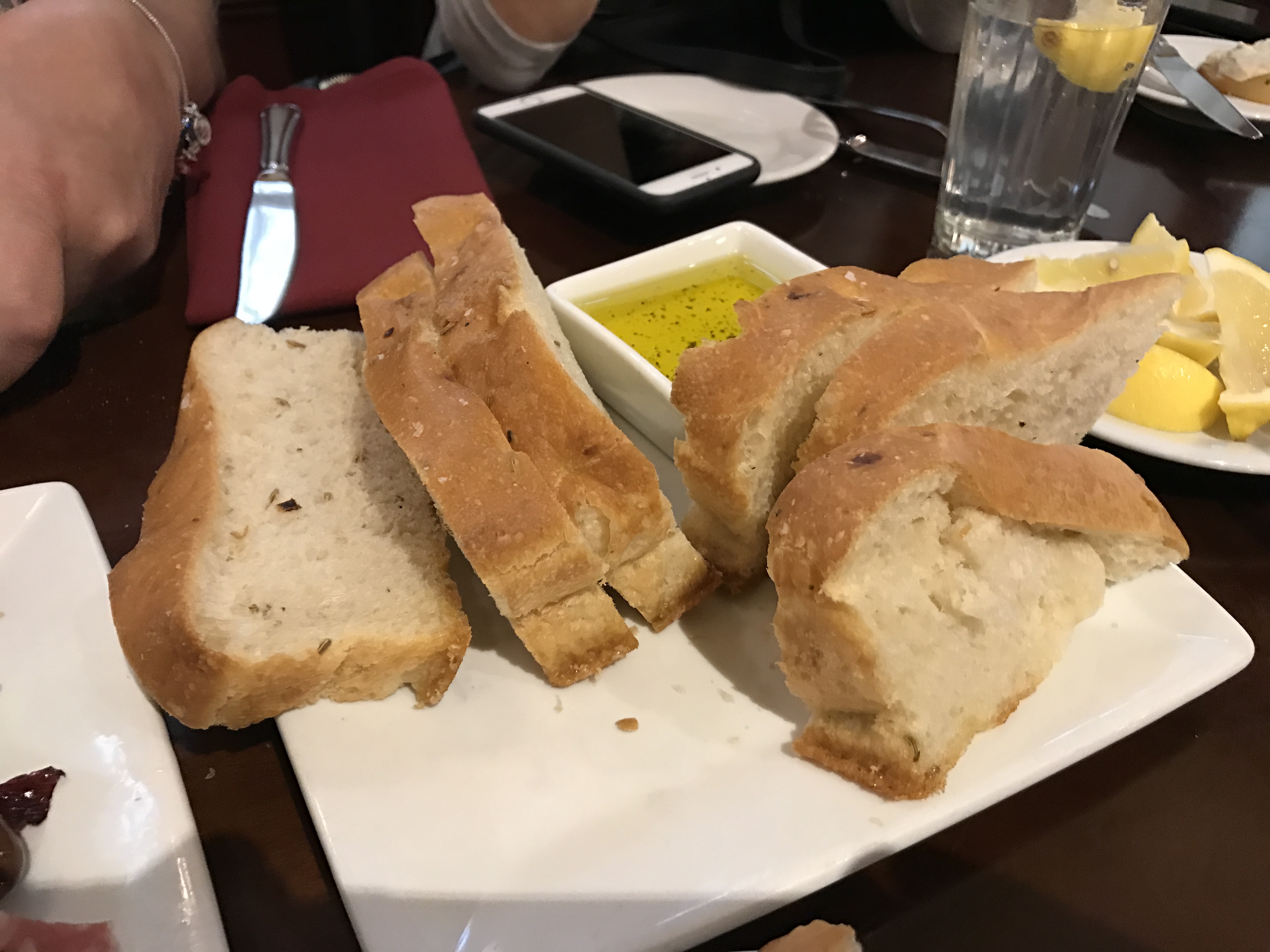 I legitimately loved the bread. It was cooked nicely and was soft and fresh, and it perfectly soaked up the olive oil “dipping sauce”. Skip the Italian Cheese Dip and just enjoy this before your meal.

Alright, now on to the entrees… 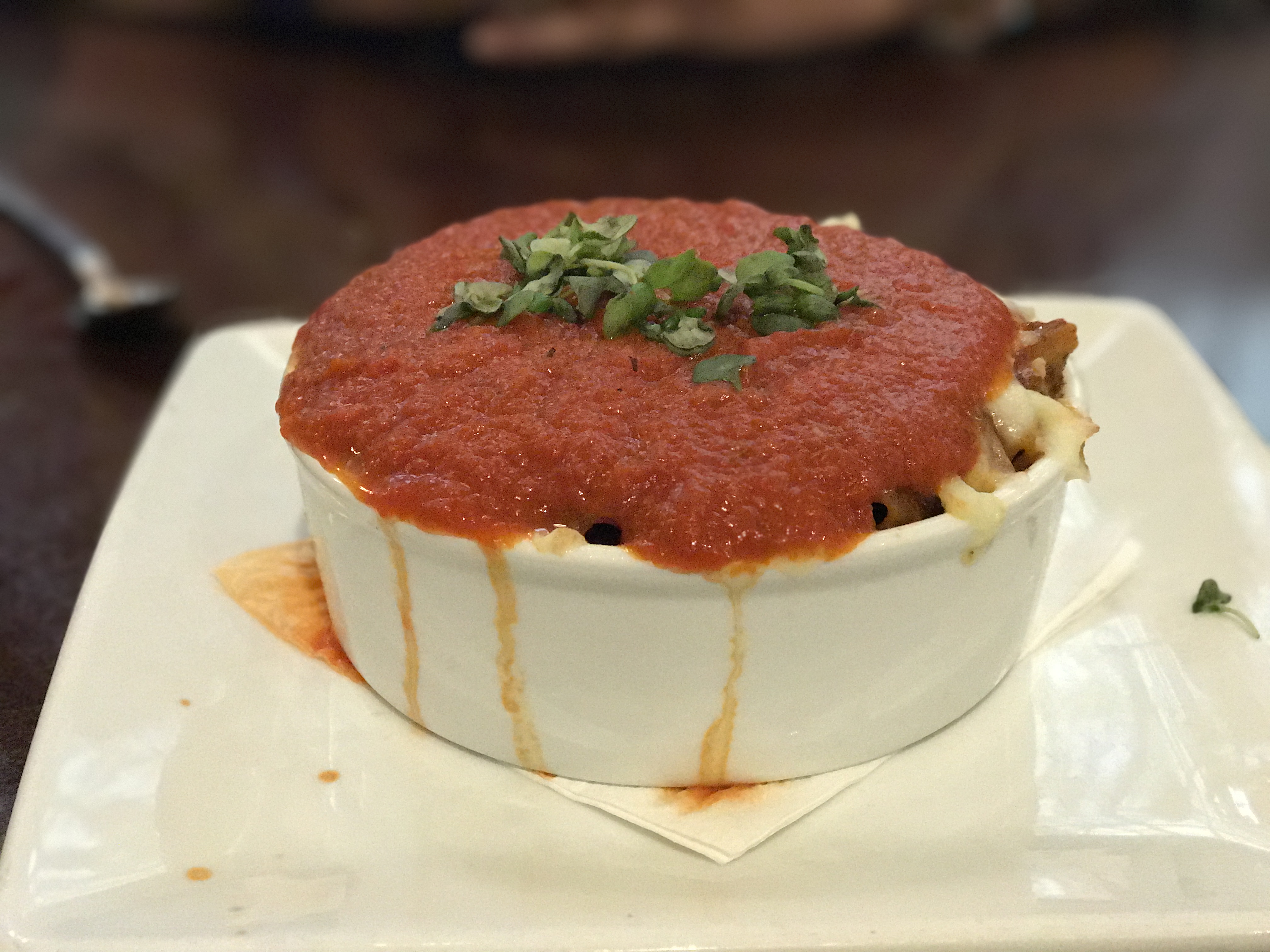 with Ricotta and Bolognese filling topped with Melted Mozzarella

This sounded like a mistake… but it really wasn’t. Tony’s red sauce is still not the best, but they bake a pretty good ricotta cheese and the pasta & meat were pretty decent. I would take this over the spaghetti and meatballs for sure… just maybe don’t stare directly into it. That would be dangerous, very dangerous. 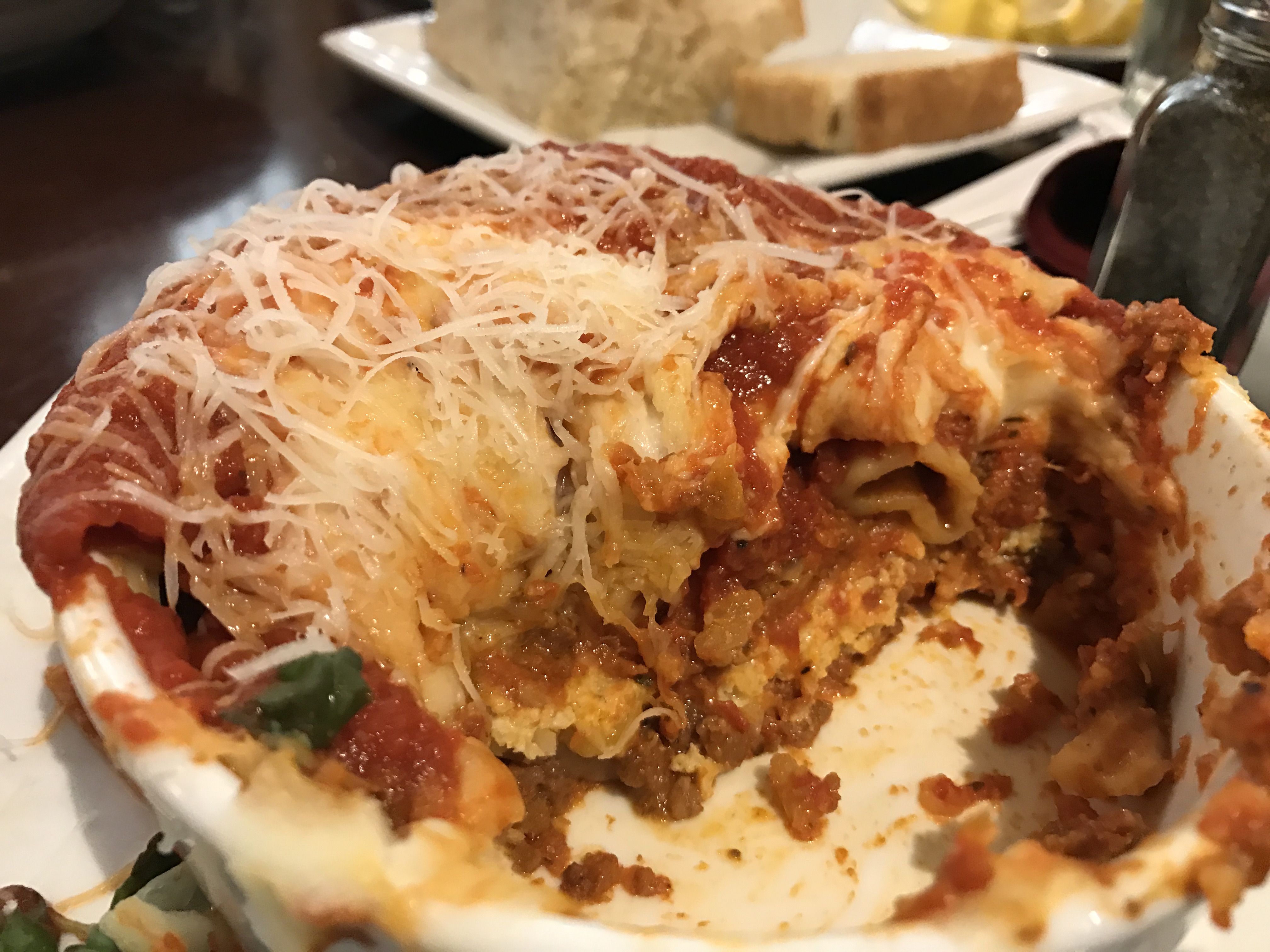 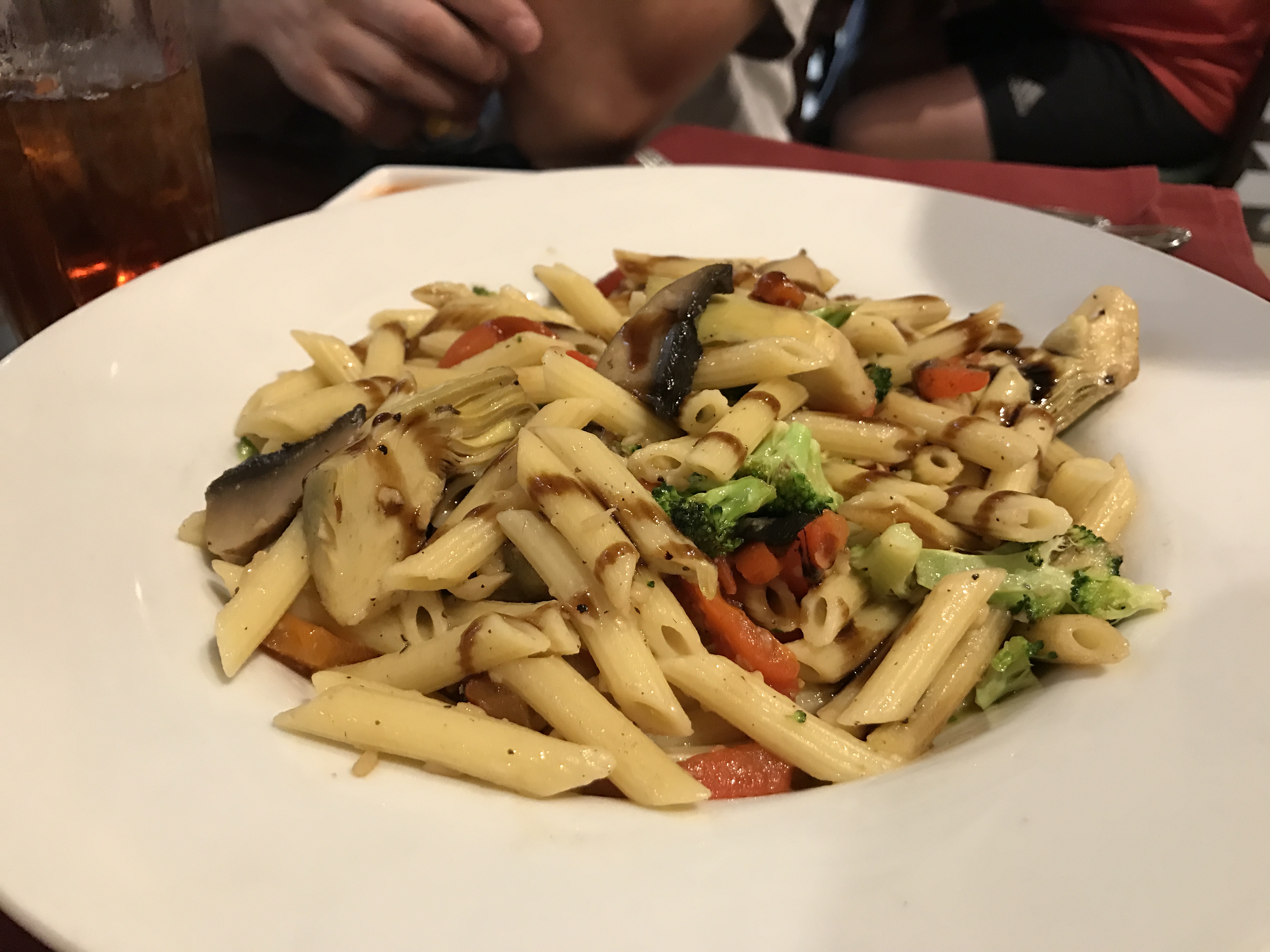 If you are looking for pasta, but need to avoid the Tony’s red sauce, this is the route to go. The vegan in our group ordered this without the chicken or shrimp (and sans feta) and was quite pleased with it. 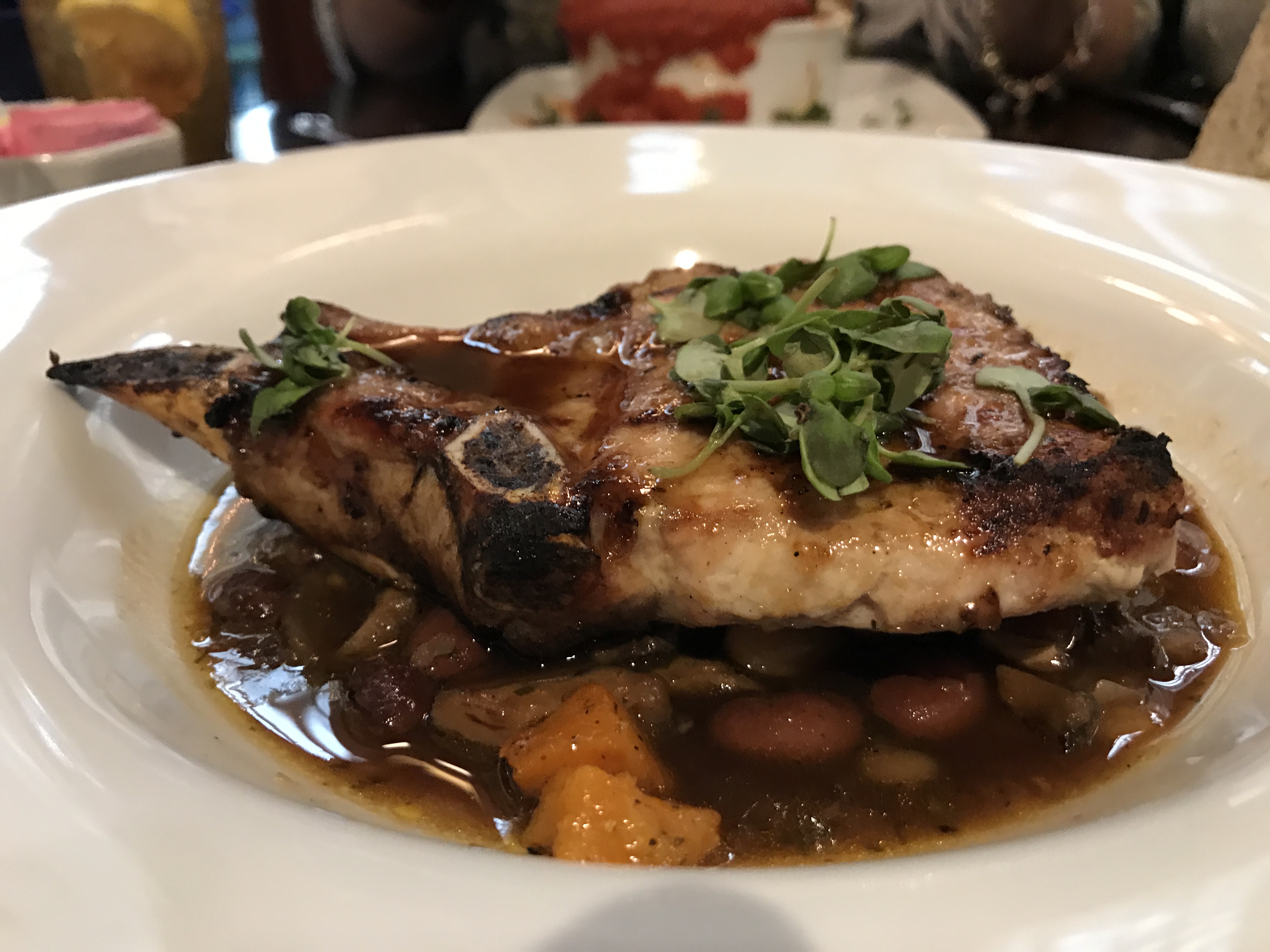 with a Mushroom-Bean-Pancetta Ragù and Marsala Reduction

At the time, we still did not know that alcohol was coming to Tony’s Town Square Restaurant, so I thought the presence of a grilled pork chop was insanely out of character for this eatery. It seems they added the pork chop to pair with some of the beverages, which now makes sense, but at the time simply did not. This dish peaked my interest as it was unlike anything I had ever had here and I immediately felt there was no way that Tony’s was going to pull this dish off. So of course, being a theme park restaurant – smart***, I ordered it.

I have to honestly say, this was the best dish I have ever had at Tony’s Town Square Restaurant. Maybe the constraints of trying to be a semi-Italian Restaurant in the world’s most visited theme park stifles them a bit, but stepping outside of their comfort zone, they have created a dish that is far and away their absolute best.

The Mushroom-Bean-Pancetta Ragu and Marsala Reduction pair absolutely perfectly with the nicely grilled pork chop for a unique taste that is more akin to a pork stew. The dish is of the perfect size and it isn’t insanely heavy like many of the pasta dishes served here. It might be the only meal at Tony’s that won’t make you feel bloated and gross, if I may be frank. Don’t get me wrong, it isn’t the best pork dish I’ve ever had, but it’s the best table service entree I’ve had outside of Cinderella’s Royal Table and Skipper Canteen in this park. 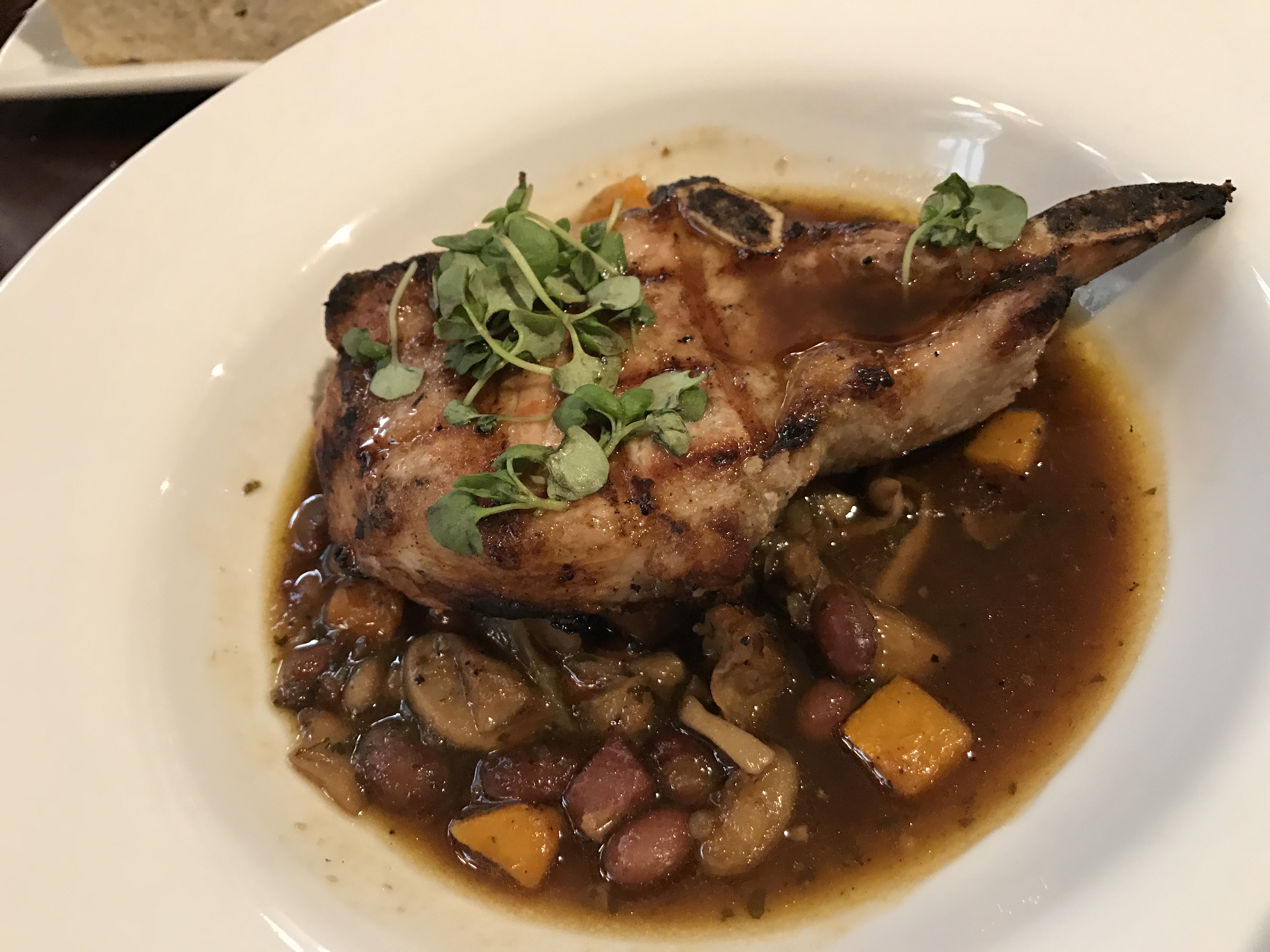 Tony’s is still not in the top 3 restaurants I would send people to at the Magic Kingdom, but if the kids only want pasta or you just have to eat here, it is probably good to know that you still have some options that won’t ruin your day. I love Tony’s out of pure childhood nostalgia, but the current menu makes it possible to stomach it and feel good about it. I recommend the grilled pork chop highly (if you couldn’t tell), but I would recommend the garden salad and pasta primavera as well. If you happen to run into the “Italian Wedding Soup” as a seasonal soup, you should order it. The dessert menu is solid too, with the seasonal cheesecake always being a highlight.

Now, the alcoholic drink menu was added since my last visit, so I am including it below: 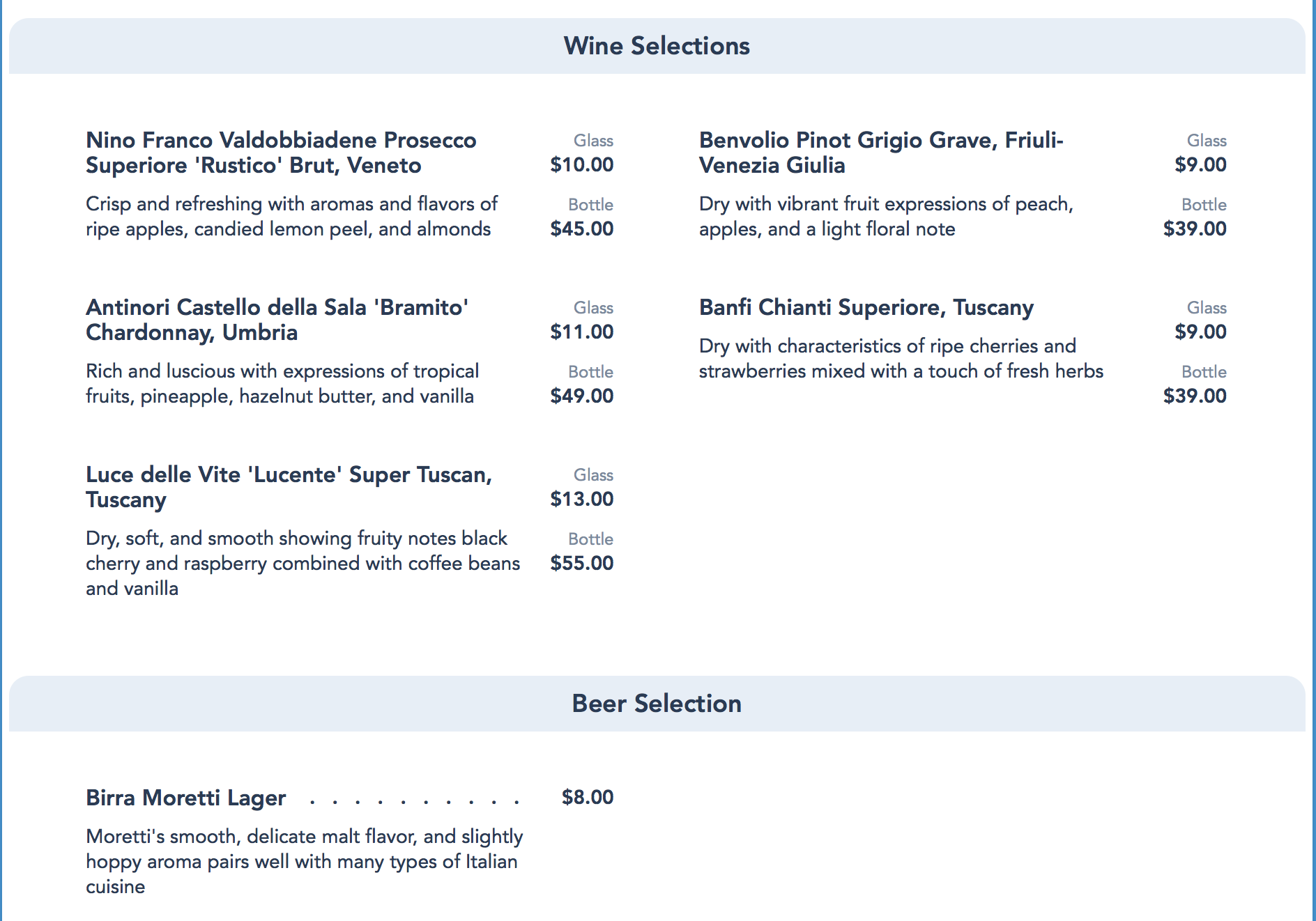