I don’t often come back to a restaurant for a second review, but I have been told that perhaps I missed something at Homecoming Florida Kitchen at Disney Springs. My first review was positive, but seemingly not as positive as what many others have had to say (and I’m not talking about the people who “like” everything they have ever had).

Before we dive in, you should probably check out the original review of the restaurant from July 2016. In that review, we cover a majority of the appetizers and desserts, as well as 3 of the entrees and some of the alcoholic beverages.

This review will cover a few new offerings, as well as two items that were ordered again (not my decision, but the guest I was with decided they really needed to try them). 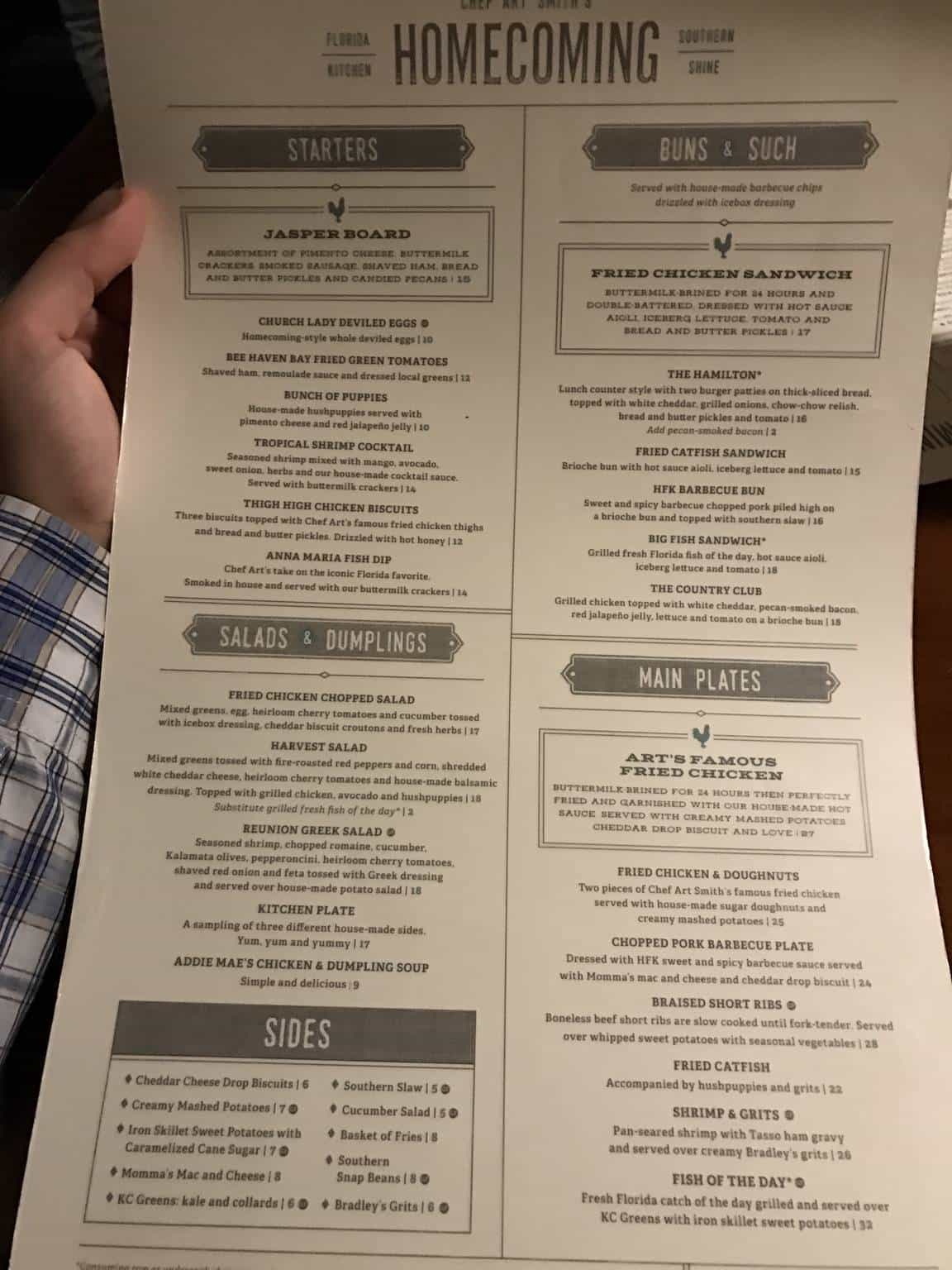 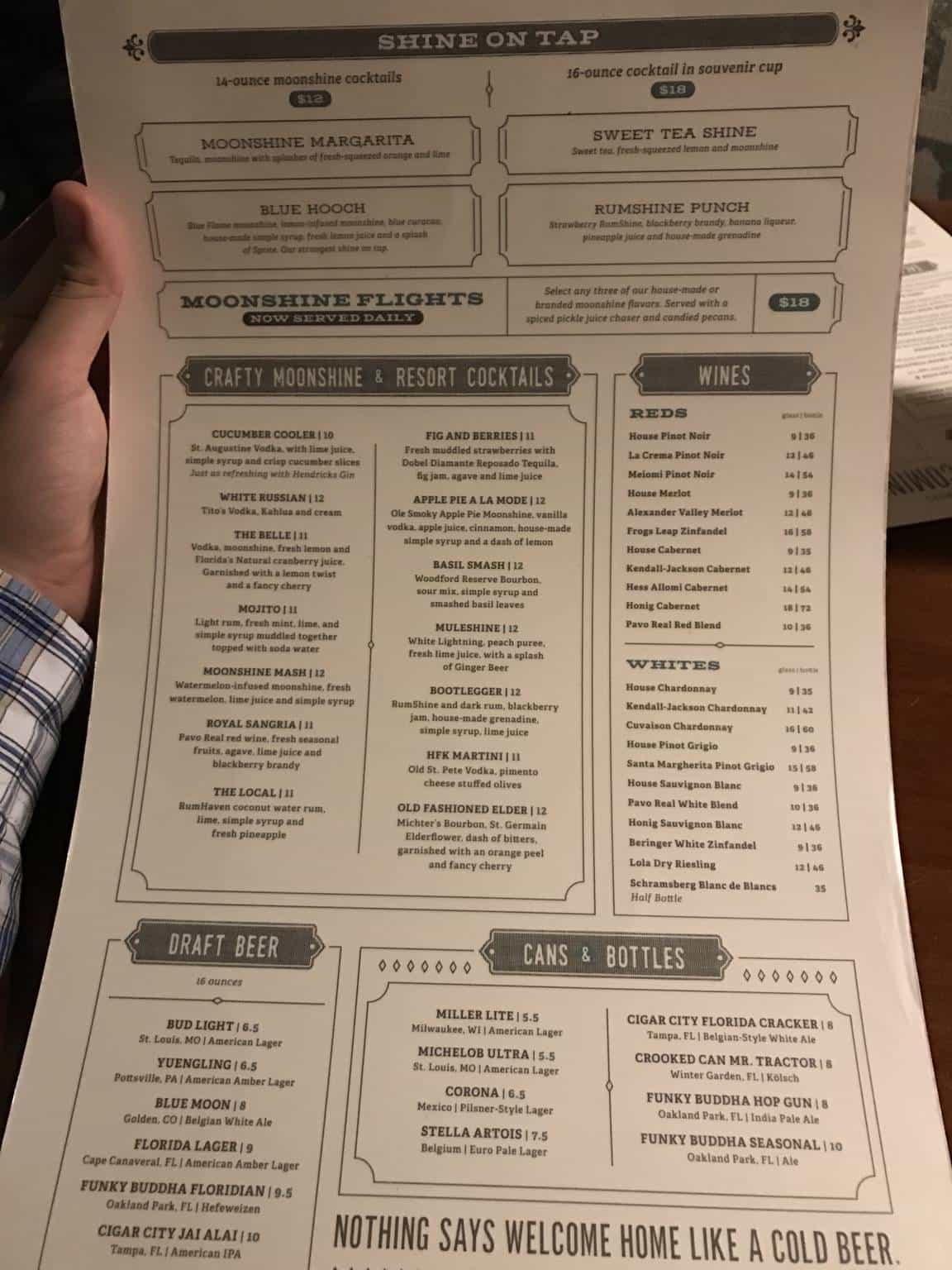 The Country Club sandwich is new to the menu.

The thigh high chicken biscuits are new on the starters menu.

They also now have a moonshine flight, so let’s start there…

The moonshine menu itself was not in stock when we visited, but the Moonshine Flight was new and listed, so I wanted to try it. Seeing as though I had no idea what I was getting into, I asked our server (who thankfully was also the bartender) to pick three of varying flavor palettes for me to try. She did not fail to provide three quality shines, and two chasers (the hot/buffalo sauce and the pecans).

I didn’t even know that I liked Moonshine until trying this. If you think this is something you might find enjoyable, I would say to go for it. Hopefully they actually have them on the menu when you visit…

New to the menu, the thigh high chicken biscuits are a good option. The chicken tasted great (crispy and flavorful), and the hot honey topping was nice. The biscuits were still a little dry, but otherwise this is an enjoyable appetizer.

Here’s what I had to say about this last time…

This was my favorite dish of our entire experience. The barbecue sauce had a nice spice to it with a good kick, which is pretty much all I ever want out of barbecue sauce. The macaroni and cheese was crunchy and well seasoned on the top, yet creamy and soft underneath, making for a really pleasant flavor combination. The inclusion of a biscuit was nice bonus as well. Overall, a lot of food for your money and my #1 choice at Homecoming.

I still feel the same about this dish, but I still have issue with the biscuits being so dry and flavorless. I’ve had enough country style biscuits in the 4 years I have lived in the south to know that these aren’t that good. Otherwise, I still put this dish at the top of the list when visiting Homecoming.

I was really worried about the jelly topping (not usually my thing), but this was rather enjoyable. The bun was nice and soft, the chicken was cooked well, and the pecan-smoked bacon accented everything nicely. This is a solid option if you are looking for a sandwich (one of the cheaper sit-down options in all of Disney Springs).

We had the Hummingbird cake again, and my thoughts haven’t changed on it…

This thing is ginormous and as good as it is massive. It has a taste akin to like a really good banana bread, but the pineapple mixture gives it an interesting flavor. The lump of ice cream is unnecessary given the size of this, but it’s nice to have. At least 3 people can split this.

I changed my mind on the ice cream as it was a nice break from the dryness of the cake from time to time, and they blended together perfectly.

Here’s what I thought back in July…

All in all, Homecoming Florida Kitchen is good, but I just don’t know if it is good enough to hang in there with the best of Disney Springs. The Boathouse, Morimoto Asia, and Frontera Cocina are all phenomenal, and honestly, I’d rather have a select few counter service meals at Springs over some entrees here. Homecoming is a good addition for the added capacity it brings, the unique menu it offers compared to everything around it, and for the truly wonderful appetizers, drinks, and desserts featured. That being said, I’m not sure I would rather have the Shine Cake than the Pecan Pie from Frontera Cocina, I wouldn’t take any of our entrees from Homecoming over anything I’ve tried at the Boathouse, and I don’t feel the value on most entrees is near many other at Disney Springs.

Homecoming is good, it’s just really hard to be excited about what is offered here after a year of trying some really phenomenal new additions to Disney Springs. There are reasons to go here, there are just more reasons for me to return to many of the other options at Disney Springs before that.

I was definitely a little harsh on them in my first review, and after a few visits in the last 6 months, I am feeling a little better about Homecoming. Honesty, I think the drink menu is worth a visit alone. I didn’t know hoe much I enjoyed Moonshine until I had this flight and I will likely return to try all of the different shines offered at some point in the near future.

My strategy here would be to do some appetizers, a sandwich, and save room for some dessert if you can. If you are looking for something a little cheaper than some of the other table service restaurants at the Springs, the sandwiches here fit the bill and won’t break the bank. The Boathouse and Frontera Cocina are hard to beat, but if you are looking to eat cheaper and do not want Mexican cuisine, this would probably be the best option for you. As far as drink menus are concerned, I give a slight edge to Homecoming, but Boathouse and Frontera aren’t slouches in this department either (nor is Planet Hollywood, believe it or not).

Next
VIDEO: Watch As Darth Vader Battles Buzz Lightyear In This Impressive Fan Made Film