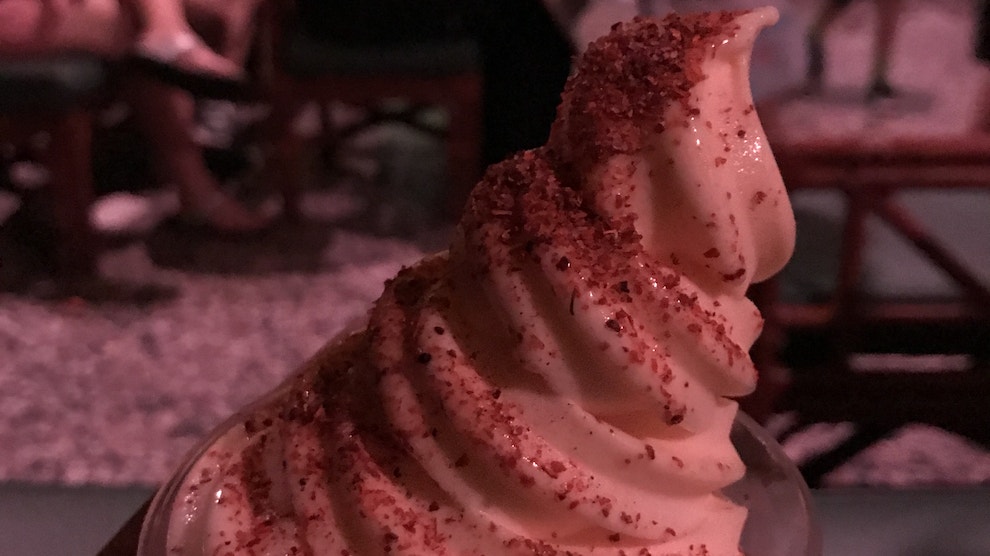 Messing around with the legendary Dole Whip at Disneyland Park may sound a little sacrilegious, but sometimes it’s good to update the classics. Just look at many of the wonderful updates made to Disney attractions over the years, enhancing the ride or show while keeping the original flavor. While you may want to stick to the standard treat (or maybe even get some Dole Whip flavored Cotton Candy over at Disney California Adventure), those who are a little more adventurous might seek to enhance the Dole Whip with a new seasoning that is being offered…

Disneyland already offered this Tajin seasoning at locations with fruit dishes, but it is now also behind the counter at the Dole Whip stand outside of the Enchanted Tiki Room.

The classic Tajin seasoning is not listed on the menu, but an individual packet is available upon request when you purchase a Dole Whip (at top added charge). Typically used as a fruit and veggie booster, the seasoning may seem to be a little strange for a frozen treat, but there’s a good reason it is being offered. The official description of the seasoning:

So, I took my snack and my seasoning packet into Walt Disney’s Enchanted Tiki Room and did the deed…

Would my pictures have turned out better in the sunlight? Sure. But c’mon, it’s the Tiki Room at Disneyland!

If you read the dining reviews on this site regularly, you know just how much I love spicy items, and that I can take or leave a Dole Whip. Don’t get me wrong, I like the Dole Whip, I just probably only get it like once or twice a year despite visiting Disney Parks 5-6 times a week. That being said, this combination was awesome. I enjoyed the Dole Whip with Tajin much more than without, and I think you should give it a try the next time you procure one if you are a fan of the Disneyland delicacy. Don’t worry, it isn’t overly spicy. As the description implies, it is a mild heat. The lime flavoring is also a nice touch to the existing pineapple flavor, in addition to the spice it offers.

Tajin does also offer spicier seasonings on the market, and I’d love to see a variety at the parks so I can have a really spicy Dole Whip, but this will suffice for now. I told you, I really like spicy food.

If you are one of those people who makes Dole Whip at home, you can also easily find the seasoning in your local supermarket, or even online on Amazon. The large bottle is more economical for home use, but if you want to try Tajin at Walt Disney World (which has not started offering the seasoning yet, and may never), buying the box of packets will be more convenient.

Yum! What I think people don’t realize is that Tajin is meant to be put on fruit and fruity things. The Tajin in our grocery store is located right in the fruit section of produce. I can’t eat pineapple without it now! It’s so dang good on pineapple…so I can imagine it’s pretty good on a pineapple dole whip. Do you know if they have Tajin packets at WDW? I’d love to try this, but we have no plans to Disneyland any time soon.

Oh my god this sounds amazing! I tried the Maelstrom margarita from the Mexico Pavilion last week and it was a wonderful mix of hot, tangy, salty and sweet so this mix just sounds fantastic!