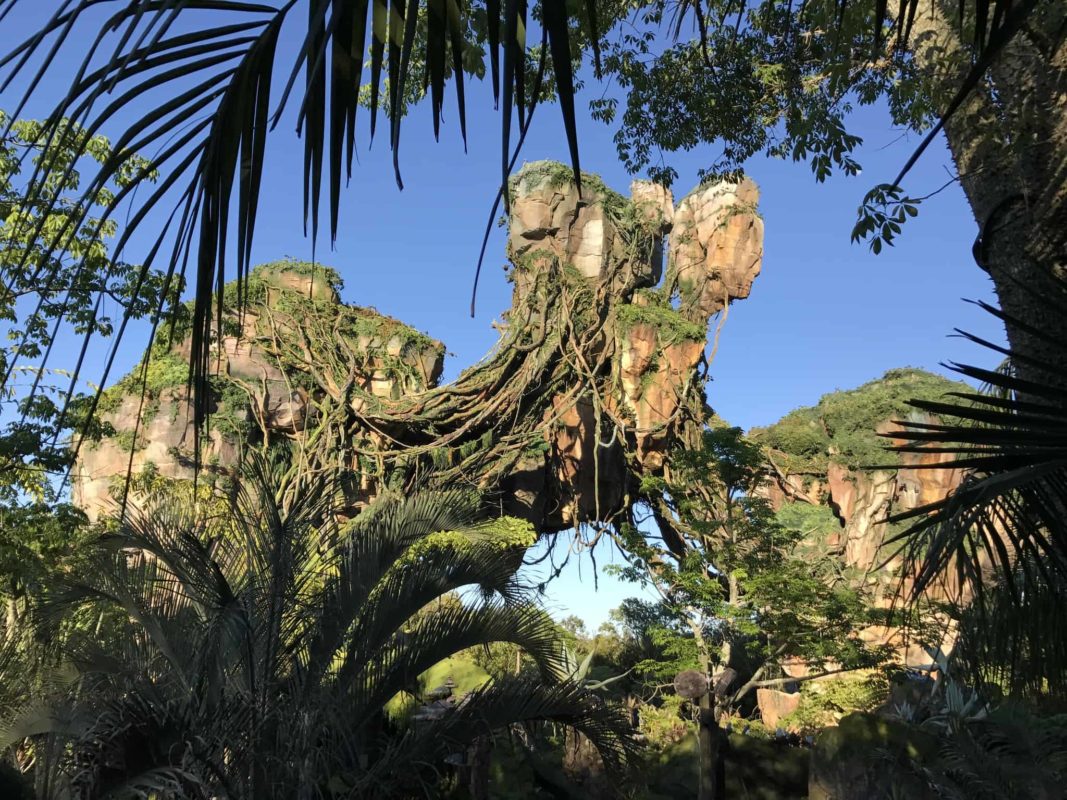 On Saturday evening, I was lucky enough to be invited by a friend to a cast member preview of Pandora: The World of AVATAR at Disney’s Animal Kingdom theme park. While not yet open to the public, there are a series of previews for certain types of guests between now and the May 27th grand opening of the land. While I have still not experienced the Flight of Passage attraction and the Satuli Canteen (which we hope to during Saturday’s annual passholder preview), I have received a lot of questions about my experience, so I wanted to share what we saw during our 2-hour preview. Here we go…

We have seen lot of very pretty press photos, and the jaded theme park blogger in me was skeptical if I would care about trees and rocks. Turns out that I do. 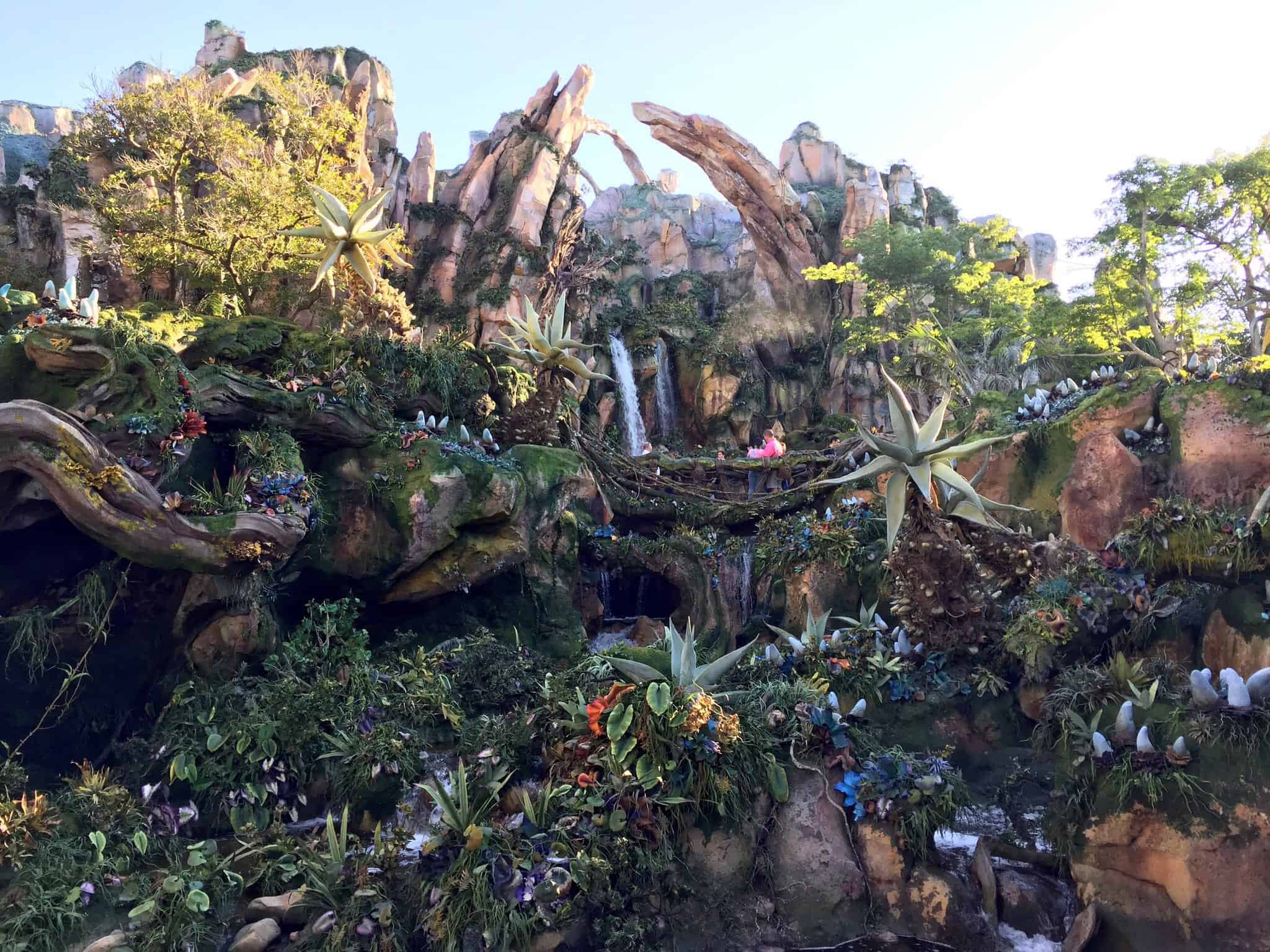 Pandora is absolutely stunning and evokes all of the feelings I had the first time I gazed upon the Cadillac Range from inside of Cars Land at Disney California Adventure. The floating mountains are amazing, especially when you stand underneath them. They are unique in that they are in the center of the land, allowing you to see them from 360 degrees as you traverse the land and the attraction queues, each angle giving you a completely different, awe-inspiring view. 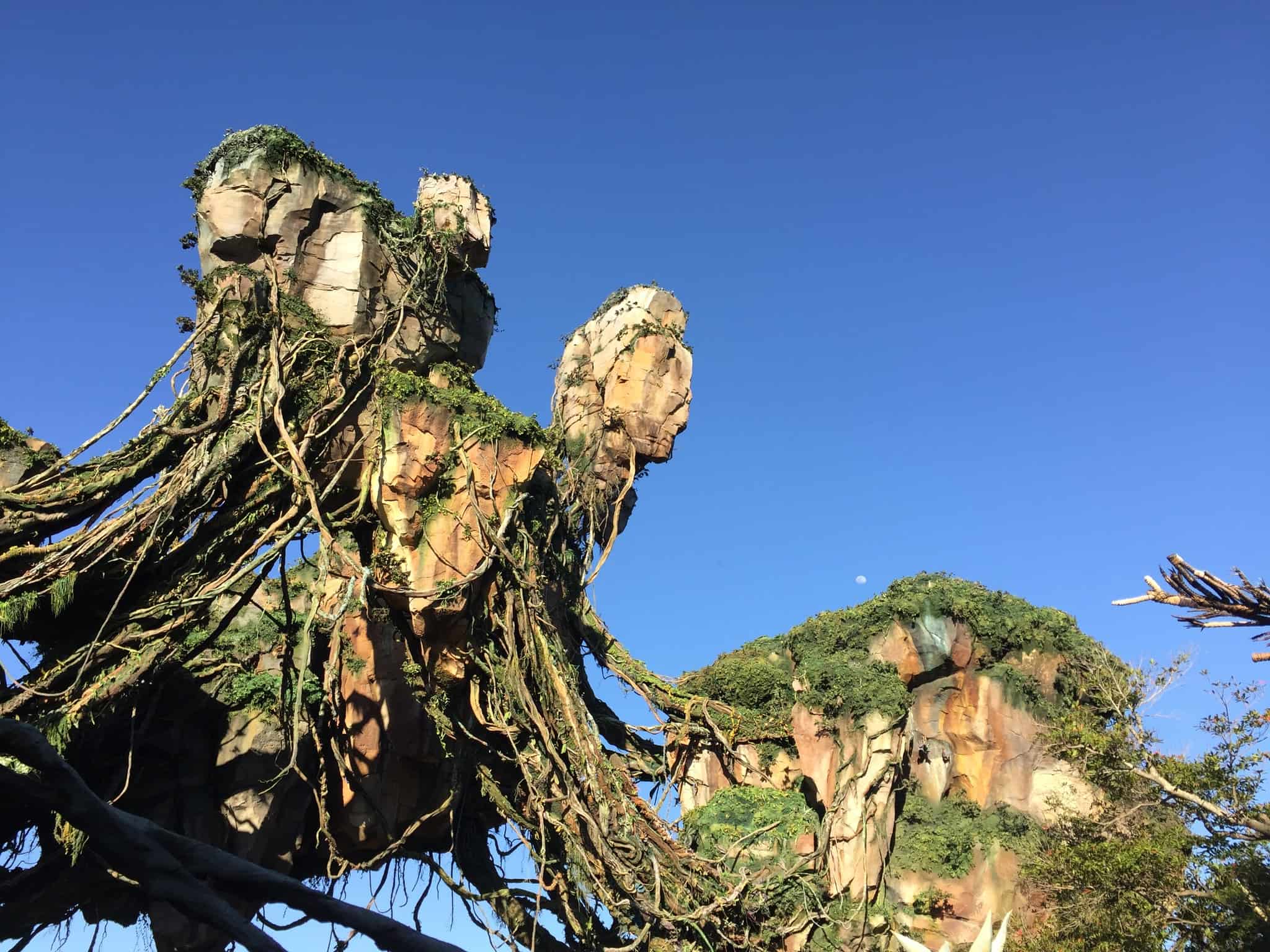 Every inch is covered in detail with no space left unattended to. Alien plantlife is everywhere, water features abound, military base ruins are scattered throughout, and impressive rock work covers the landscape. Even silly things like cast member-only access passageways have speakers that play noises like water dripping in a cave, or various animal noises. I swear, if there was something un-themed or that showed signs that we were in a Disney theme park, I couldn’t find them. 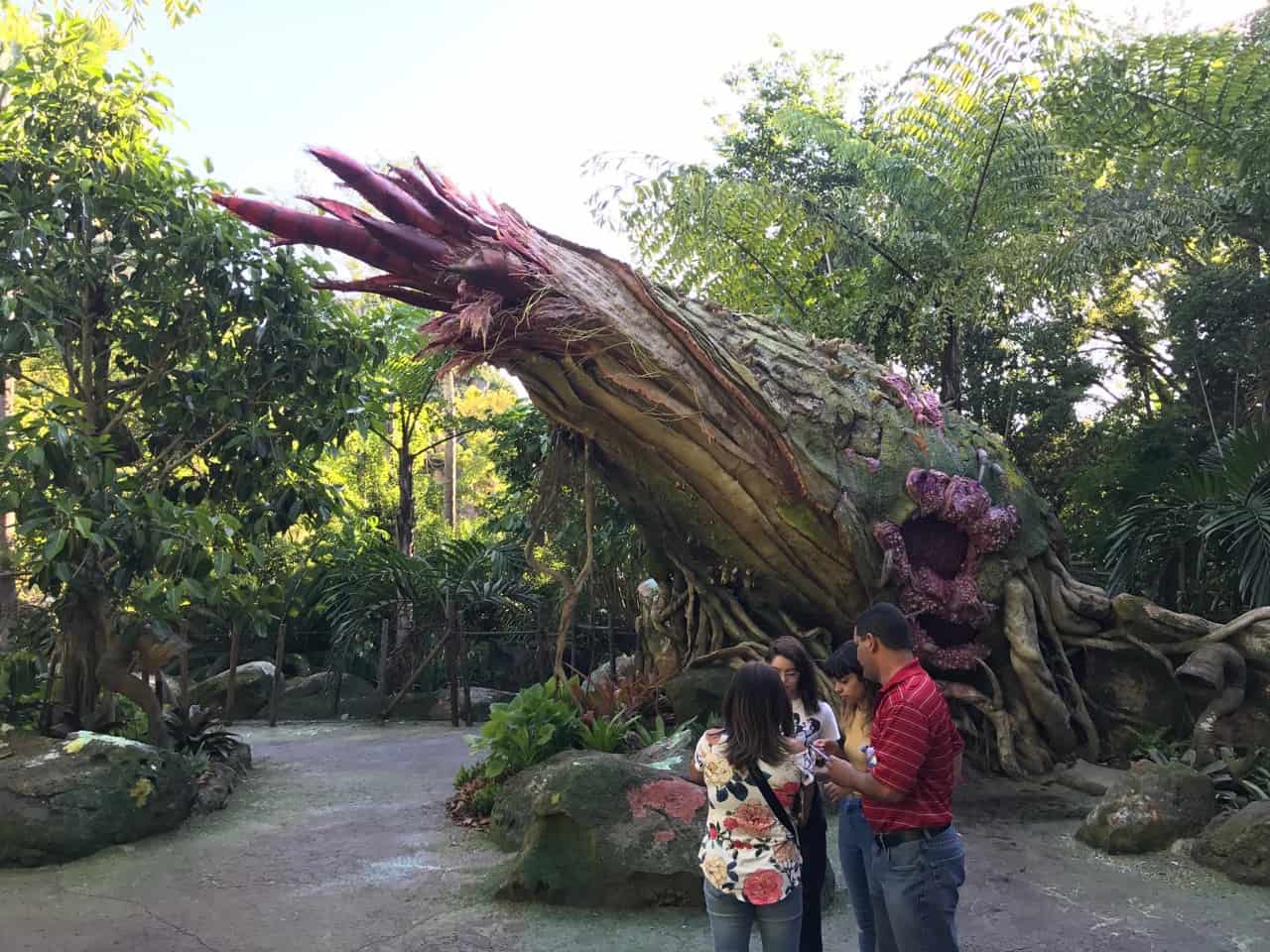 A few weeks back, a source told us that there was no attraction signage for the attractions, and I was skeptical as to how this would work. This is actually true in that there are no marquees for the two rides, but the ACE company has set up what look like temporary stations to guide guests into these experiences. Queues are filled with ACE branded lighting that appears to be temporary and cast members who are trying their hardest to keep you in the story at all times. 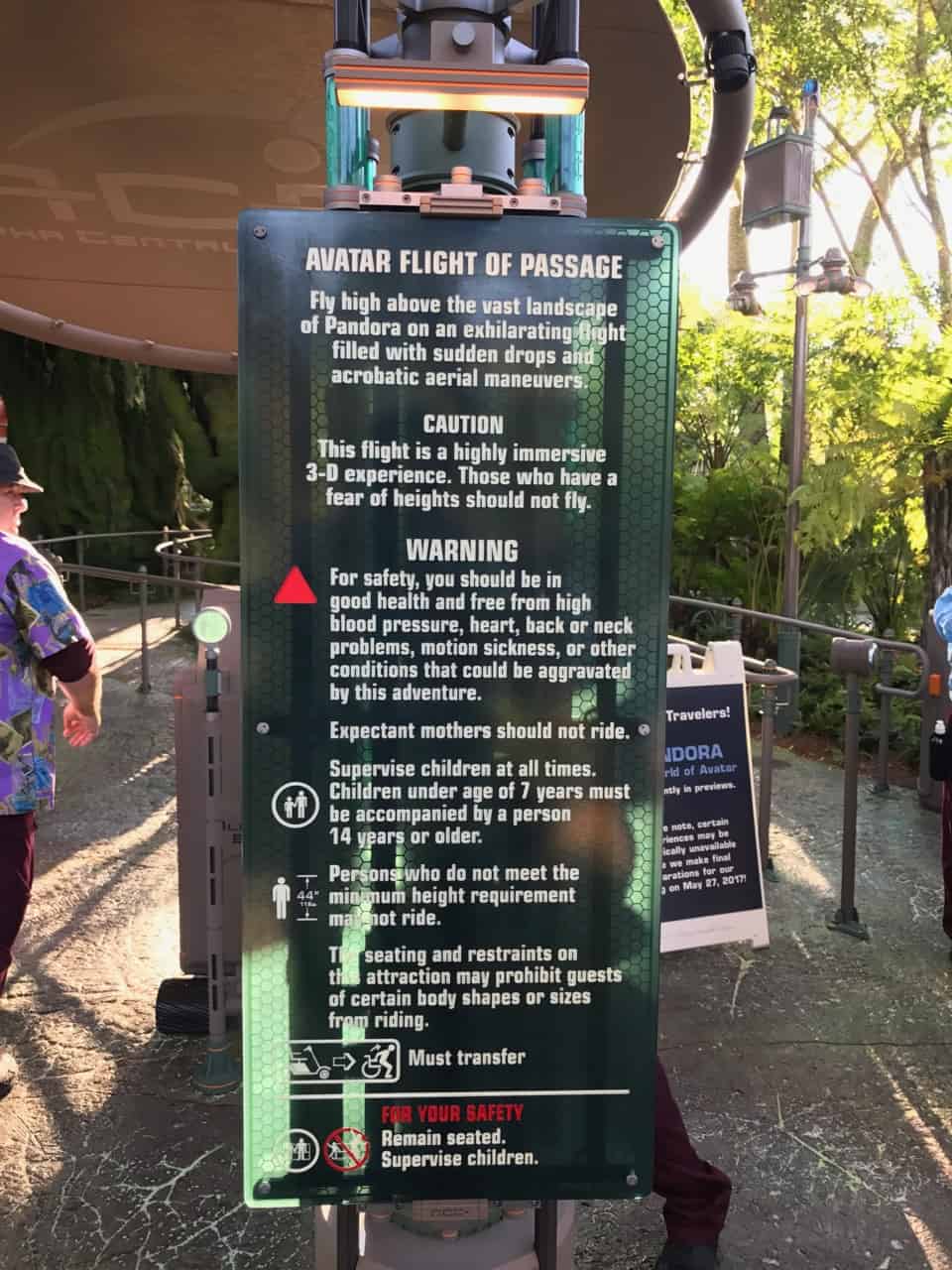 No signs of Mickey Mouse are present on Pandora either, as it is the first themed land constructed without Hidden Mickeys. Even the FastPass+ readers have Alpha Centauri Expedition logos rather than Mickey Mouse icons. 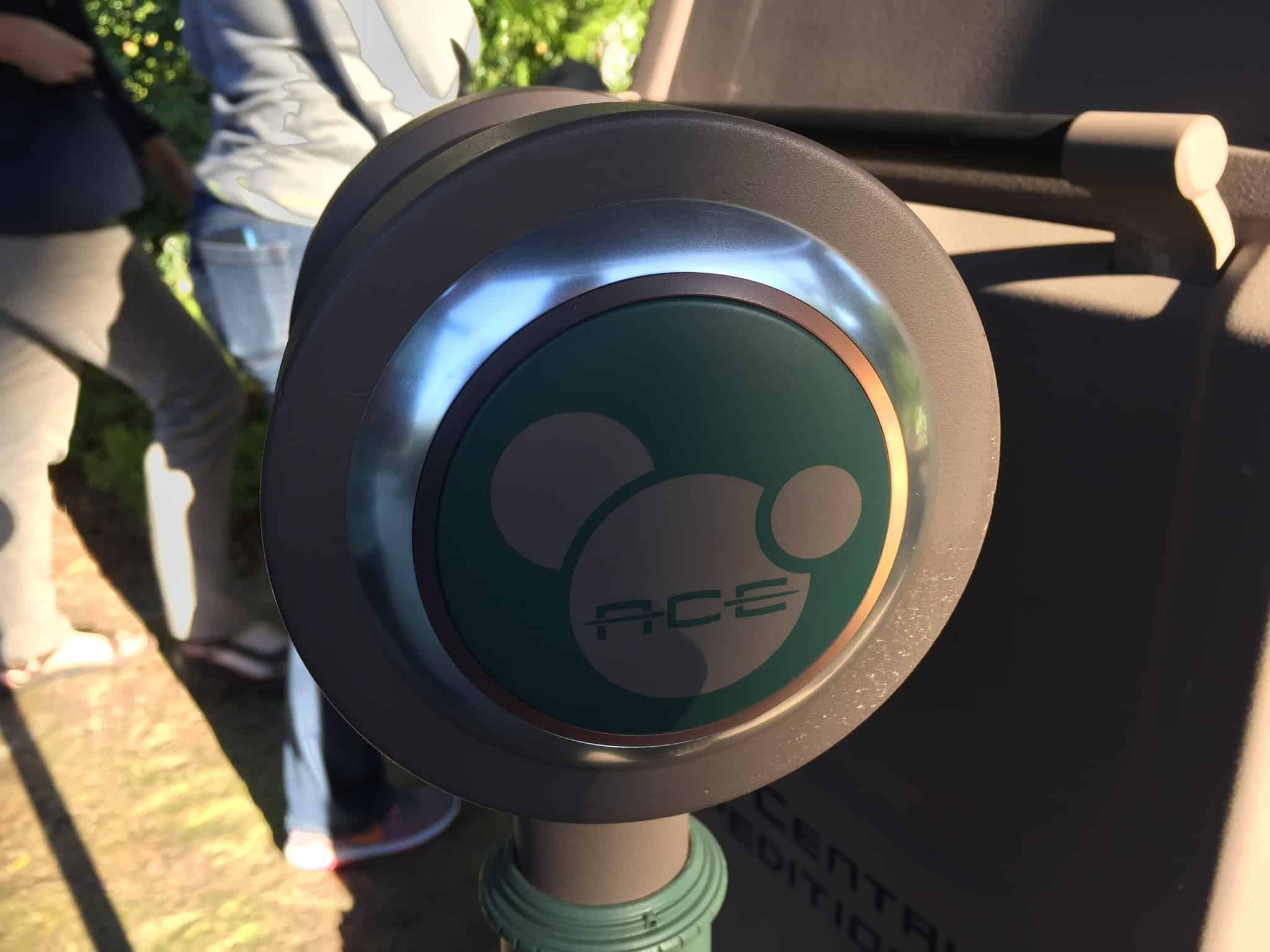 Beyond that, we found some fun diversions, including an interactive drum circle, a large plant creature that reacted to touch, and strange alien animals who squirt water at guests. This is what theme parks are all about. I love these little things you can do between rides and eating that are unexpected, but decidedly cool and fun. 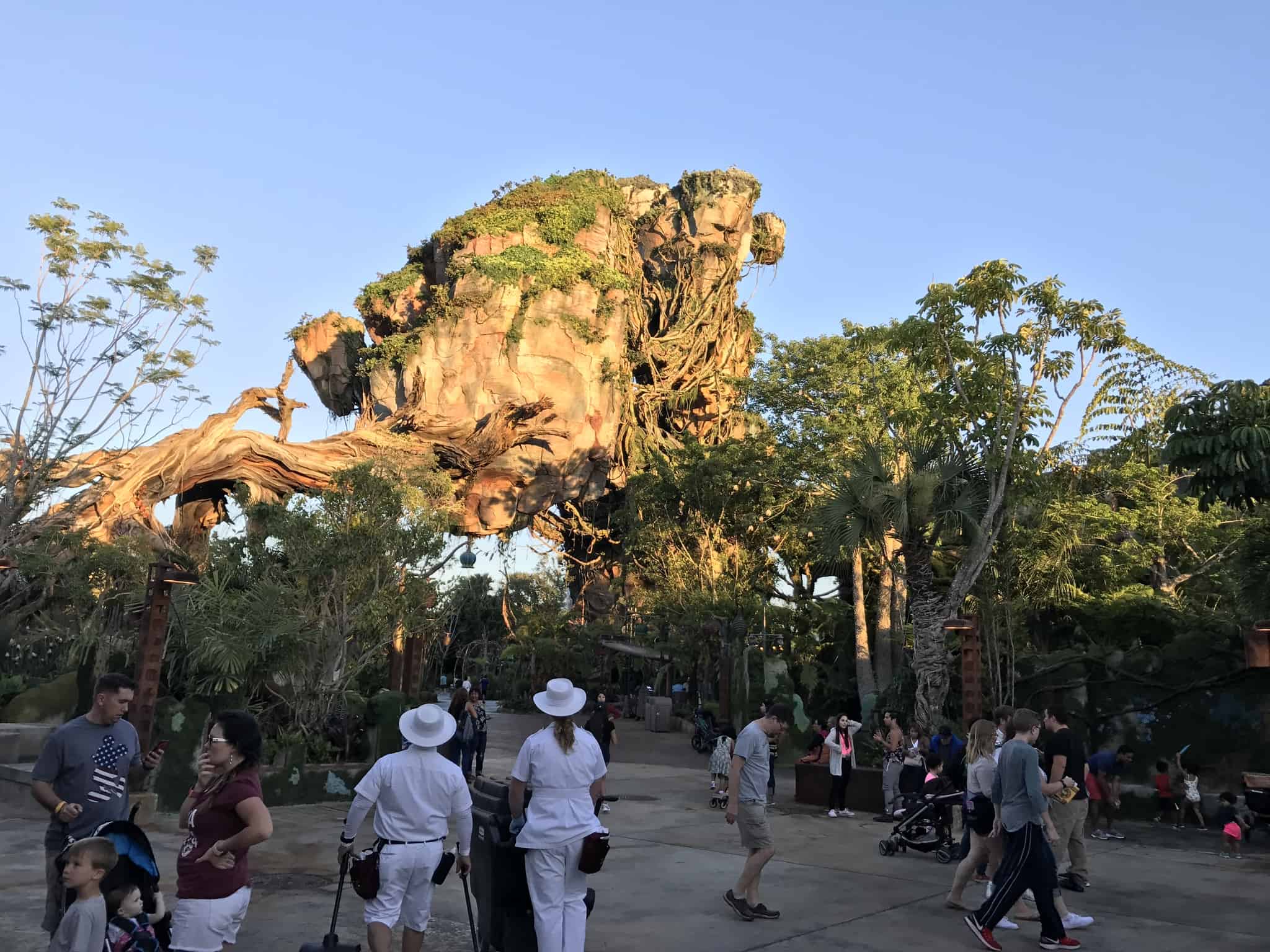 Despite not having the charm of a small town around Route 66, I found myself wanting to just stand or sit around and watch the world of Pandora unfold around me. Picturesque spots with waterfalls, raised observation areas, and secondary pathways offer plenty to explore and an atmosphere so pleasant that it’s hard not to get caught up in it. I can forsee a lot of days where I will be grabbing a drink at Pongu Pongu and just walking around the land, watching the flurry of activity from guests, cast members, and entertainers alike. Although, the pathways may not be big enough for the expected crowds, but we’ll see, I guess…

I did find some charm in the Pongu Pongu refreshment kiosk, but we’ll talk more about that later this week (and I’m going to yell about the missing hula skirt a bit). 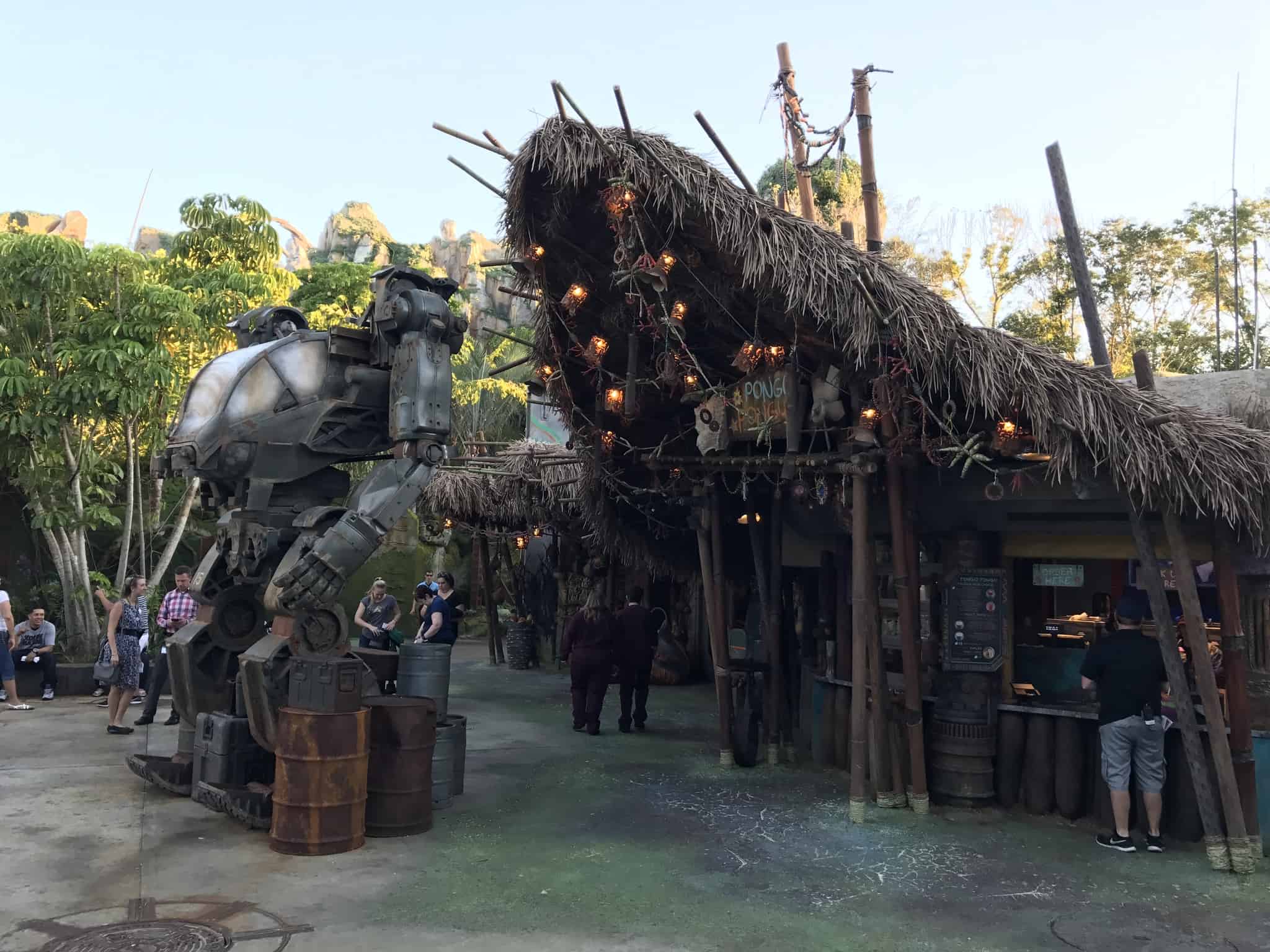 Initial reactions to the Navi River Journey have been underwhelming, but I found a far more positive experience than most. This isn’t a thrill ride, in fact, it’s Animal Kingdom’s first and only family-friendly dark ride.

The show sets are of the highest quality. There are many areas where the depth of the forest seems to go on forever, making you second guess just how big the scene around you really is. 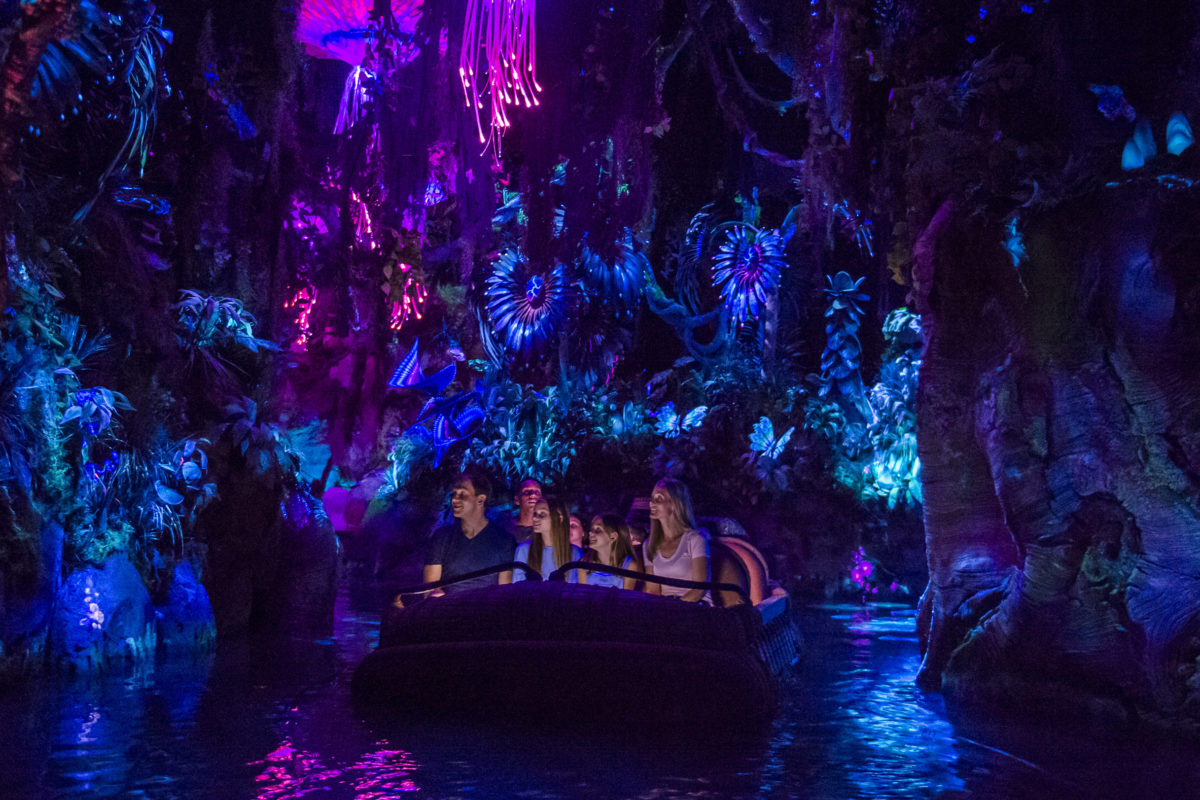 The projected animals of Pandora are somewhat underwhelming, utilizing the projection technology developed for the Finding Nemo Submarine Voyage and The Seas with Nemo and Friends over ten years ago, leading to moments where you can kind-of see through the creatures. That being said, the physical sets and some of the projection-mapping effects are second to none. I found myself arguing with my friends about the first Navi to appear in the ride and if he was a moving figure or a projection. He’s a projection, but one of the most convincing I have ever seen.

The ride isn’t flawless. It could probably use a few moving figures of larger creatures for sure, but it isn’t unenjoyable. This isn’t a showstopper and it really doesn’t need to be with the Flight of Passage next door. It serves a purpose for those who can’t ride the bigger thrill ride and adds ride capacity & variety to the park.

I like to think of but as Gran Fiesta Tour starring the Navi Shaman, and yes, that AA figure is as impressive in person as it looked on video. 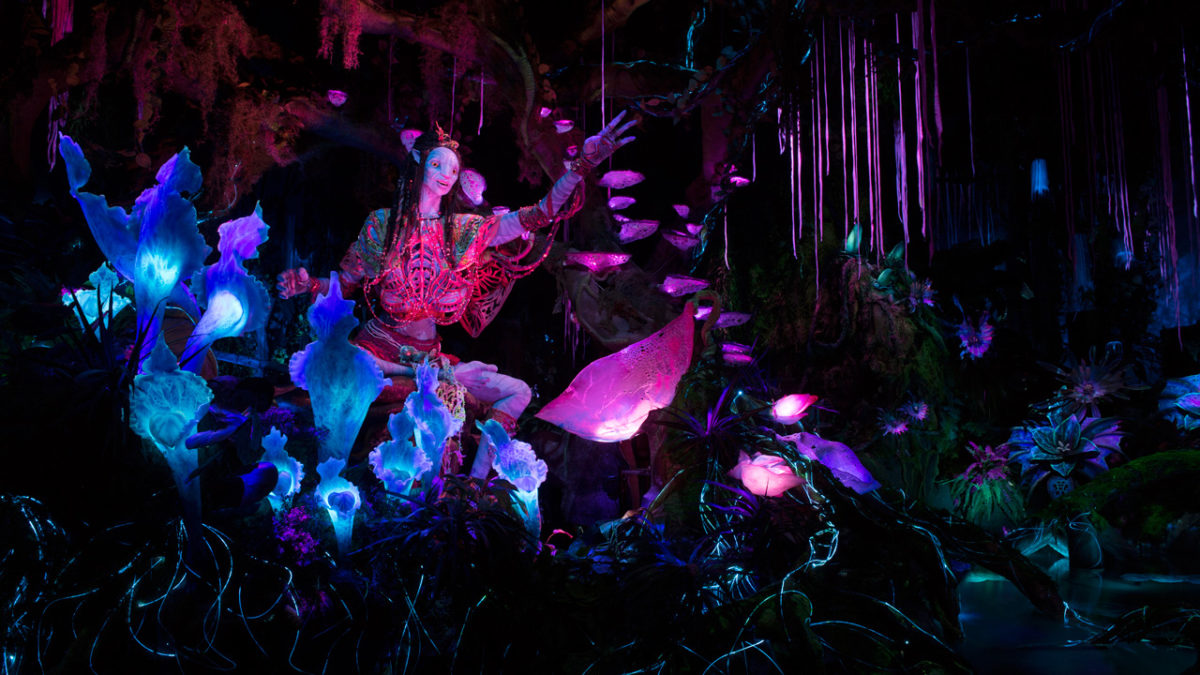 We have a full walkthrough of the queue and on-ride video of the Navi River Journey to share with you as well: 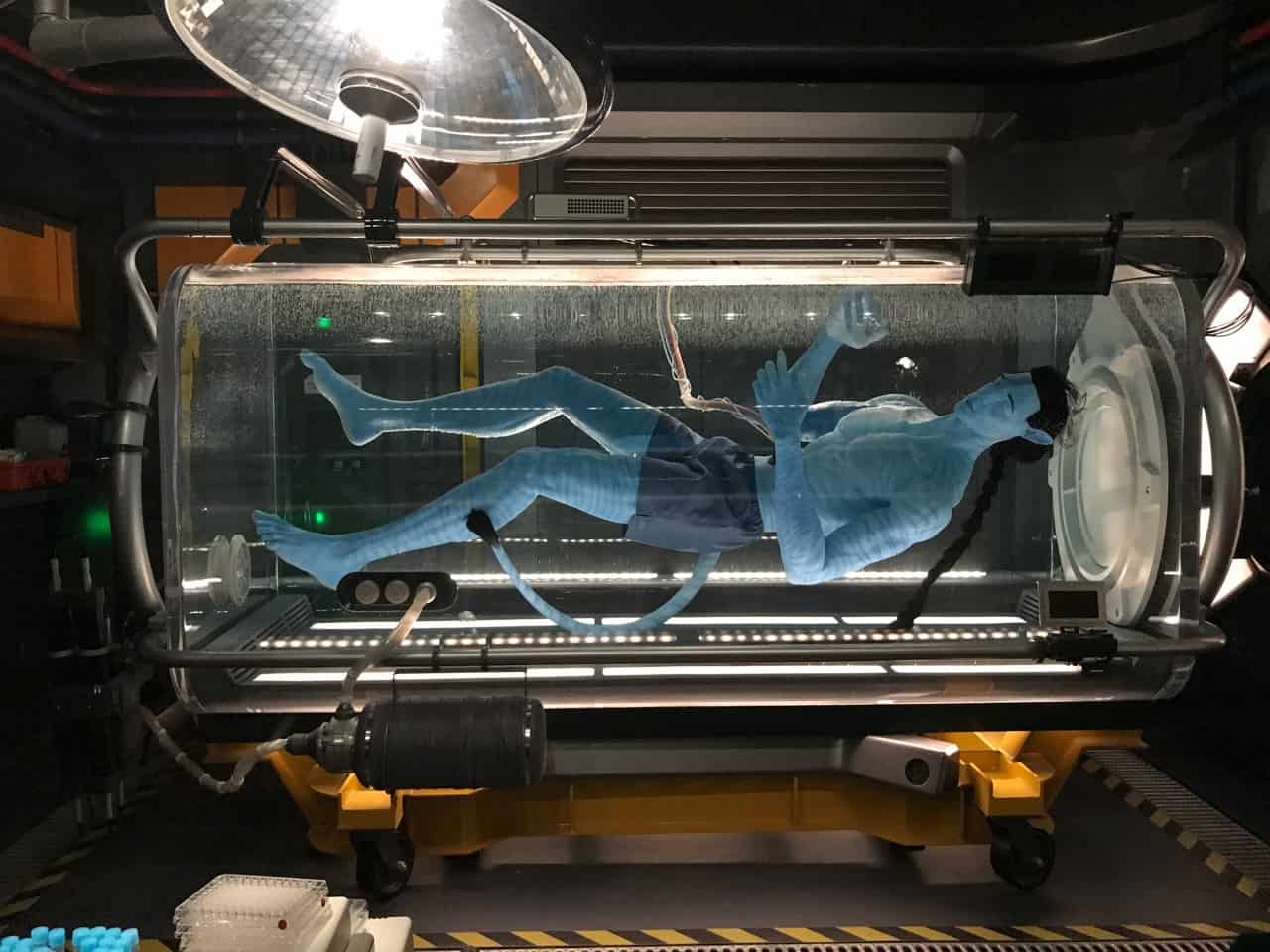 Since it is currently not fully operational, very few guests at each preview event have had the chance to ride the Flight of Passage attraction, but the queue has been available for walking tours. Walking this queue, I have one thought to share: be afraid, be very afraid. The queue is long, longer than any I have ever encountered. If you thought the line for the Indiana Jones Adventure at Disneyland seemingly went on forever, then you are going to be amazed as you weave through the 6-hours of inhabitable queue space that the Flight of Passage ride has available, if need be. Walking at a good speed through the entire queue with very little stopping took me about 10 minutes. 10 minutes to hike from the entrance to the pre-show area. That’s intense. 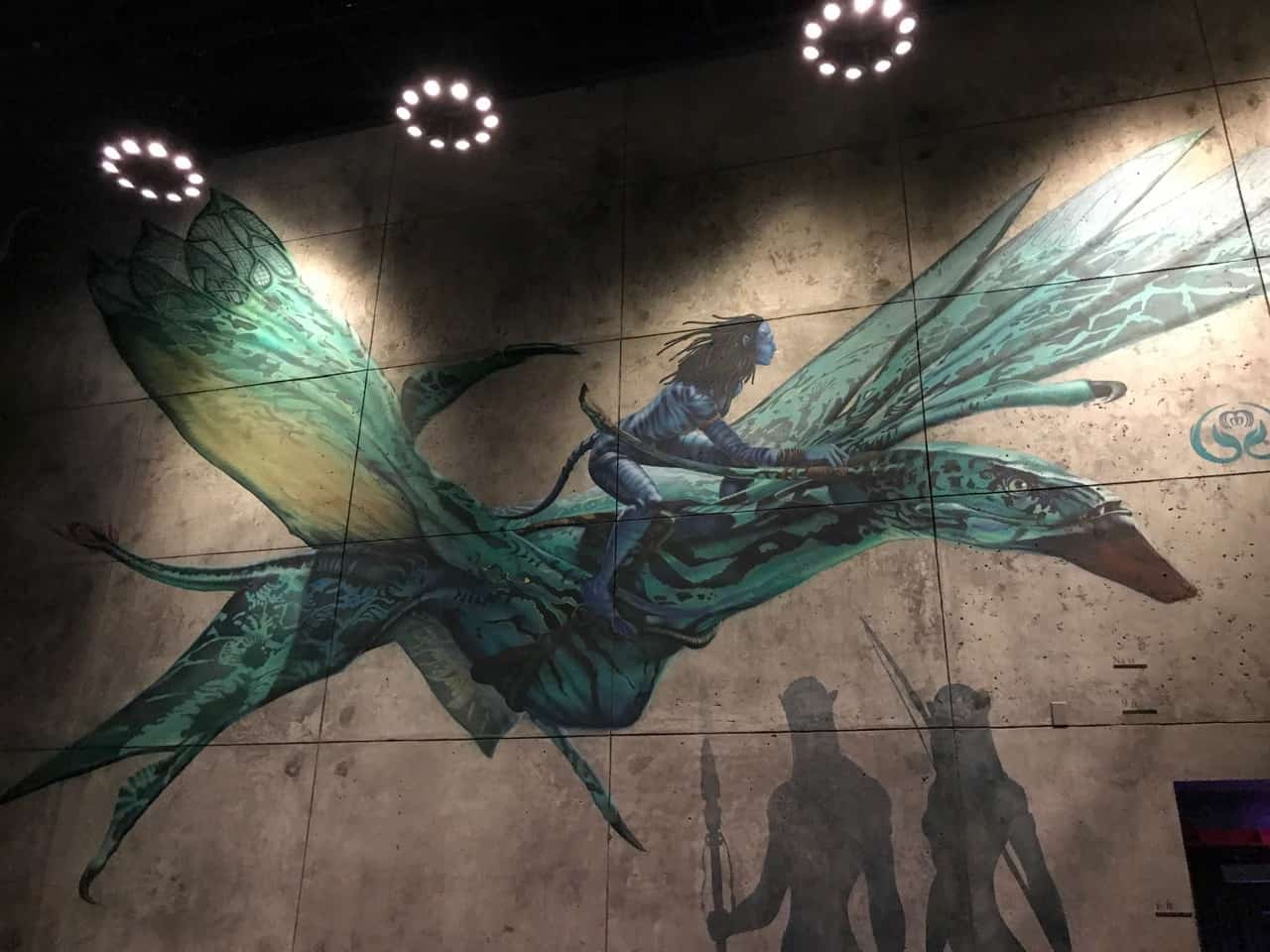 That being said, it might be the most well-thought out and immersive queue ever constructed for a theme park. The outside portion winds beautifully through the mountain range before taking you into the caverns where you’ll find massive cave paintings of Banshees. The queue then goes through the remnants of an RDA facility before entering the active research facility of the Pandoran Conservation Initiative. 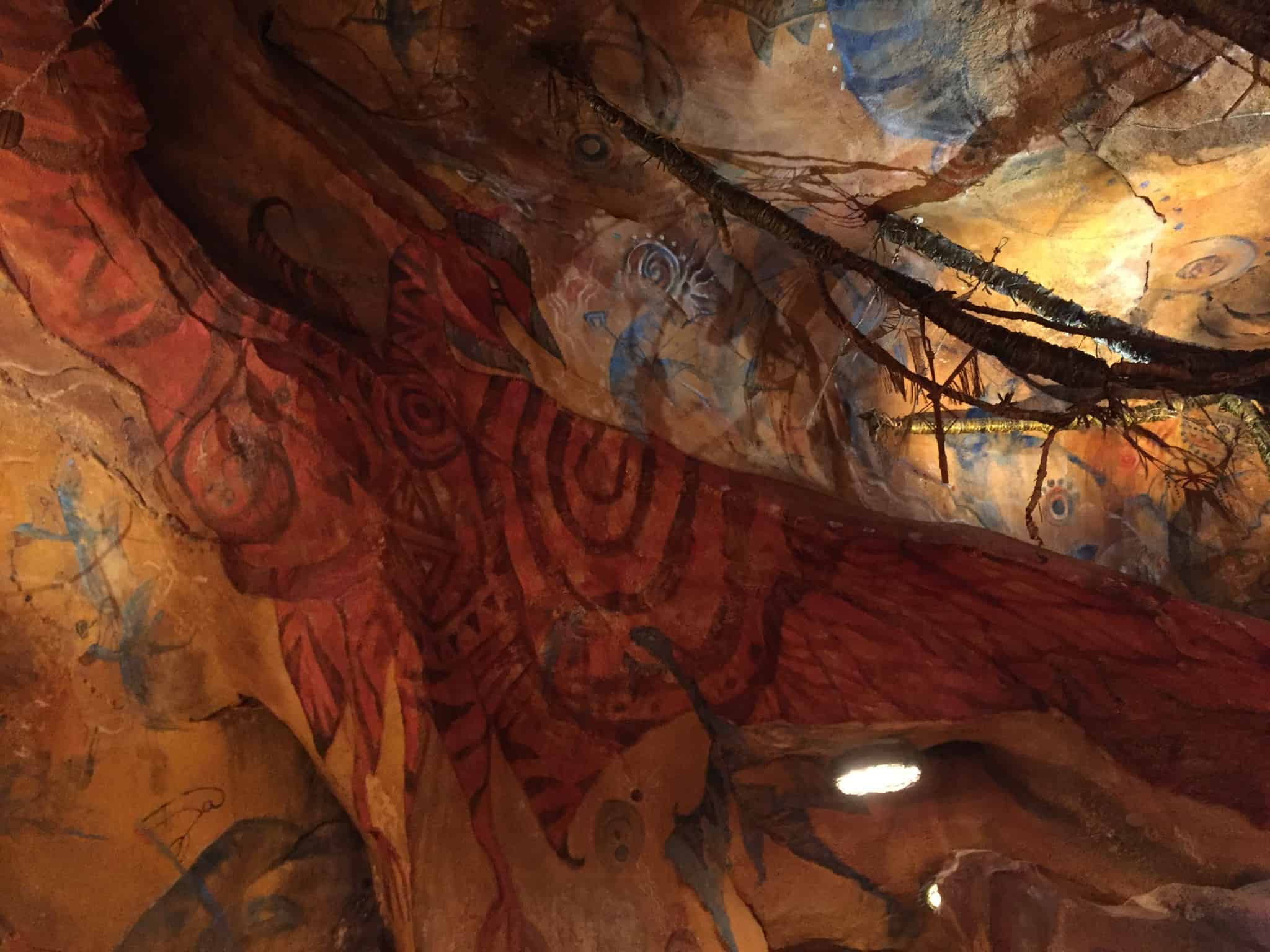 You can walk through the entire queue in our video below:

One thing Pandora is not short on is unique merchandise. I can’t express the excitement I felt to walk through an entire store that carries merchandise I have not seen anywhere else at Walt Disney World. Every inch is covered in unique offering you’ll only find here, making a shopping trip to Pandora something very special.

With how hard it is to find merchandise not shared between the Disney Parks around the world these days, a shop with items that can only be found in the land (and apparently will never be offered through the Shop Disney Parks app or DisneyStore.com) is incredibly refreshing.

Despite my hatred of the film, I was quite enamored with a fair amount of the merchandise. I’ll honestly need an entire post just to talk bout how cool some of the items were. That being said, for every cool item, there is probably something that will never sell, but hey, that’s a much higher success rate that we expected. 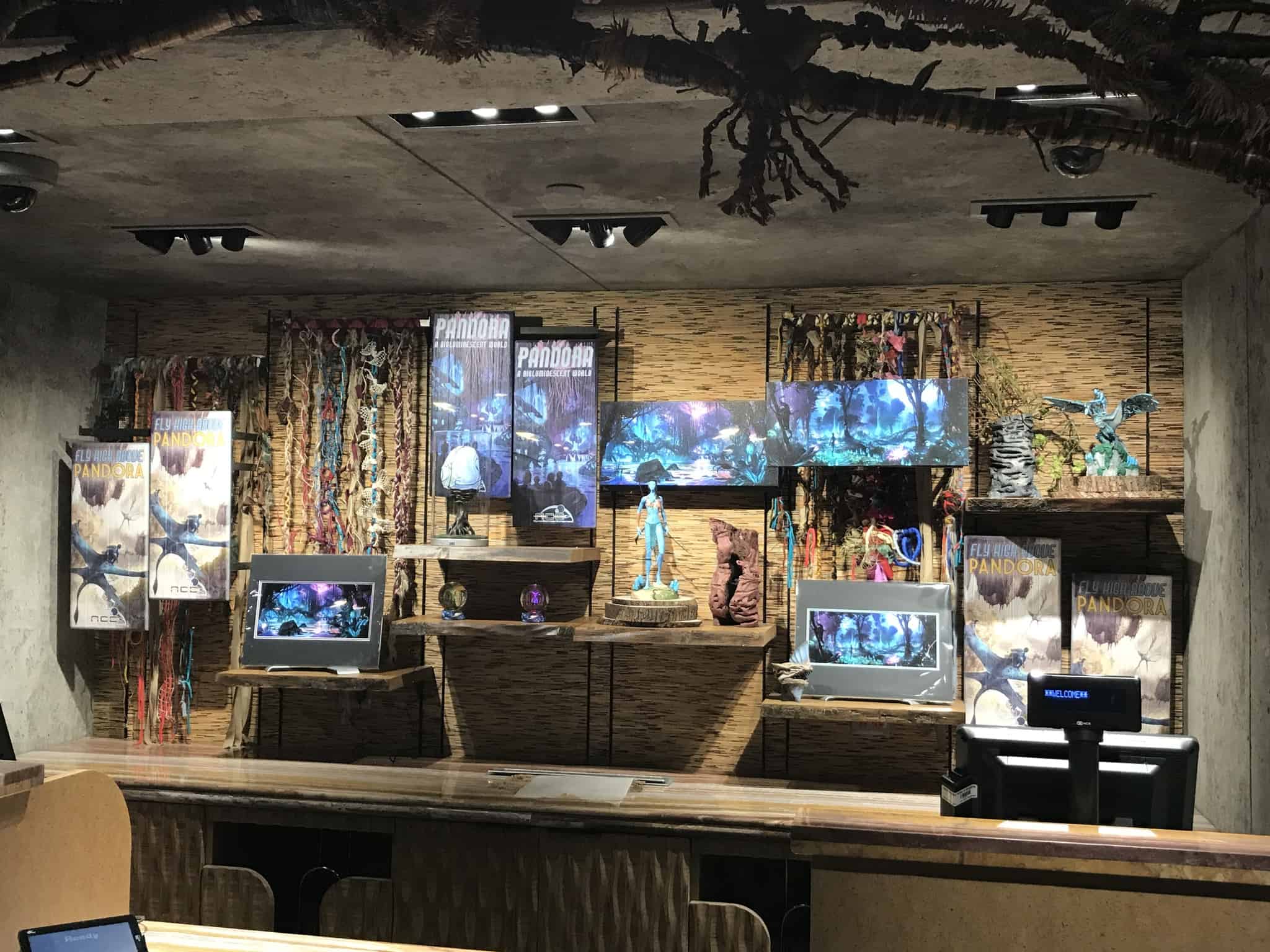 There is also a face painting station called Colors of Mo’ara, if you are so inclined. 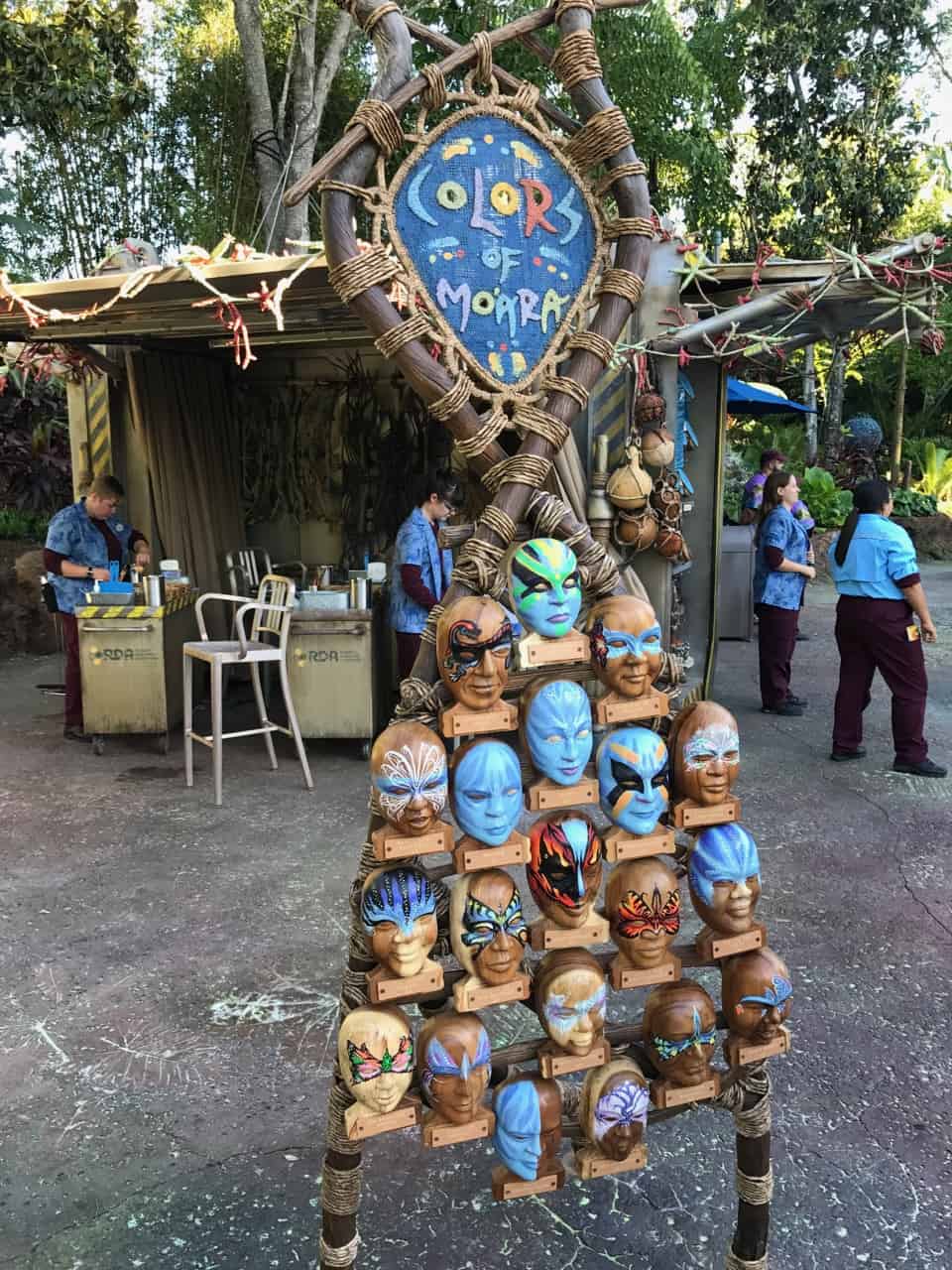 While I still need to ride the Flight of Passage and dine at the Satuli Canteen, it is clear that Disney and Cameron have succeeded. Disney took a movie franchise with almost no fandom and little affection from the general public and built something very special with it. In many cases, we complain that some movies don’t work well as theme park attractions because you have to try and tell the story in a very truncated format (because, let’s face it, very rarely do we get original stories based on movies rather than film retellings). In this case, we have a film with very little substance that honestly seems like it was made for an in-person experience rather than a near-3-hour film. I recall riding the Haunted Mansion or seeing the Country Bear Jamboree and thinking, “How are they going to make an entertaining movie out of this?” With AVATAR, If the theme park land had come first, I would have wondered the same thing. 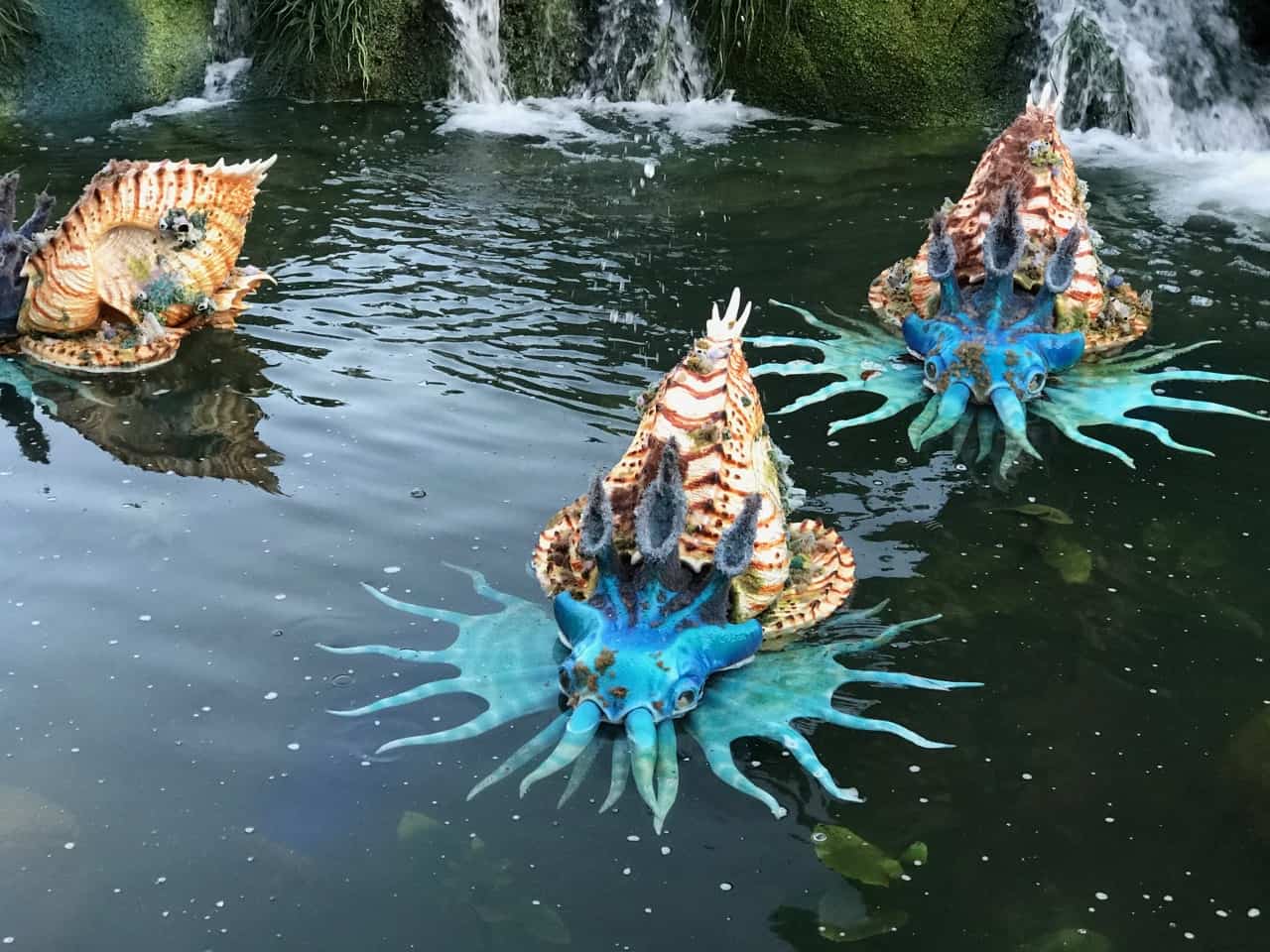 Disney Imagineering has honestly made their critics of the last 6 years look pretty silly, providing an experience at a level seldom seen in many theme parks. The Harry Potter lands at Universal Orlando and Cars Land come to mind, and this project has all the feel of those. The size, the scope, the level of detail, the number of different types of offerings available to guests, they’re all there. Provided Flight of Passage delivers and Satuli Canteen is at least edible (both big “IF”s, trust me), I think this is an incredibly important addition to Disney’s Animal Kingdom that may make it the premier park at Walt Disney World (at least until 2019 and the opening of Star Wars Land). Don’t get me wrong, the Magic Kingdom is wonderful and amazing, but it lacks a large-scale experience with this level of immersion and detail, something that audiences seem to crave at this point in time. 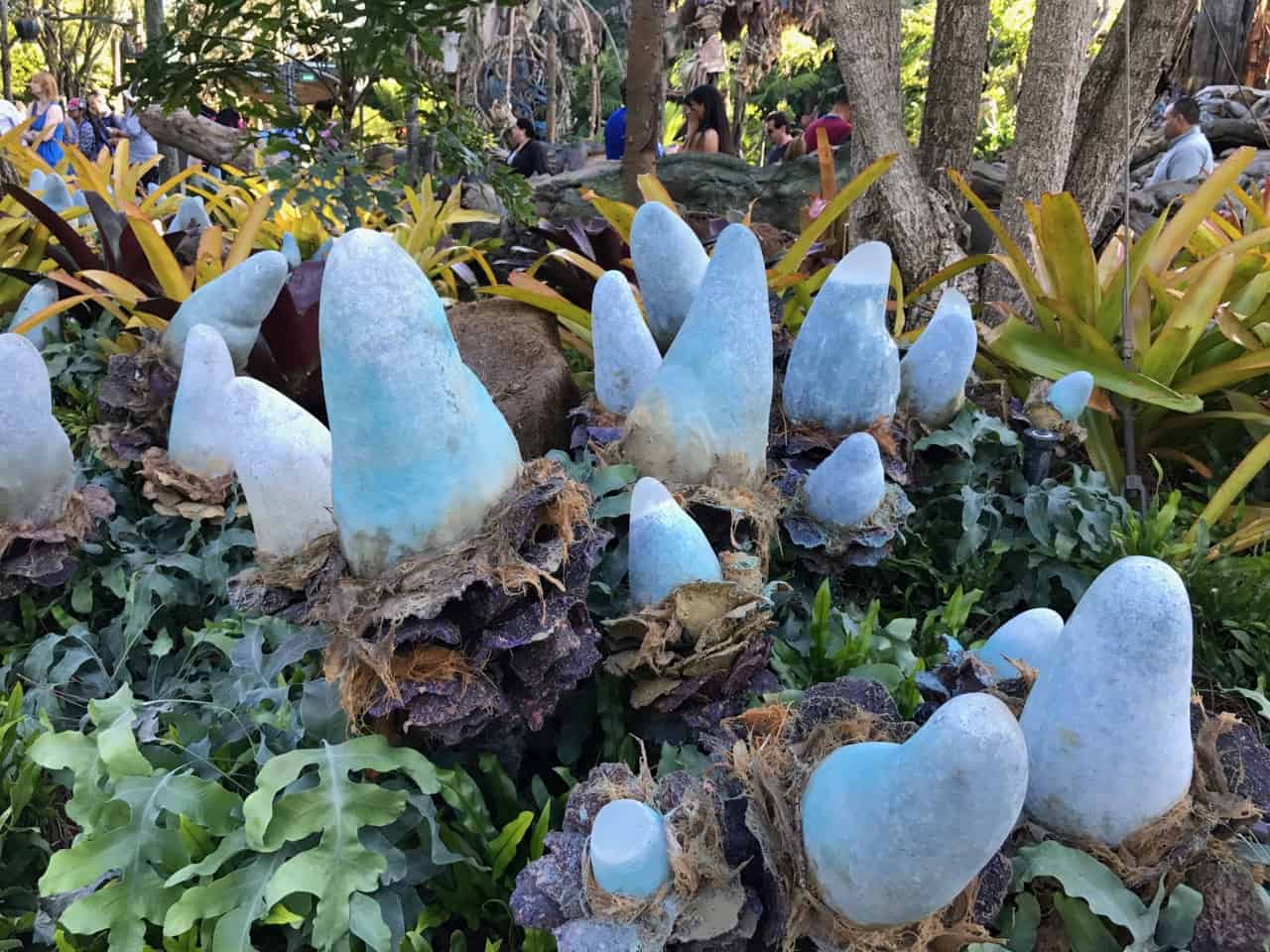 Pandora: The World of AVATAR does more to connect audiences with this franchise than the movie’s 3-D gimmickry ever could.

Stay tuned as later this week we review the drinks and snacks of Pongu Pongu, the Banshee Rookery experience, and I talk about seven things we like and dislike (so far) about Pandora: The World of AVATAR at Disney’s Animal Kingdom.

28 thoughts on “REVIEW: Initial Thoughts from Inside Pandora – The World of AVATAR at Disney’s Animal Kingdom”