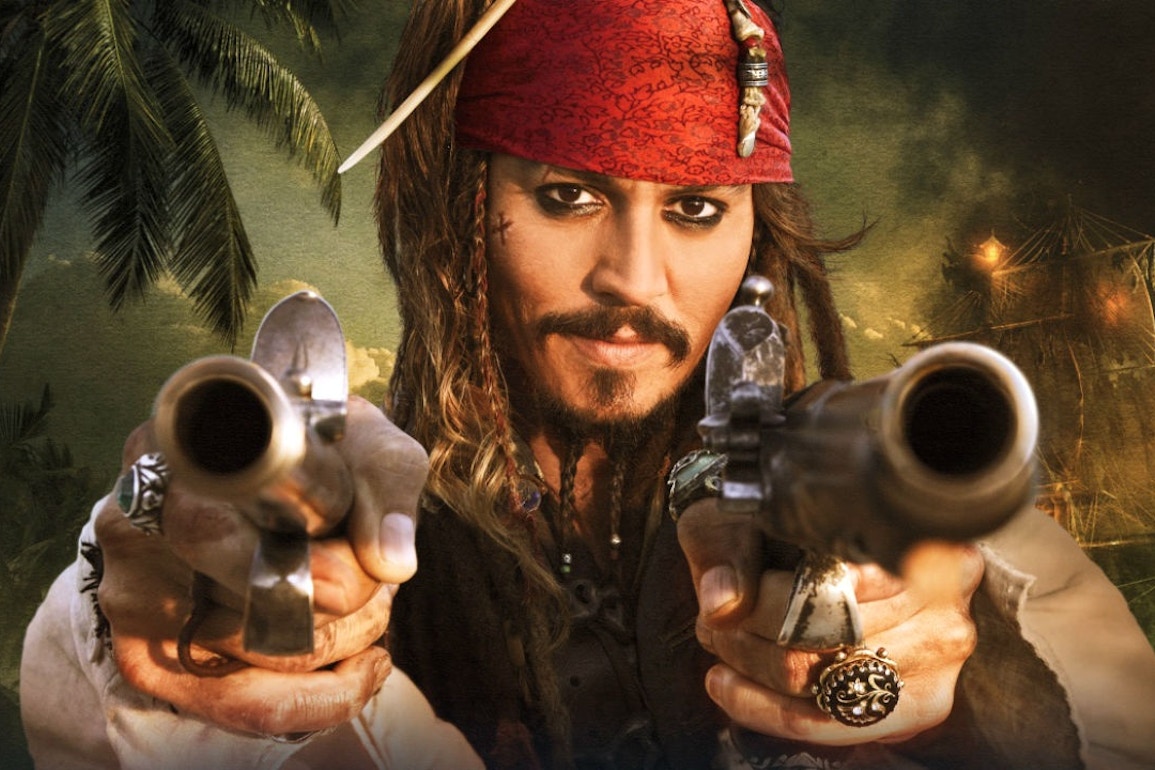 REVIEW: “Pirates Of The Caribbean: Dead Men Tell No Tales” is a Blockbuster Shipwreck

Definitely Fun At Times…. But At Times Feels Like Dead Men Walking Instead Of Telling No Tales… 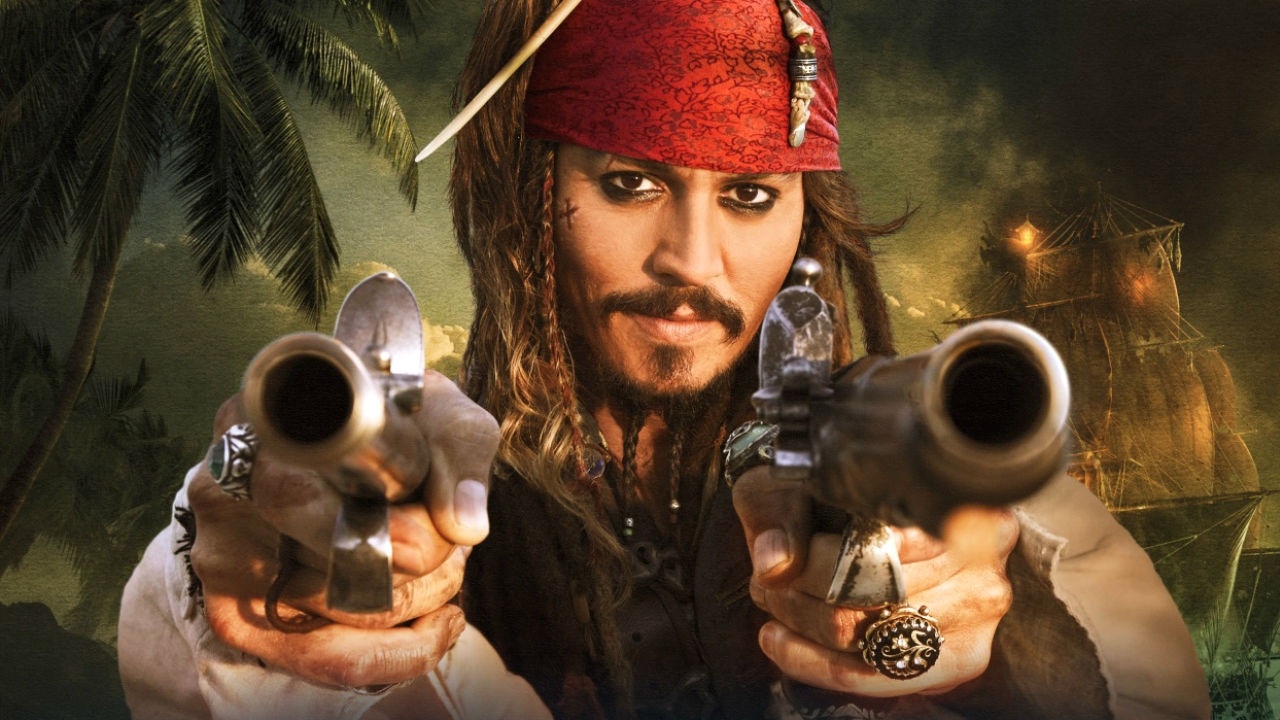 Like many of you, I have been a fan of the Pirates the Caribbean franchise ever since the first film, The Curse Of The Black Pearl, opened back in 2003. The Curse Of The Black Pearl just got everything right. It had the perfect cast, excellent directing, a fun and exciting story and one of the most memorable musical scores that we had heard in a long time. It really is hard to imagine anyone else playing Captain Jack Sparrow but Johnny Depp. Depp was perfectly cast as Jack and his performance helped create an iconic Disney legend. I think most people would not argue that Captain Jack Sparrow is one of the most recognizable movie characters around the world, and if not that, then he is definitely the most recognizable pirate.

With that being said, it pains me to say that Dead Men Tell No Tales is, in my opinion, the worst entry in the Pirates franchise. To me, the first movie is a classic and beloved by critics and fans alike. I also enjoyed both Dead Man’s Chest and At World’s End, both of which went in some really strange directions, but most fans stuck with the trilogy because we loved the characters such as Captain Jack, Barbossa, Will and Elizabeth, and of course the amazing CGI marvel that was Davey Jones. More importantly we wanted to see how their stories all ended. Many people consider On Stranger Tides to be the worst of the sequels, but I also enjoyed parts of that movie too. Dead Men Tell No Tales just didn’t do it for me.

Dead Men Tell No Tales starts off with a young Henry Turner believing in his heart that he can lift the curse that forces his father (Orlando Bloom) to be the Captain of The Flying Dutchman for all of eternity. Henry (Brenton Thwaites) goes on a quest to find the legendary Trident Of Poseidon, in hopes that the Trident may reverse his father’s curse. Henry teams up with a beautiful astronomer, Carina Smyth (Kaya Scodelario), who has her own reasons for finding the Trident. In order to accomplish this task, they need the help of Captain Jack Sparrow (Johnny Depp) and his trusty compass. Jack is now down on his luck, without a crew and being pursued by his old nemesis, Captain Salazar (Javier Bardem), and his crew of deadly sailors, who will stop at nothing until Jack Sparrow is finally dead. Will Captain Jack Sparrow survive this time in his final adventure (yea, right) ?

As a Pirates film, it’s not all bad. There is plenty for a Pirates fan to enjoy. I’d say that the first hour is quite good and I was really optimistic that we were going to get a return to form that may have actually come close to original. There is a bank heist by Captain Jack and his crew that is probably the highlight of the film. I won’t reveal much, but it is just a perfectly timed and executed scene that is fun and very original. Jack also has a hilarious near-death scene that will leave everyone laughing. We also get another wonderful job of de-aging an older actor, Depp, into a younger version of himself. Until this, I felt that Kurt Russell being altered to appear as a 30 year old version of himself in Guardians Of The Galaxy Vol 2. was probably the best use of the de-aging process I had ever seen. The scene where Depp is shown as a teenage Jack Sparrow (which is in a trailer also) is pretty damn close, and I’m sure if I saw it again, a young Jack Sparrow may actually top what I saw in Guardians. Regardless, this flashback scene adds a lot to the character, and has a pretty awesome reference to the Disney Parks attraction. 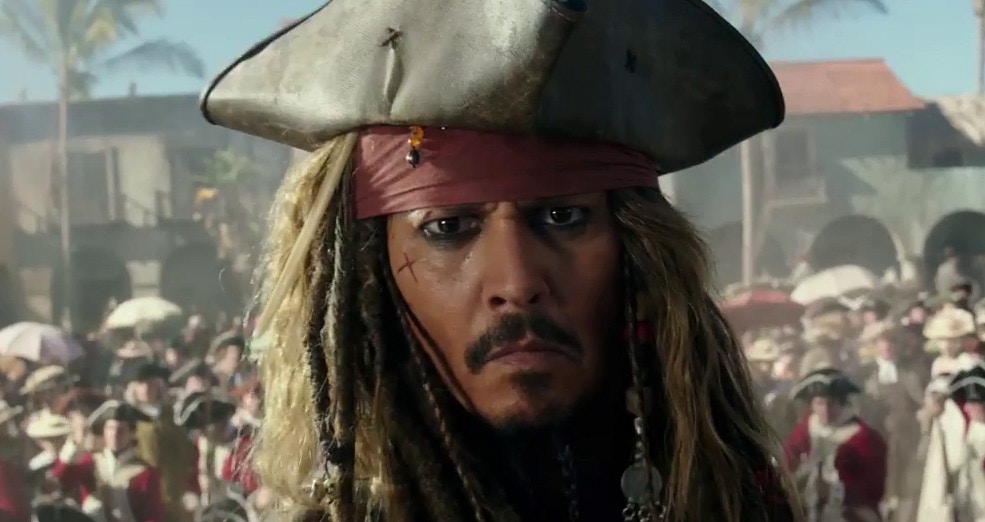 So with the good out of the way, on to the bad. It’s not a very good movie. It kind of reminds me of The Transformer movies. People will go see The Transformers movies regardless of how horrible the script and the acting are, but they consistently make a ton of money, so the studio doesn’t put much effort into it. That’s kind of what we have here with Dead Men Tell No Tales. Yes, it’s great to see Captain Jack and Barbossa back, as well as a ton of familiar faces that we have seen throughout the franchise, but the film really, really drags, especially in the last half of the film. Depp does a great job as usual of playing Sparrow, but it seems like Sparrow is a drunk for most of the film. Maybe that is how he is portrayed in the other ones too, but that act is growing stale. I would have liked to have seen Jack sober up at some point and show some leadership and courage instead of accidentally surviving in scenes due to him being inebriated.

The new cast characters introduced in this film, Henry, played by Brenton Thwaites and Carina, played by Kaya Scodelario, really don’t add anything to the franchise. It’s like they are setting up Pirates: The Next Generation. Yeah, that’s right, it’s another “soft-reboot”.

Both actors are an obvious replacement for Orlando Bloom and Keira Knightly, and not really good ones. Not bad, but they don’t do anything to make you want to see their continuing story. The pair also severely lack any on-screen chemistry. The character of Carina uses astronomy to guide herself and the crew to where the Macguffin of the film might be, and it just seems like she does it way too many times and it takes for everything to fall into place. It’s just boring and so similar to the hunt for the Dead Man’s Chest and Davy Jones’ Locker in the older films. Carina also refers to herself as horologist, which is misinterpreted by the crew, and it’s just a way to show how unintelligent the pirates are around her. The joke goes on for way too long, and then they then bring it up again with hopes that the audience found it funny the first time. Javier Bardem does a good job playing Salazar, but we have kind of seen this story before with Davey Jones and Blackbeard, where Jack is being chased by one of his old enemies who is mad at him. 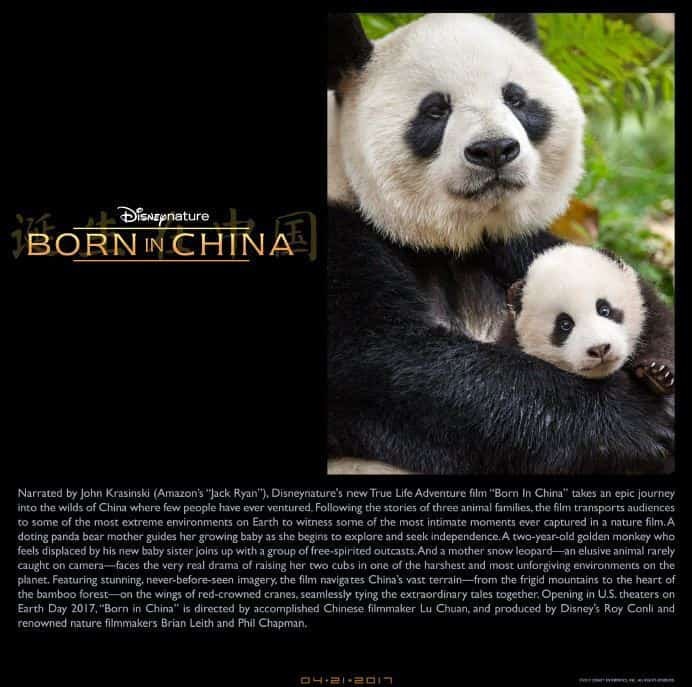 The biggest problem for me is the final act is a mess. It takes forever to get to the McGuffin, but once they finally find it, there is so much going on in that scene that you dont know where to look at times and what is happening and who is doing it. Plus it seems that no one really knows what the McGuffin does, so they just guess what it does, and that’s what it does. You are so bored at this point in the movie that you just don’t care who lives or who dies or what curse is broken and which one is not. You just want the movie to end, like it should have 40 minutes before. This movie is 2 hours and 33 minutes, but it feels much longer. There was no reason why this movie could not have been 2 hours and it probably would have been a better movie if it was. It’s just crazy at times how they stretch this stuff out.

SPOILERS: A perfect example is when Jack escapes Salazar at one point, find himself on an island with an ex crew member from the franchise and is forced to marry the guy’s ugly sister. This goes on for 10 minutes and Barbossa shows up kills some people and Jack goes off running again as if that wedding never happened. It’s a funny scene, but it was just not needed and just dragged out the inevitable. Also, like I mentioned, they just start making things up as the film progressed. Salazar decides to possess Henry and one of the crew says, “But If you possess the boy, you will never be able to leave his body”! And Salazar replies, “The Trident will probably fix things.” Really? At this point you are throwing the rules you made for the film out the window just to get to the ending you want. End Of SPOILERS.

There is also a lot of things going on. The British Navy are after the pirates…again. Salazar wants Jack. Salazar wants Barbossa. Barbossa wants Jack. Jack’s crew is with him, then against him, then with him again. What I still can’t believe that Disney executives, who had probably seen a screening of this movie last year, just put their stamp of approval on this without pushing for any changes.

One last complaint and that has to do with the trailers that have been released for this movie. This movie falls in the category in which the trailers give away way too much of the movie. If you pieced together the various trailers and TV spots, you would have been spoiled before you had even seen the movie. I think a perfect trailer for this movie would have been just Jack sitting in a chair (similar to what is in the Pirates ride), with his back to us, and it slowly reveals him to the audience and he just says, “I’m back!”. That’s all we needed, because most people had their minds already made up as to whether they were going to see this movie or not. Leave the good stuff for when we see the film. I did not need to see a young Jack Sparrow, Will and Elizabeth, and even Barbossa in the trailers. And I would have loved to have seen those skeleton sharks attacking Jack and Henry in the rowboat for the first time while watching the movie. Maybe I would have enjoyed the movie more if they didn’t spoil the movie so much. 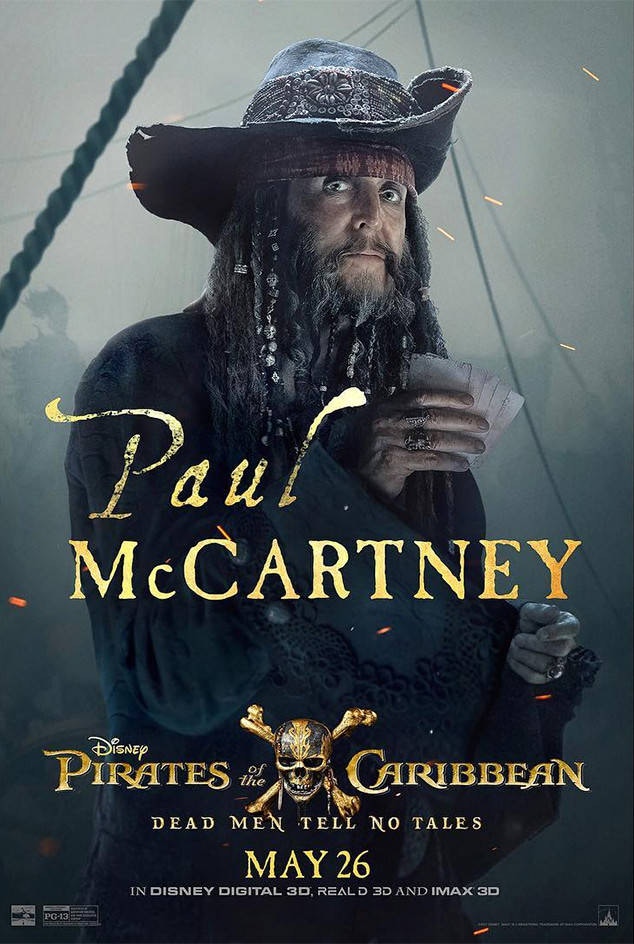 And did we really need to see Paul McCartney before the movie came out? The scene he was in was very good, but I would have loved to have seen him in the movie first and then find out later on that it was him. Like maybe in the credits?

And speaking of credits, there is an after credit scene, and I mean way after the credits have ended. I really liked it and it was a bit of a surprise, but after how the film ended, it just doesn’t make sense. 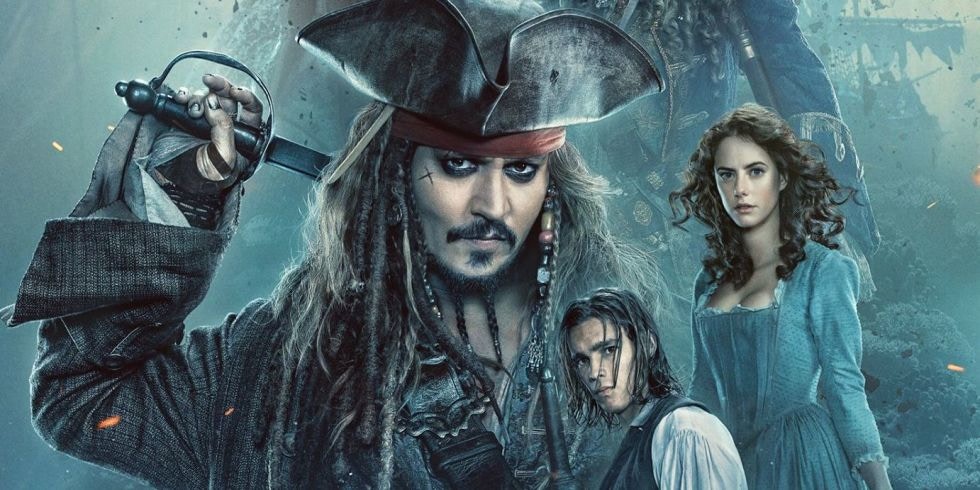 I love the Pirates movies, and from time to time, I go back and rewatch all of them and I still enjoy each one of those movies for what they are and what they represent to the franchise. I can’t see myself ever re-watching Dead Men Tell No Tales. It just takes too long to get to the end. And maybe after seeing Dead Men Tell No Tales, you will disagree with me, but know that the guy sitting next to me, our fearless leader Tom Corless, felt the same way about the movie as I did, but had a matinee even far worse outlook on the film.

I give Pirates Of The Caribbean: Dead Men Tell No Tales a (very generous) 5/10, mostly for the 45 watchable minutes.

*A special thank you goes out to everyone at See It First for allowing Tom Corless and I to attend an advanced screening of “Pirates Of The Caribbean: Dead Men Tell No Tales”.

Previous
RUMOR: Paint the Night Electrical Parade Packed Up to Leave Disneyland, Where is it Going?