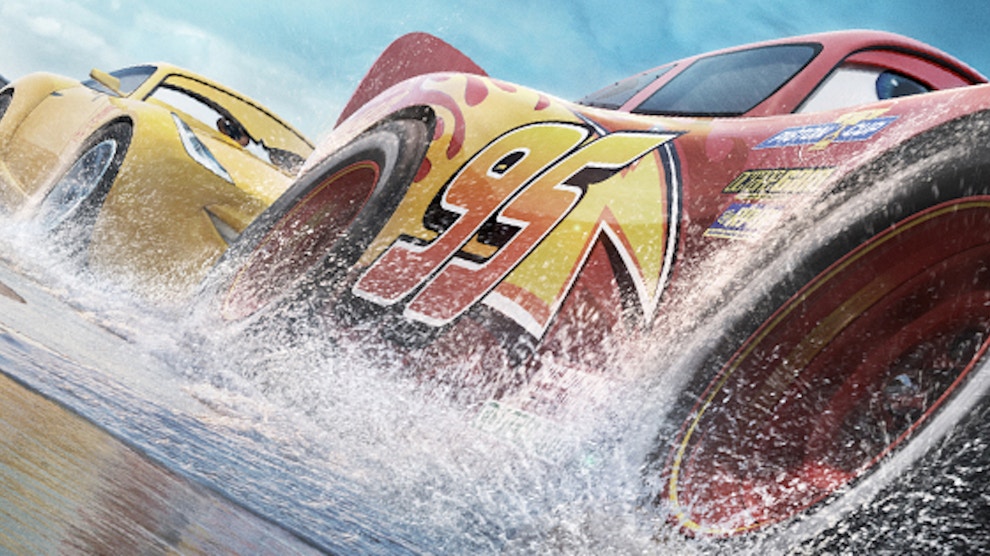 Admittedly, I am likely the biggest fan of the original Cars film released back in 2006. I loved the movie and have watched it dozens and dozens of times. I will be likely to tell you that the greatest moment of my life was getting to attend the grand opening of Cars Land at Disney California Adventure back in 2012, and to no surprise, my favorite theme park attraction currently is Radiator Springs Racers. My father and I have also collected the Cars toys from Mattel since the release of the original film, and we may or may not own nearly every little die-cast car that has been made in the toy line. So, might I be biased in a review of the movie Cars 3? Possibly, but let me say that I absolutely hate the film Cars 2 to assure you that I can be fair in my view.

I believe I have seen Cars 2 twice in my life and I pretty much refuse to watch it again. I like to pretend that it didn’t happen. It’s funny because I think that the Cars Toons and Mater’s Tall Tale shorts of a similar nature are all really fun and well done, but the film is just kind of a mess. Going into Cars 3, I was excited to see the series return to focusing on racing and being an animated sports movie of sorts. However, I was scared that one more failure would spell the end of my beloved Cars franchise. I am happy to say after seeing Cars 3 that the franchise is far from dead, and in fact, may have just produced the best film in the entire series. A film so good that I think many who are not fans of the the others may be making an emotional u-turn on their feelings about Disney-PIXAR’s Cars and its characters.

Blindsided by a new generation of blazing-fast racers, the legendary Lightning McQueen (voice of Owen Wilson) is suddenly pushed out of the sport he loves. To get back in the game, he will need the help of an eager young race technician, Cruz Ramirez (voice of Cristela Alonzo), with her own plan to win, plus inspiration from the late Fabulous Hudson Hornet and a few unexpected turns. Proving that #95 isn’t through yet will test the heart of a champion on Piston Cup Racing’s biggest stage! Directed by Brian Fee (storyboard artist “Cars,” “Cars 2“), produced by Kevin Reher (“A Bug’s Life,” “La Luna” short) and co-produced by Andrea Warren (“LAVA” short), “Cars 3” cruises into theaters on June 16, 2017.

Regardless of it being possibly better than the 1st, Cars 3 can not exist without the 1st film, regardless of how you might feel about it. Without the establishment of the original characters, the short moments of comedy provided by Luigi, Guido, Mater, and the other residents of Radiator Springs will likely be lost on the viewer. That being said, where I feel that comedy is the strong suit of the first Cars film, Cars 3 captures the heart often displayed in other PIXAR movies. Everyone in the audience was genuinely cheering for the heroes during the closing moments of the film, as it is hard not to develop an emotional connection to Lightning McQueen (Owen Wilson) and Cruz Ramirez (Cristela Alonzo) over the course of the 109 minutes.

Also, the background on Lightning McQueen’s career, regardless of it being recapped a few times over the course of this new entry, needs to be seen to understand the character’s progression. A viewing of Cars 1 might be necessary to fully enjoy the story that Cars 3 tells.

Cristela Alonzo’s portrayal of trainer Cruz Ramirez is the highlight of the film. The character exhibits genuineness, heart, and a likability which somehow transfers over to McQueen as their relationship rolls on, making him more likable even to audience members who are not fans of the other two entries in the series. Speaking of likability, the Mater character is kept to a bare minimum this time around, likely based on the feedback of viewers after Cars 2. While I love Mater, this was clearly the right move and the movie benefits from it greatly, while still keeping enough comedic moments to keep everyone engaged. The Jackson Storm (Armie Hammer)character makes for a fun new protagonist as well, basically playing the Lightning McQueen character as he existed at the beginning of the first Cars.

The training sequences between Cruz and Lightning, as well as the demolition derby portion provides the comic relief this time around, but the movie is most definitely more about the comeback of Lightning McQueen and his emotional growth that the entire trilogy has focused on. The story takes you to a place that you will probably see coming as an adult viewer, but is still emotionally satisfying for the film’s conclusion.

Cars 3 is more of a PIXAR film than any other in the series, and as much as I love the original film, I am almost certain that the general public will agree that this sequel is the very best of all three. Don’t get me wrong, Cars is still my favorite of the pack, but Cars 3 is all around the stronger film and connects much better to the audience. The story is uplifting and a good twist on the whole “Rocky” comeback saga, one that breathes new life into the series and pretty much guarantees that it will continue in some shape or form. Even if you are not a fan, I implore you to give Cars 3 a chance and go see it. I would be surprised if you didn’t enjoy it.

I’m glad this new one seems good. I didn’t like the second movie either and like to pretend it never existed.

Don’t let this positive review distract you from the fact that in 1998, The Undertaker threw Mankind off Hell In A Cell, and plummeted 16 ft through an announcer’s table.