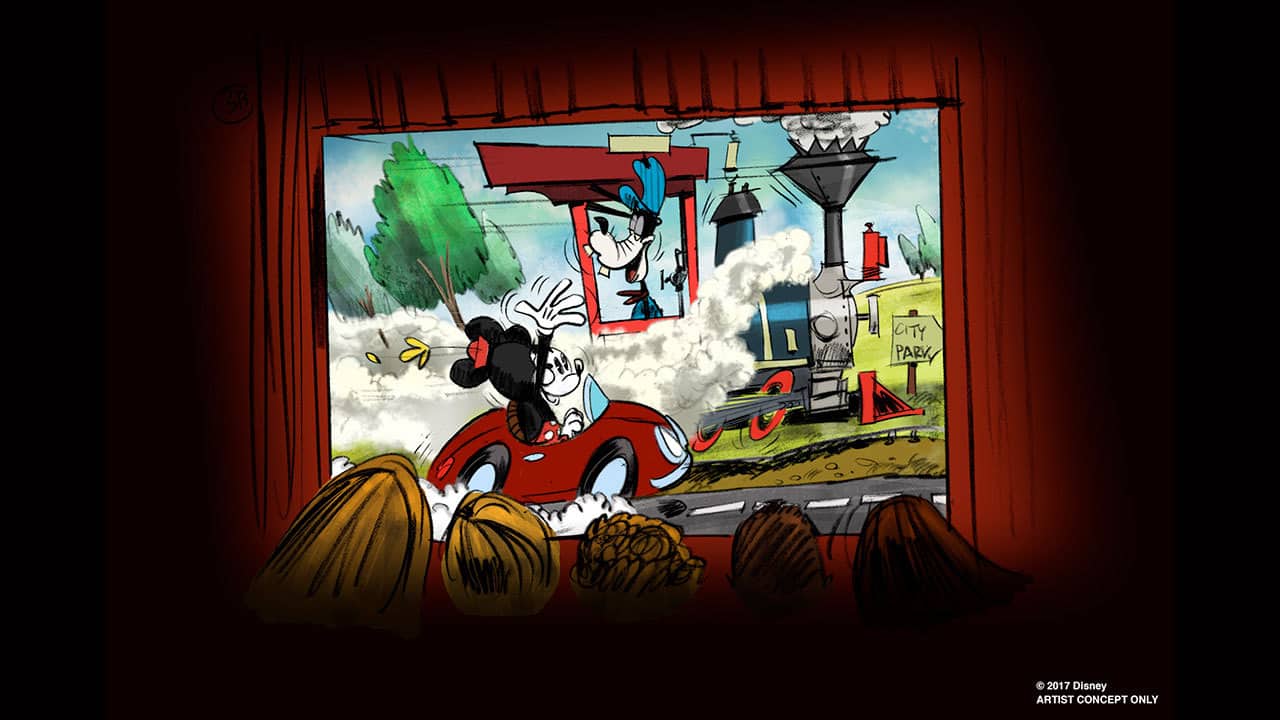 UPDATE: Details on the Ride System and Vehicles for Mickey and Minnie’s Runaway Railway at Disney’s Hollywood Studios

This morning, we told you about the projected opening date for Mickey and Minnie’s Runaway Railway at Disney’s Hollywood Studios. Now, we have some details to share on the ride system and the vehicles in which guests will be traveling when this attraction debuts in the Spring of 2019.

As stated at the D23 Expo 2017, guests will literally step through the movie screen and into a Mickey Mouse cartoon. As the concept art below shows, Goofy is the conductor on a wacky train, and it is that wacky train that guests will be boarding. With guests aboard Goofy’s train, only danger can be expected, and that’s why Mickey and Minnie Mouse will be following along in their car on your journey – in an effort to save you from Goofy’s clumsiness.

The ride system will indeed be a trackless one, much like Pooh’s Hunny Hunt at Tokyo Disneyland and Mystic Manor at Hong Kong Disneyland. Trackless ride technology is becoming more prevalent at the U.S. Disney Parks now, with the opening of Luigi’s Rollickin’ Roadsters in Cars Land, as well as the upcoming “Battle Escape” attraction for Star Wars: Galaxy’s Edge. Although The Great Movie Ride was indeed a trackless ride system, Runaway Railway’s vehicles will not be anything recycled from The Great Movie Ride. In fact, the track layout and placement of rooms in the building won’t even be nearly the same beyond the load area.

Guests will board the 16-passenger train, which consists of four separate cars that hold four guests each (two rows of two), before it departs the train barn at the beginning of the attraction. The part we are unsure of is whether the engine with Goofy at the helm will actually travel with guests through the entire ride. This would be very possible, despite the fact that the four car train can separate at any time, offering a unique ride path for every car. This being a cartoon and all, it wouldn’t be too strange for the train cars to separate and come back together at various points in the ride.

We still have one more post on Mickey and Minnie’s Runaway Railway to share with you today, Mickey’s 89th birthday, so stay “tooned”!

Next
VIDEO: Jack-Jack Shows Off His New Powers In This Teaser Trailer For “Incredibles 2”; Official Poster