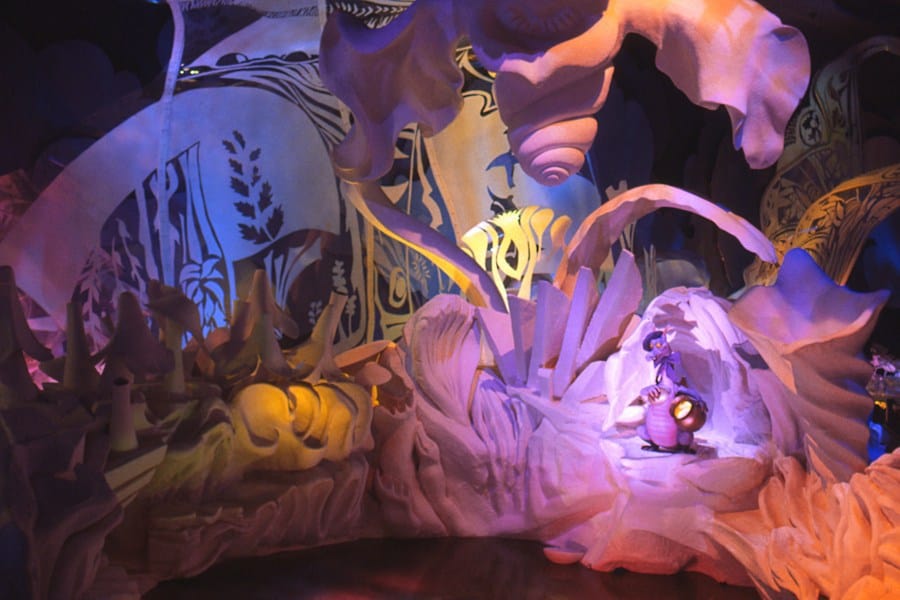 Today marks the 35th anniversary of the original Journey Into Imagination attraction at Epcot, which opened on March 5th, 1983. The attraction was so complicated that it was delayed 5 months from opening with the rest of the park in October of 1982, but when it did open, it was an immediate hit with guests and a much needed diversion for those with children in a park that lacked Disney characters at the time. Journey Into Imagination produced two incredible characters that would move a lot of merchandise in the park’s early days, something Disney really couldn’t do until they infused Mickey and the gang in rainbow space suits into the park’s items years later. Dreamfinder and Figment were an integral part of EPCOT Center until their attraction was closed in October of 1998 when corporate sponsor Kodak decided it was time to remove the aging attraction rather than update it.

The following attraction, Journey Into Your Imagination, opened in October 1999 during what would likely be considered the low point in the history of Walt Disney Imagineering and the Disney Parks. This period would bring other notorious attractions and additions such as Rocket Rods, Superstar Limo, Disney’s California Adventure, and Walt Disney Studios Paris, just to name a few of the duds (some of which are finally being addressed now, all these years later). Needless to say, it was hard to find a guest who enjoyed the cheap-looking, mostly uninspired Journey Into Your Imagination, and guest relations at Walt Disney World was bombarded with complaints from guests of how bad the ride was and how they missed Figment and Dreamfinder dearly. The complaints were so numerous that the ride was closed less than 2 years later in the Fall of 2001 and Imagineers tasked with fixing the ride on an extraordinarily limited budget. In fact, the budget was too small to complete the new ride, so money was siphoned off of the upcoming Mission:SPACE attraction without the knowledge of management. Then Disney CEO Micheal Eisner reportedly hated the Figment character, so he was unwilling to let the company spend much on such a project.

In June 2002, Journey into Imagination with Figment opened to guests. Having attended this grand opening, I was very happy to see Figment return home and to hear the classic “One Little Spark” theme reinstated. However, as nice of a gesture as it was, this always felt like a temporary fix until something better could be drawn-up. Once the novelty of our purple dragon friend’s return wore off, the sheen of this polished turd was gone and the internet went back to rumors of a new Imagination pavilion. That was the mid-2000’s, it is now 2018. This ride is still open. In fact, it has just become the longest running attraction to ever occupy the space, outliving the original attraction by a few weeks now.

With the original ride being many a fan’s favorite attraction of all-time and Figment seemingly more relevant than ever thanks to the nostalgia of others in my age range and our willingness to buy anything with him on it, It would be an understatement to say that the time has come for something new. How this attraction has lived in this state for almost 16 years is beyond me, sadly probably a product of the booming merchandise sales of Figment items. Why would you fix something if it’s making money? Well, if you don’t understand that Figment’s merchandise sales are in spite of the horrendous attraction that stands there today, this line of thinking makes some sense.

Even though the finish line is seemingly in sight with the upcoming overhaul of Epcot, rumored plans for new attractions in this space have gone silent. Internal rumblings suggest that management changes on the Epcot overhaul project may have killed the proposed Inside Out ride for the Imagination Pavilion, but something is still likely slated for the next phase of the park’s revitalization. Let’s just hope it won’t be much longer.

Regardless of what has followed, I am happy to celebrate Figment and Dreamfinder’s birthday today and mark the anniversary of a ride that was such a big part of my fascination with Disney Parks and my love of Epcot, and I’m sure many of you feel the same.

If you would like to take an in-depth, multi-hour trip through the history of Journey Into Imagination at Epcot, please check out our Back to the Future segment: