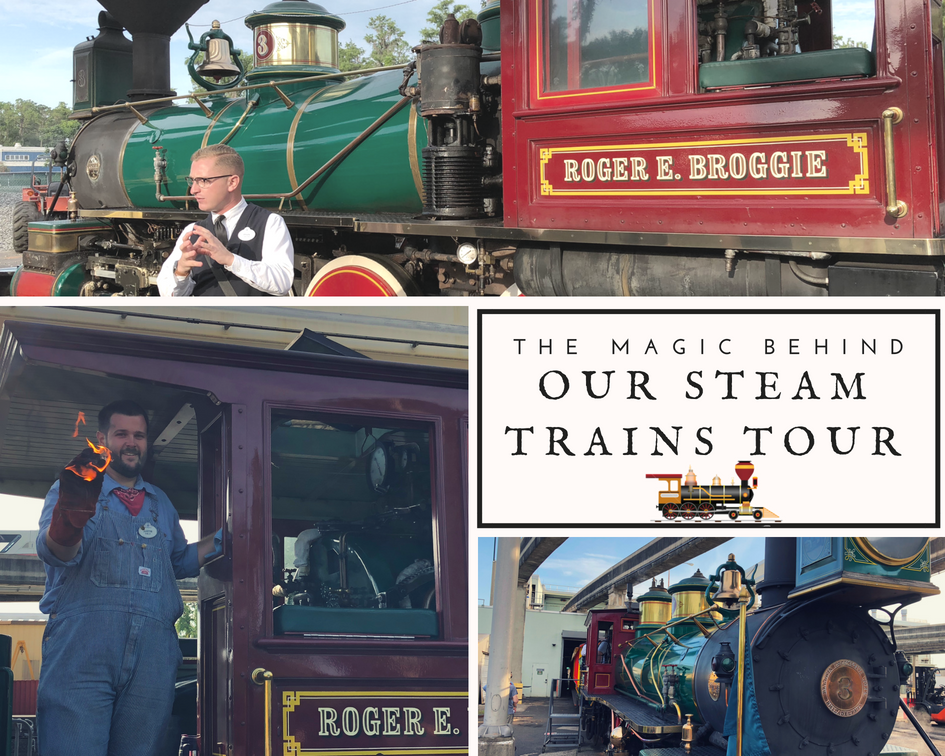 The Magic Behind Our Steam Trains Tour

All aboard! We’re about to take a grand circle tour of the “Magic Behind Our Steam Trains Tour” at Disney World’s Magic Kingdom park. Just sit tight and keep your hands, arms, feet, and legs well inside the train. For one of Disney World’s less known tours,  this train adventure sure does steam up a surprising amount of fun!

Before the tour begins, guests are asked to meet outside the main entrance to Magic Kingdom at 7:15 am.  You’ll be introduced to your guide and be given a brief orientation.  On non-event days, Magic Kingdom opens to the general public at 9:00 am, so the tour begins well before other guests are allowed into the park. This is so you can have an exclusive behind-the-scenes look at how the four Magic Kingdom trains are tested and prepped each morning before running the track around the park with guests.

Once you’ve been oriented, your tour guide will take you up to the Main Street Station where you’re given special access to one of the Magic Kingdom steam trains.  While waiting for the all clear to depart the Main Street Station, your guide and a conductor will give you a history of the trains at Disney World and will also let you in on tidbits such as how the drivers and conductors communicate on the same and on separate trains.  You’ll also learn how the trains received their names and how Disney came to acquire the antique steam models in the first place.

After leaving the Main Street Station, you ride the train around to the back side of the park, not quite to the Fantasyland Station.  Along the way, you’ll learn about some additional backstage tricks and details related to not only the steam trains but the stations and other nearby attractions as well.  Just be careful not to blink because you’ll miss some details you likely wouldn’t otherwise notice on your own!

So far everything has been fun and interesting, but now you’re in for the truly unique experience you hoped to have!  Before pulling into the Fantasyland Station, your steam engine will stop just around the north bend of the track.  The track is then switched and you move back in reverse to make your way to the train roundhouse were the engines and monorails are housed when not in use.

Though not given access to actually enter the roundhouse, you’ll spend plenty of time just outside the building in this behind-the-scenes area.  While you’re here, you’ll be further educated on how the trains are maintained and cared for.

As you spend some time outside the roundhouse, you’ll also be given access to the pilot car (driver’s area).  Locomotive enthusiasts in particular will really love getting an up-close-and-personal look at all the gears and controls, learning exactly how the trains work.  Unlike most other attractions and rides at the Disney parks, driving the steam trains involves a lot more than just moving forward and stopping.  The trains are authentic steam engines that require specially trained drivers.

Before heading back to the Fantasyland and Main Street Stations, you’ll be given a couple more demonstrations of how these classic locomotives work.  One such demonstration was being able to see how the engines are ignited by fire in order to create the steam needed to run.  You’ll also experience what it means to “pop off” while you’re away from the big crowds.

By this point in the 3 hour tour, Magic Kingdom has been opened to regular park-goers and the trains are needed for transporting guests around.  You therefore quickly chug along back to the Main Street station before being given a short break in/near the Town Square Theater.

After your break and complimentary drink, your guide will gather the group back together for some final interesting facts and stories about the history of the Disney World steam engines.  Train buff or not, any Disney enthusiast will appreciate this segment of the tour as it is dedicated almost entirely to Walt Disney and his love for locomotives.  You’ll be shown around the area underneath the Main Street Station before then making your way back up inside the building lobby where you’ll receive an exclusive tour souvenir and bring the tour to the “end of the track”.

Know Before You Go

Is the “Magic Behind Our Steam Trains Tour” worth the $55 ticket price?  You bet your darn tootin’!  Although the tour doesn’t put you right in the middle of the action as some of the other tours do, don’t underestimate how much fun you’ll have!  You get VIP access to areas of Magic Kingdom that you otherwise would likely never see and it’s especially neat to connect to Walt Disney through his love of these steam engines.  One great perk of doing the train tour is that you’re given access to Magic Kingdom long before other guests, giving you a glimpse of the park in ways you don’t notice when the masses are around.  Also, because the 3 hour tour starts so early, you still have plenty of time to enjoy the park after the tour concludes.

The only aspect of the “Magic Behind Our Steam Trains Tour” that might derail you a bit is getting to Magic Kingdom so early in the morning.  Because the parks don’t open until 9:00 (or 8:00 if there’s an Extra Magic Hours event), Disney buses are not running at 7:00 am to get you to the park by 7:15.  You will instead need to make arrangements to get to the park via a Minnie Van, taxi, Uber, or Lyft.  I was able to find a private taxi from our hotel for $10 through a group on social media.  Any non-Disney transportation must drop passengers off at the Contemporary resort before you must then take the five minute walk over to Magic Kingdom.

9 Best Things to Do in Disneyland with Preschoolers

6 thoughts on “BEYOND THE RIDES: The Magic Behind Our Steam Trains Tour”