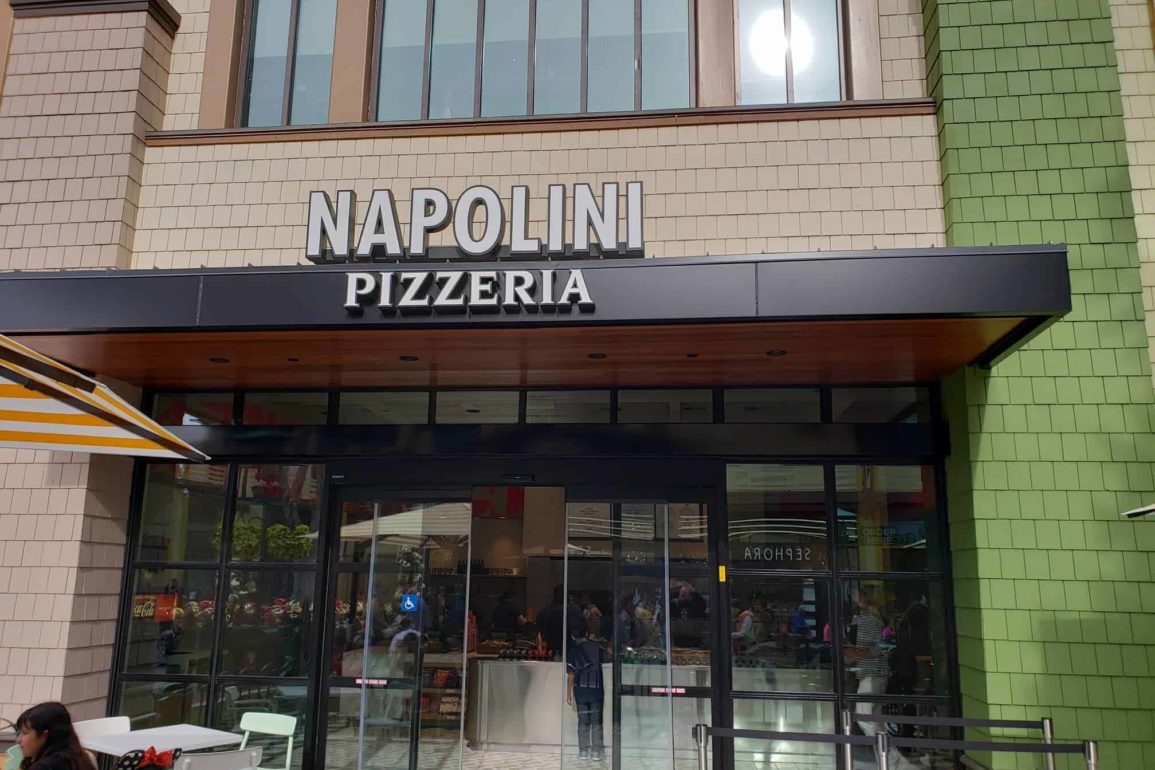 As we reported earlier this month, the newly renovated Napolini has reopened. Yesterday I had the opportunity to try several of their food items and get a general idea of how the quick service eatery feels in its new condition. Immediately when walking into Napolini you can see that they have completely redesigned the interior and made it feel very upscale for a quick service restaurant. Marble counter tops and sleek arrangements of their drink and side food options give it an inviting feel. Napolini has changed their style to be similar to other quick service pizza places such as Blaze or Pieology, though their decor is more upscale than either of those places. Guests now have the opportunity in the newly renovated and reopened Napolini to create their own personal pizza or order one of the Signature Pizza options. Listed below are the Signature Pizza options:

One of my personal favorite pizza types is a barbecue chicken-styled pizza. This pizza was fantastic. You could definitely tell that the ingredients were fresh and the dough was light yet nicely crisped. The chicken was not hard and chewy, which can sometimes happen when the pizzas are prepared in this way (I know I have had that experience at both Blaze and Pieology). If you know that you enjoy barbecue chicken pizzas then you’ll most likely enjoy this one immensely.

I asked for a recommendation of which pizza would be the second pizza I tried and this is the pizza recommended to me by the manager on duty. He glowed as he described the authenticity of the pizza in comparison to the same styled pizzas he had eaten when he visited Italy. I am so glad that he gave me this recommendation. Quite simply, this pizza was delicious. The pizza comes topped with fontina, mozzarella, potato pieces, and bacon. The crowning ingredient is a single egg yolk placed delicately in the middle of the pizza. The manager recommended that I sprinkle some pepper on top of the egg when the pizza came out and it was another stellar recommendation. I would gladly eat this pizza again for breakfast, lunch, or dinner. I’m going to have a hard time picking another pizza when I return to Napolini – yes, it’s that good.

For those who love pieces the same way that Kevin McCallister loves his pizza then this is the choice for you. It was simply dough, sauce, and mozzarella cheese.

This salad is a pre-made option that you can retrieve from the refrigerated section. The romaine lettuce was crisp, the tomatoes were delicious (though there were only a few small bites of them), the dressing was solid, but the best part was the parmesan crusted cracker adorning the top of the salad. It was popping with flavor. It was also a good size portion wise.

This salad came with mixed baby greens, provolone cheese, mixed olives, cherry tomatoes, artichoke hearts, cucumbers, pickled mushrooms, piquante peppers, and a red wine vinaigrette dressing. This salad was more substantial than the Caesar salad. It seemed like every bite had a different flavor palate. My personal taste in salads is for fewer ingredients and more focus, but this wasn’t bad by any means.

These are all the food options that I tried during my visit. Full disclosure – Napolini invited my family to try these foods at no cost. That being said, in true WDWNT fashion, I have been completely honest in my descriptions. This newly renovated and reopened version of Napolini is a nice upgrade over the previous incarnation of Napolini. With personal pizzas using fresh ingredients and cooked right in front of you, it is hard to imagine choosing any pizza you might find in Disneyland or Disney California Adventure over Napolini in Downtown Disney. I heard a cashier asking people if they were Annual Passholders, which leads me to believe that they also give a discount if you are an Annual Passholder. Lastly, the prices are fantastic. What do you think? If you’ve tried Napolini since they’ve reopened do you agree or disagree with my review? Comment below.