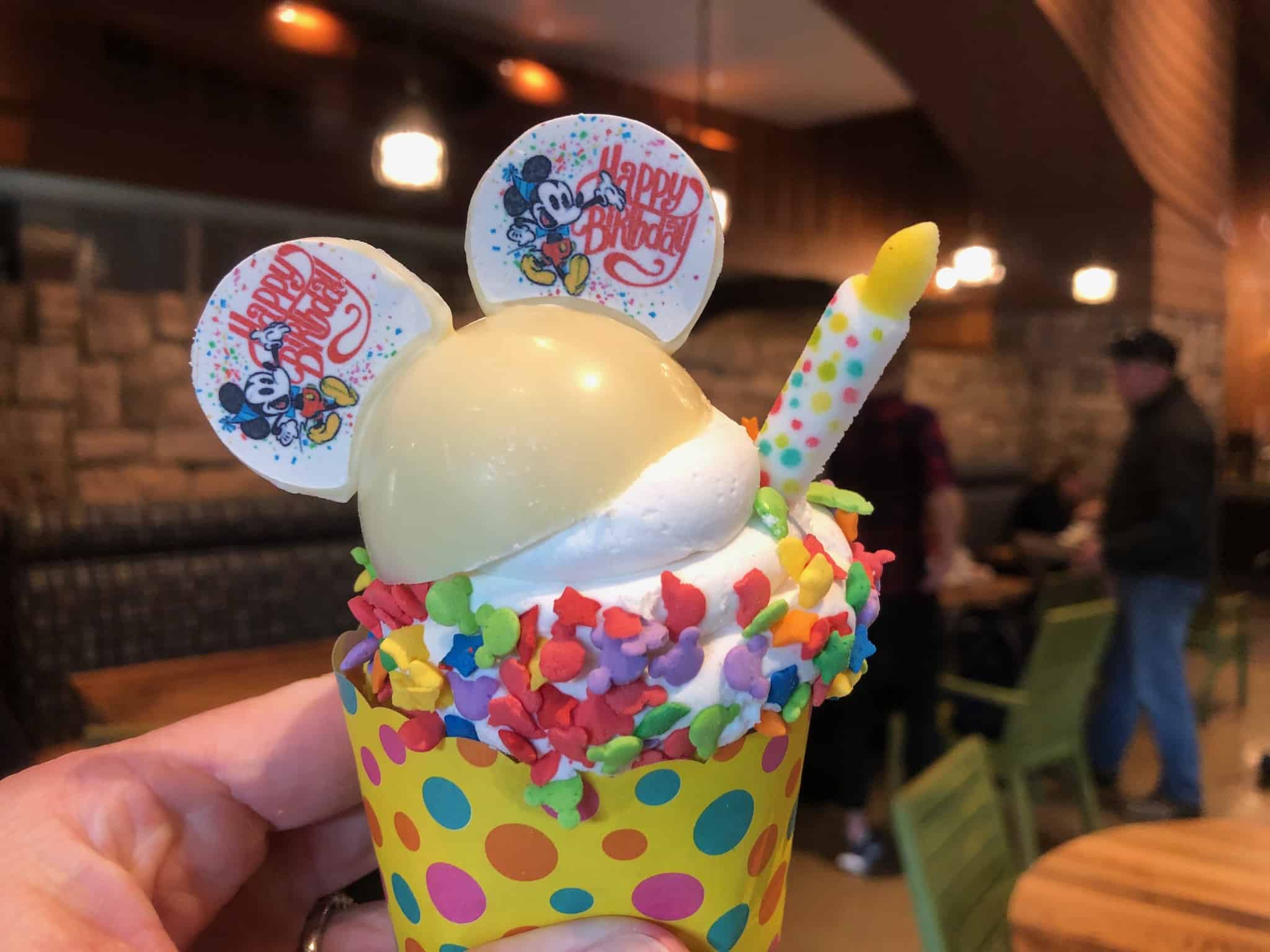 REVIEW: Mickey Themed Pizza, Cupcake and Baked Alaska – Get Your Ears On Celebration at the Grand Californian Hotel

The Get Your Ears On Celebration is in full swing throughout Disneyland Resort. The Grand Californian Hotel and Spa has three Mickey Ear inspired treats to offer between the Hearthstone Lounge and White Water Snacks. Guests don’t need a park ticket to try these offerings. 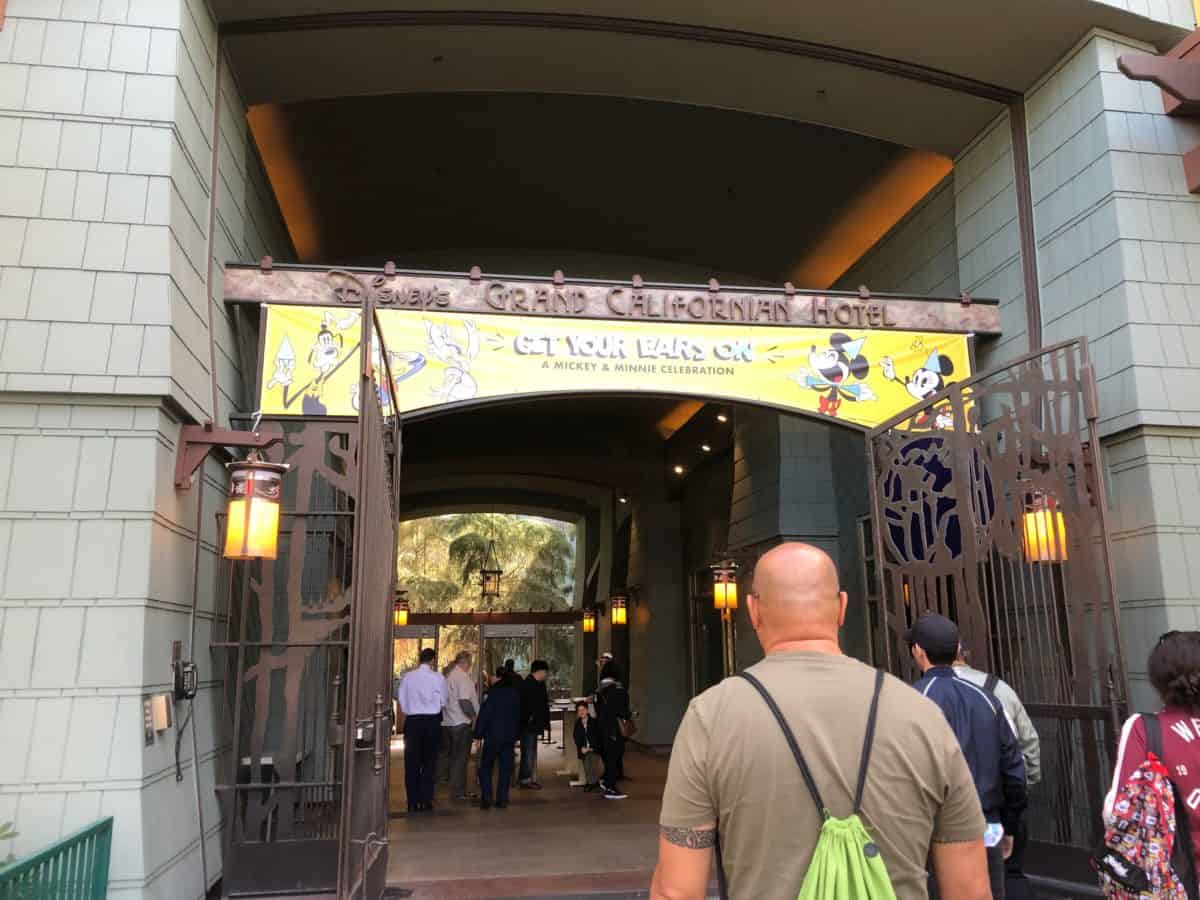 It should be noted that the official food guide handed out in the parks says that White Water Snacks will offer the pizza (which they have) and a Mickey crispy rice treat. White Water Snacks did not have the rice treat, nor did the cast member seem to think they were getting it. They did, however, have a special birthday cupcake. 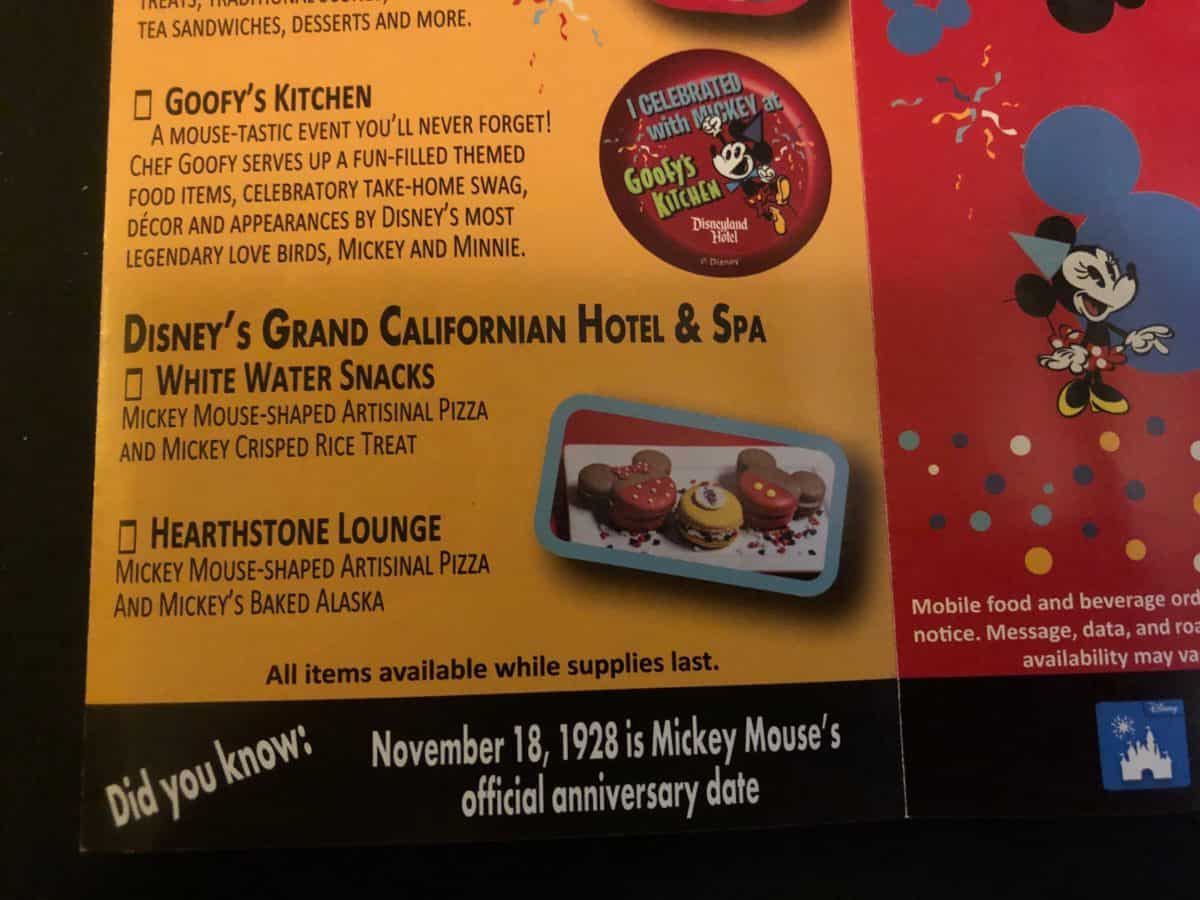 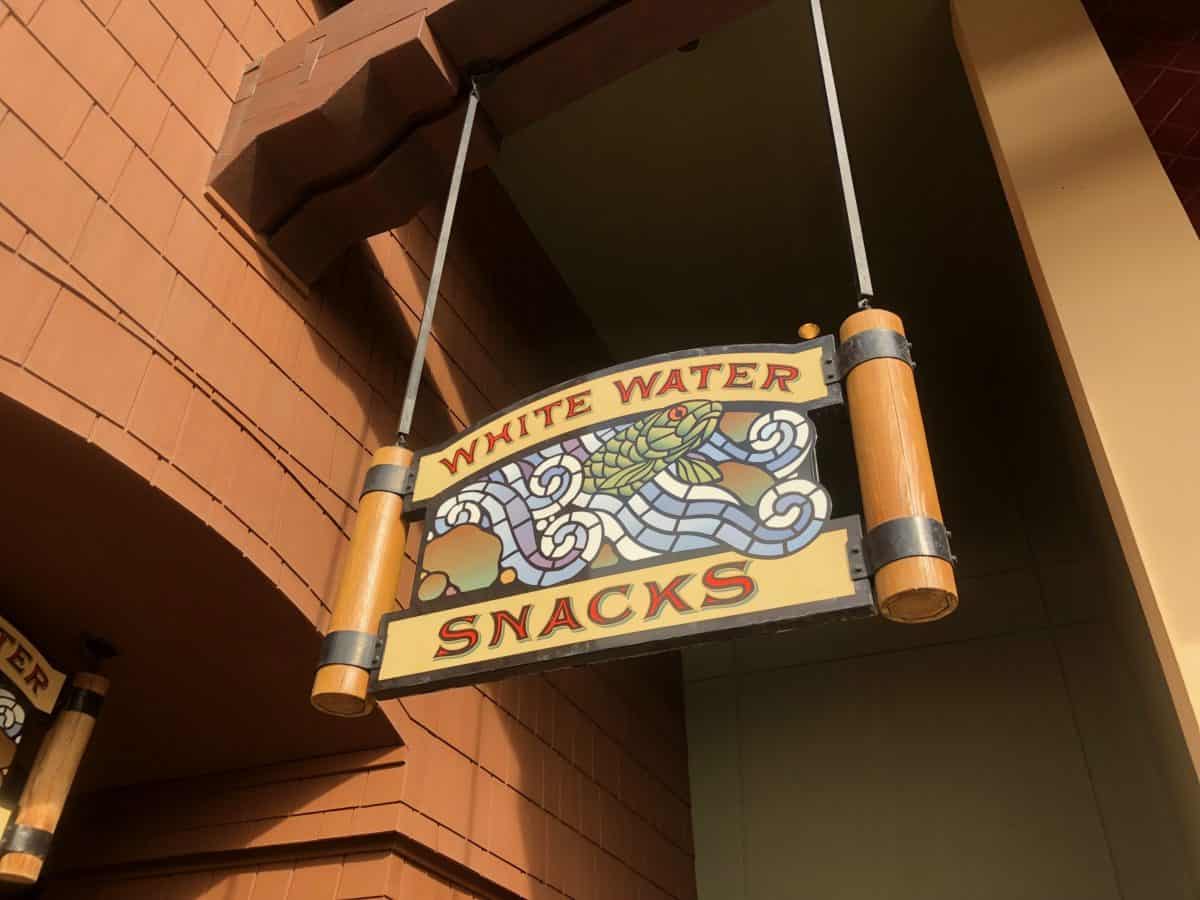 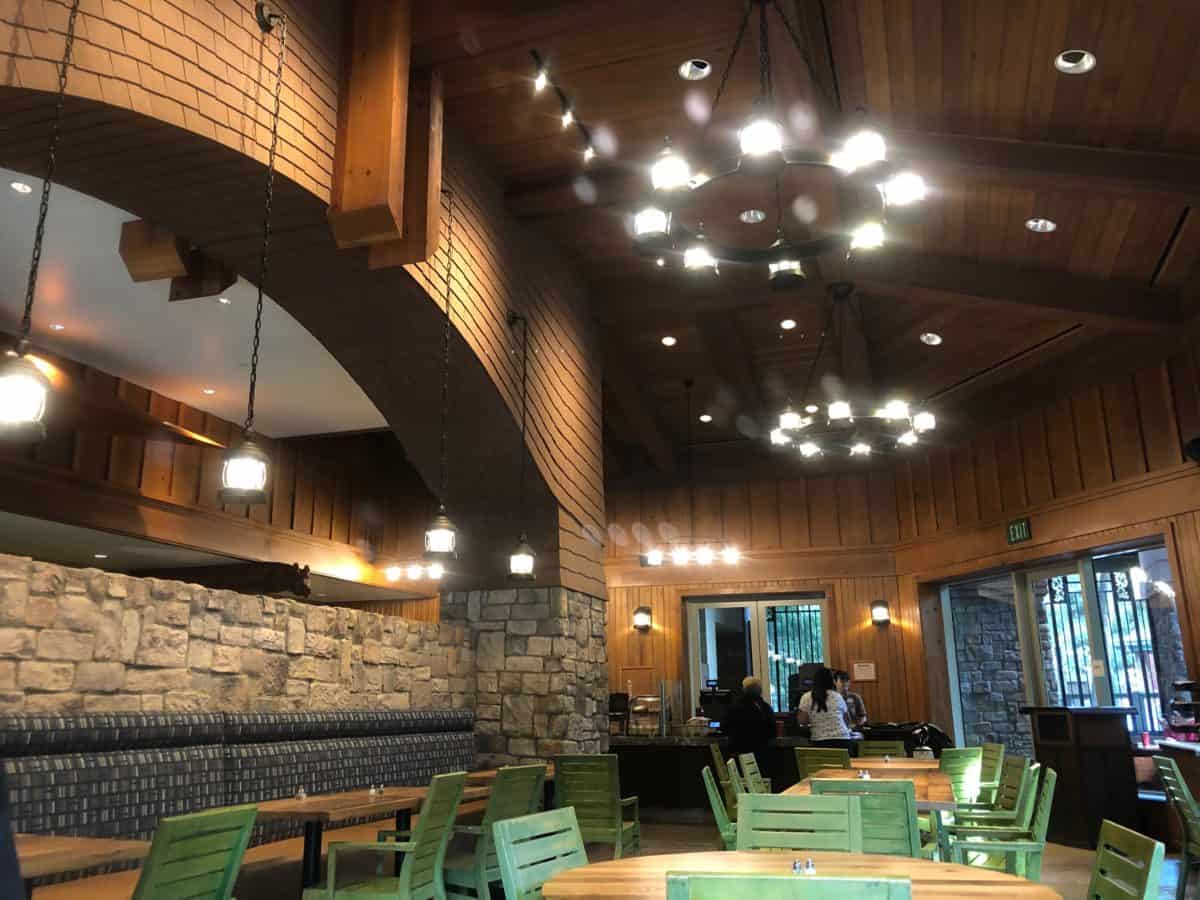 They do have the Mickey Mouse-shaped Artisanal Pizza, which we sampled at Hearthstone Lounge, but this looks to be the exact same pizza. 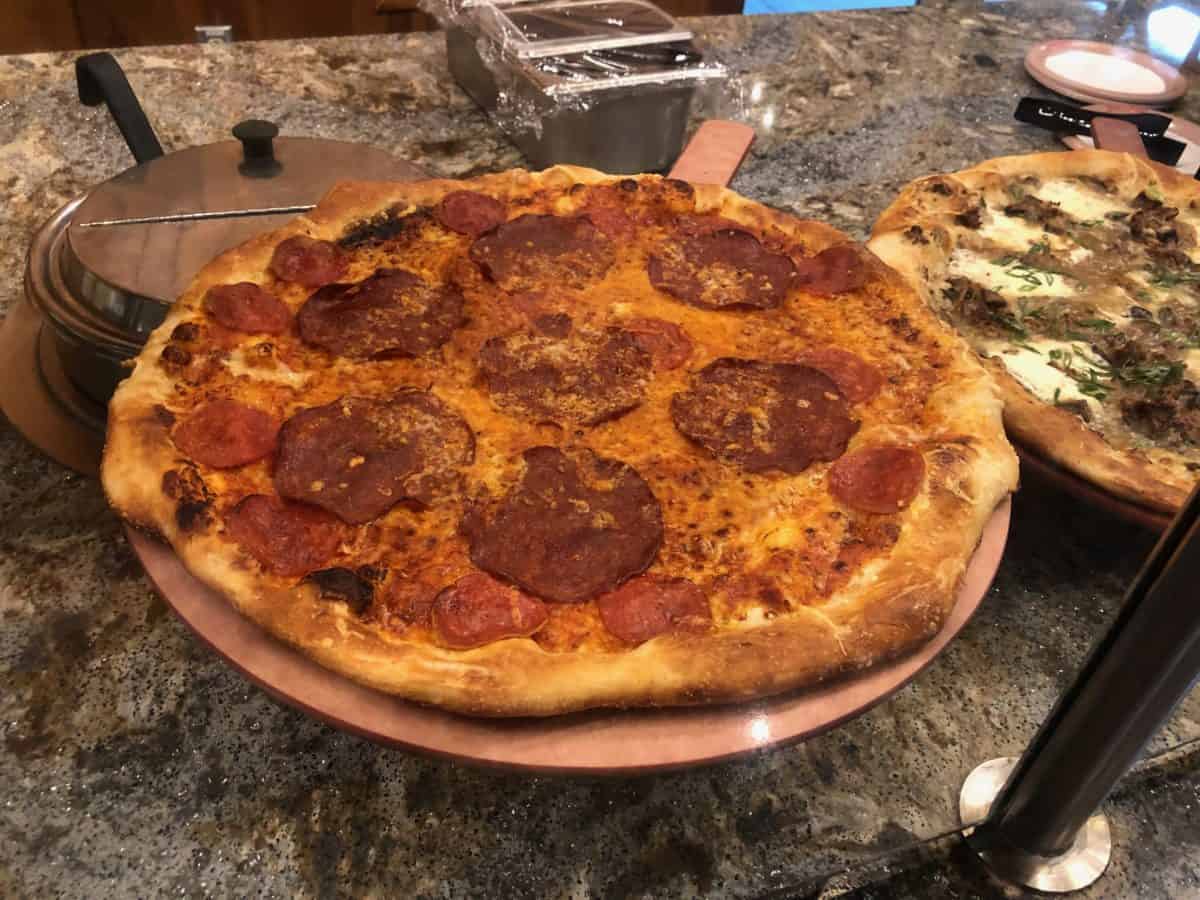 We spent a few minutes looking for the Mickey-shaped rice treat before finally asking. Then we discovered these beauties in the glass case.

I’m not sure what the official name of this is as it isn’t listed anywhere. The receipt says Easter Cupcake, so who knows? But regardless, this was a delicious cupcake. 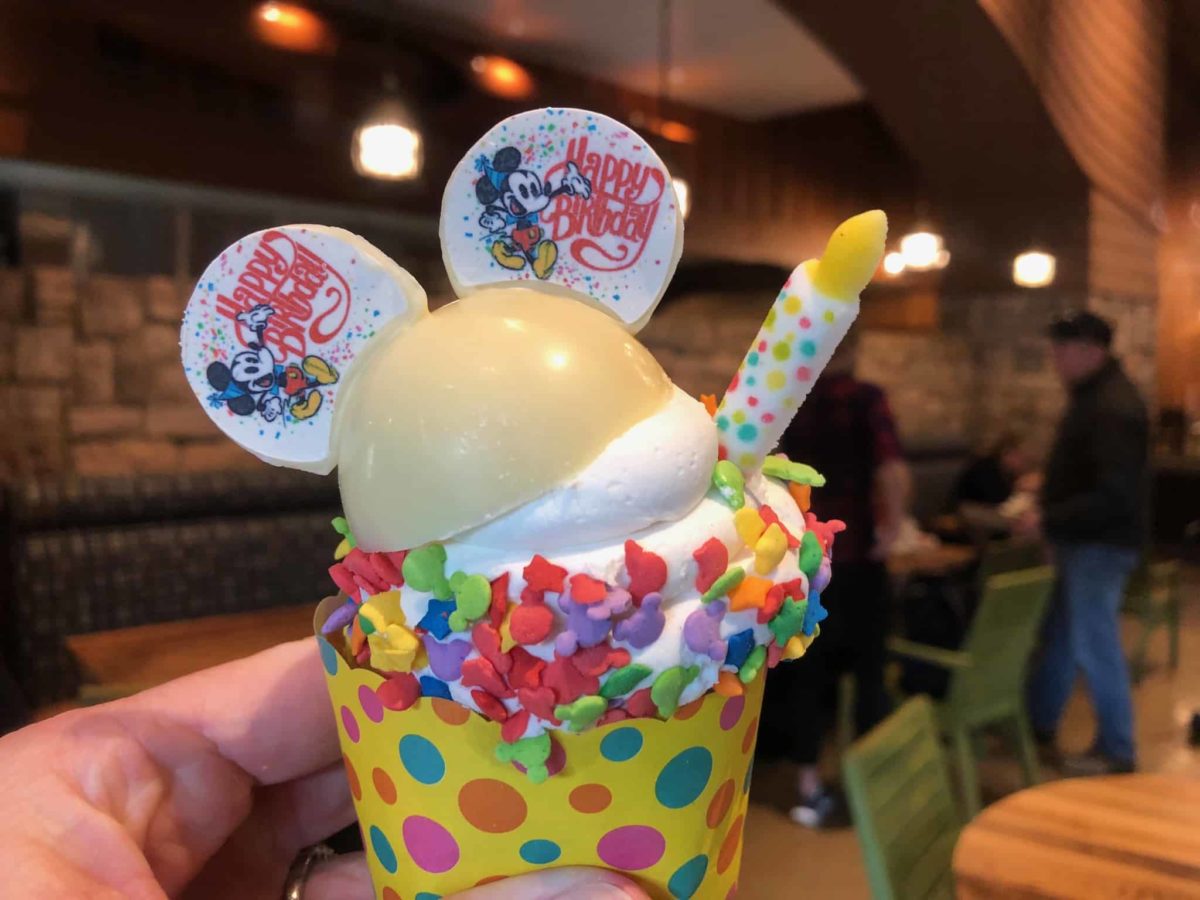 This was fun and festive. The white chocolate ears are adorable, as was the candle and Mickey-shaped sprinkles. Souvenir Mickey sipper was beyond excited for his cupcake. 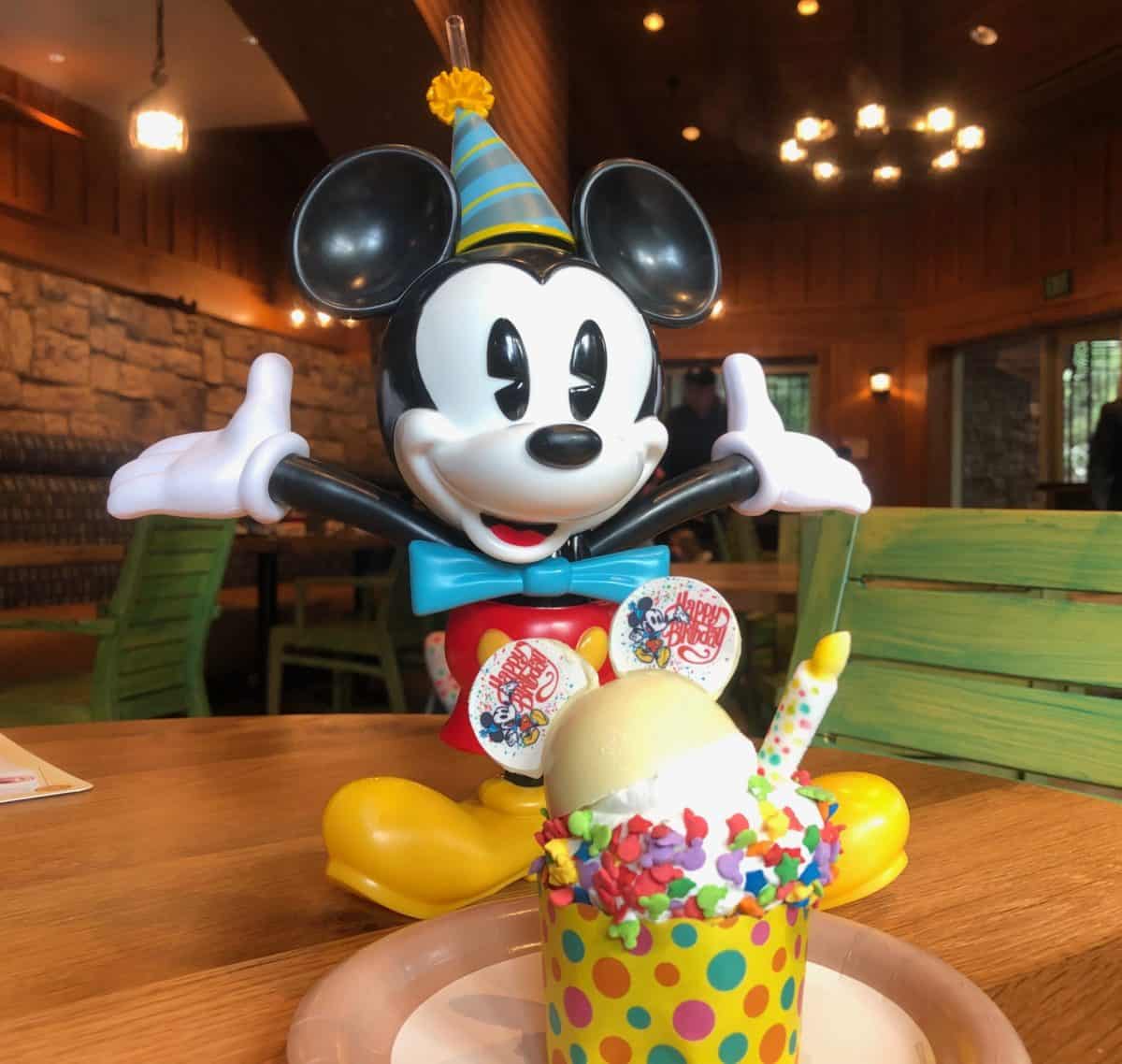 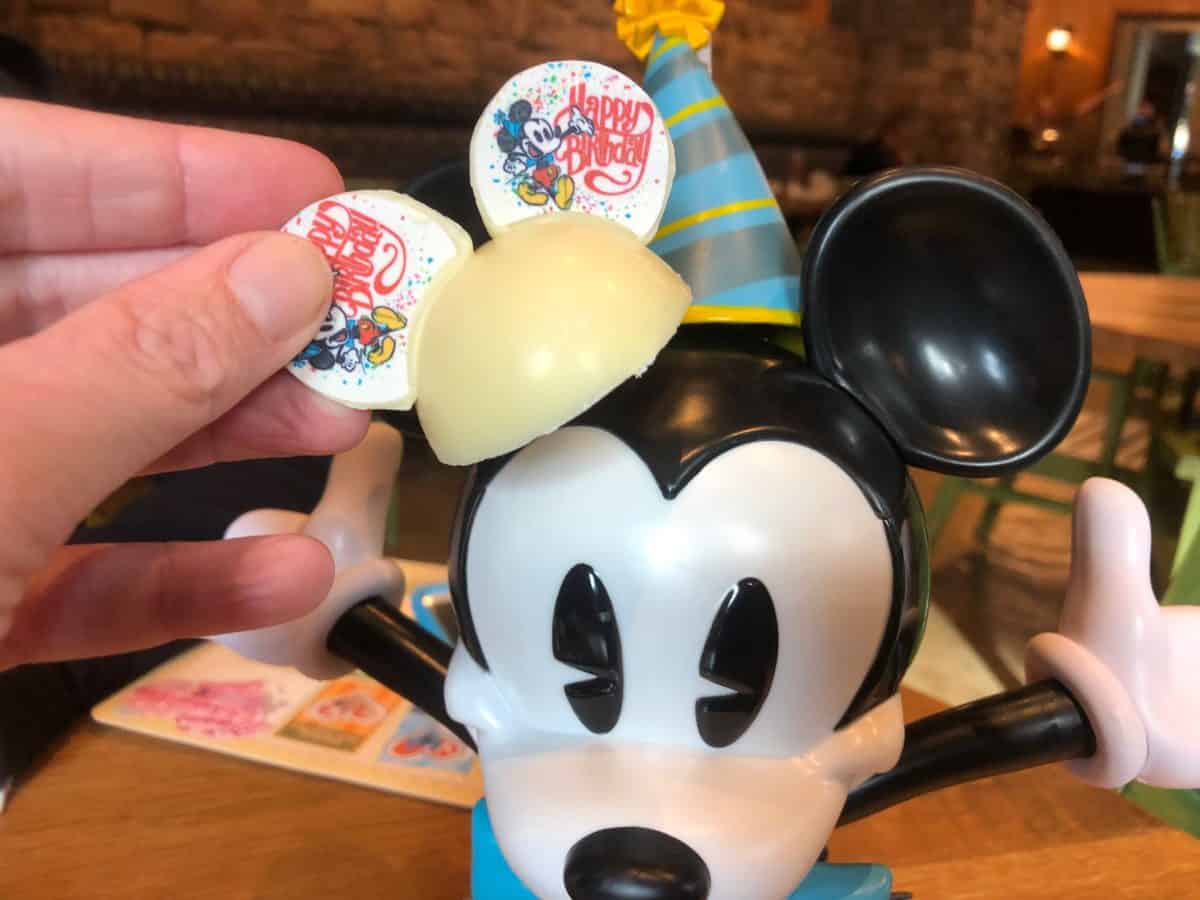 Sadly, the interior of the ears was hollow. 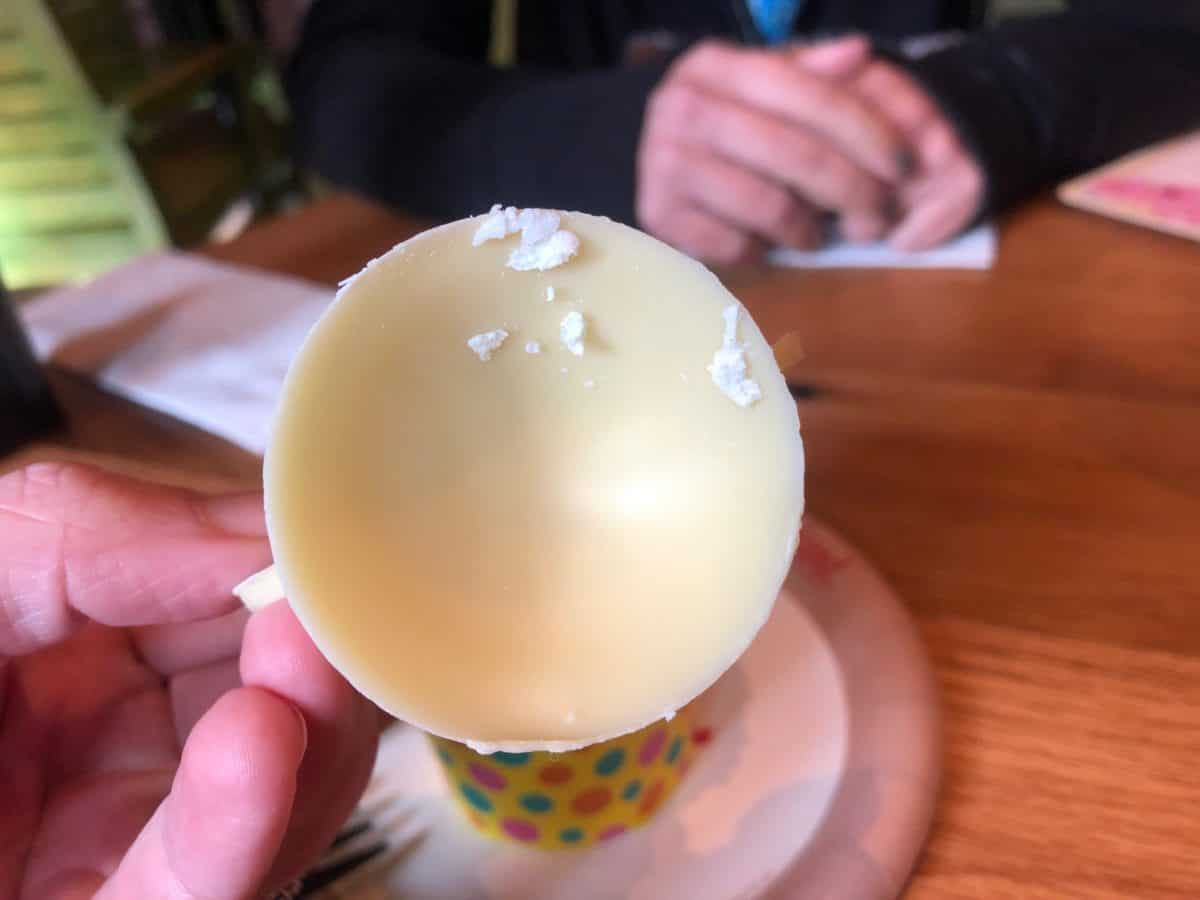 Be warned on this sugar candle: It is hard packed granulated sugar. So unless you want a solid hit of sugar, just skip it. 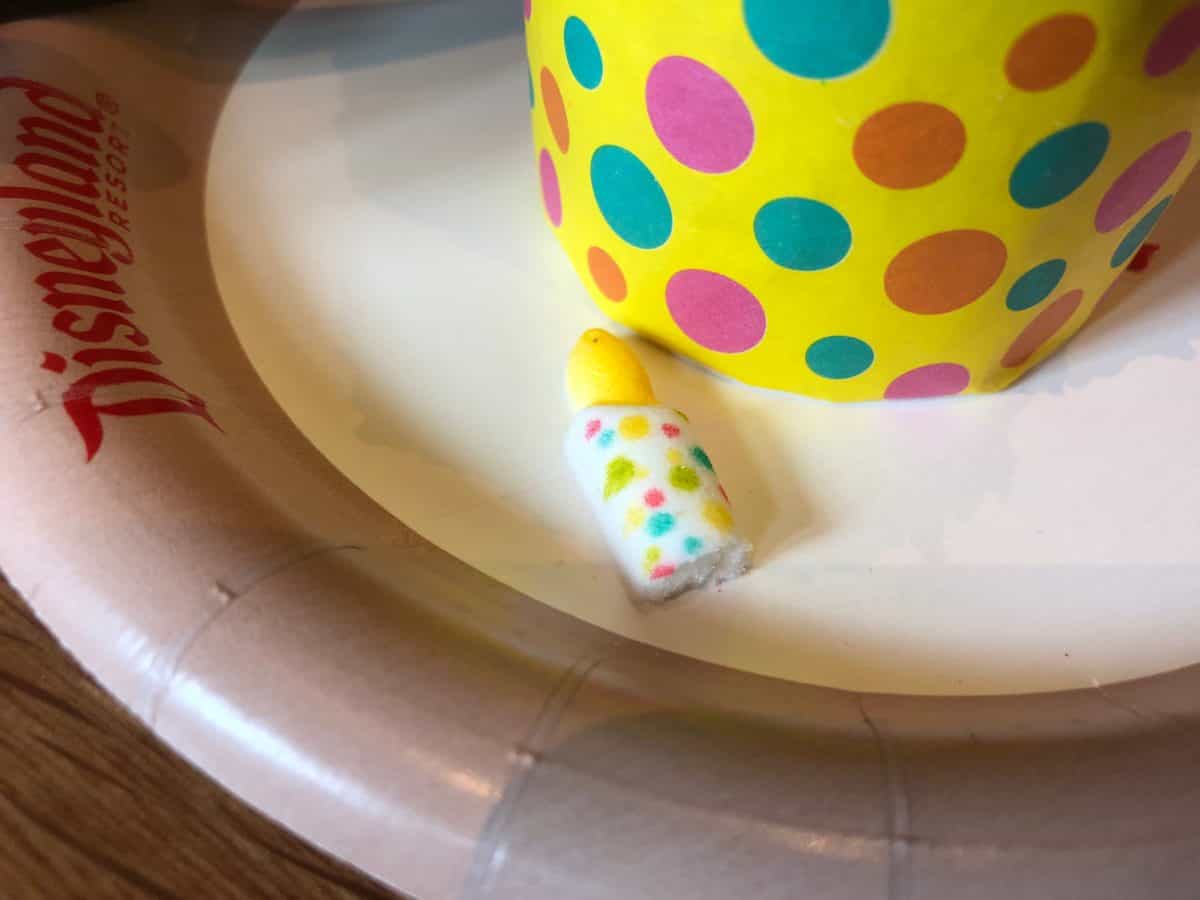 The frosting was light and delicious. A simple vanilla buttercream was perfect to accompany the rich, moist birthday cake flavored interior. 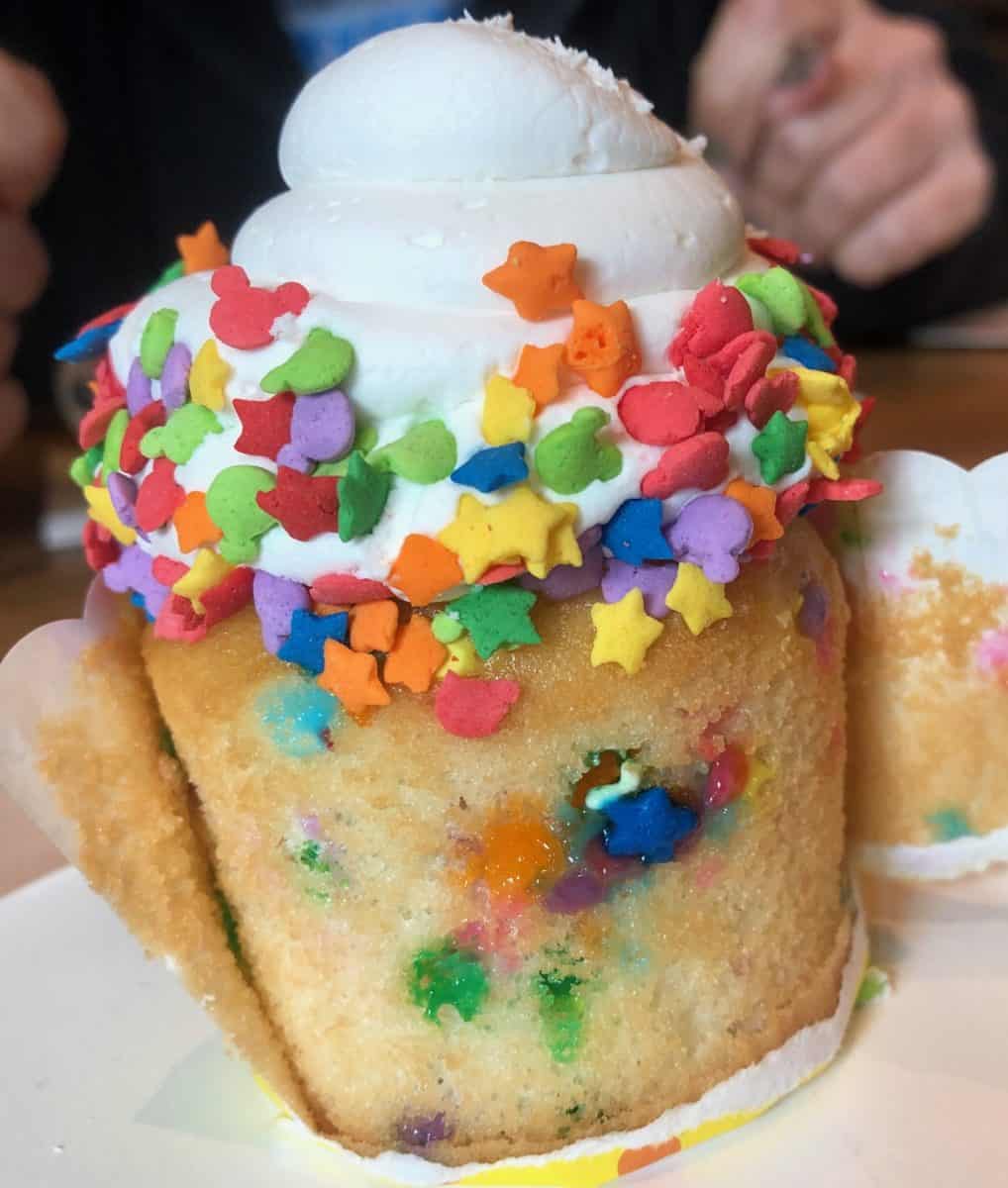 We all liked this cupcake a lot. Seven dollars is a bit steep for a cupcake, but it was good and very photogenic.

Across the way, you’ll find the Hearthstone Lounge which also has the pizza along with a Mickey-themed baked Alaska. 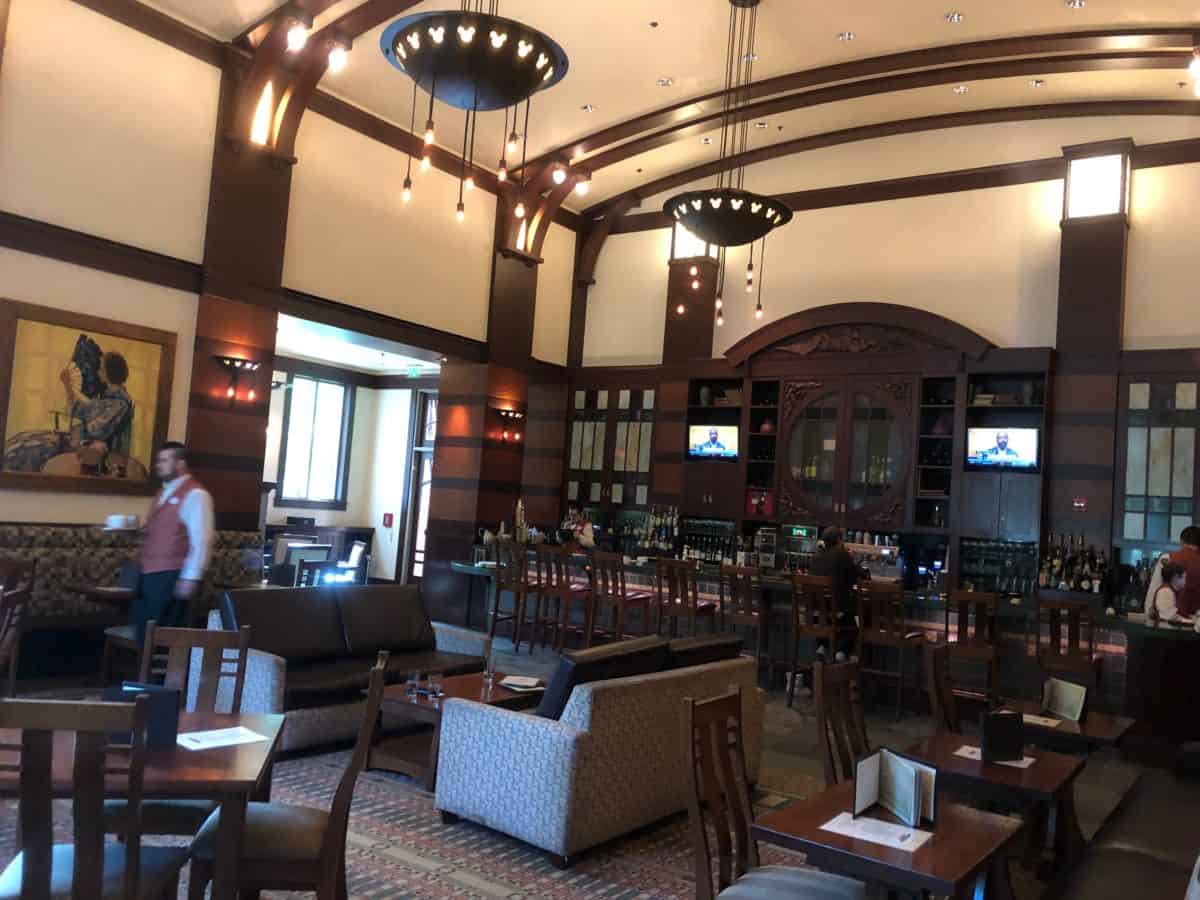 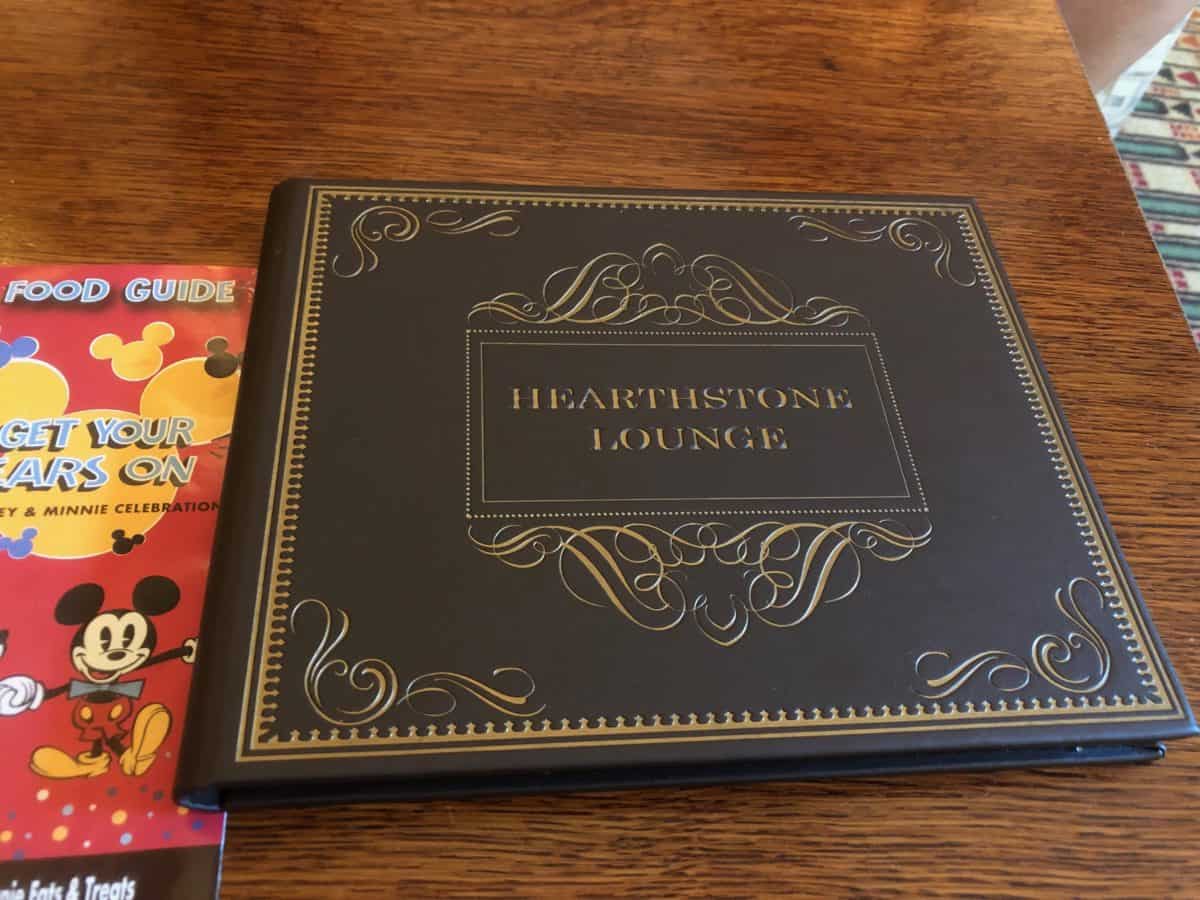 There was no signage advertising the special treats. After flipping though the entire menu, we spotted the dessert on the last page. We asked our server about the pizza and he immediately knew what we wanted, but we found it odd there was no mention anywhere. 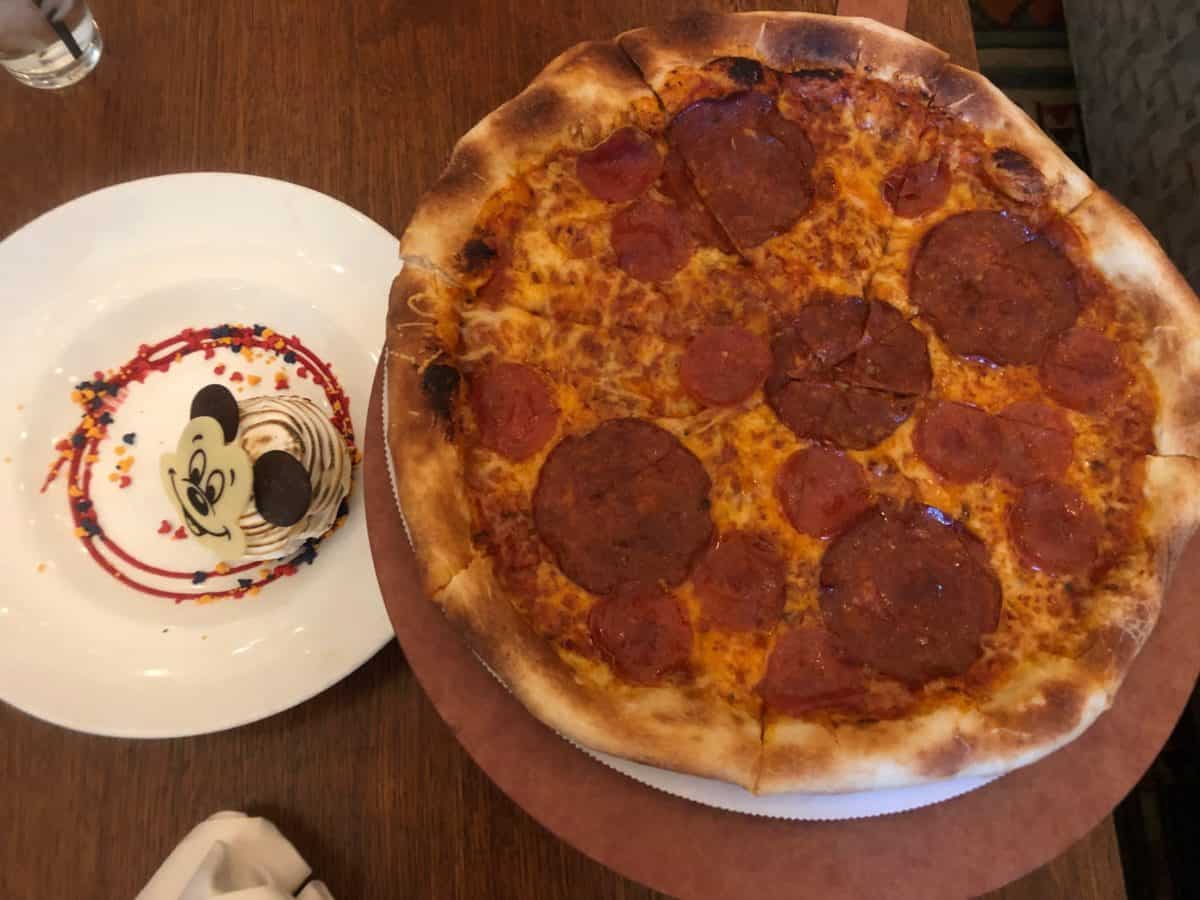 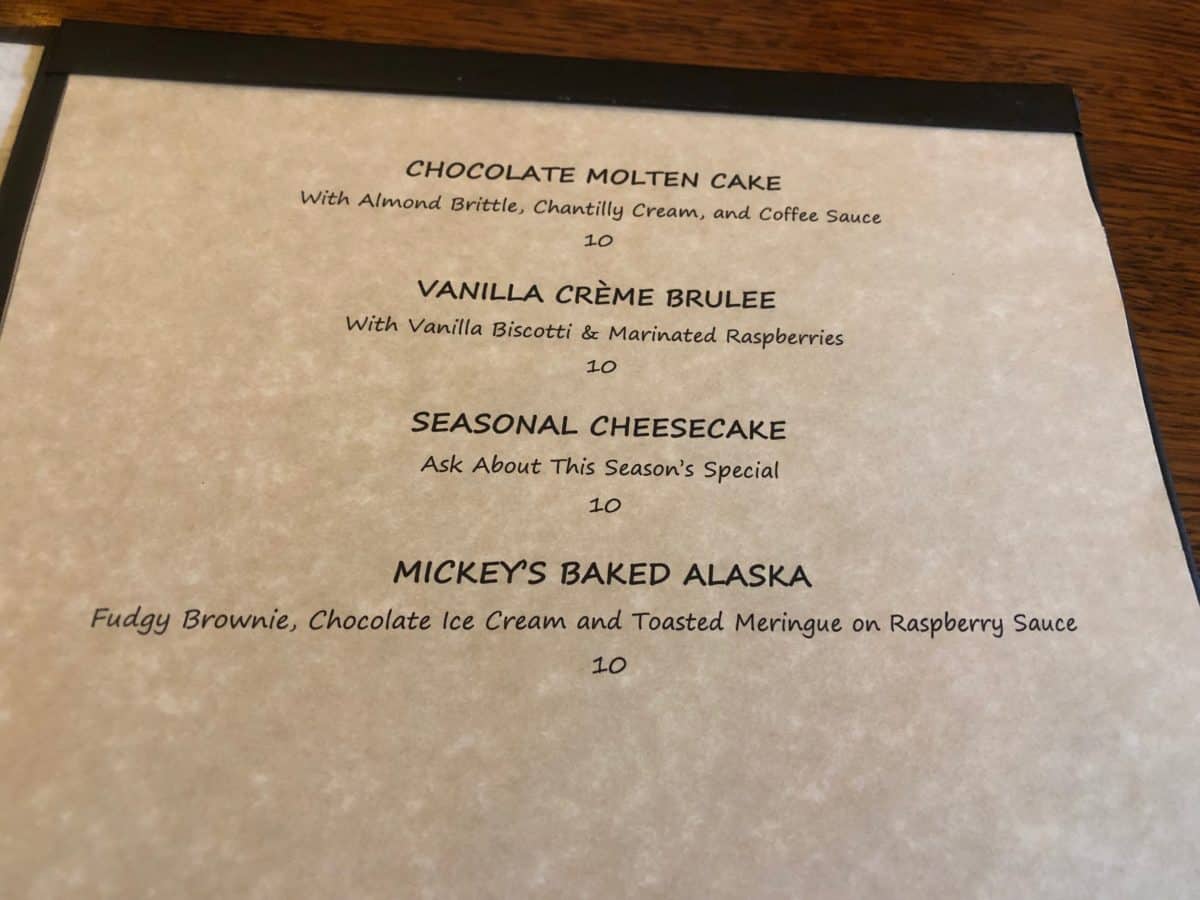 This dessert was amazing. We all loved it. Even at $10, I would get this again. 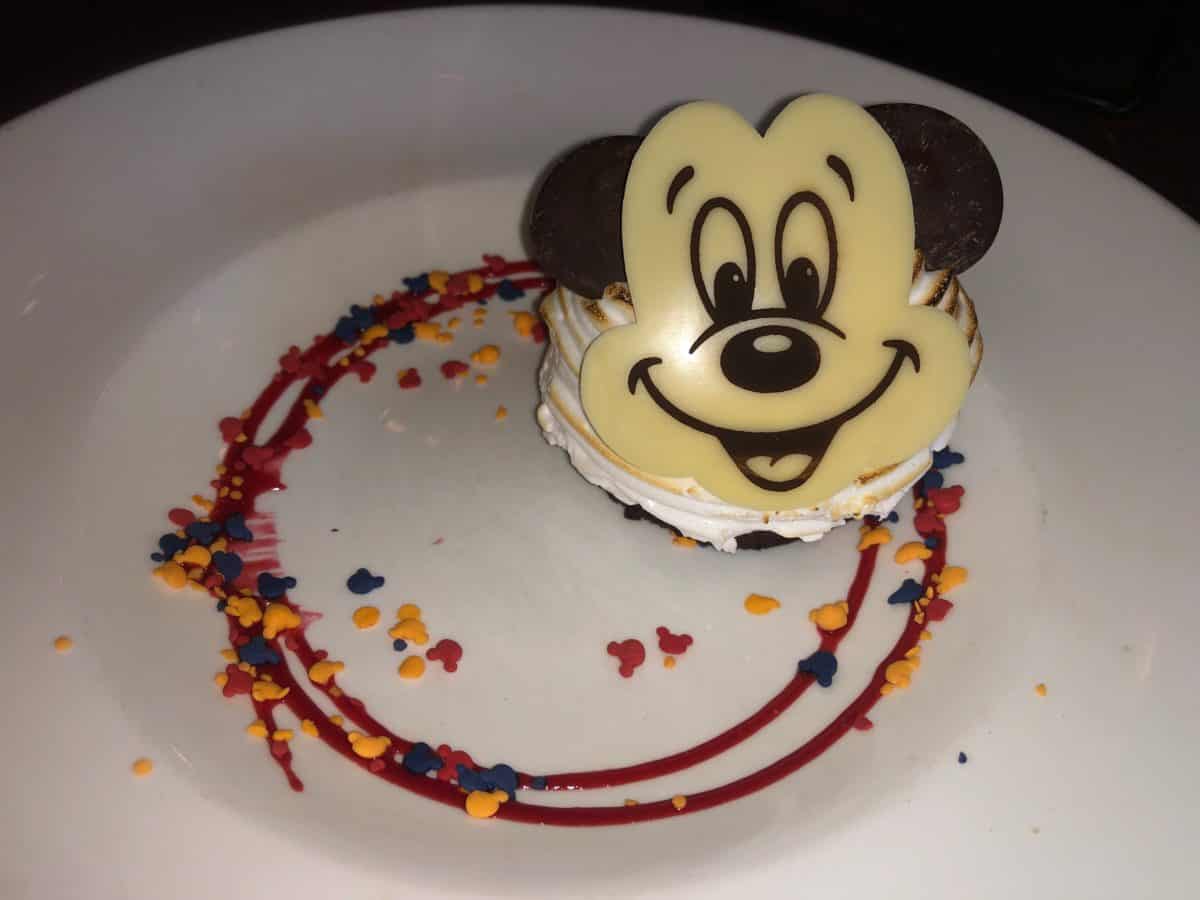 Mickey’s ears are a bit small. He looks more like a dog than a mouse, but it was cute nonetheless. The ears are basic milk chocolate chips, but they were good. Mickey’s face was made of white chocolate. 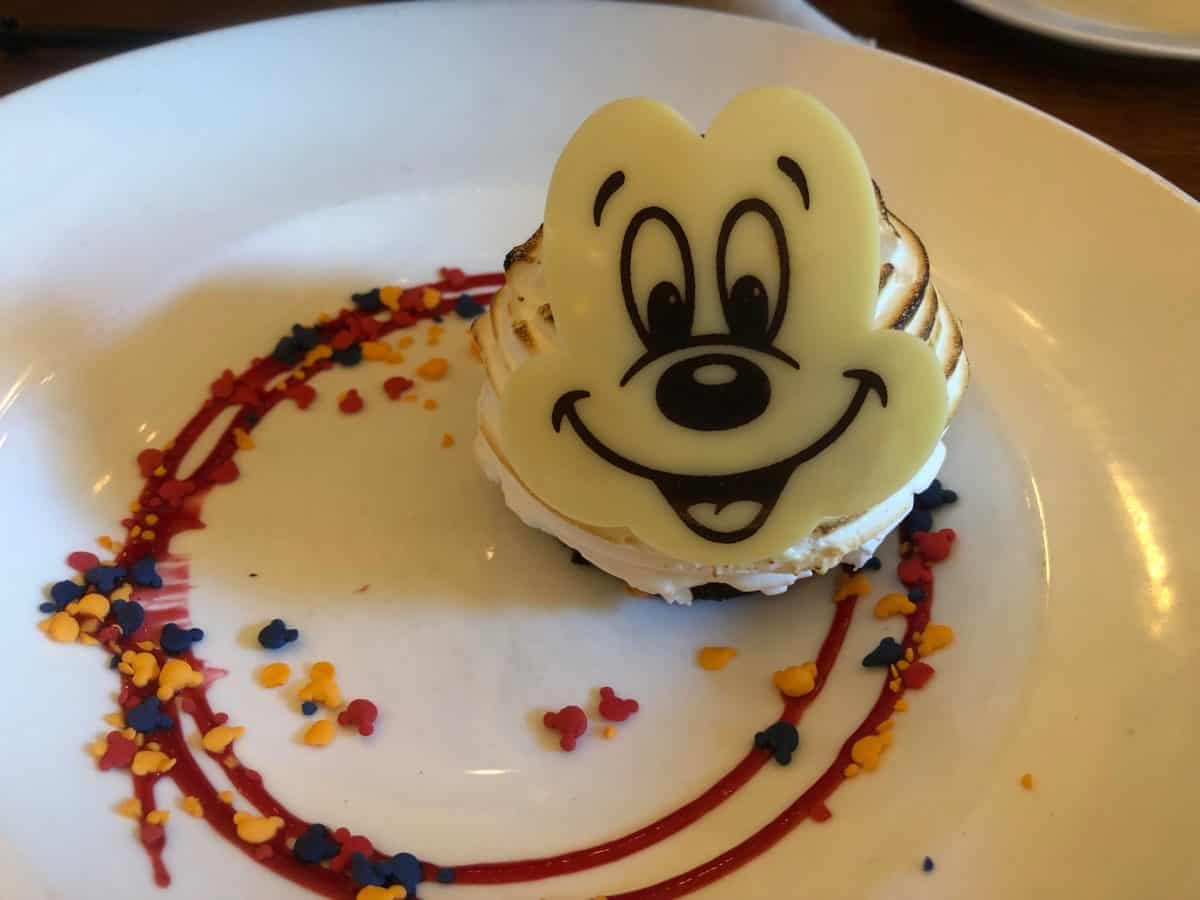 The meringue was well-toasted, but still light and fluffy. The ice cream was still cold and very rich and chocolatey. The sprinkles gave it some texture and the frosting drizzled on the plate added some color. 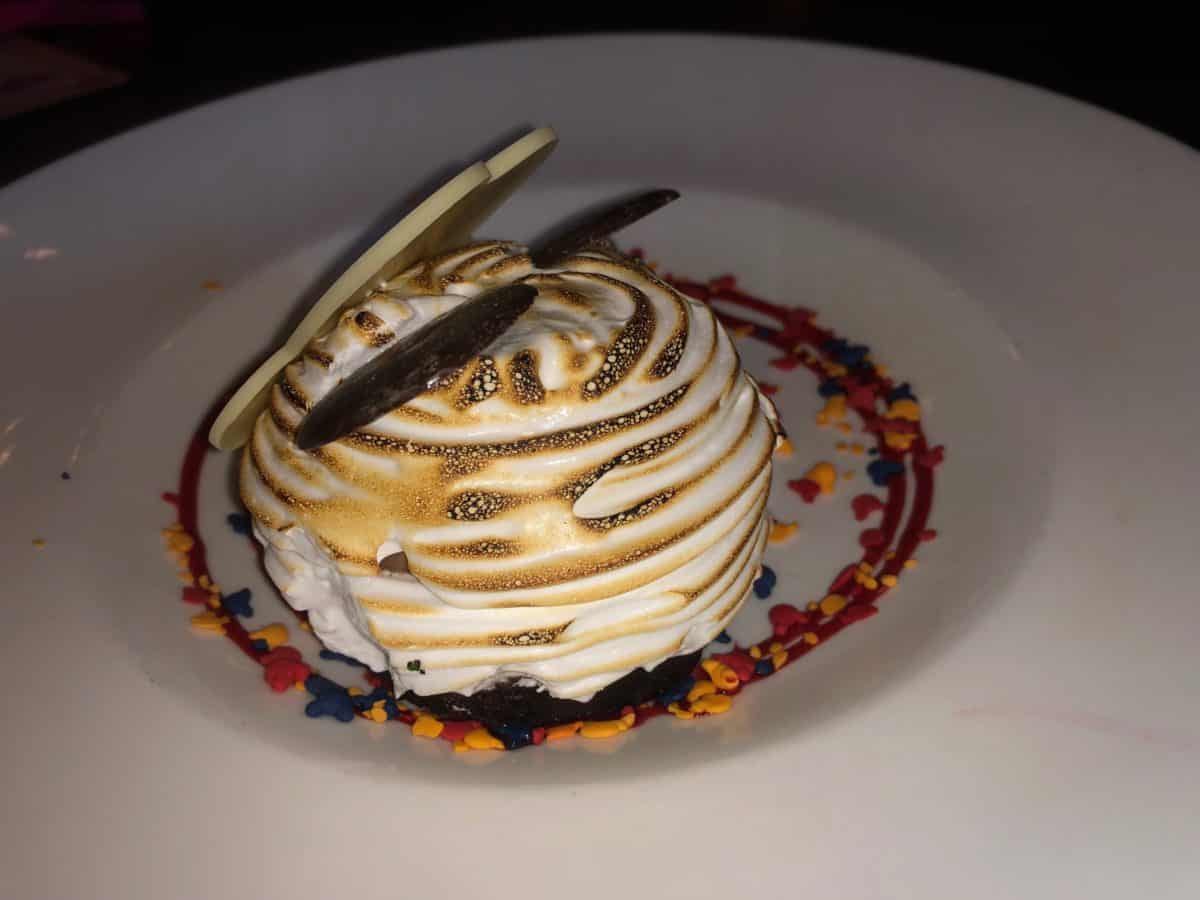 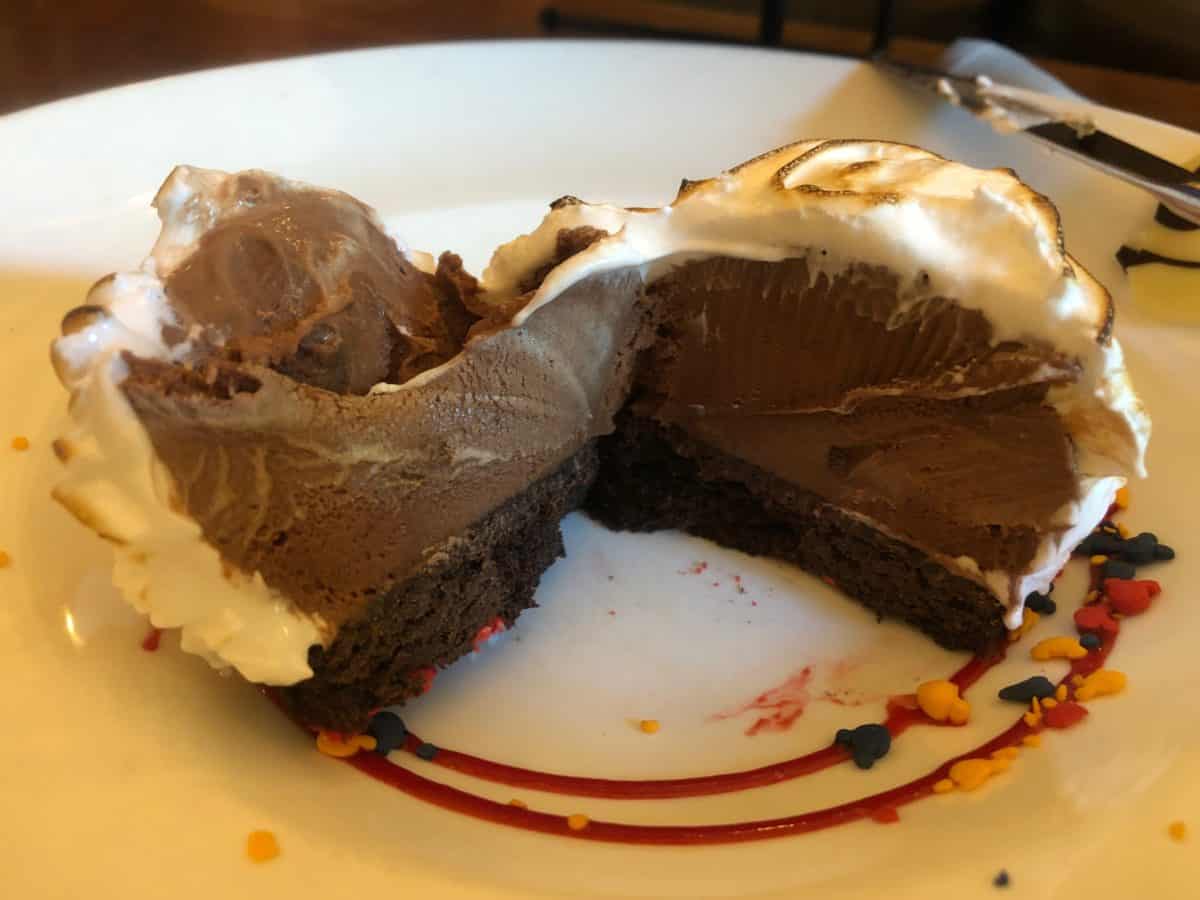 Our only complaint would be the brownie which was good, but not outstanding. This dessert easily could have been a sugar bomb, but it wasn’t. It was well-balanced and fun to eat. Do yourself a favor and head over to the Grand Californian and try this. 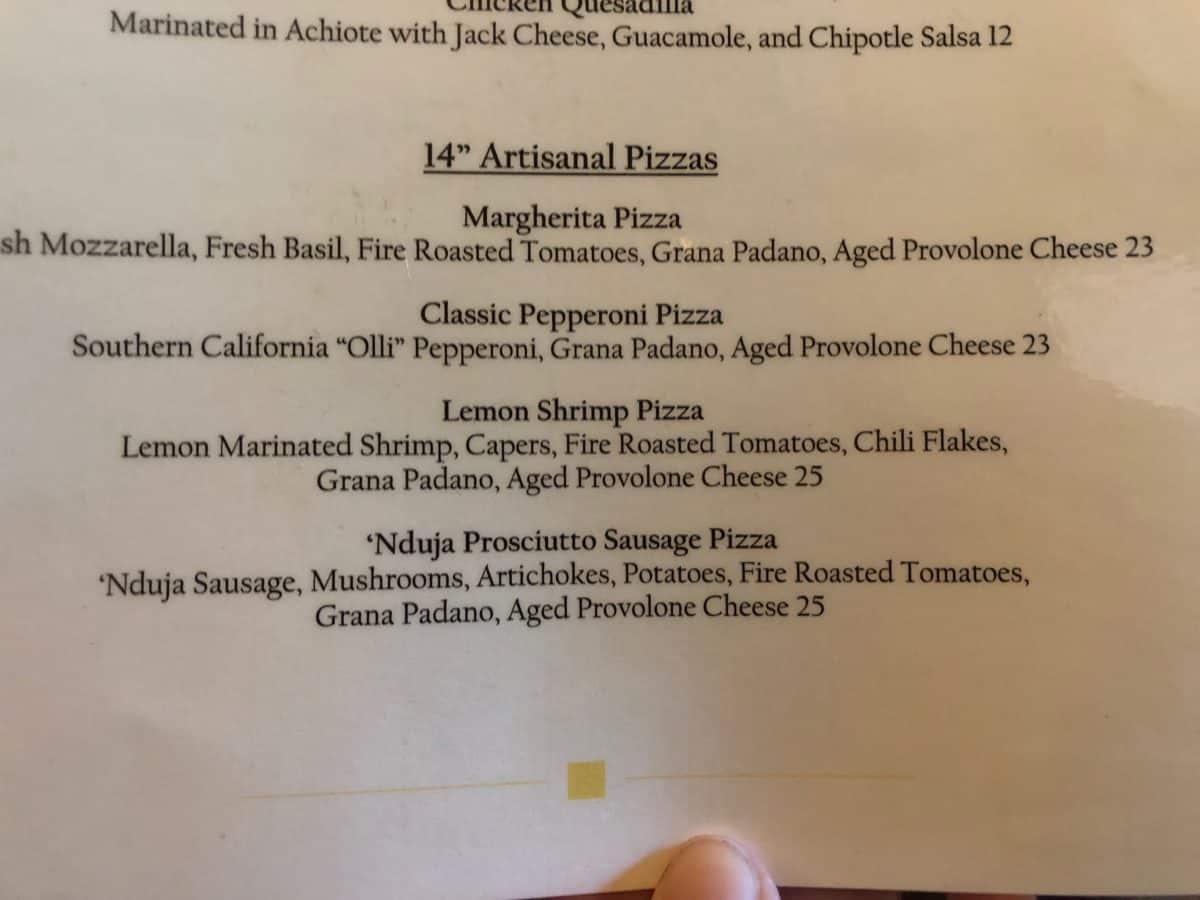 This official Mickey Mouse-shaped Artisanal Pizza is not on the menu, but there is a pepperoni pizza for $23. If you want your pepperoni arranged like Mickey ears, then you apparently pay an additional $2. But since you’re already at Disneyland Resort, shouldn’t this be Mickey-shaped by default? Just a thought. 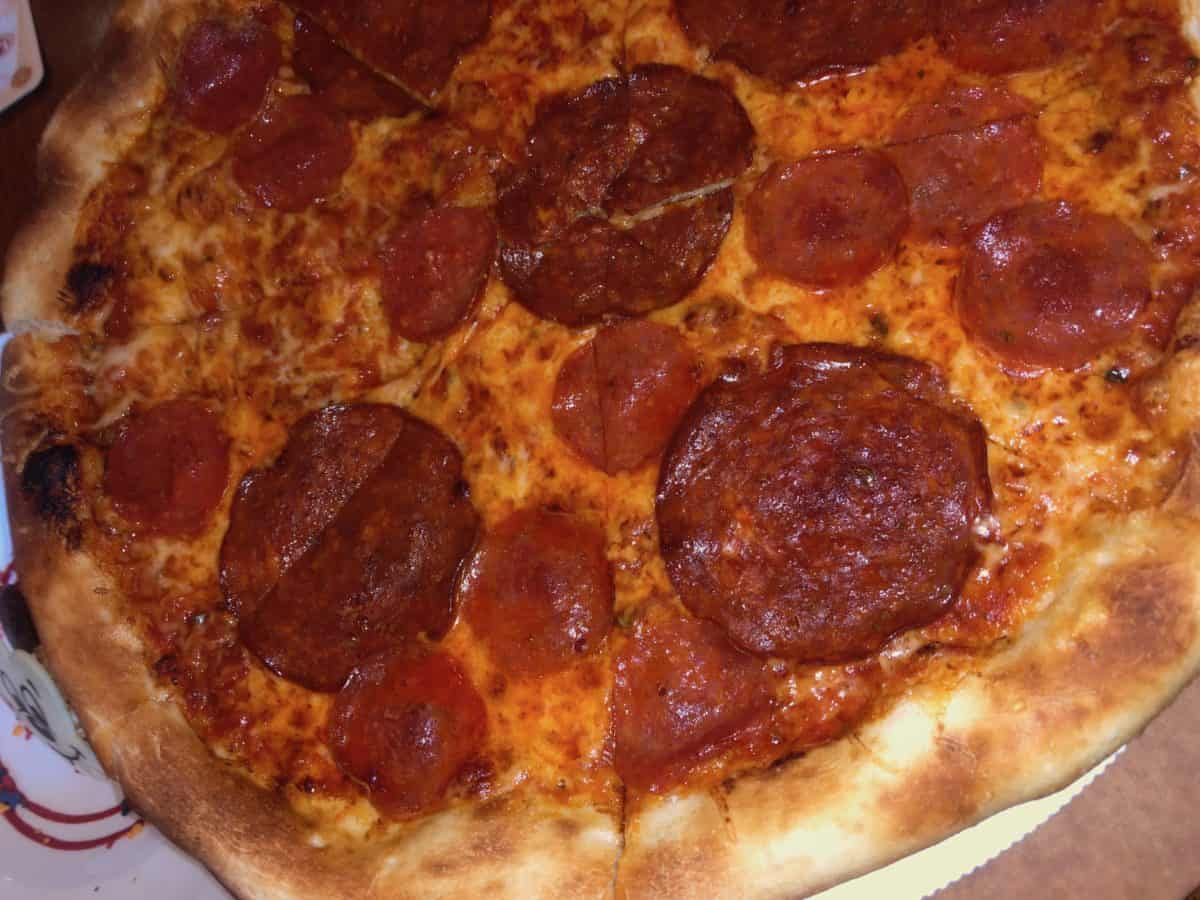 Turns out this is an entire pizza. This could easily feed 3-5 people, so at $25, it’s not the most outrageous item at the resort. The Mickey-shaped pepperoni was fun, and as someone who does not like bell peppers, I appreciate this much more than then Spectacular Mickey Pizza offered at Boardwalk Pizza and Pasta in California Adventure. 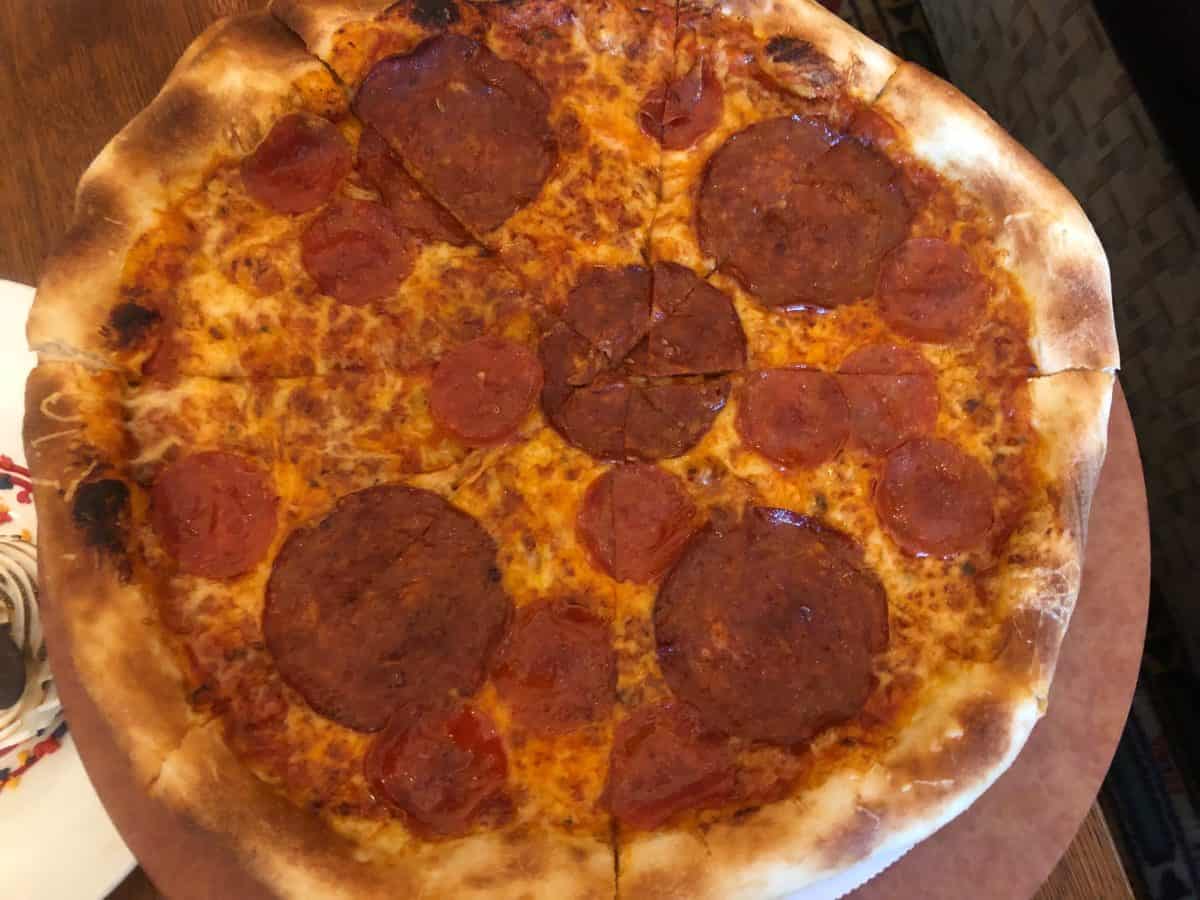 Sadly, the pizza was average. The flavor was good. The pepperoni was good. And I appreciate the more high-end cheese used, but the amount of grease was a bit disturbing. I know pepperoni pizza is usually on the greasier side, but this got ridiculous. 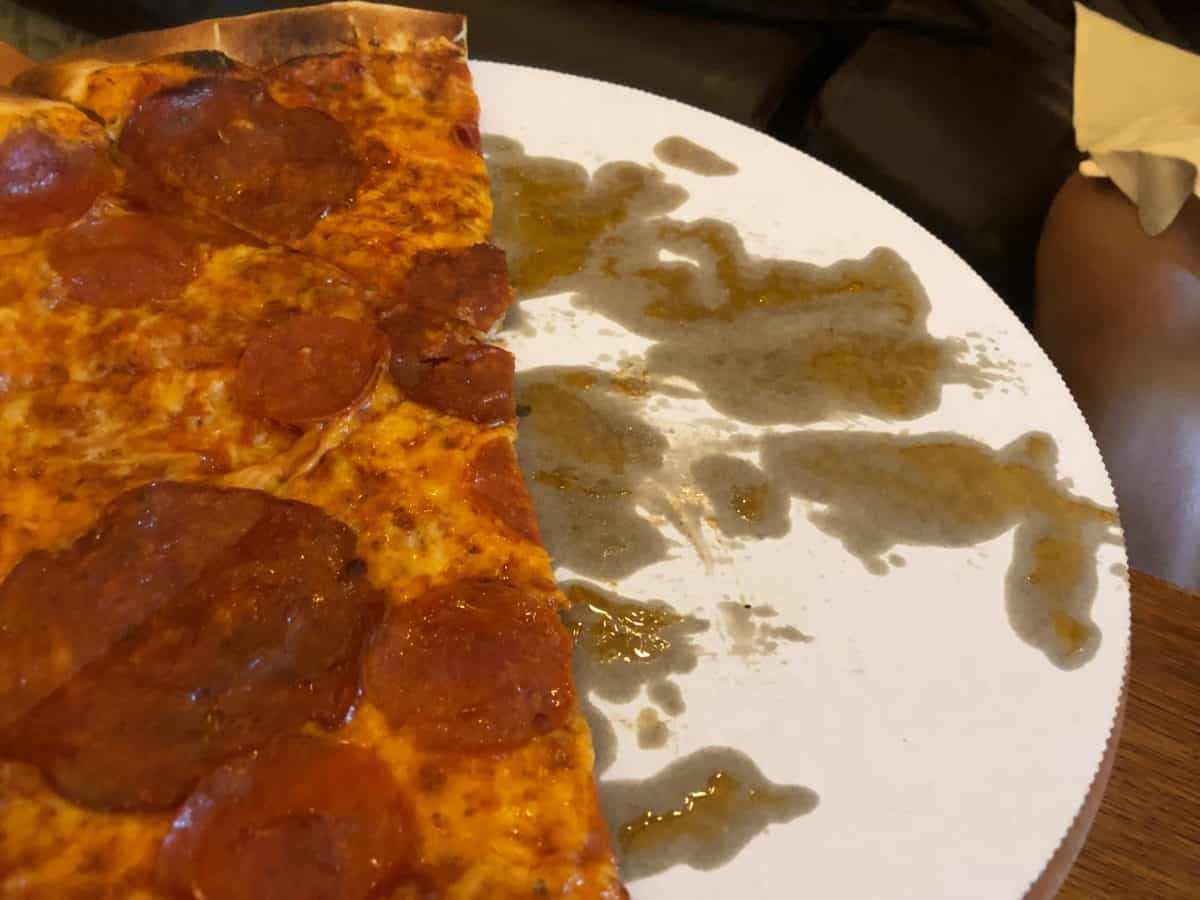 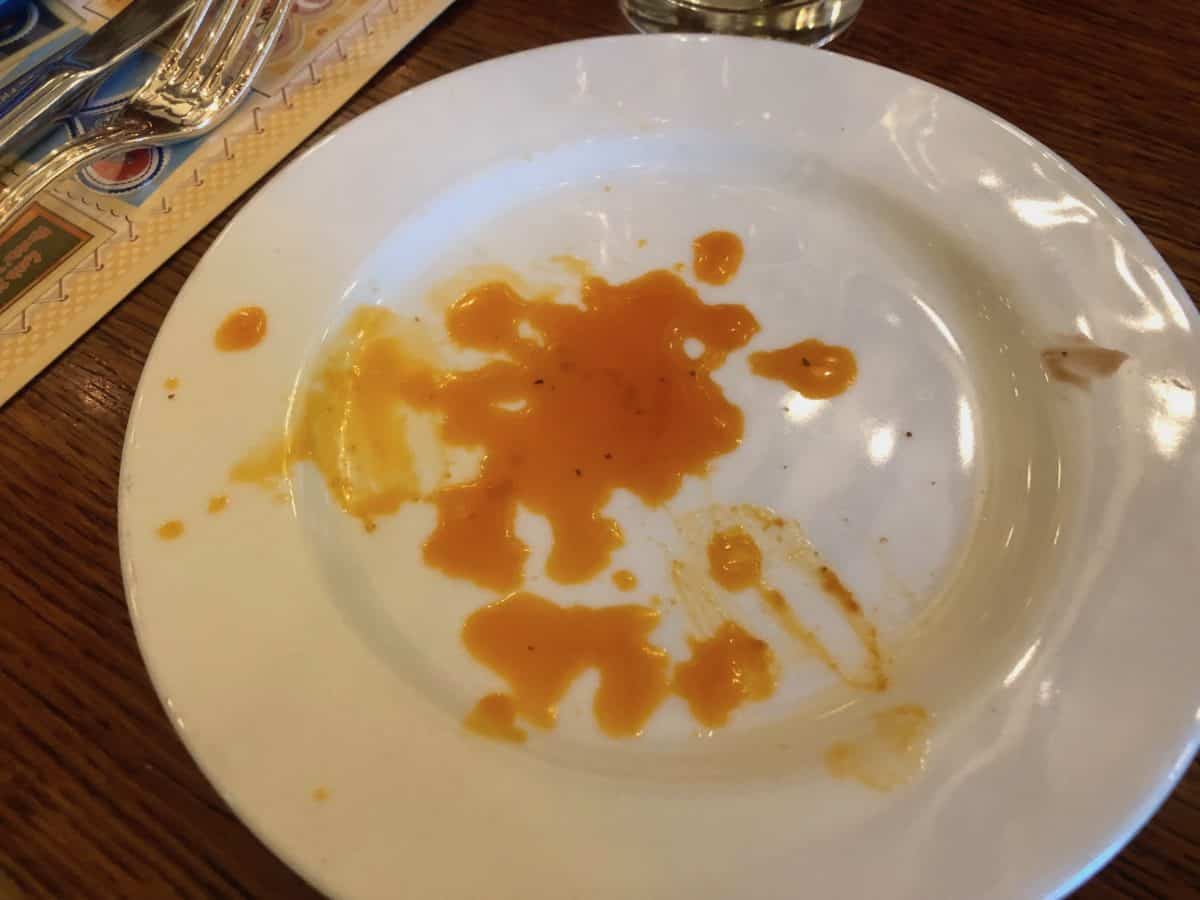 Grease aside, we still finished this. Again, it wasn’t bad, but it wasn’t outstanding. It is super thin crust and actually tasted better the more it sat when it was less floppy. The edge crust was good, but filling. 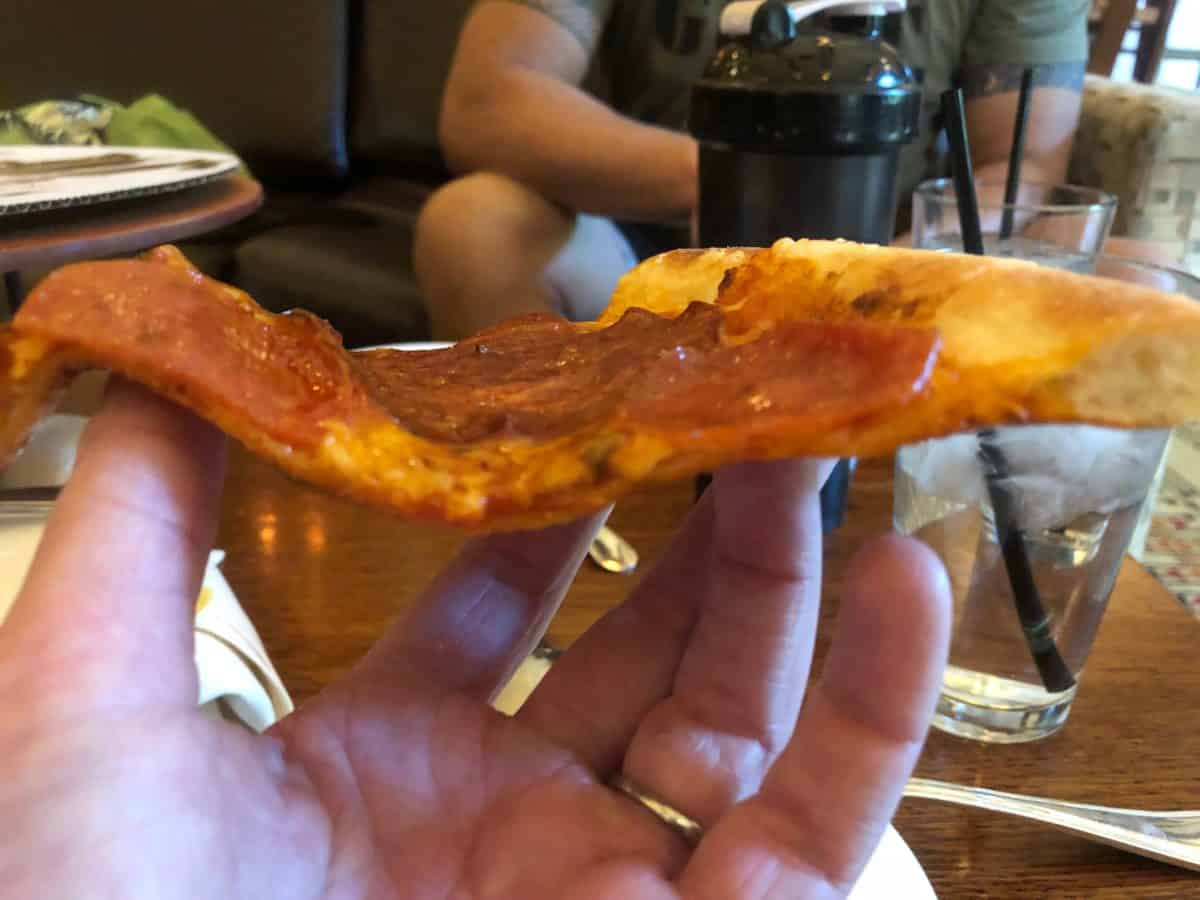 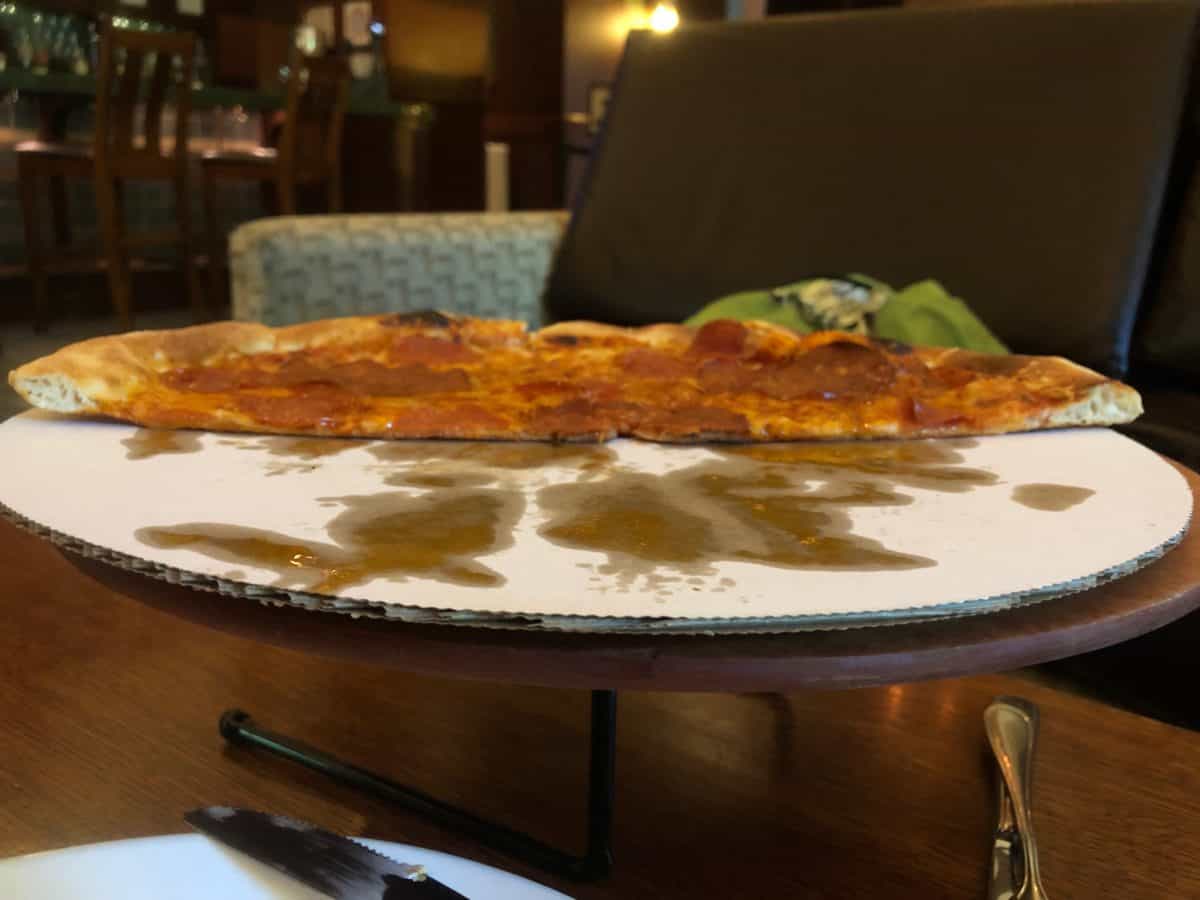 If you are looking for some fun Mickey treats to try that may not require a park ticket, then head to Downtown Disney and check out these items at the Grand Californian. We will continue to be in the parks checking out all the food, decor, and merchandise for all the celebrations.

Next
REVIEW: Rancho del Zocalo Frozen Strawberry Horchata – Get Your Ears On Celebration at Disneyland Park