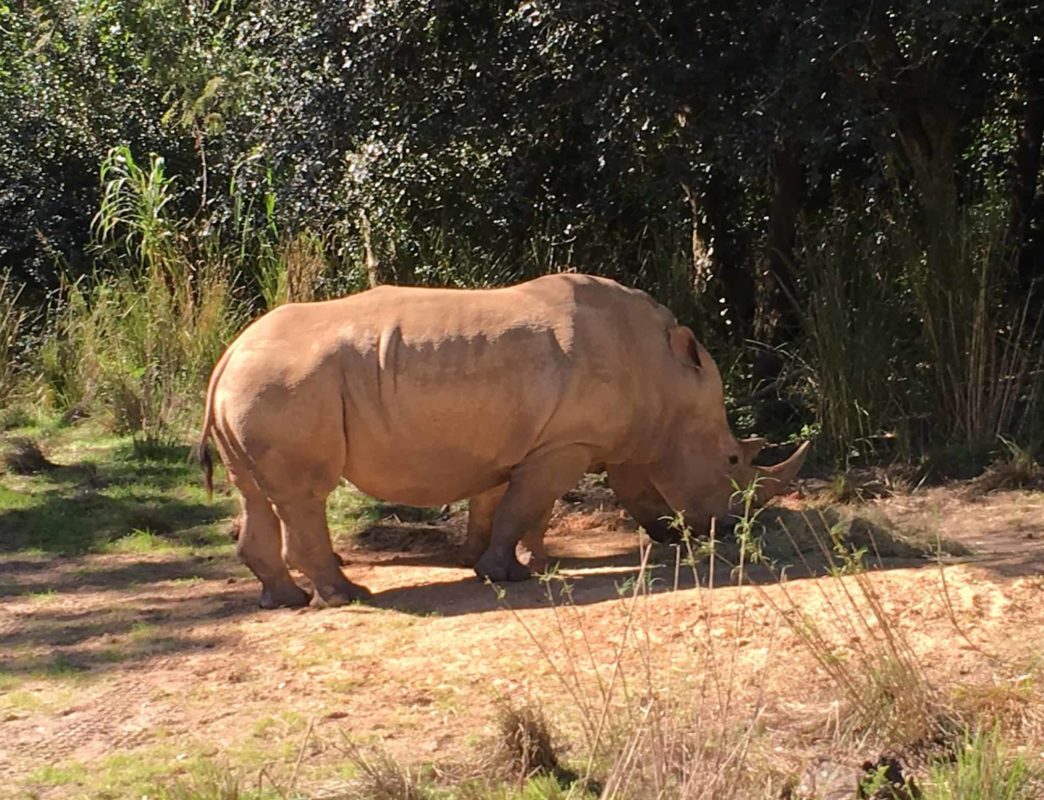 If you’ve ever wanted to know what a rhinoceros feels like, have I got the tour for you! Up Close with Rhinos is also a great choice if you love animals, Disney’s Animal Kingdom and/or the Kilimanjaro Safaris, and want to know more about what happens behind the scenes and how Disney contributes to animal conservation efforts. If you’ve never done a Disney World backstage tour before, this could be a nice “starter” option because it’s inexpensive (relatively speaking at $40) and gives you a good flavor for what a Disney backstage tour can offer. 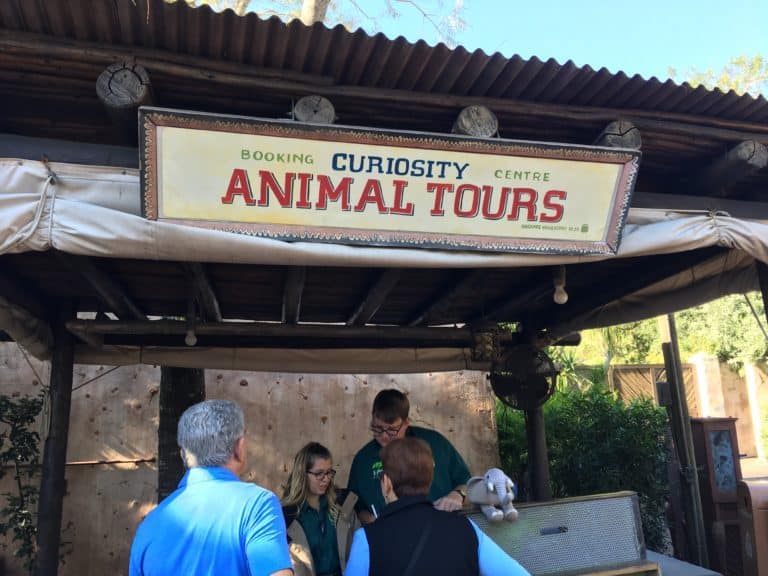 Up Close with Rhinos first began in early November. The tour takes place at 11 a.m. on select days at Disney’s Animal Kingdom. You meet at the Curiosity Animal Tours kiosk by the Kilimanjaro Safaris entrance in the Africa section of the park. It’s a small group – ours had 14 guests and we were told that was the maximum size for the tour. 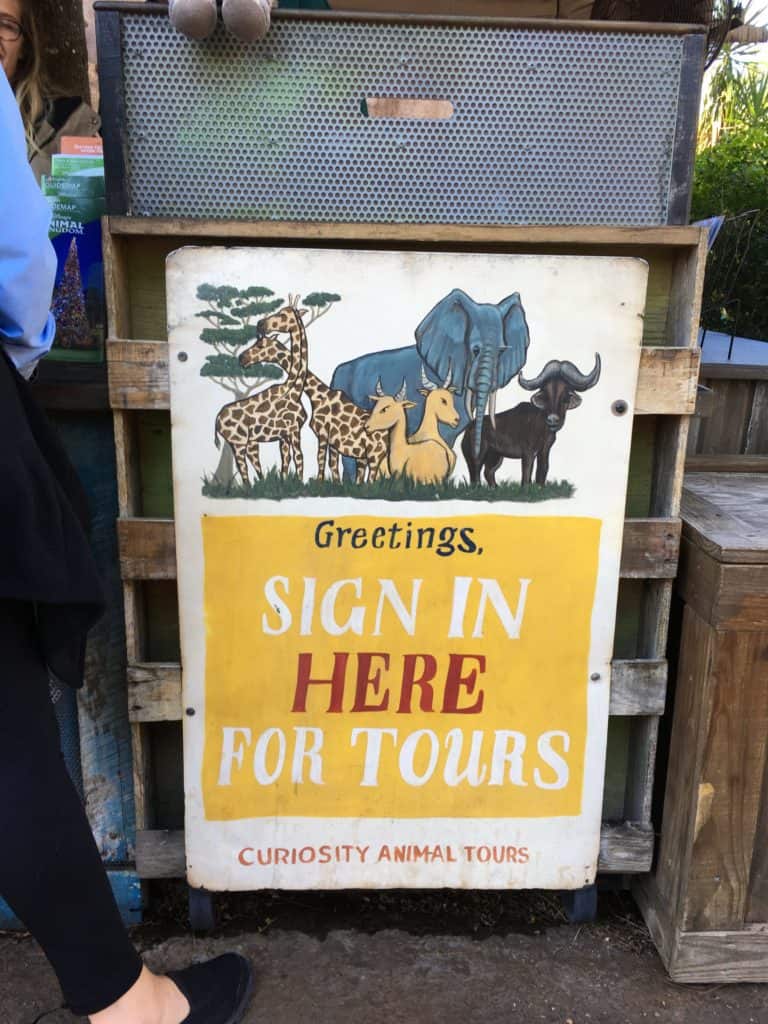 The tour begins by heading immediately backstage. You’ll walk through the gate just off to the left of the Safaris entrance and along the side of Tusker House and the show building for the Festival of the Lion King. A little off in the distance you can see the show building for the Pandora attractions. The cast member who was guiding us on this stroll pointed out the Hidden Mickey that’s formed by part of the floating mountains above the Pandora building – it’s only visible from backstage.

After a few minutes of walking, we came to our tour vehicle, Temba One. While there were some Safari vehicles parked in the lot back here, ours was just a passenger van. We piled in and buckled up, and the driver took us along the road that runs behind the Safaris area, past some Imagineering buildings and Planet Watch, to the rhinos’ home. The rhino house is located right near the elephant house, so if you’ve done the Caring for Giants tour before, everything up to this point will be very similar.

We were greeted by two of the animal specialists who work with the rhinos. They started by giving us tons of information about rhinos in general: the different species of rhinos (there are five), the fact that they are the second-largest land animals (after elephants), and the threat to their survival due to poaching. Rhino horn poaching has actually increased in popularity in the last 20 years or so. Some cultures mistakenly believe rhino horns have some sort of healing or other mythical properties. In fact, the horns made of keratin – the same material as your fingernails.

Then we got to meet some white rhinos! As we walked toward the other side of the rhino barn we were greeted by Helen and Lola, two of the five female white rhinos who live at Animal Kingdom. Helen and Lola showed off some of their training – for example, they are trained to open their mouths so the vets can inspect their teeth – and we learned more about their eating and drinking habits.

A quick aside about photography: even before we set foot backstage, we were strongly warned against taking any photos/videos. So don’t expect to get a picture of yourself with a rhino, or of anything else “behind the scenes.” Some other Disney World backstage experiences do seem to allow some photos, but this was not one of them. Our group of 14 guests had three cast members “accompanying” us (read: watching us like hawks) at the rhino house, in addition to the two animal care staff who lead the experience. My photo of the rhino below was taken during a safari ride later that day.

Then, we truly got “up close” to the rhinos! We went up in groups of two or three and were allowed to “pet” Helen.

What does a rhino feel like? My mother said “a coconut,” and I think that’s a pretty good analogy. Certainly parts of her had a very solid feel with some wiry hair. But some parts of her were also a little softer, though the skin was still tough. But I would heartily encourage you to take the tour and find out for yourself! (Note that rhino petting is NOT guaranteed on this tour; if the rhinos are not cooperating, the handlers may think it safer not to allow guests to touch the animals.)

One of the reasons Animal Kingdom is my favorite park is because it’s not just about entertaining guests. The animal care experts put a lot of work into helping conserve species and learn more about them to support their care and proliferation around the world. We learned that nine rhino babies have been born at Animal Kingdom, and that the park recently received a new male white rhino, Doogan, to breed and further increase the population. We also learned that some of the rhino babies born here have been sent to sanctuaries in their native habitats in Africa, and how the knowledge gained by working with these beautiful beasts at Animal Kingdom has benefited other zoos and animal sanctuaries around the world, especially in places that do not have access to the cutting-edge schooling and resources we do.

So whether you love animals, or just want to try a Disney backstage tour without the commitment of something like Backstage Magic, consider Up Close with Rhinos. Everyone in our group, ranging in age from children 10+ to seniors, said they enjoyed it. And if you go to Disney to make memories, well, petting a rhino isn’t something you’ll easily forget! 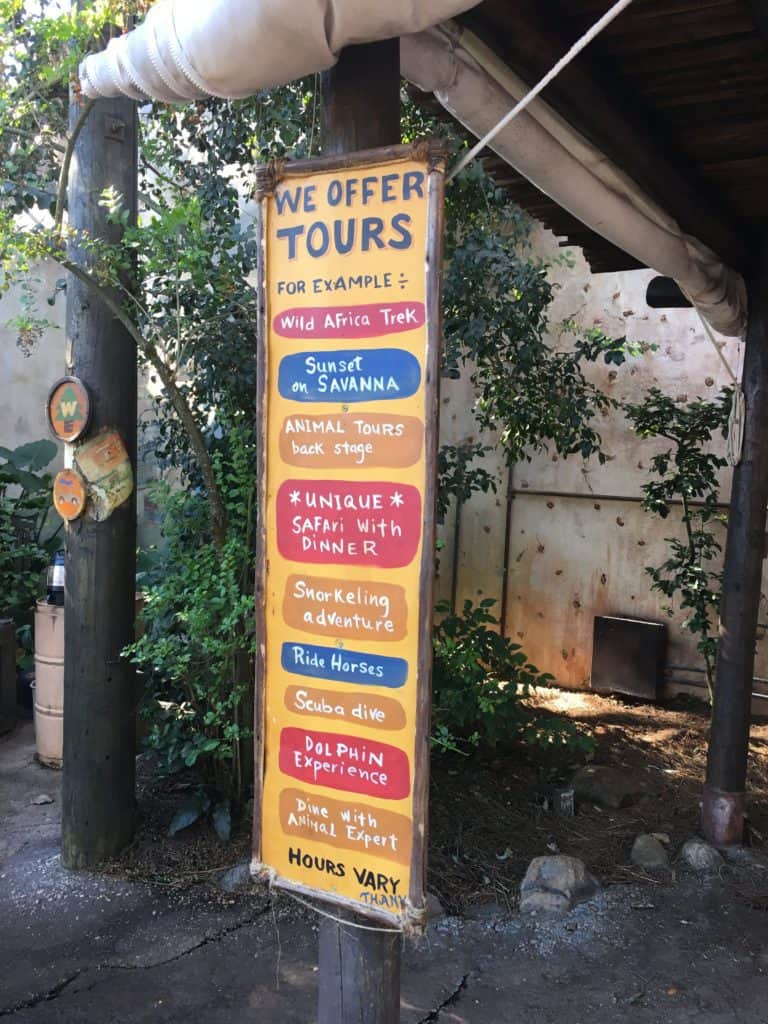 If you’re doing the tour, a few bits of advice:

Have you gone “Up Close with Rhinos”? How did you like your experience? Share it in the comments!

January Pin Releases for Disneyland & Walt Disney World, Including Festival of the Arts

3 thoughts on “REVIEW: Up Close with Rhinos Experience at Disney’s Animal Kingdom Delivers on Its Name”