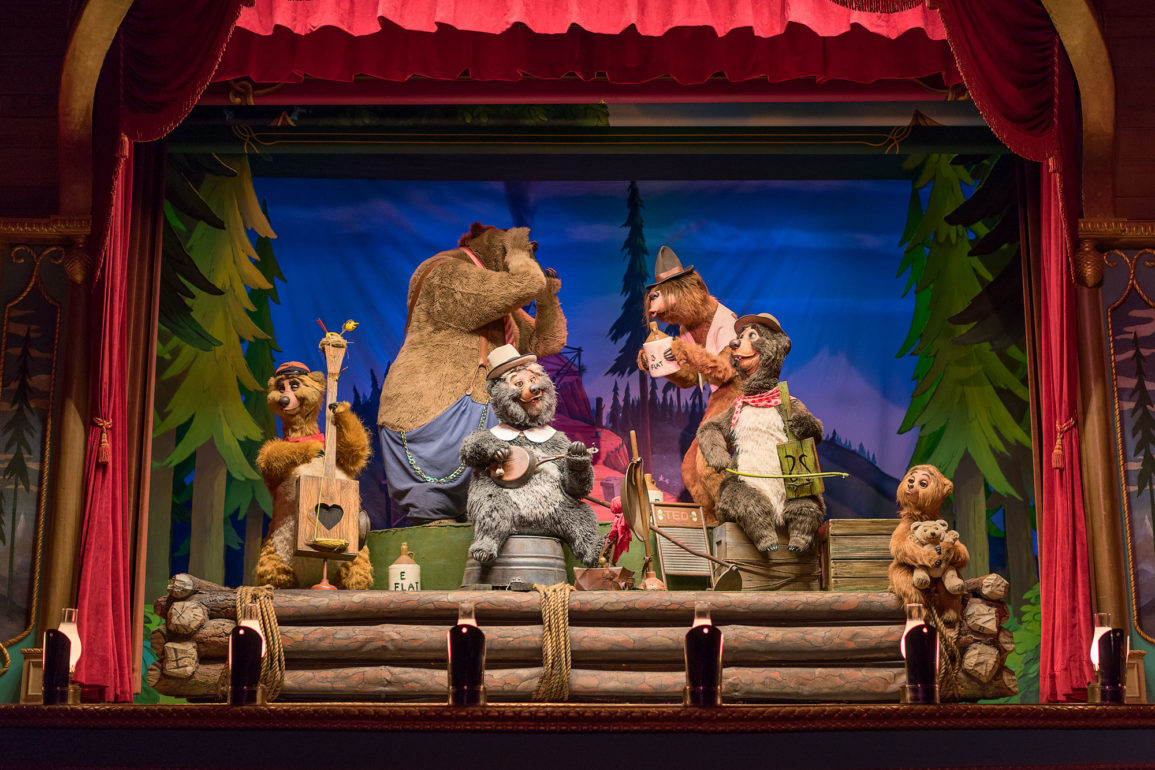 OPINION: Why the Country Bears Matter

When sources inside the Disney company suggested that Country Bear Jamboree may be on the chopping block, fans went into an uproar. Emails were sent and twitter lit up to the point that Disney themselves felt the need to “reassure” fans that the Jamboree would be around through the Magic Kingdom’s 50th anniversary (though not denying that a replacement may still be in development).

This flashpoint of nostalgic appreciation lead many in the parks community, whether they believed the rumors or not, to think about what exactly made these bears so beloved in the first place. Why keep these old bears around? 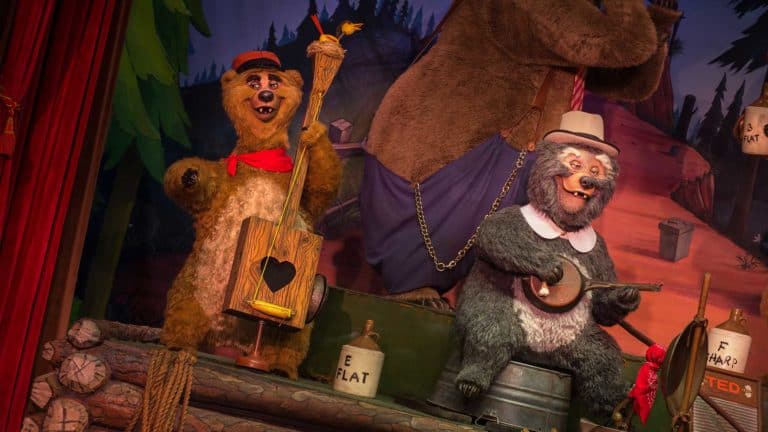 It happens every time. The guitar twangs, the spotlight grows, and, when that curtains open on that chubby bear in a red vest, the audience laughs. It’s that look on Big Al’s face. A little sad and sleepy, maybe a bit tipsy thanks to the jug by his foot, he paints a bold and instant impression. They all do. We can thank Imagineering legend Marc Davis for that.

Davis had a knack for designing characters whose rough exteriors also portrayed a rather goofy charm. He turned ghosts into grim grinning tricksters and bloodthirsty pirates into clumsy drunkards. Even when portraying real-life animals on the Jungle Cruise the creatures find themselves in sight gags that bring any passing boat a good chuckle.

Country Bears is no exception and might be the crowning achievement of Davis’s ability (along with the help of other Imagineers) to distill entire character personalities in visuals alone. Whether it’s the aptly named Liver Lips McGrowl or Wendell with his overbite and bowler cap – each bear gives us a laugh just as early concept art once did for Walt.

Maybe it’s that bittersweet connection to Walt that makes these bears extra special. As Tom Corless wrote in his recent article on the Country Bears’ possible departure, “Sometime in late 1966, Walt stopped by Imagineering and Marc showed the drawings he was working on for the Bear Band show. As Marc shared years later, Walt had a good laugh at many of the humorous characters and scenes in the show that would later become the Country Bear Jamboree. On Walt’s way out he turned to Marc and said good-bye, a phrase that Marc recalled Walt was known never to say. That was the last time Davis saw Disney, who died days later on December 15, 1966, and the Country Bear Jamboree came to be referred to as “Walt’s last laugh”.

These fur covered bumpkins might have been one of the last things to make Walt grin between heavy coughs and thoughts of his Experimental Prototype Community of Tomorrow. Though not initially conceptualized for Orlando, Country Bear Jamboree became the only original Disney World opening day attraction with Walt’s approval. While Disneyland has Walt’s creativity in its bones, Country Bear Jamboree is something Florida hold as a little piece of Walt all for themselves.

Rather unfairly, Country Bear Jamboree gets pegged by culture at large as a creaky show of yesteryear, too often clumped into jokes with inferior (though beloved) robotic musicians such as The Rock-afire Explosion of Showbiz Pizza Place fame. With its aw-shucks nature and down home whimsy, the post-modern cynics tend to think it’s something that would work better in Branson. Even Disney has made a less than subtle crack with Lester’s Possum Park in “A Goofy Movie.”

The truth is that Country Bear Jamboree, though in need of a full blown refurb, is far from toothless in its comedy and, at times, downright dark. Three of your hosts are the mounted heads of hunted animals and Big Al croons about “blood all around.” Things also get a bit wild as Henry plans to get a ladder and see Swingin’ Teddi Barra and the Sun Bonnet trio sing about getting turned on (and turned down). Let’s also not forget Wendell’s desire to shoot little Buford. Mickey Mouse stuff indeed.

Due to the script, the show’s humor is sometimes characterized as not politically correct, but that definition misses the intention of the joke’s entirely. There is a self-awareness – a giddy thrill from the Bears themselves that what they’re saying is a bit blush-worthy. It’s in that deep chuckle Big Al gives as the curtain closes on his morbid number. “I think you should shoot him instead” may leave your mouth agape, but “Yes, we only have high class stuff on this show” is what really makes you belly over.

It’s that style of irreverence that not only cements Country Bears as timeless, but also groups them in with another crew of misfits that just want to put on a show.

There is a certain tonal similarity between the Country Bears and The Muppet Show. Call them long lost cousins who never met, but still somehow act similar. Each have a host attempting to keep the show rolling as a bevy of performers sing and commentary comes in from the sidelines.

It’s doubtful that the Muppet Show, which came out five years after Bears, was influenced by its predecessor, but both use vaudevillian tradition as a bouncing off point for behind-the-scenes hijinks that end up onstage. They are akin in their love of not only entertaining their audience, but welcoming us in on the madness. 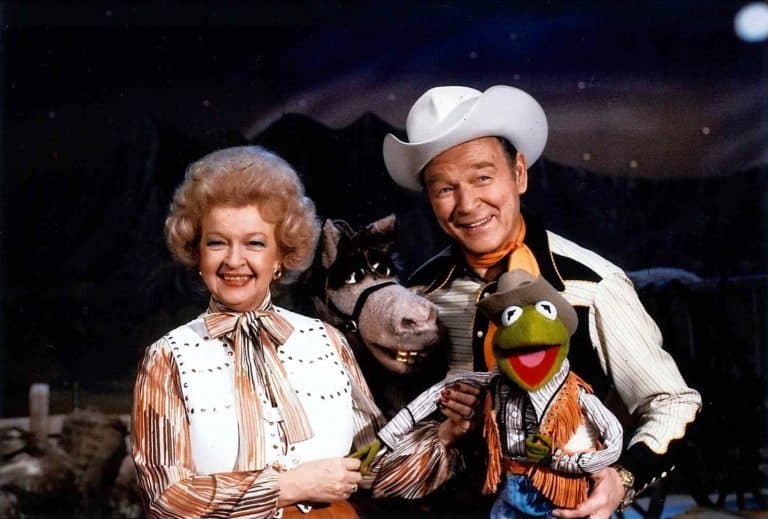 “We’re just one big happy family,” states Henry and it’s clear we’re welcome into their kin, an odd mess as it is, if we so choose. What other park’s show gives you that feeling of camaraderie with its characters, besides maybe Muppet Vision 3-D? Tiki Room points you towards the exit while Bears, with all it’s country charm, beckons, “Ya’ll come back now, ya hear?”

Sadly, the comparison with the Muppets is also apt as Disney seems lost on how to treat either property in the parks. Perhaps it’s because the old showman spirit found in both isn’t really what Disney is focused on anymore – its nostalgic form in contrast to the slick synergy laden plans so beloved by the current pencil pushers in charge.

But, for now, Grizzly Hall and it’s furry inhabitants remain and we can only hope they won’t go into hibernation any time soon.

Next
Oswald the Lucky Rabbit Animated Series Coming to Disney+