REVIEW: The All-New NBA Experience Misses Every Shot We Gave It at Disney Springs

It was announced in June of 2015 that the nostalgic Disney Quest would close for good as a new experience would take its place in 2019. That experience would come to be the NBA Experience. We recently brought you a first look of the all-new NBA Store, which opened to the public earlier this month. As we draw closer to the grand opening of this new offering on August 12th, we actually got a chance to be among the first to experience it. While we were extremely hopeful that this new offering would be a fresh, new experience that served as a much-needed overhaul of what Disney Quest once was, we were instead given a boring, careless tourist trap with a theme that is so specific to one audience, that I can’t ever see myself returning. Let’s take a look at what went wrong here. 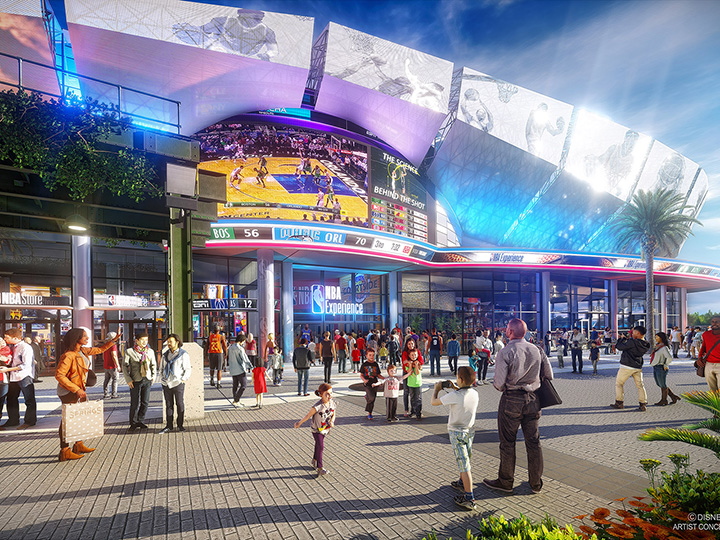 While we were invited to take as much video and photos as we liked, the one request of the NBA Experience staff was that we hold off on sharing them until they officially open on August 12th. We’ll try to do our best to paint the scene for you.

When you first walk in, the main middle area features a variety of flashing lights and bright screens. It resembles the experience of actually walking out onto a basketball court. Upon arrival, Cast Members inform you of the interactive elements included in the experience and encourage you to “register” at one of the kiosks located around the main area. These kiosks are where you tap your MagicBand and personalize your own NBA experience. You are prompted to enter your age, favorite NBA team, basketball skill level, and create a nickname for yourself which will all be used throughout the experience. These personalization options are a great use of the MagicBand system, however throughout the experience, I didn’t feel that it was executed as well as it could’ve been. More on that later.

The experiences include tests of physical skill such as “Dribble!” “Dunk!” and “Combine!”, museum-like learning experiences like “Players” and the two films, photo opportunities like “Champions” and “Draft Day”, and interactive games like “Slingshot” and “Trivia”. The layout of each experience resembles Disney Quest almost exactly. There is one big space in the middle, and each experience is nestled in its own little corner of the room.

The physical skill-based experiences were probably the most disappointing and poorly put together part of the whole experience. The entire time I was participating in each skill challenge, all I could think to myself was “I could do this exact same thing at my local Rec Center’s basketball court”. The Combine challenge was an experience where you could measure your wing span, jump height, and shoot a couple basketballs into a hoop (similar to a High School gym class.) It was surrounded with such a complex netting system, that I was more focused on shooting the ball over the net to avoid it bouncing right back into my face, than I was getting it in the hoop. Additionally, the experience had NO audio whatsoever. All directions were confusingly projected onto a wall and I was just awkwardly standing there in silence the entire time, wondering if I was doing it correctly.

The “Dribble!” challenge was by far the worst individual experience of them all. While this challenge at least provided some directional audio, I actually preferred it didn’t. Here, you stand in front of a camera with a basketball and are instructed to dribble the basketball. First with your dominant hand, then with your non-dominant hand, and finally alternating between the two. The camera is supposed to track the ball movement and record your accuracy but, unless I’m truly that bad at dribbling a basketball, it doesn’t work very well. The experience is boring and completely forgetful.

The “Dunk!” challenge was one of the more entertaining options. Here, you started with a basketball and a very short hoop. You can practice your dunk as the hoop can be raised until it reaches a difficult 10 feet, ending the challenge. This was probably the only challenge that actually resulted in me breaking a sweat.

The final physical challenge was “Shoot!”, which was a neat opportunity to play on a large (though not regulation size), professional-looking NBA court. You were paired up with a Cast Member and were assisted to one side of the court (one player per side). The Cast Member would then pass balls to you as you ran around the three point line trying to make as many as you could as quickly as you could. There was a virtual crowd projected on the wall that would cheer you on as you made baskets, however at my skill level, I didn’t make many. This was an enjoyable experience that allowed for interaction with employees and the chance to feel like you’re actually playing on a court.

The interactive games have a ton of potential, yet most of them either have an “underdone” feel like the arcade, or straight up don’t work, like “Slingshot!”

The Arcade is, quite literally, a massive row of basketball hoop games (yes, like the kind you find at Chuck E. Cheese) and Xbox trials of NBA-related games like NBA 2k19. That’s it. We spent a total of around 5 minutes in the arcade before getting bored.

The Trivia area had a lot of potential to be fun, had it been a little more busy. There are approximately 20 stations, allowing for up to 20 people to compete against each other and have their score displayed on one big leader board at the front of the room. We were the only two people playing at the time, which caused it to be boring and felt as though we weren’t competing. The questions were challenging and the interface between the kiosk and the large screen at the front of the room worked well.

The Replay area was extremely hidden as the windows to the experience are covered, and the sign is so vague, you don’t even realize it’s there until a Cast Member invites you in. This game allows you to make the call as to wether or not an NBA play was a good or bad call, similar to the NBA Replay Center in New Jersey. Features like zoom, pause, and change angle allow you to get a close look at what actually happened during the play, and you then hit “confirm” or “overturn” to make your decision.

Finally, the Slingshot challenge had the most potential of all to be a great and unique new game. The premise of the game was to shoot foam balls into basketball hoops using slingshots. It fell short because it just didn’t work. The slingshots themselves didn’t pull back far enough, causing the foam balls to fall short of the hoop every time. If you angled the slingshot correctly and pulled back just a little farther than what I would have considered safe, the ball does make it to the hoop, but is still extremely difficult to make in as it bounces out often. Throughout our entire 3-4 minute round, neither myself or my partner got a single ball through the hoop, which was pretty disappointing.

The two photo opportunities at the experience work similarly to PhotoPass, except they are machine-based instead of working with an actual photographer, which is disappointing in itself. The Champions photo allows you to tap in with your MagicBand, and the machine takes a series of three pictures of you pretending to hoist the Larry O’Brien Championship Trophy, and the NBA MVP award trophy. The photos are well-themed as a backdrop filled with confetti makes it look like you really did just win a championship, but the photos are taken quickly and there isn’t much opportunity for posing like there would be with a PhotoPass photographer.

The other photo experience, “Draft Day” allows you to be selected by your favorite NBA team and have another series of three photos taken next to a wax model of NBA Commissioner Adam Silver. When you tap into the photo kiosk, your personalized username and favorite team are displayed on the screen behind you, which creates an amazing, personalized photo which makes it look like you were actually drafted by your favorite team. Again, having a PhotoPass photographer with things like props could make this experience a lot more enjoyable, but as we’ve seen before, the machines are slowly taking over Walt Disney World.

Players – Inside the Player Sanctuary

The Players experience was a museum-like display which felt like you were stepping into an actual NBA locker room. Each locker was filled with NBA memorabilia, shoes, jerseys, and other typical locker room finds. In between each locker there was a large touch screen which you could interact with to view current NBA team rosters, statistics, and league standings. It was a neat touch, but again, I found myself thinking “I could have just Googled this.”

The two films are located in the very back corner of the first floor, the entry area is composed of literal gray walls and vague signs. We didn’t even realize it was part of the experience until we were on our way out because of how poorly themed it was. There are two movies composed of 10 minutes each.

Overall, the interactive elements were disappointing as there was a huge lack of actual incorporation of the elements into the experiences. Besides showing my favorite team’s logo and username on the screens in an effort to display leader boards and keep score for things like Trivia, and Slingshot, and with the one exception of displaying your favorite team and username on Draft Day, there was virtually no other incorporation of the customizable elements. Most of the experience was MagicBand-oriented and you had to “tap in” at every single experience, so I hope to see a more broad use of the personalization after grand opening and on the My Disney Experience app.

This experience was designed for the true, die-hard NBA or basketball fan. I can’t realistically see any other demographic spending the hefty $35 to get into this experience and actually enjoy it. Not even kids have a lot to do here, as most of the experience is NBA regulation-sized basketballs and hoops, making it difficult for kids to enjoy. I really don’t even think the general sports fan will enjoy this. It’s so specific to all things basketball that I think they’ve made their demographic too small, and when you combine that with the lazy, poorly put-together experiences, this one is a huge fail in my book.

Could the typical theme park tourist fall for this type of experience purely because of the familiar NBA branding? Do you think this will be a success for the general public or a failure like Disney Quest? Sound off in the comments and go Magic!