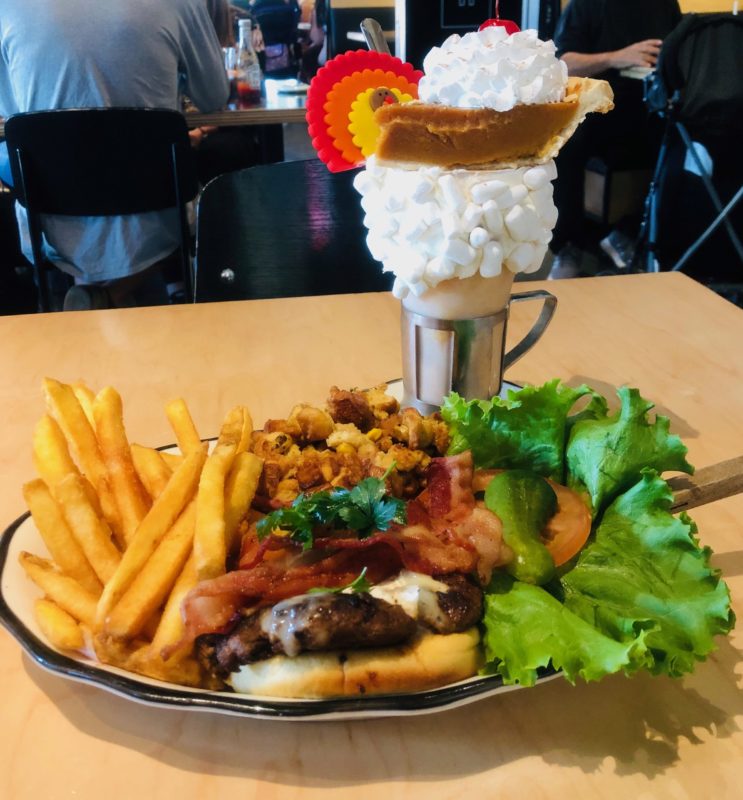 We were invited by Black Tap to try out this limited-time CrazyShake below, free of charge. However, our thoughts and opinions are 100% our own.

Black Tap in Downtown Disney at the Disneyland Resort is celebrating Thanksgiving with a new limited-time Pumpkin Pie CrazyShake and a Thanksgiving Turkey Burger. From October 25th – November 28th, 2019, you can stop by Black Tap and try either offering. Quantities are limited daily, so you may want to go earlier in the day. These are also only offered for those who dine in.

This is a pumpkin spice shake with a vanilla frosted rim with mini marshmallows, topped with a pumpkin pie slice, marzipan turkey pop, whipped cream and a cherry. 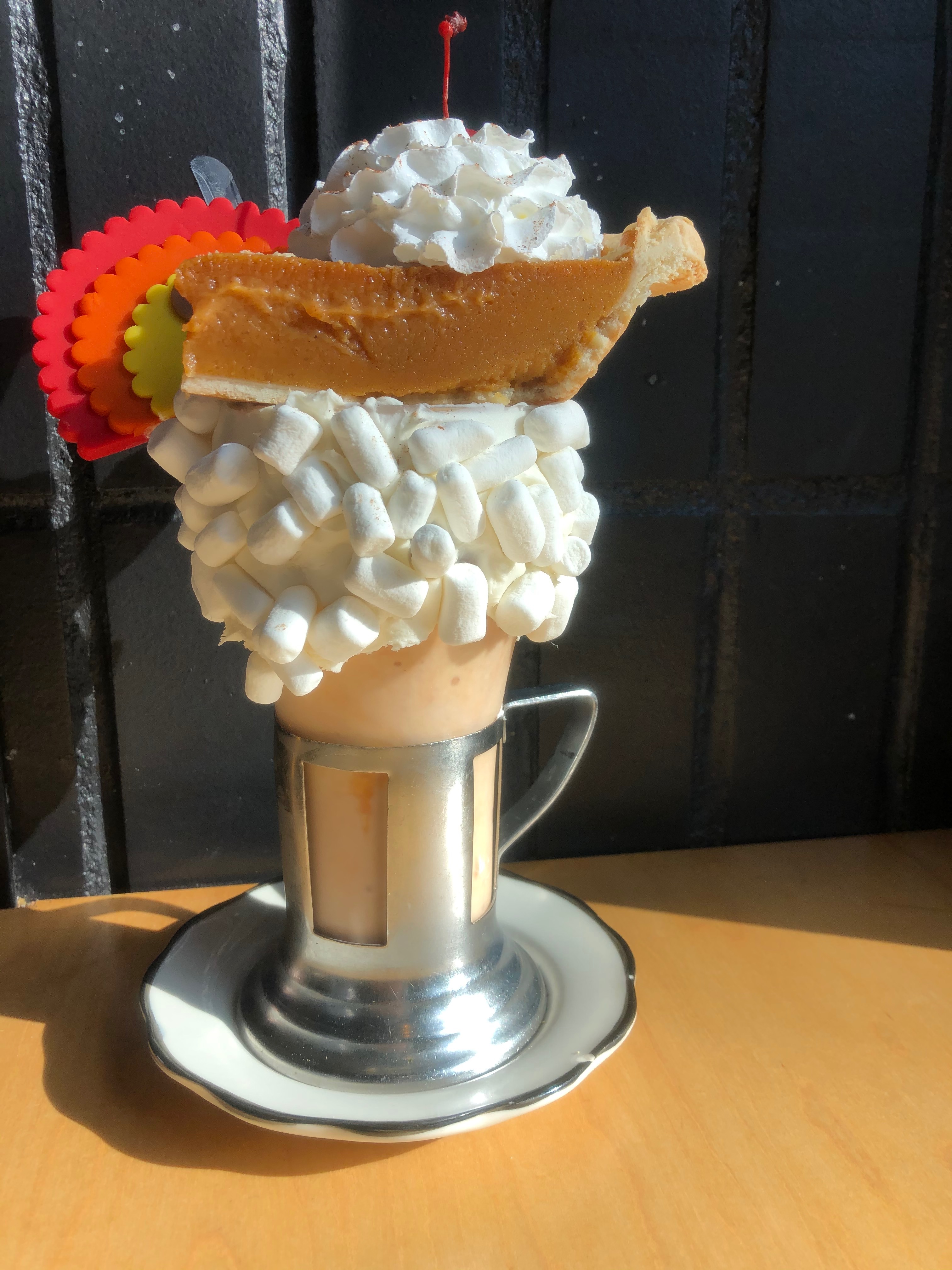 The marzipan turkey pop can get a bit hidden behind the massive slice of pumpkin pie. 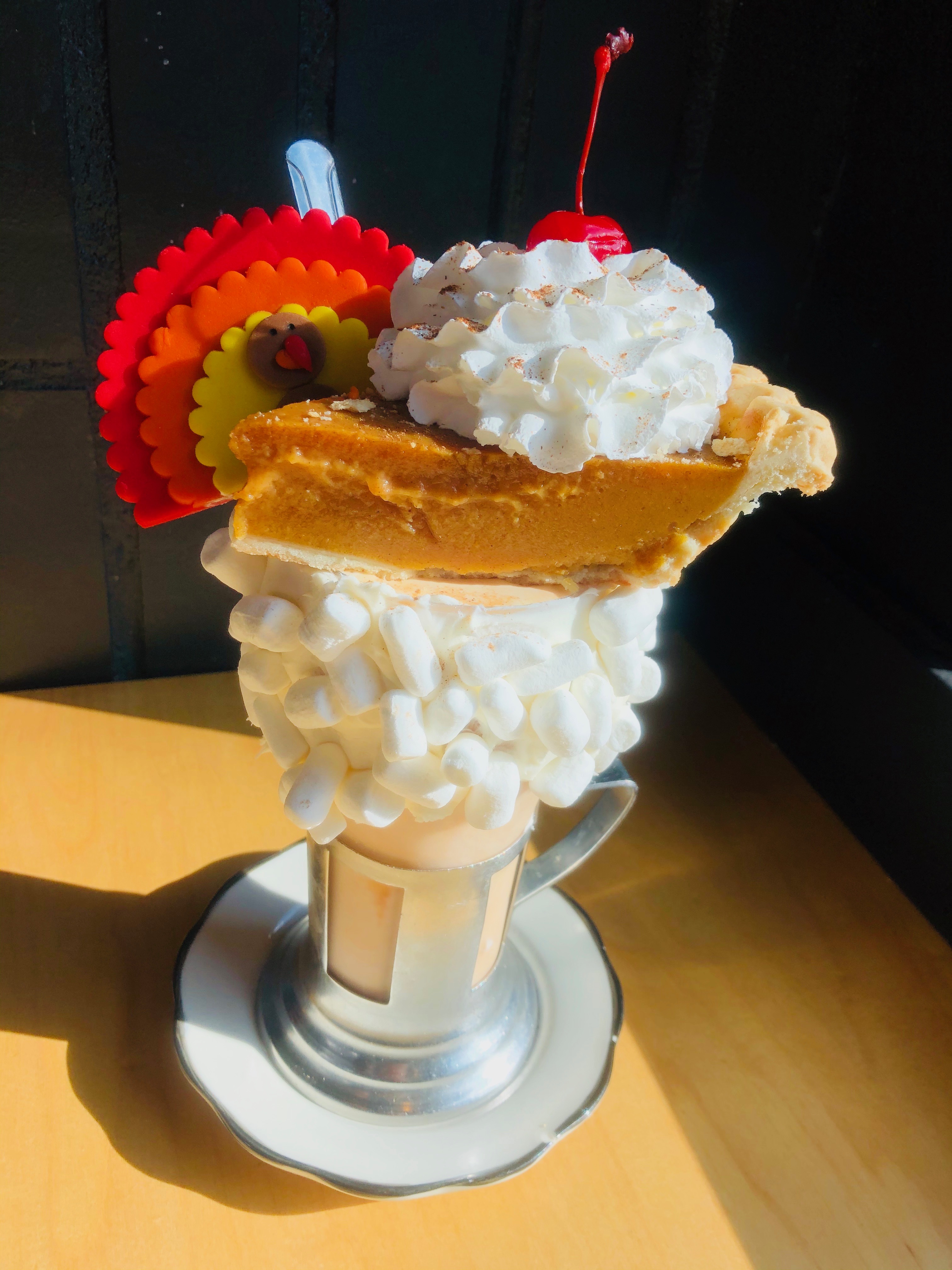 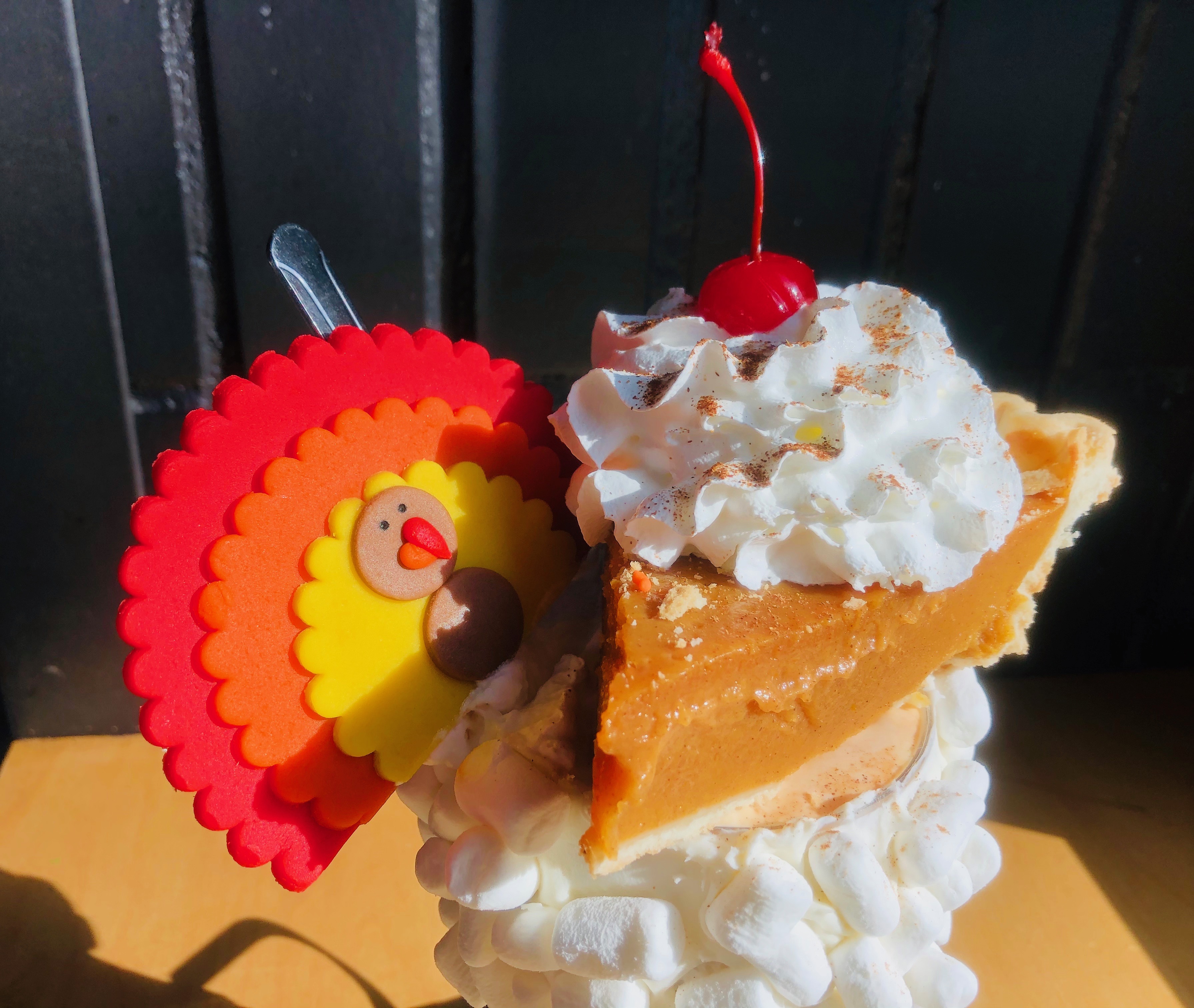 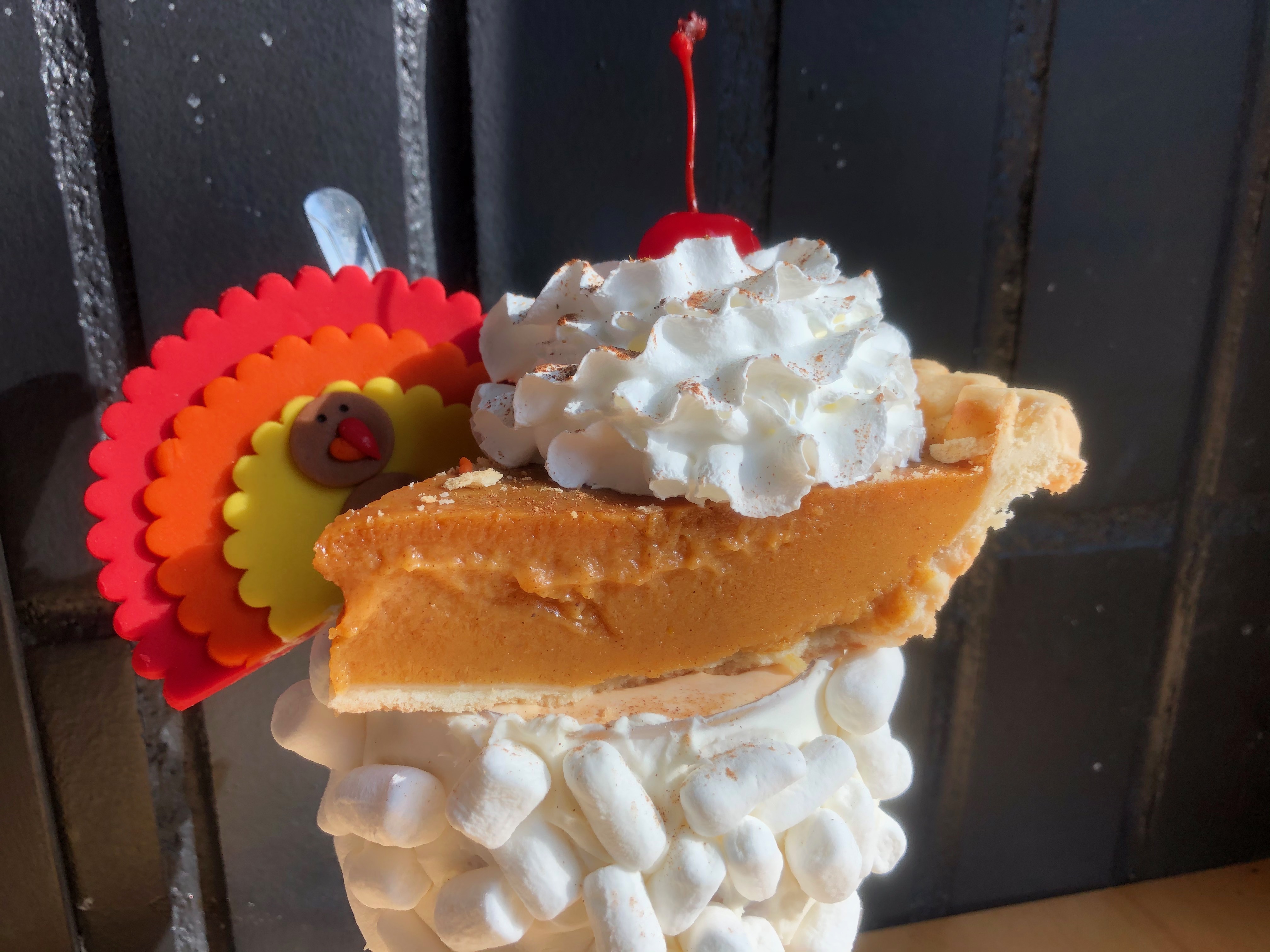 Once you get past the huge slice of pumpkin pie, this is a fairly straightforward pumpkin spice shake. 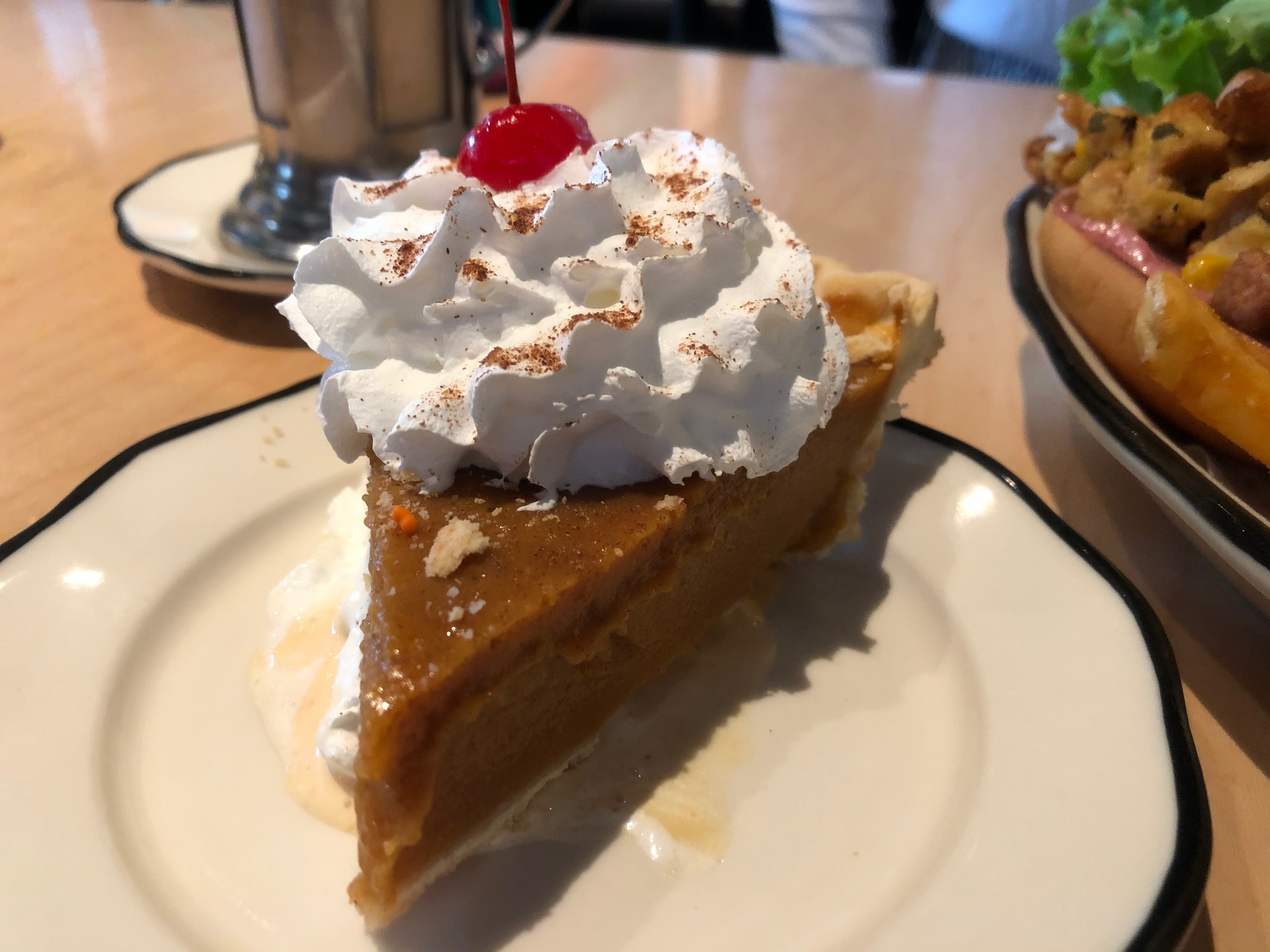 The actual pumpkin pie slice was great. Any pumpkin fan would be thrilled with this alone. The crust is flaky and buttery, and the pumpkin base had just enough sweetness to offset the pumpkin flavor. The texture was smooth with a touch of pumpkin spice added to the whipped cream. It was simple and well done. 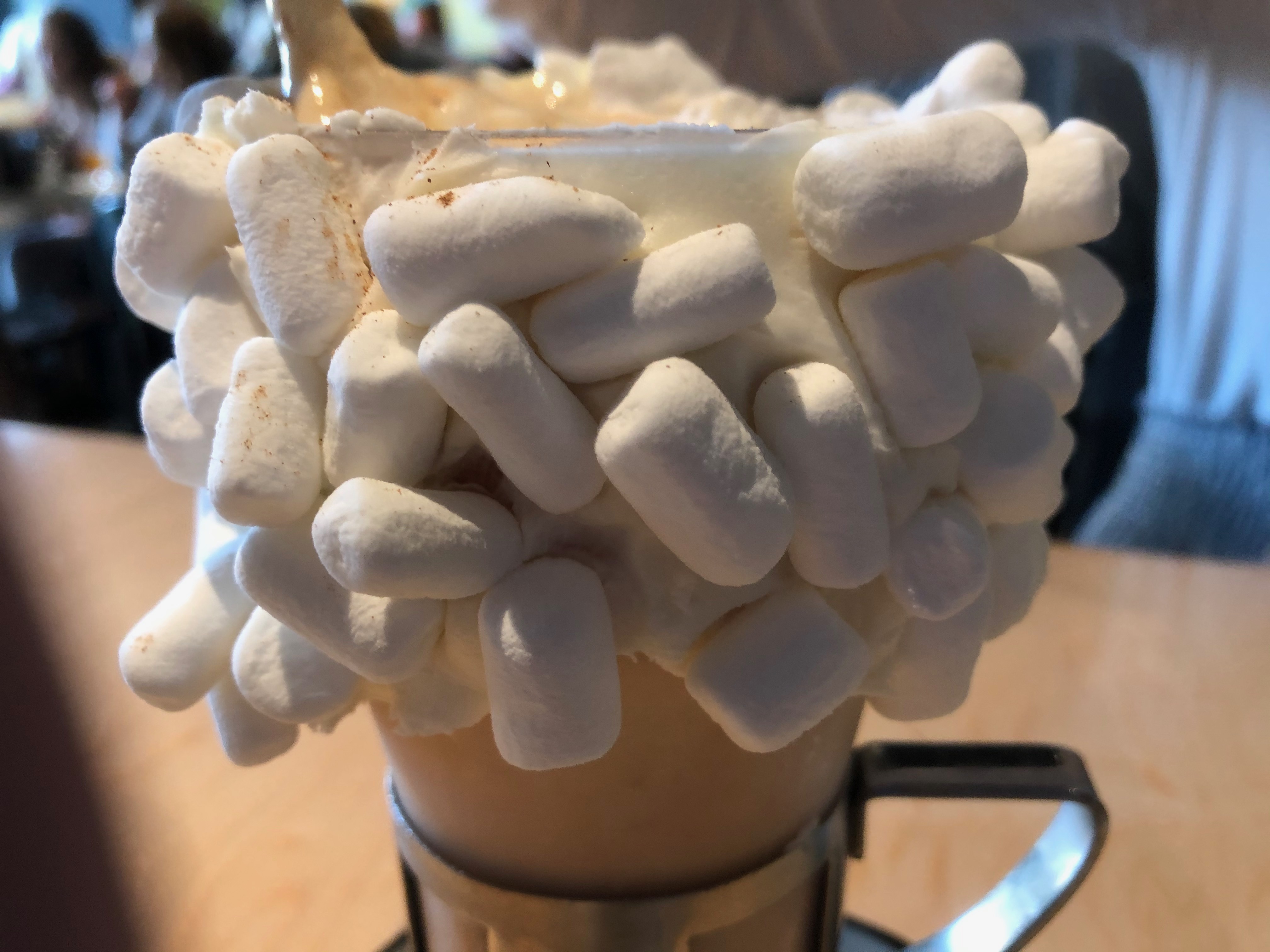 The vanilla frosted rim is fun, with mini marshmallows attached. You can pick these off and nibble and even smear some extra frosting on them for added fun. 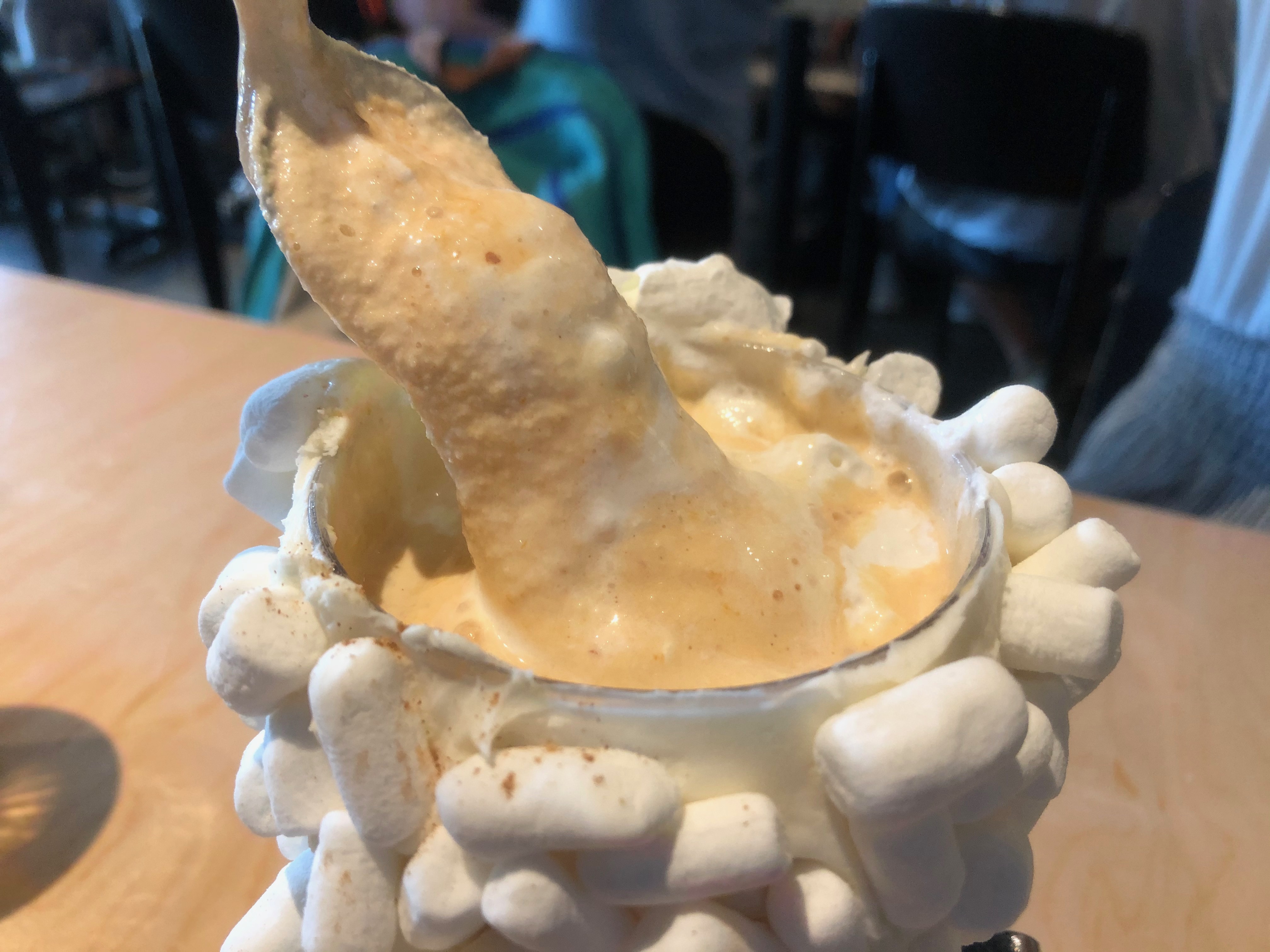 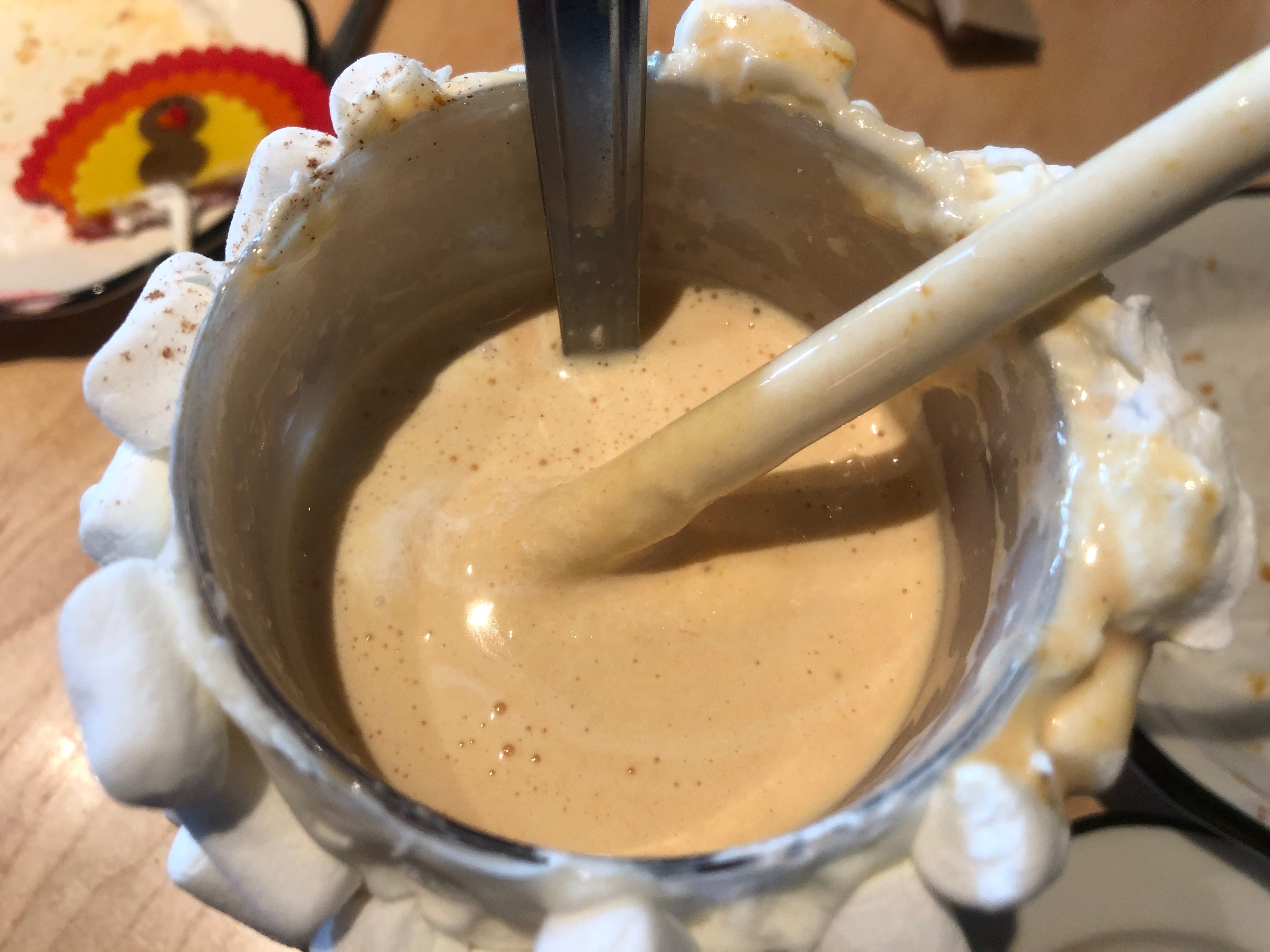 The shake itself has a good thickness where it is drinkable, but also thick enough that you know it is a freshly made milkshake. The vanilla base was not too sweet and the addition of the pumpkin spice flavor wasn’t overpowering. If you are not a huge fan of pumpkin, you can probably skip this, but one of us was not a huge pumpkin spice fan and still found this very drinkable and enjoyable. 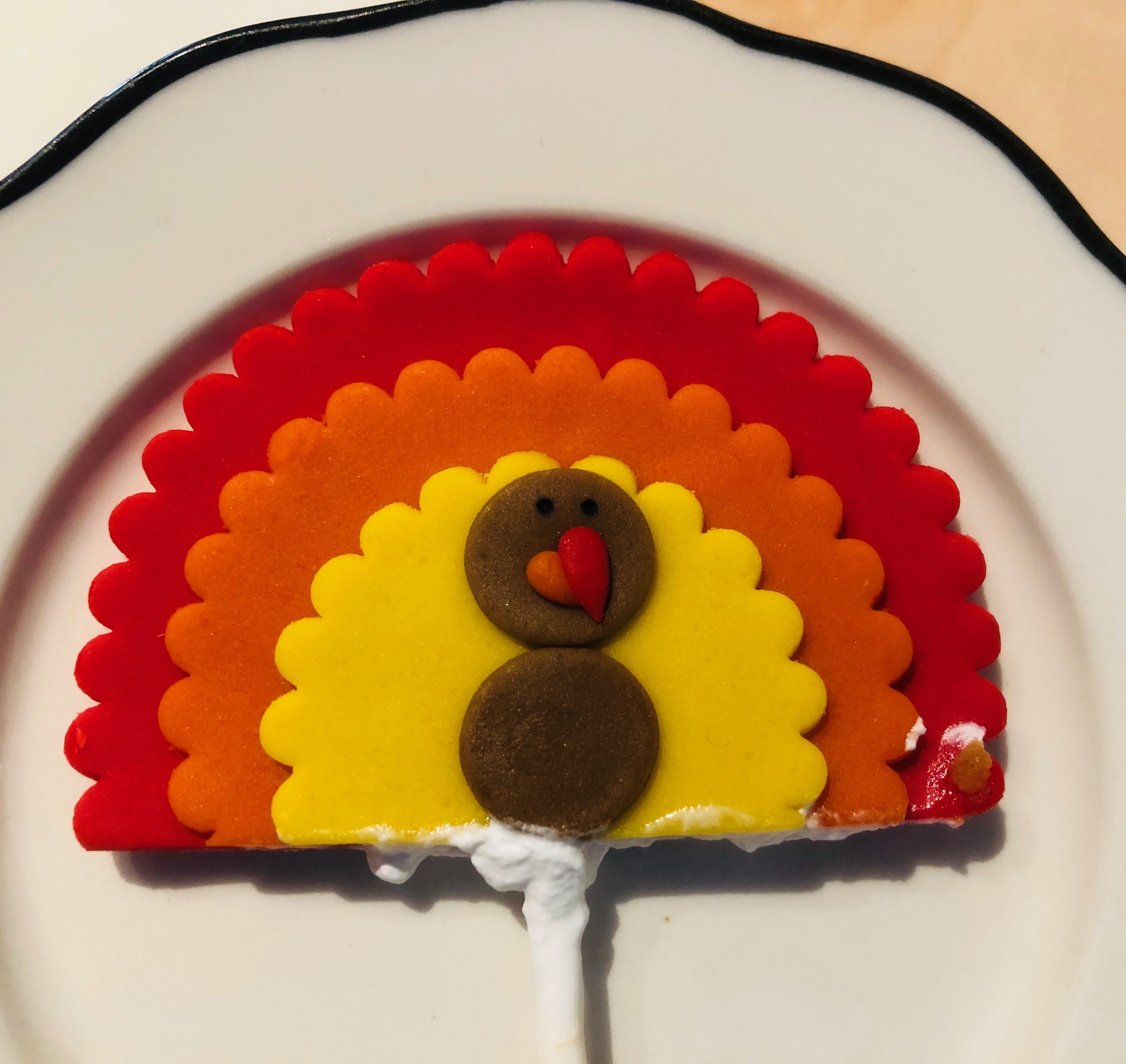 The star of this shake is the marzipan turkey. After you snag all your pictures you can snack away on him. If you aren’t a fan of marzipan, he is easily set aside. He was pretty sweet and just tasted like sugar, so we didn’t get past a few bites, but if you like marzipan, then you can take this to go! 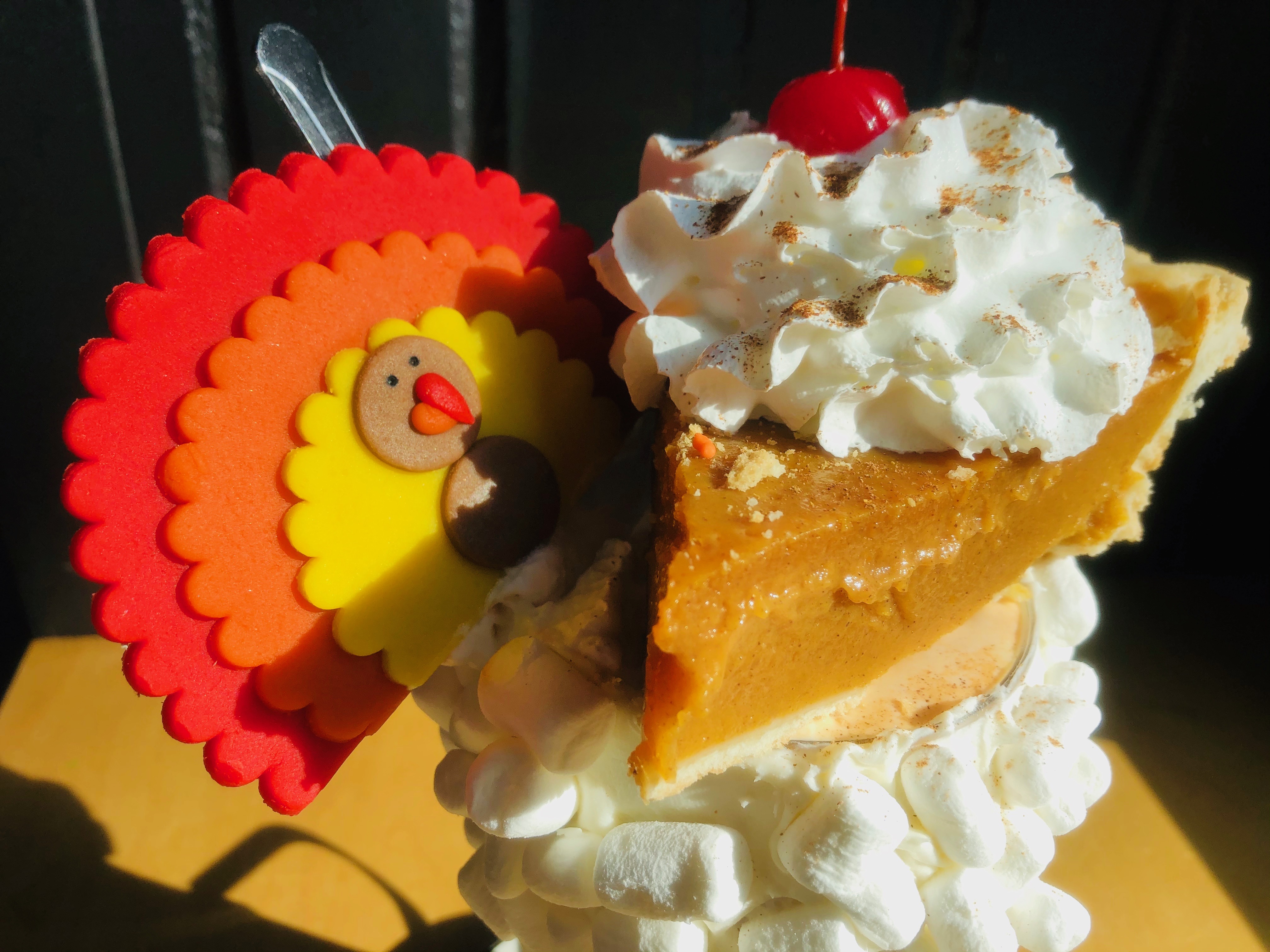 Overall, this is another great seasonal CrazyShake that was well done, and while it may look over-the-top, the flavors were well done and simple – vanilla, pumpkin, pumpkin spice. 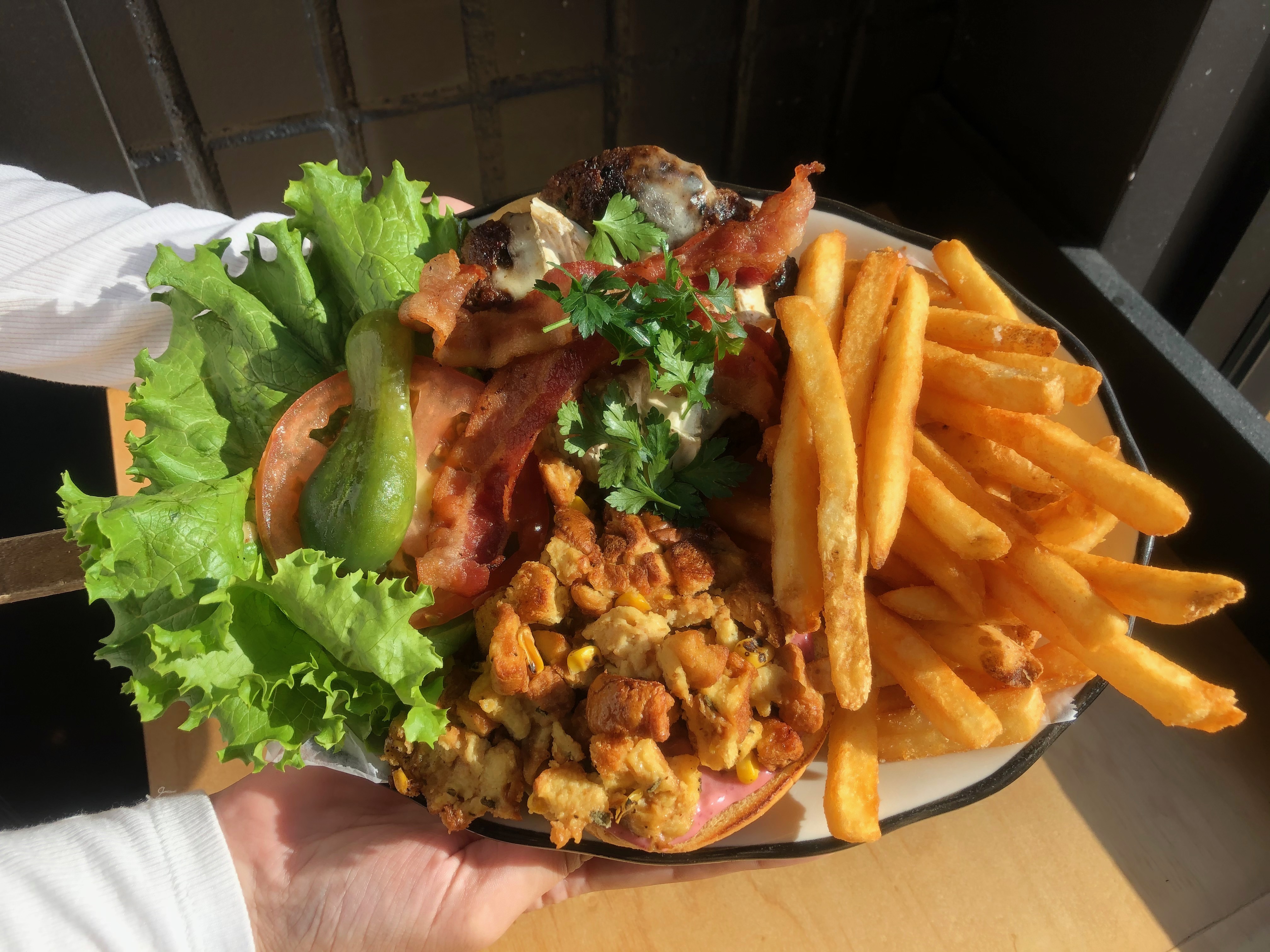 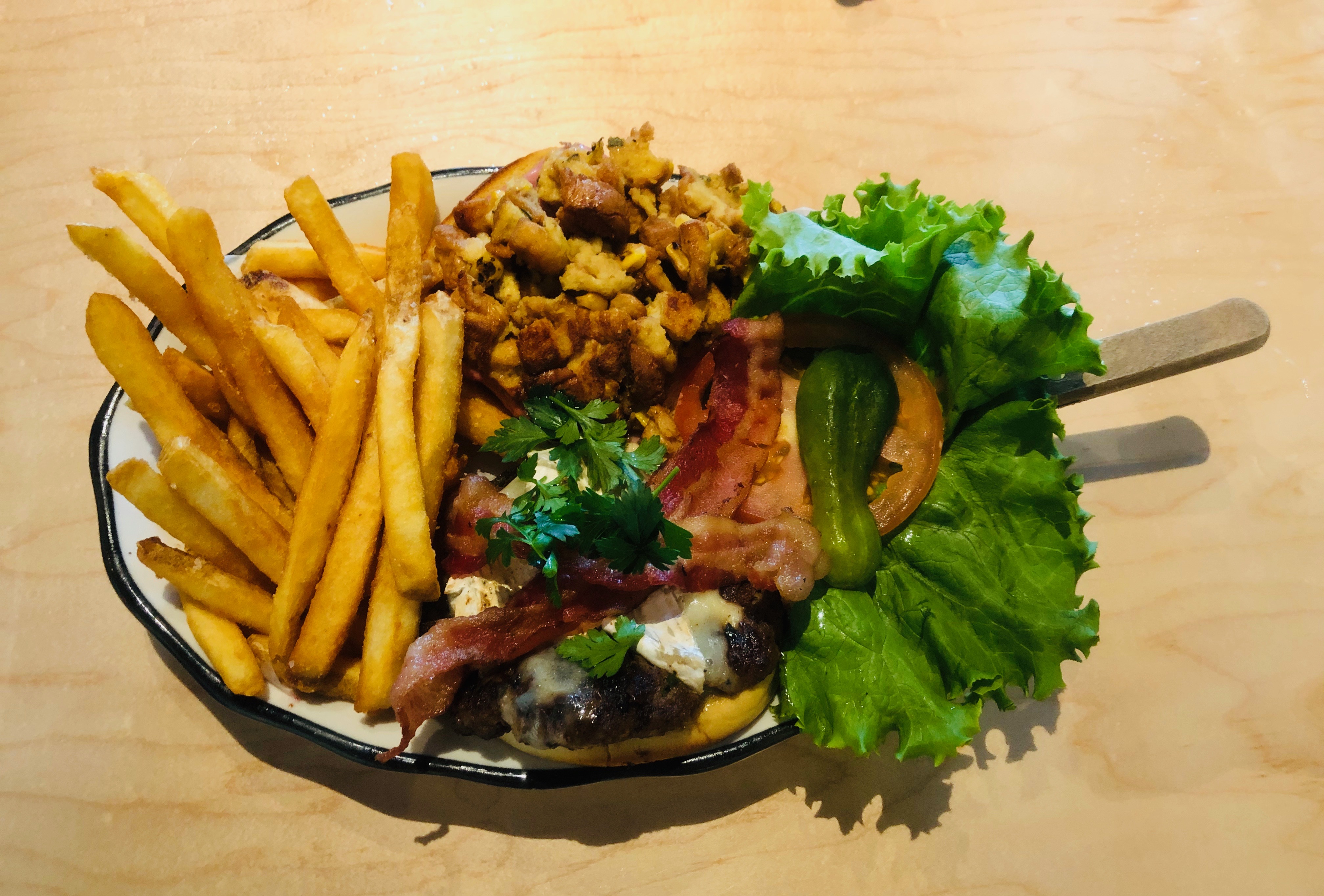 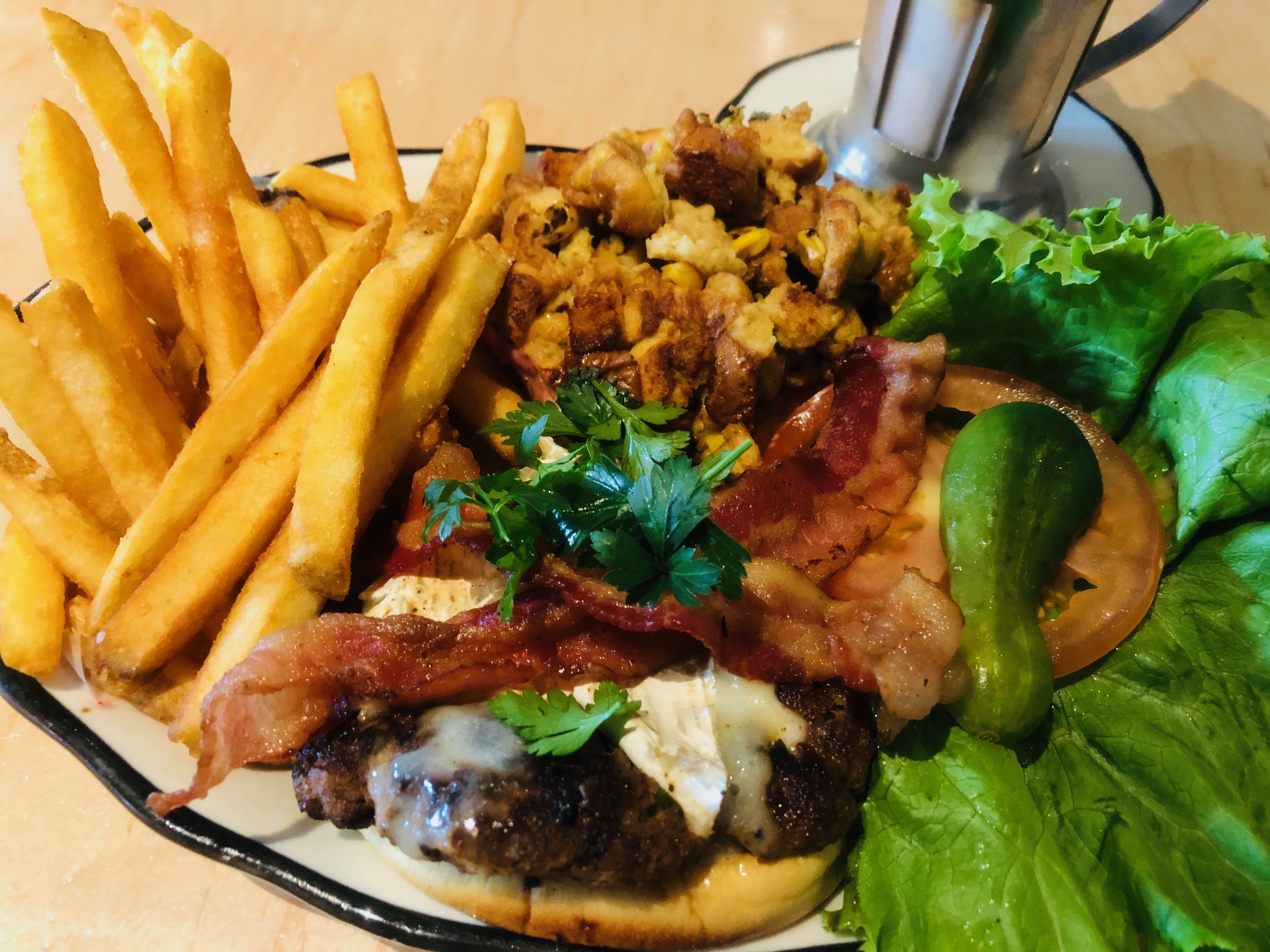 The burger looks daunting when it first arrives, but once you sort out which toppings you want, this is a fun twist on Thanksgiving. We opted for a side of fries and as always the fries are crispy, salty, and delicious. 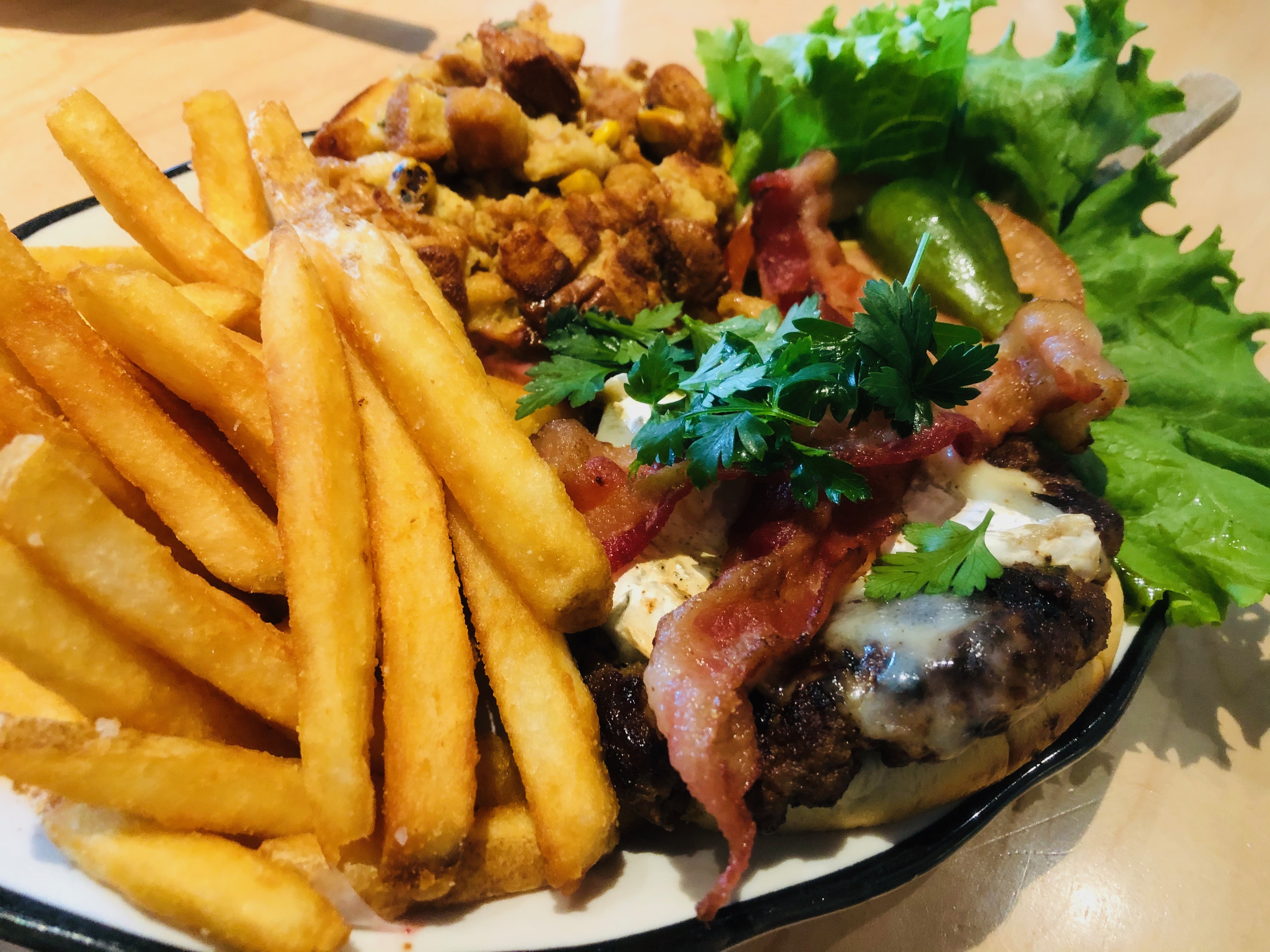 The bacon on top threw us off at first, but the smokiness was actually needed to cut the brie and sweetness of the cranberry/orange aioli. 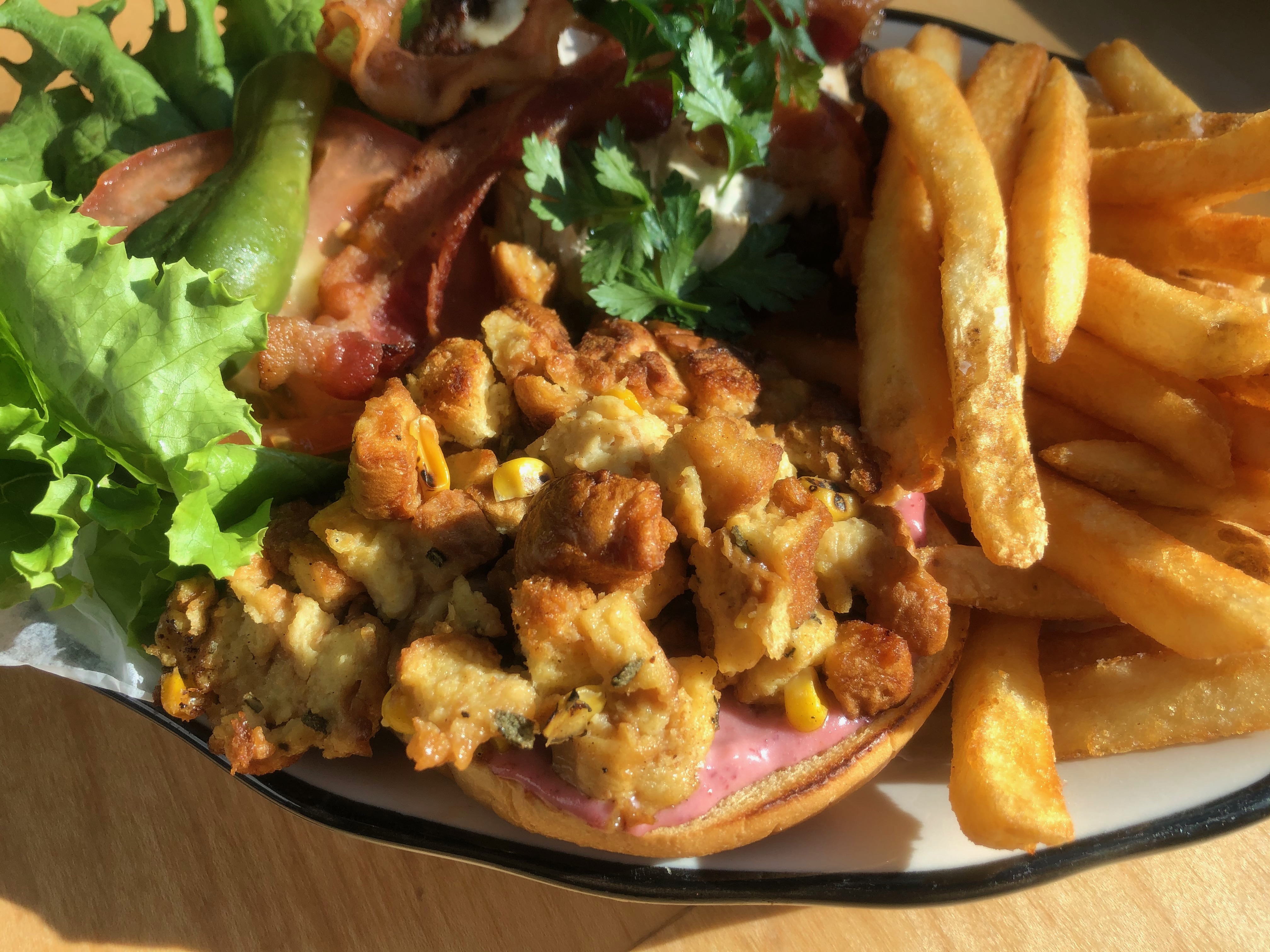 The color of the aioli was bright and added some sweetness and berry flavor that turkey often needs. The turkey patty was cooked perfectly and was still juicy. 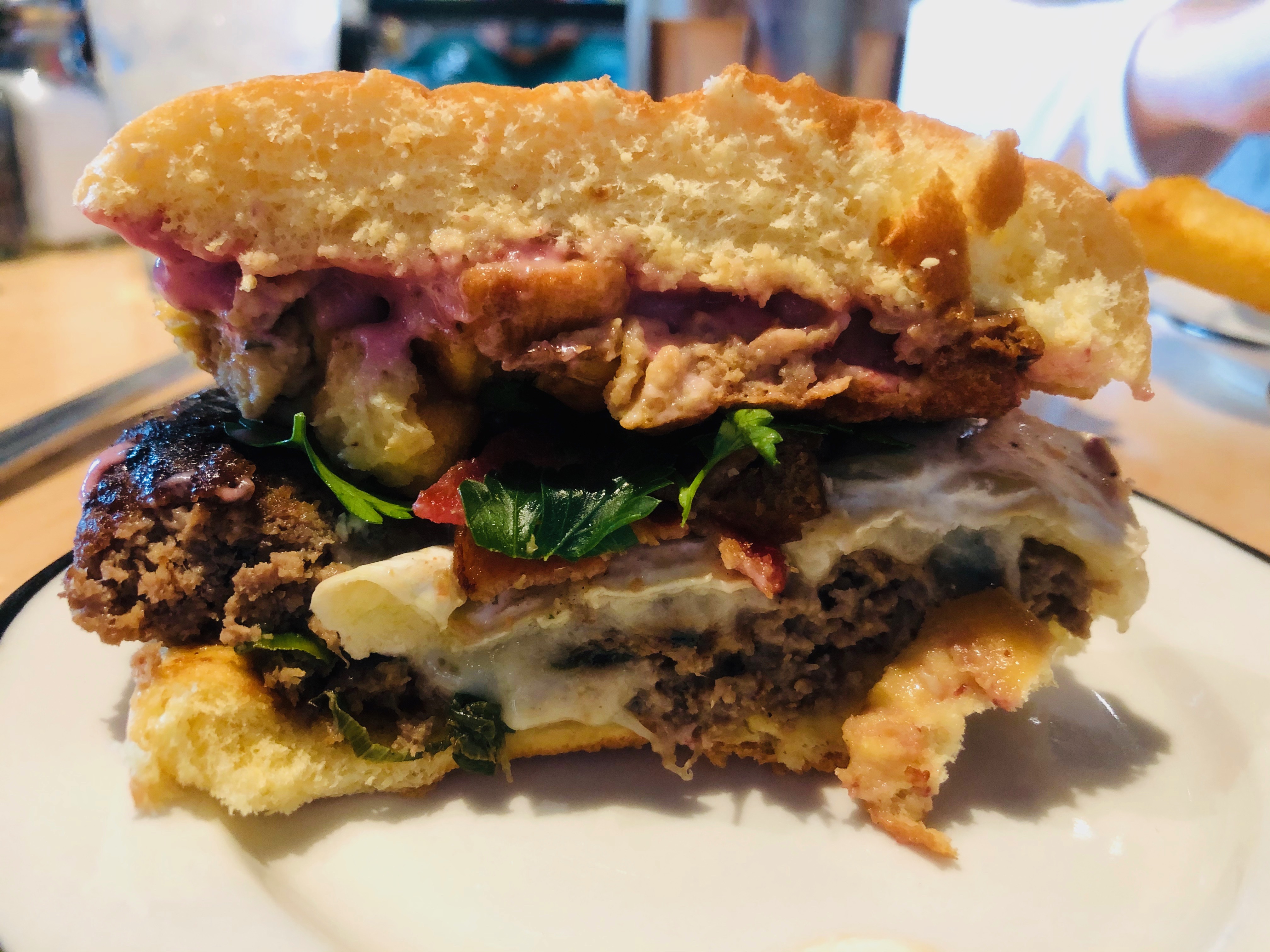 The sage and potato roll stuffing was bland on its own, but when topped with the melty brie cheese, it really helped blend the Thanksgiving turkey dinner-burger combo into one. A few of our bites were very brie-heavy, so we scrapped a bit of the brie off as we enjoyed the turkey burger and aioli taste better. A few of us almost felt like this had the taste of a melted egg to it with how packed with umami it was. 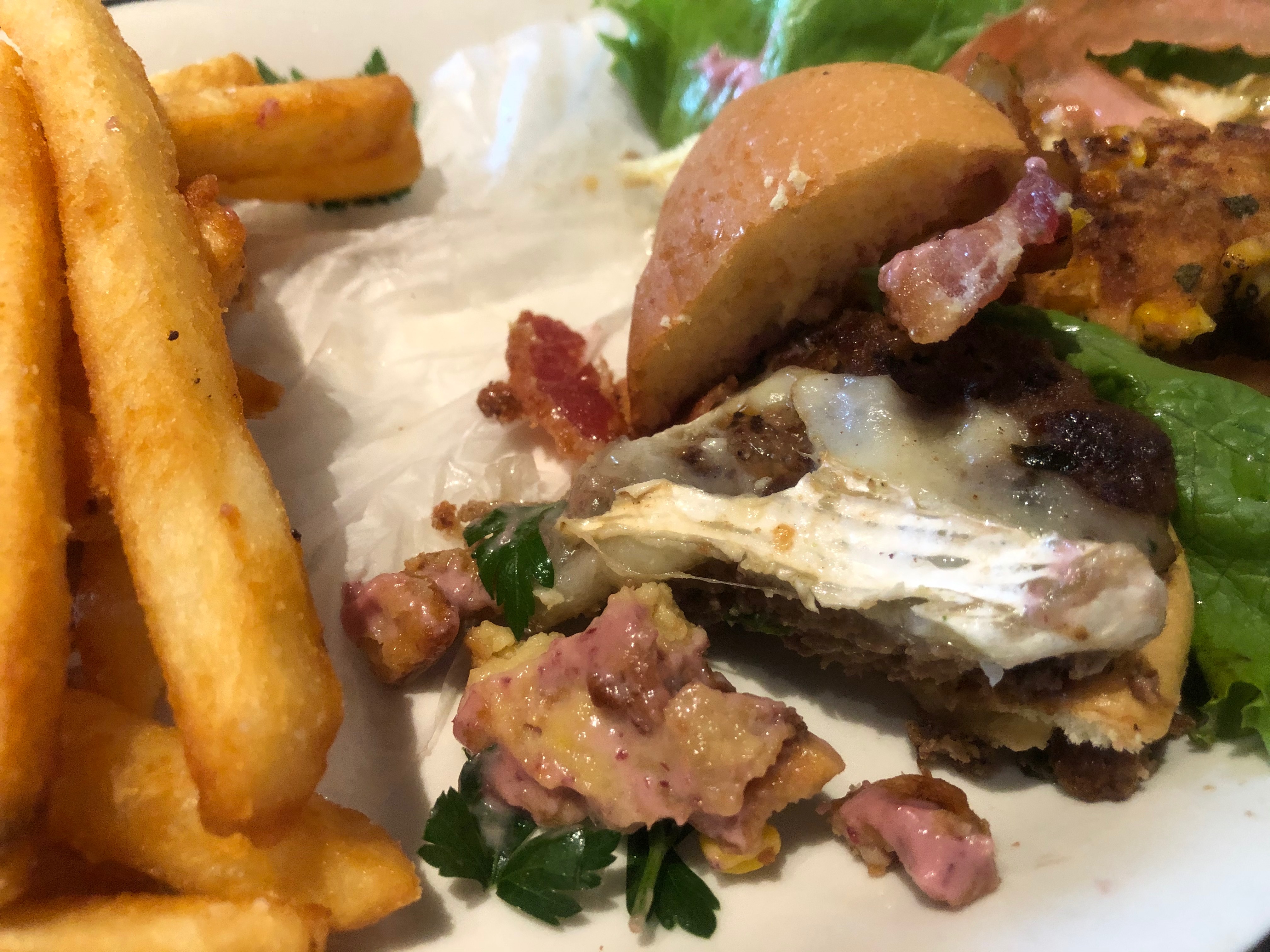 Overall, we found this burger super flavorful and all the flavors of brie, cranberry, smoky bacon, and turkey burger worked well together to create a fun hybrid on a Thanksgiving meal. If you are in the Downtown Disney District during Thanksgiving week and need a break from the crowds, be sure to give these limited time offerings a chance.

Some Performances of ‘Finding Nemo: The Big Blue… and Beyond!’ Canceled, Live 'Harmonious' Special f...June 15, 2022
Construction Walls Extended around Pirates of the Caribbean at Disneyland Park, Attraction Sign Wrap...April 18, 2022
Disney Pays $100,000 to Guest Bitten by Bedbugs at Disneyland HotelMay 3, 2022