Greetings from Disney Springs! It’s a beautiful day to explore our favorite place to shop and eat. Let’s see what’s going on! 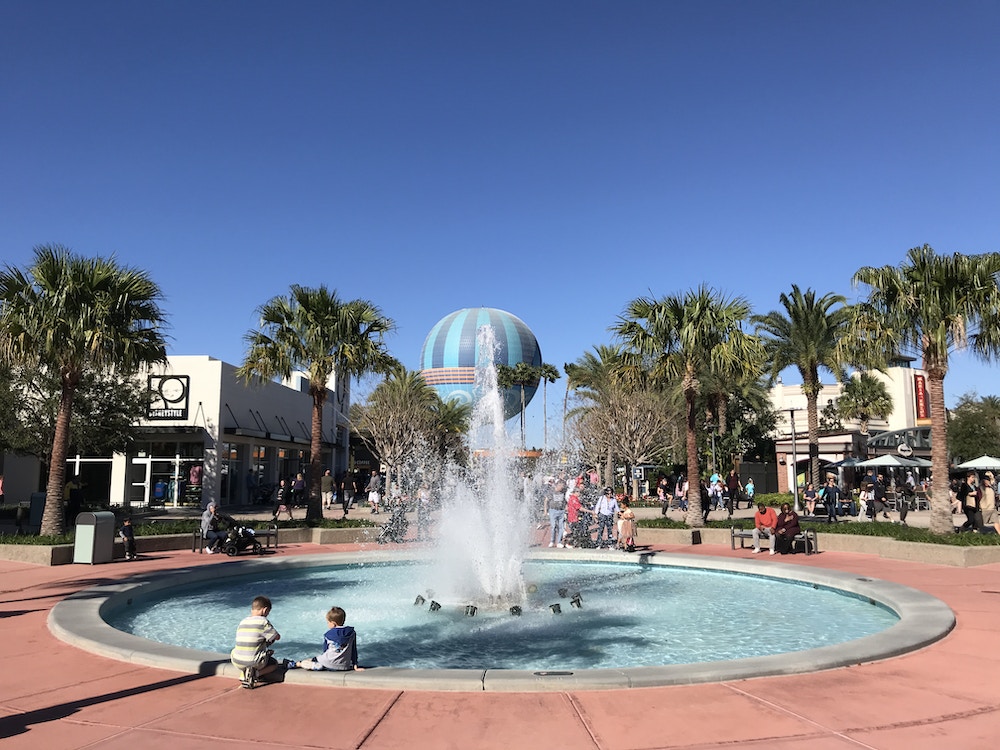 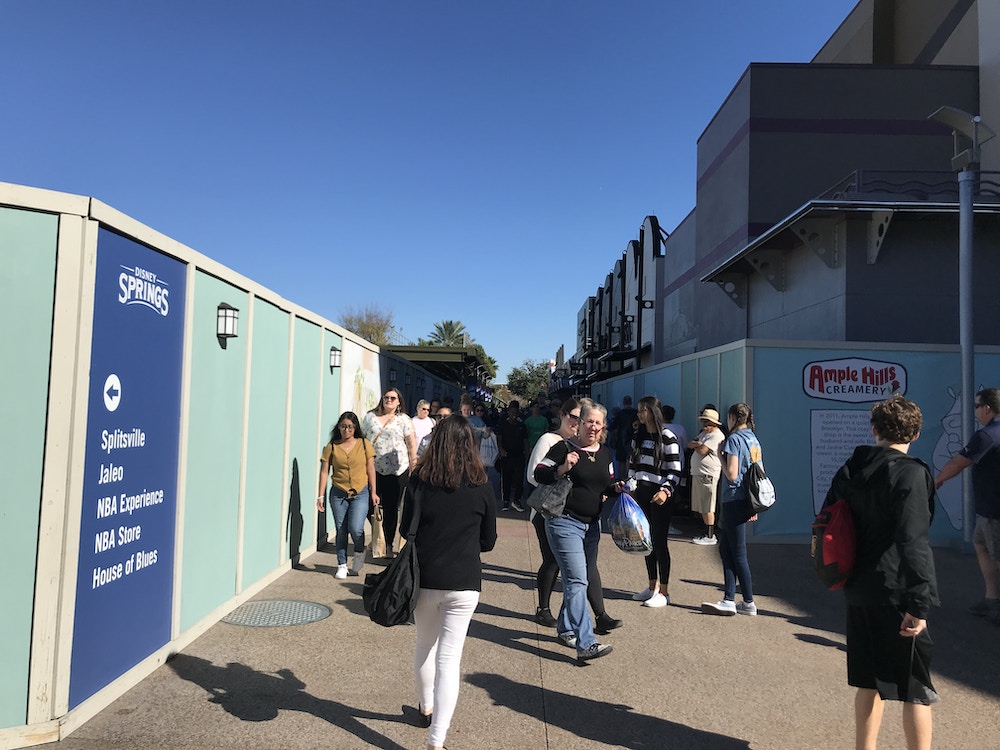 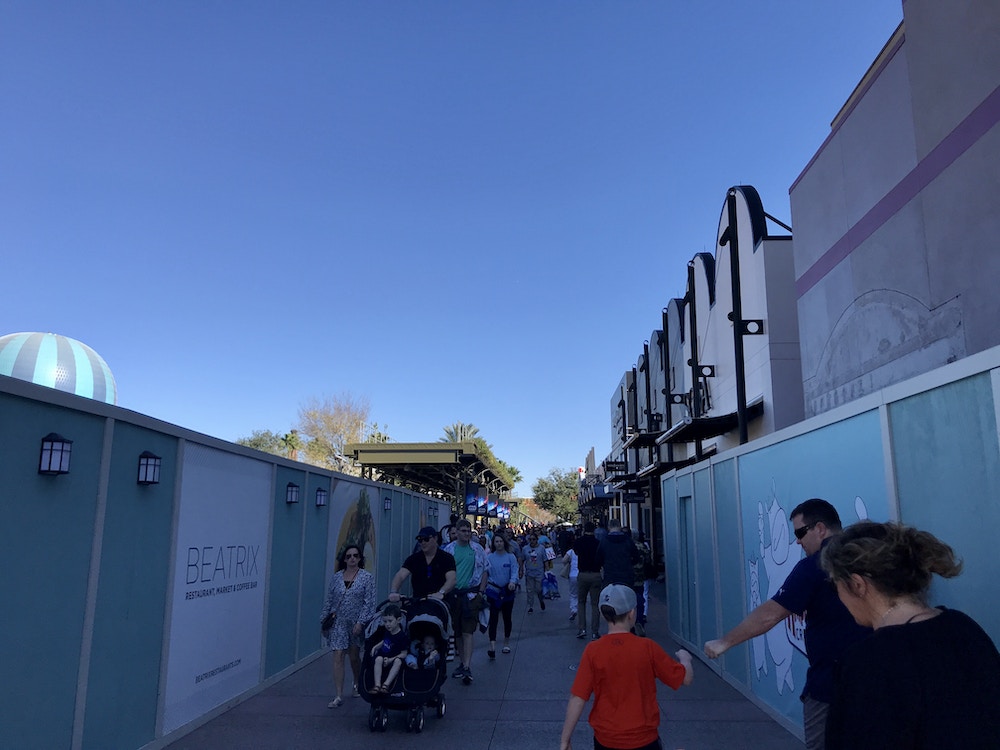 There’s SO MUCH construction happening on Disney Springs’ West Side. The walkway has been narrowed as construction walls now encompass sections of it. 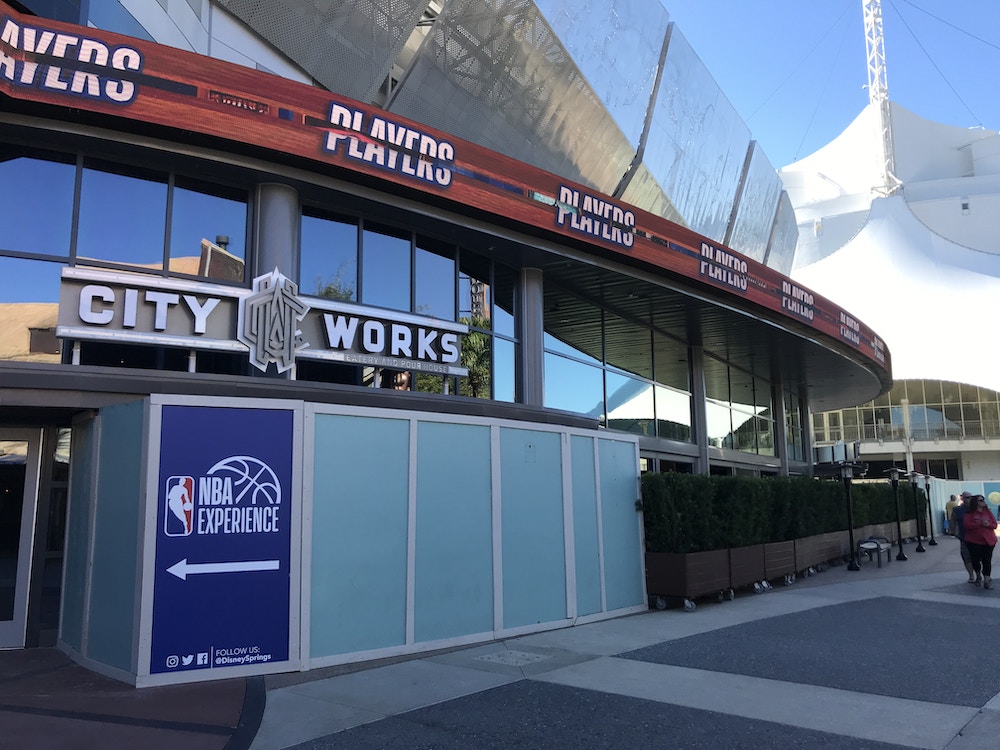 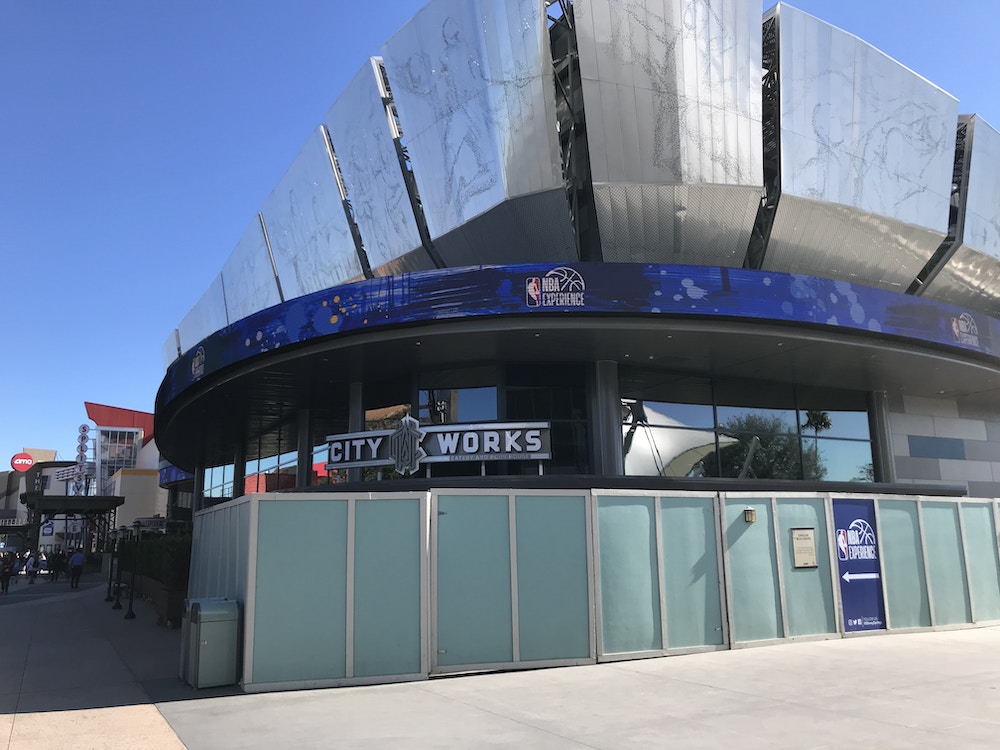 Today, there seemed to be an event going on inside, most likely media, even though the building was still surrounded by construction walls and hedges. 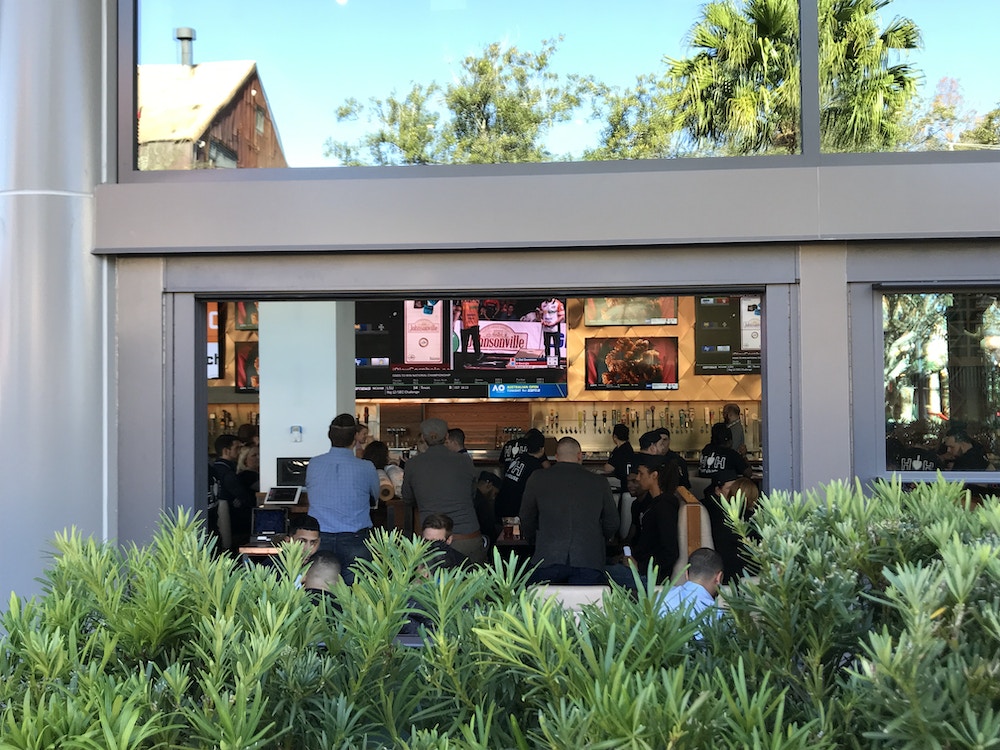 From what we could see and hear, there was a lot going on inside. We’ll keep an eye out for when this restaurant opens. 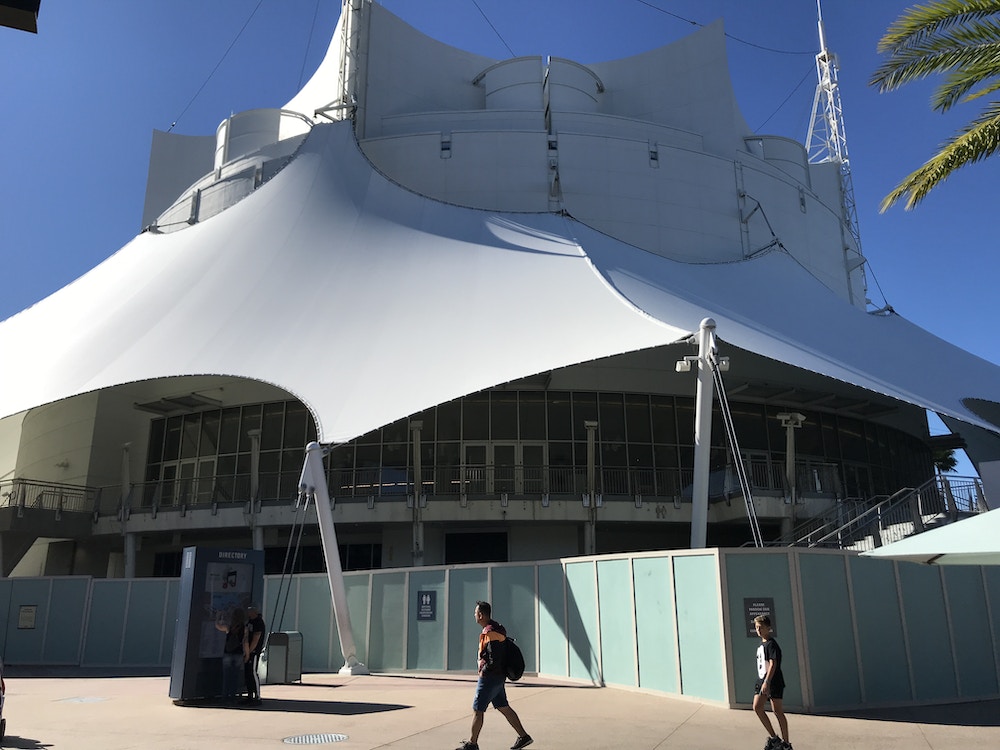 There’s no major changes on the outside of the Cirque du Soleil building. Construction walls still circle the building’s perimeter. 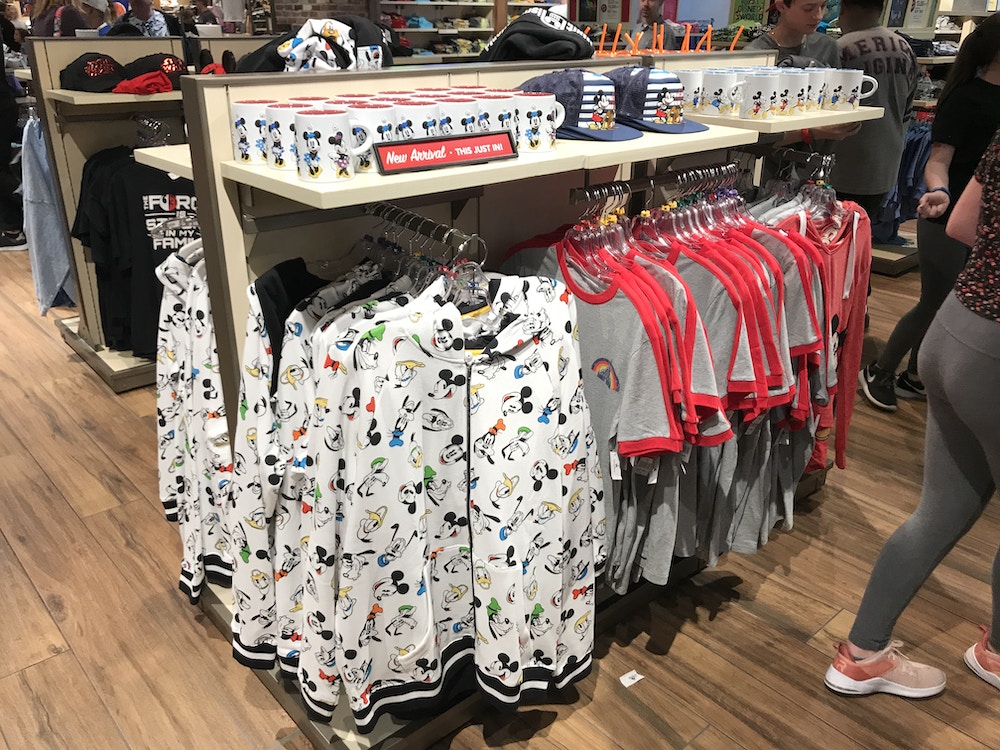 Oh, boy! A new merchandise collection! We had an inkling that a collection was coming, when earlier this week we spotted a handful of vintage-inspired Fab Five items. The collection includes sweatshirts, a t-shirt, sweatpants, mugs and a tumbler cup. We found all of these items at World of Disney. 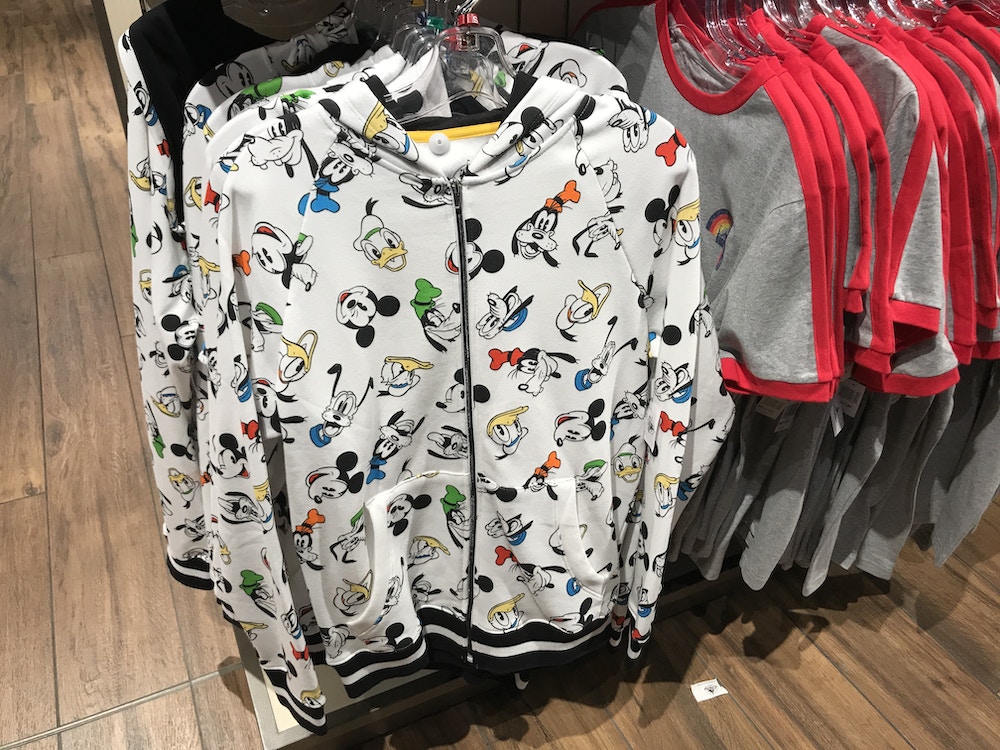 This white hoodie is covered with the Fab Five’s faces. The sleeves and bottom have a black and white striped band. It’s $54.99. 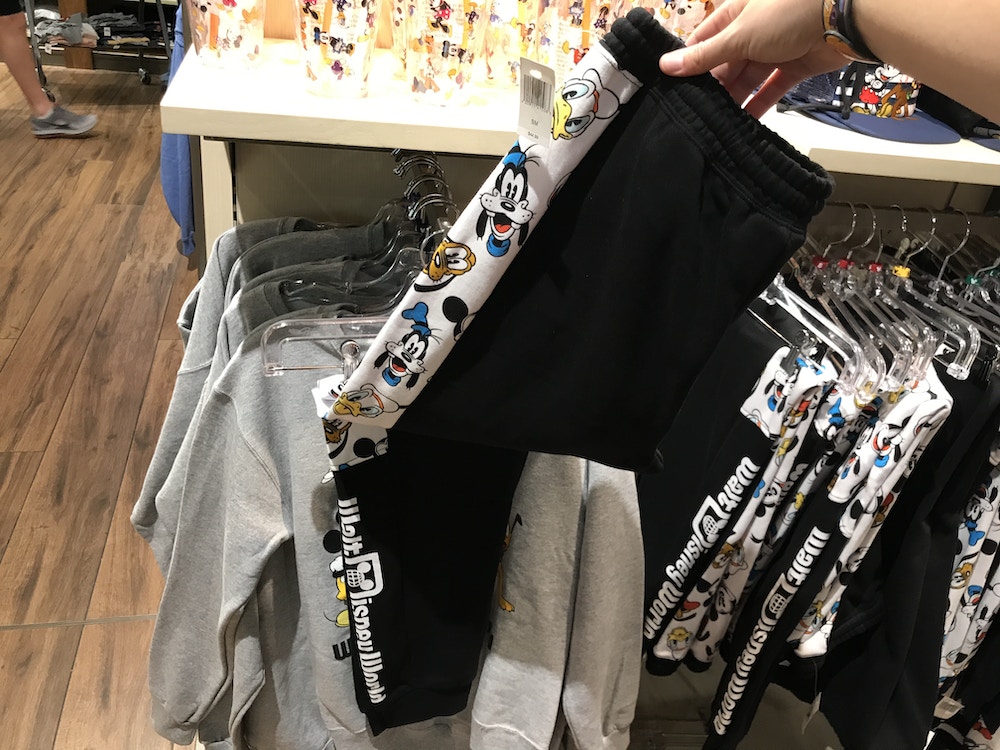 There’s matching black sweatpants that feature the same print down the side, along with the Walt Disney World logo. They’re $44.99. 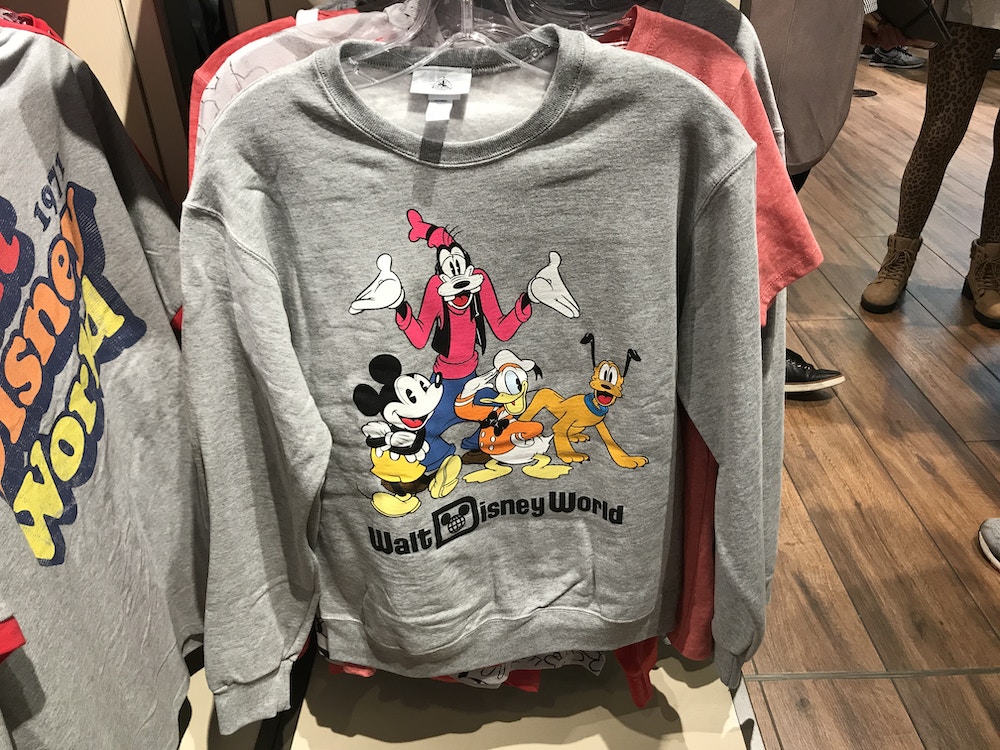 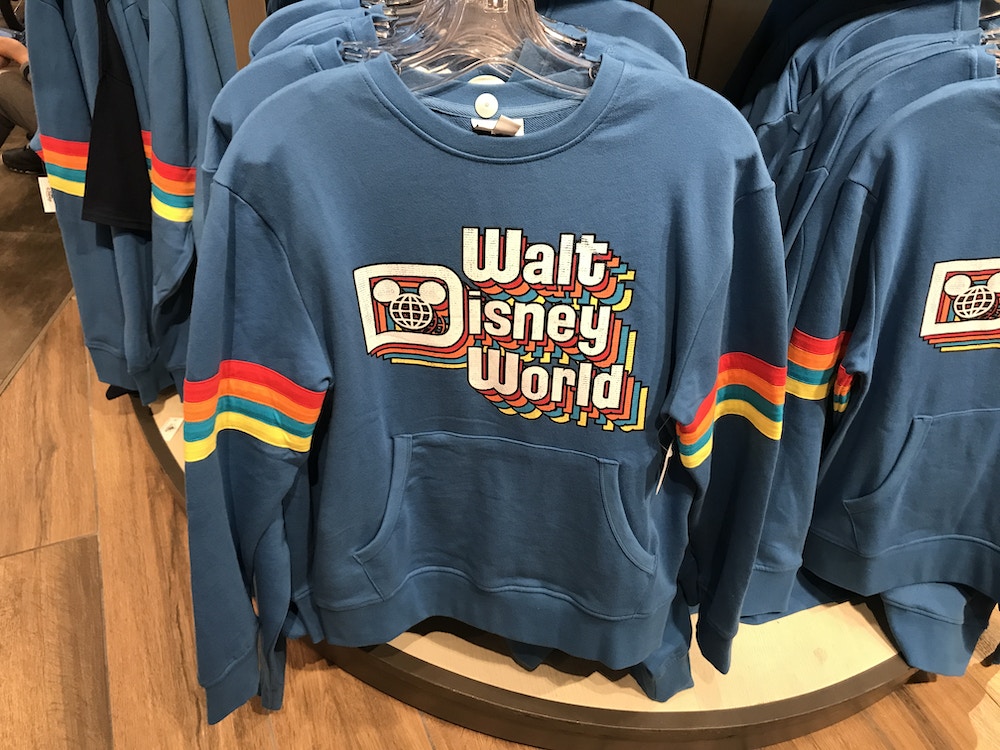 This retro-inspired blue sweatshirt has the vintage Walt Disney World logo on the front and bright horizontal multicolored stripes on the sleeves. It’s $54.99. 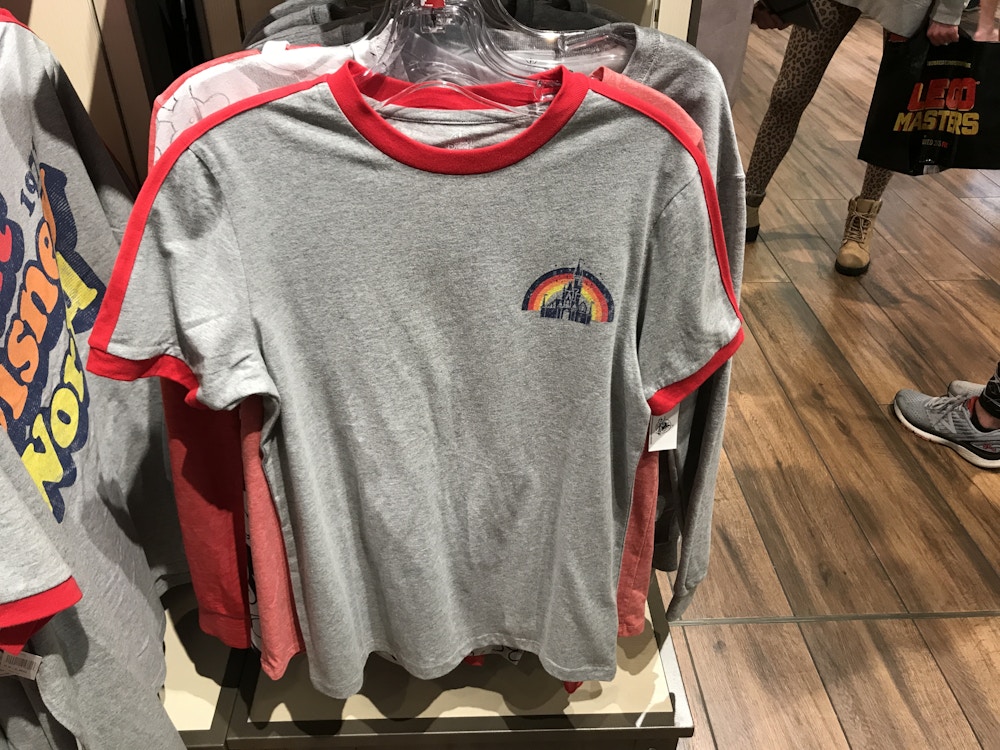 The gray and red t-shirt has a small Cinderella Castle with a rainbow in the background on the left side of the chest. 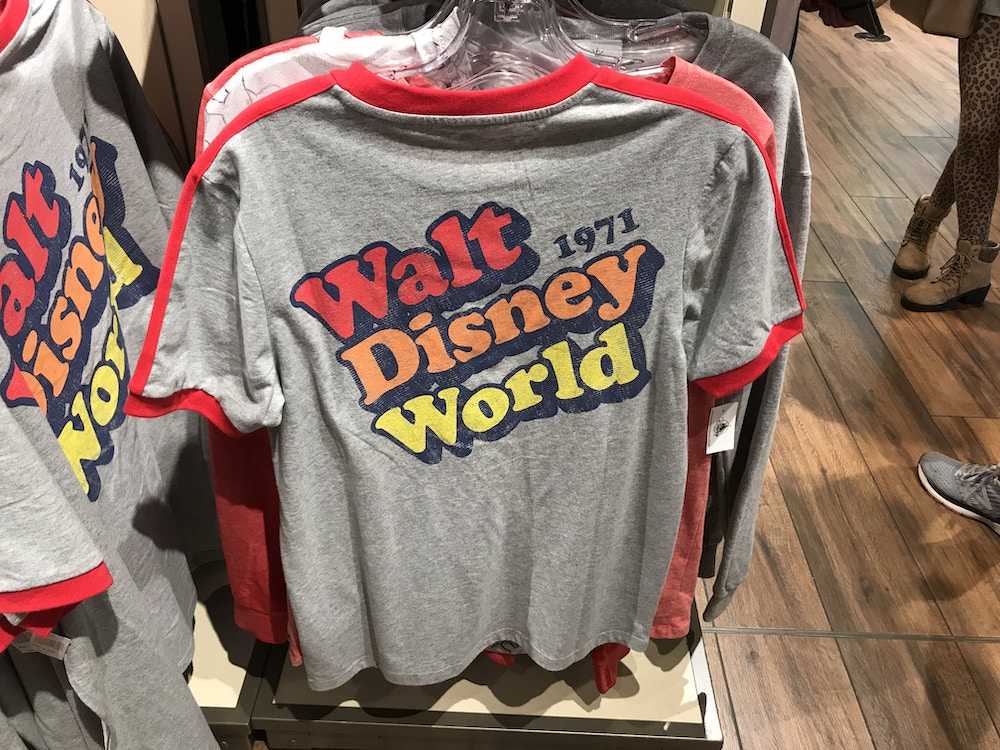 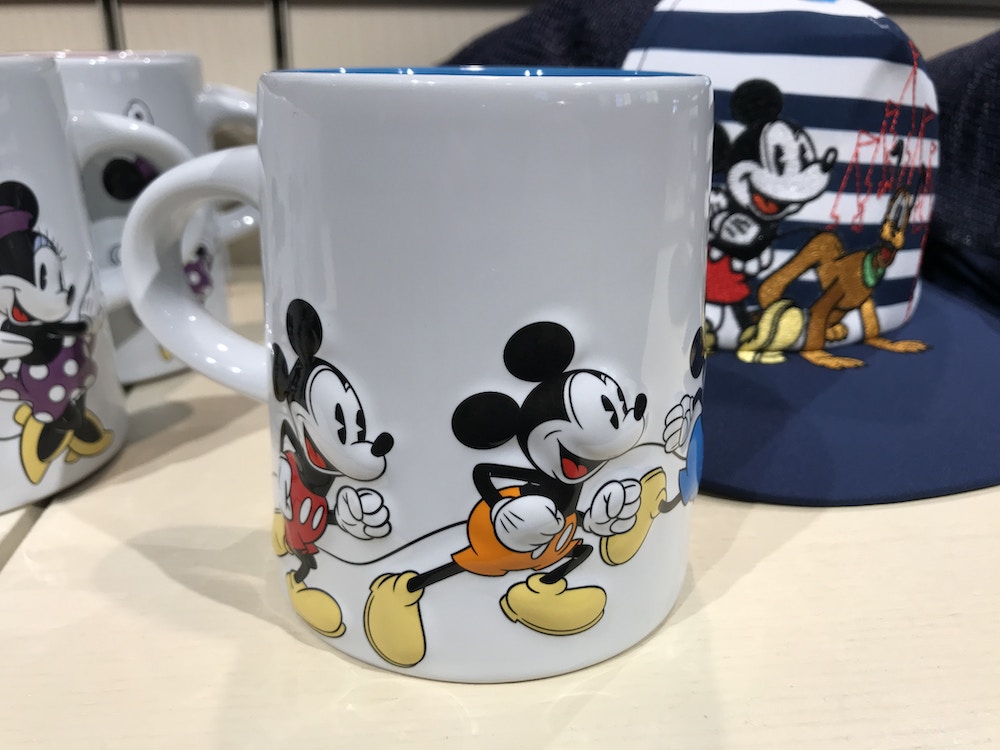 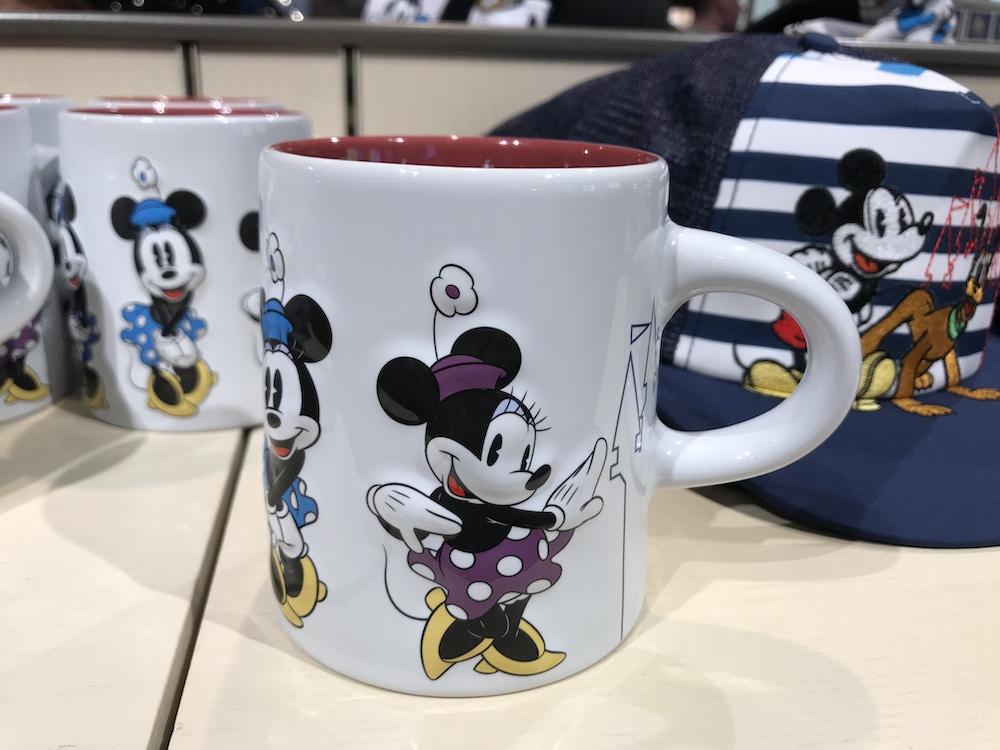 There’s matching white Mickey and Minnie mugs. They have multiple images of the character running around the base. Each image on the mug shows the character wearing clothing with a different shade of color. They’re $14.99 each. 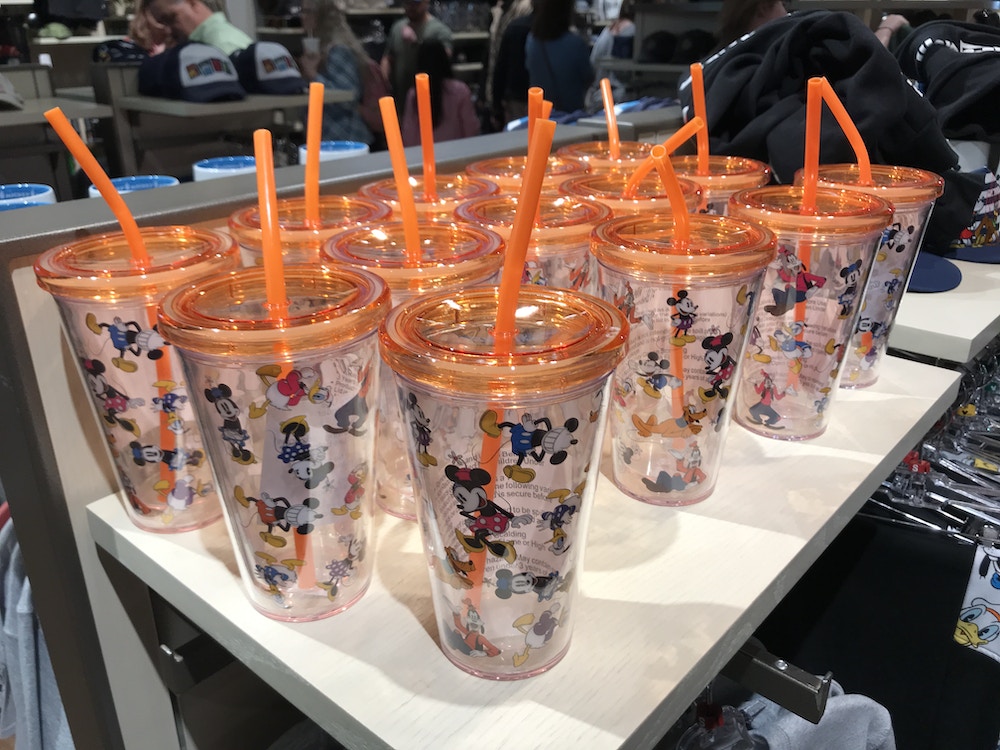 The orange tumblers are transparent and show the Fab Five with different expressions and poses. The cup is $19.99. 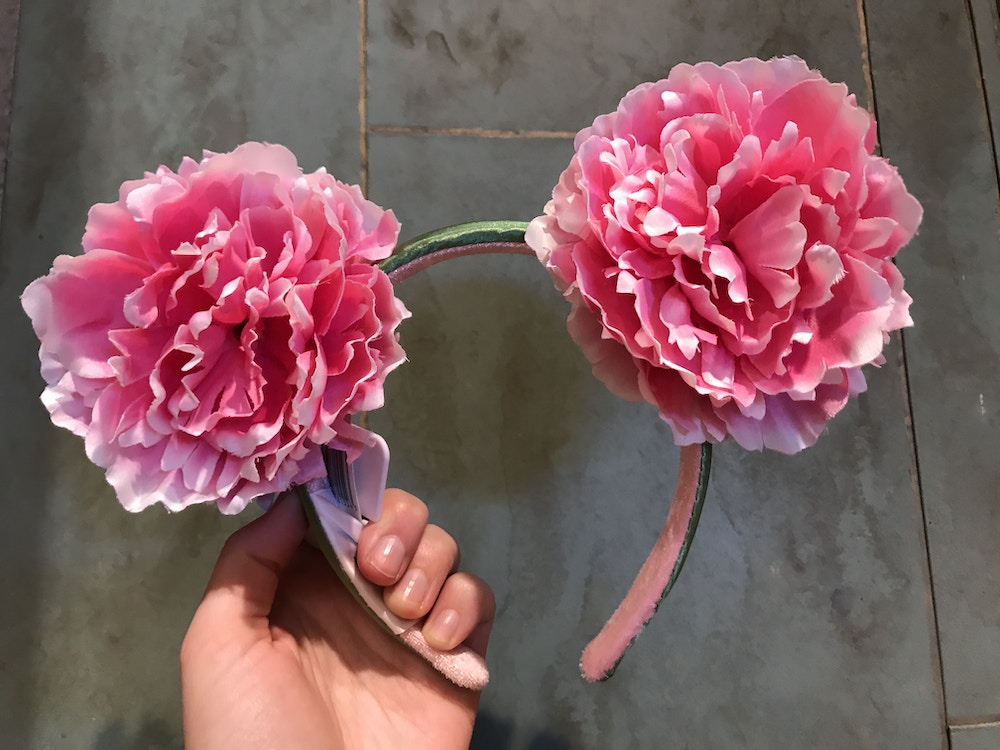 We’ve been anxiously awaiting the arrival of the peony ear headbands ever since we saw them pop up at Disneyland. Today, we found them in full bloom at World of Disney. These gorgeous ears would be a lovely addition to any spring time park outfit, especially for this year’s International Flower and Garden Festival at EPCOT. 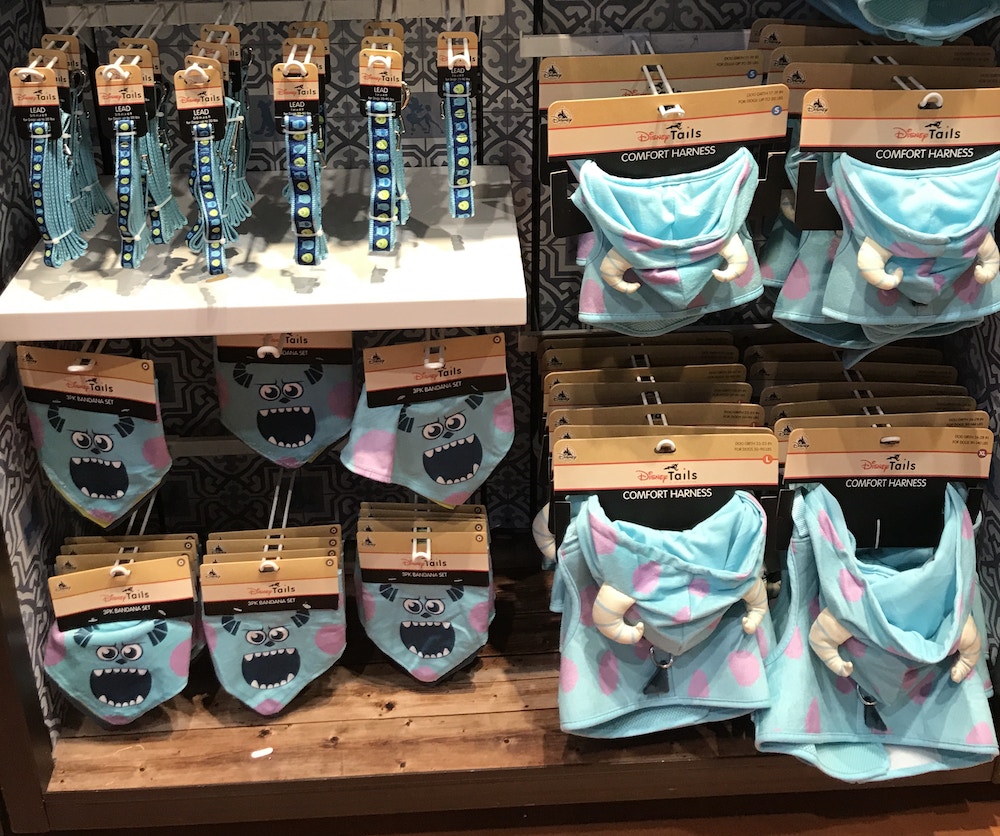 In case you missed it, there’s a new “Monsters Inc.” pet accessories collection at Marketplace Co-Op. We’re practicing so much self control. We just want to buy it all for our little pup! 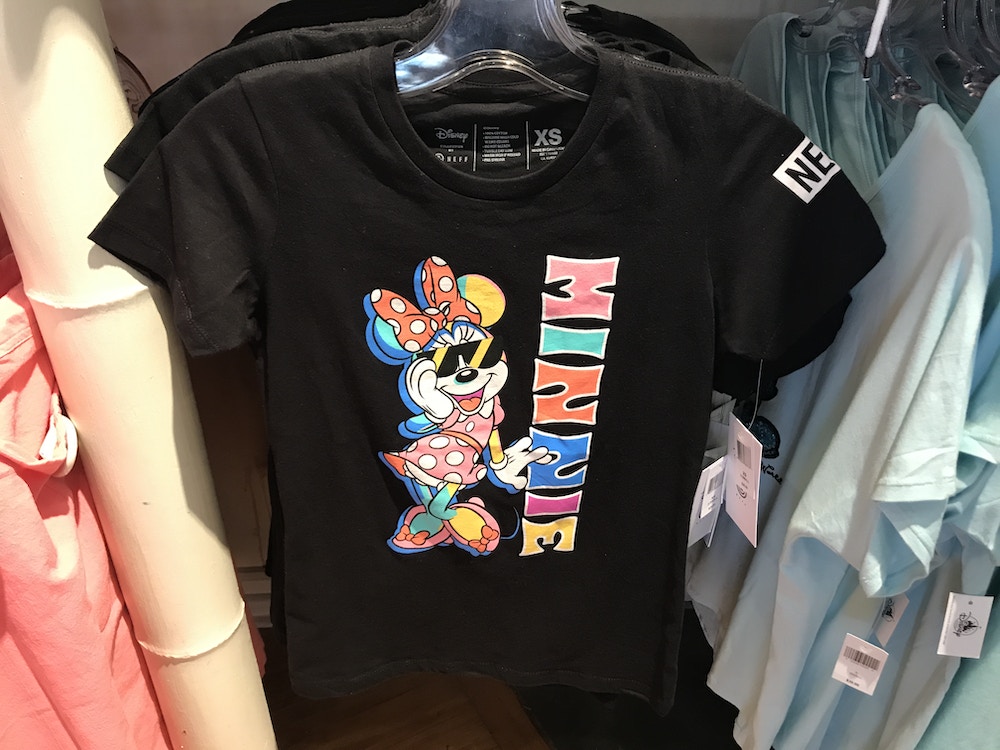 At Tren-D, we spotted another new shirt in the new Neff x Disney Minnie collection. This black t-shirt features a sassy Minnie posing in her sunglasses. Beside her is her name in colorful block letters. This shirt retails for $28. 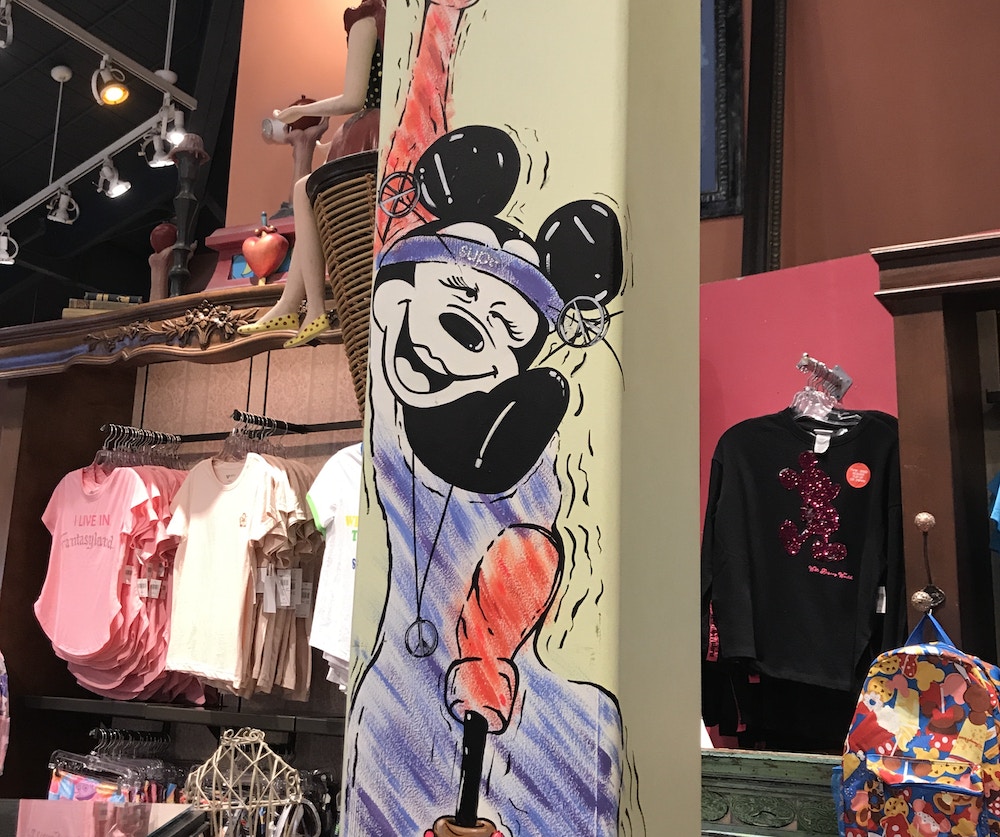 So long, for now! We’re off to get wine slushies from Amorette’s Patisserie, so we can feel as good as Minnie does. Keep checking WDWNT for all of the latest Disney Parks news!