shopDisney UK offered up a sneak peek at the merchandise being released in February as part of Minnie Mouse: The Main Attraction. As you may remember, January’s line releases January 18th and features items inspired by Space Mountain. 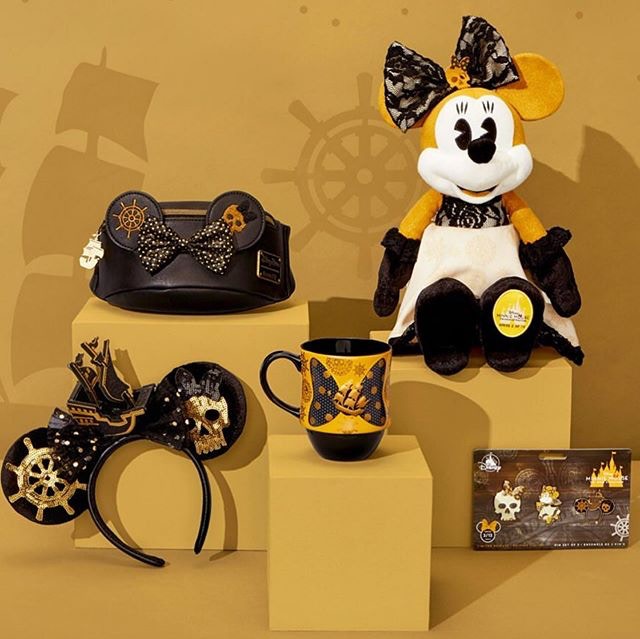 Each item has a dark and spooky color tone consistent with ‘Pirates of the Caribbean’ at Disney Parks. The extravagant ear headband features a pirate ship placed between the two ears which features a skull and a ship wheel.

There’s is a mug featuring a gold and black color scheme with a pirate ship placed in the middle of Minnie’s bow. The Loungefly fanny pack offers a unique bow and ear design that looks like the ear headband that offers the same design on the ears.

Minnie Mouse gets a plush that looks ominous with the gold, white, and black colors combined with the spooky bow and torso design. The three pins, which combine well with the previously announced pin collectors book, feature spooky Minnie inspired designs.

Each series will release on the 18th of each month and will be themed to a Disney Park attraction. All items will be available online and in select Disney Stores.

Disney previously stated that the collection would be available on the third Saturday of each month, so stay tuned to WDWNT for release dates on the February collection.

Next
PHOTOS, VIDEO: Every New Piece of Space Mountain and Carousel of Progress 45th Anniversary Merchandise (with Prices) in Tomorrowland at the Magic Kingdom