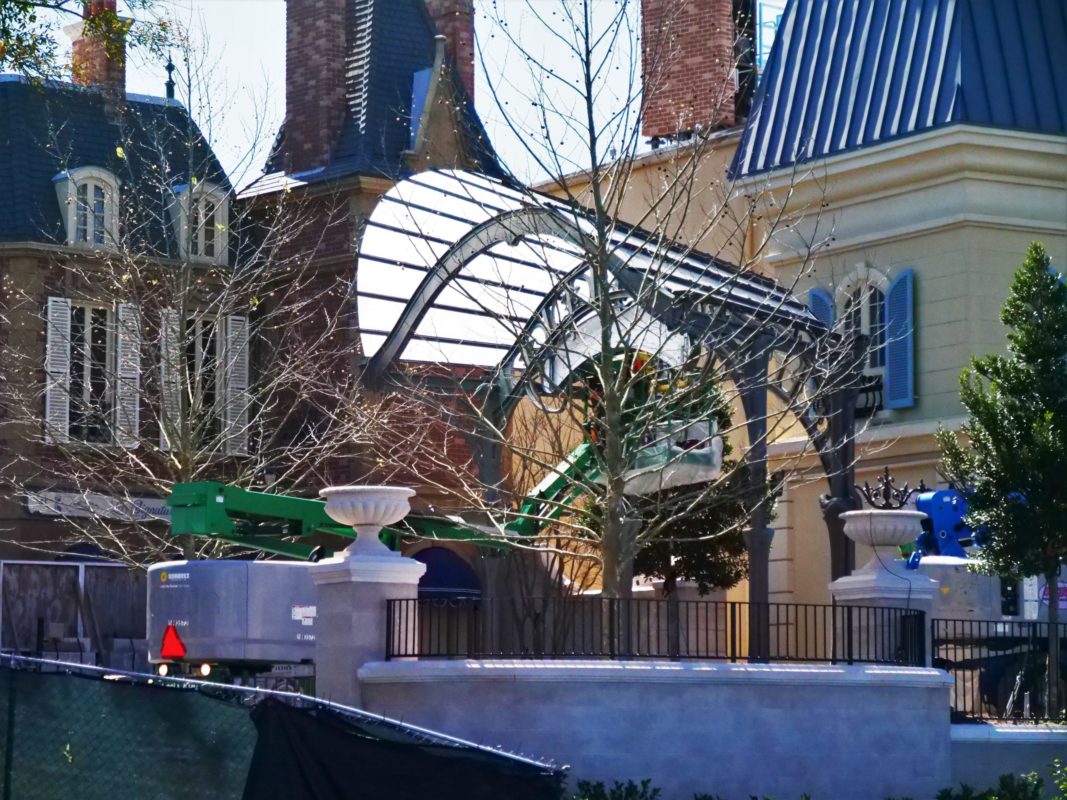 With the opening of Remy’s Ratatouille Adventure fast approaching, the amount of construction and detail work on the expansion of the France Pavilion within EPCOT’s World Showcase continues at a brisk pace. As the summer opening gets nearer, we are seeing this area enter its final stages of exterior theming work with small details added on a daily basis. Let’s take a look at some of the most recent changes to the expansion. 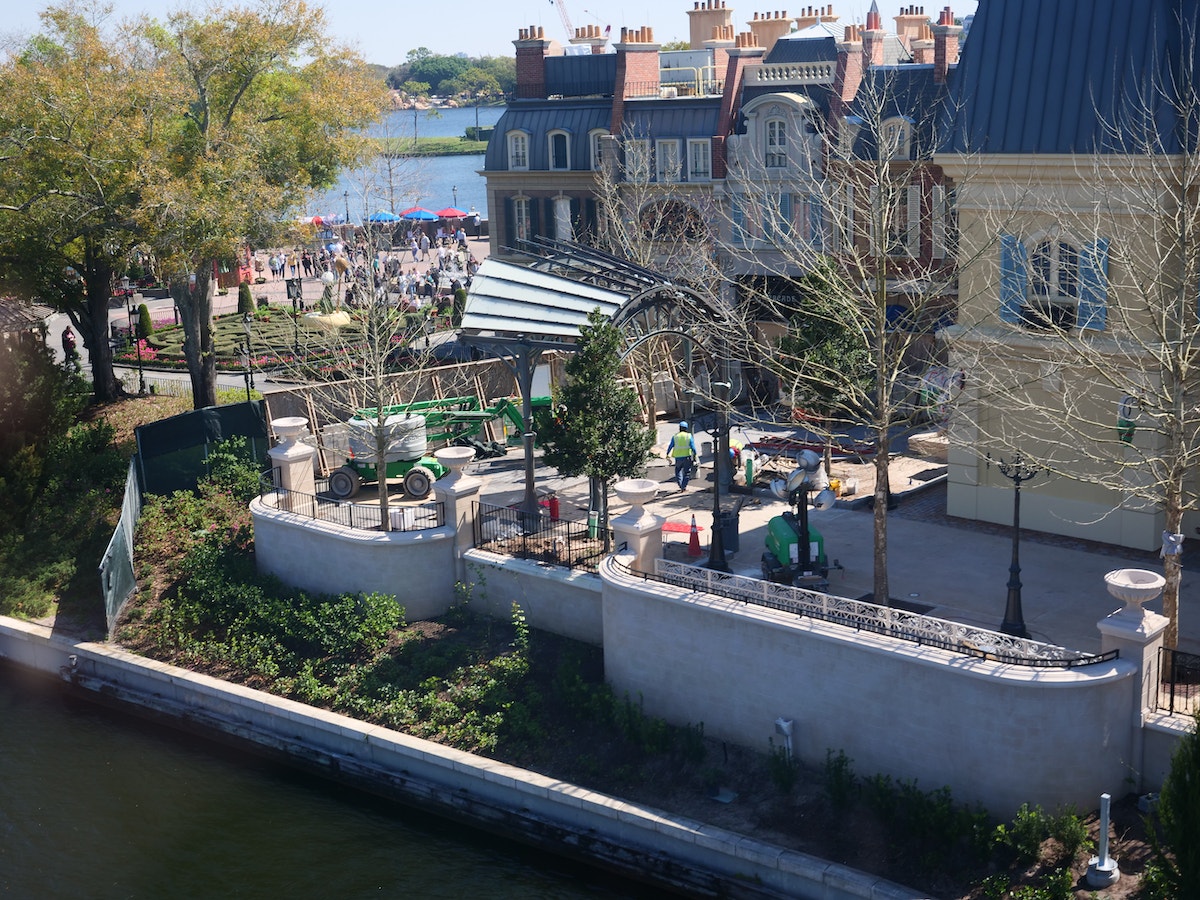 One of the most visible changes recently has been the addition of this beautiful, metro-style archway at the entrance to this offshoot of the existing France Pavilion. 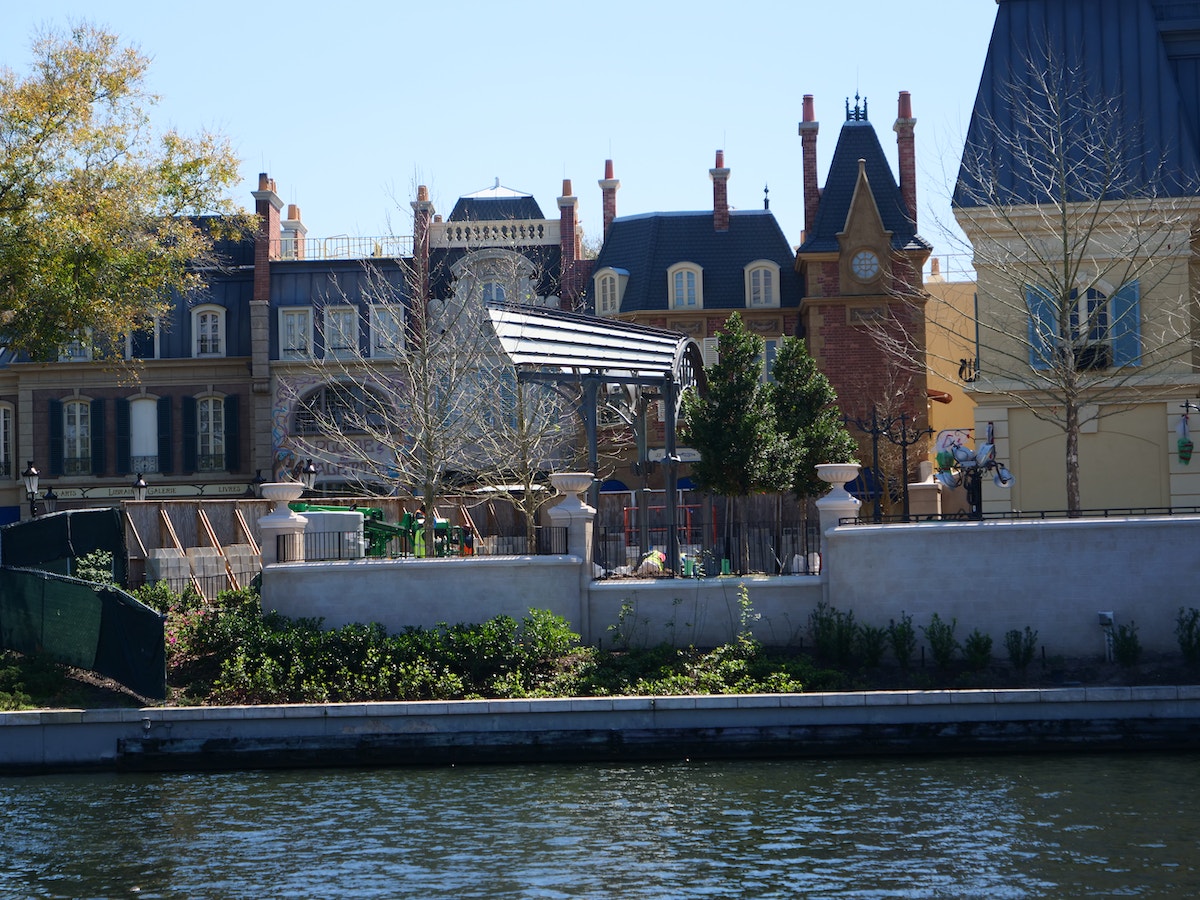 In the last couple of days, these translucent panels began to appear on the top of the structure. 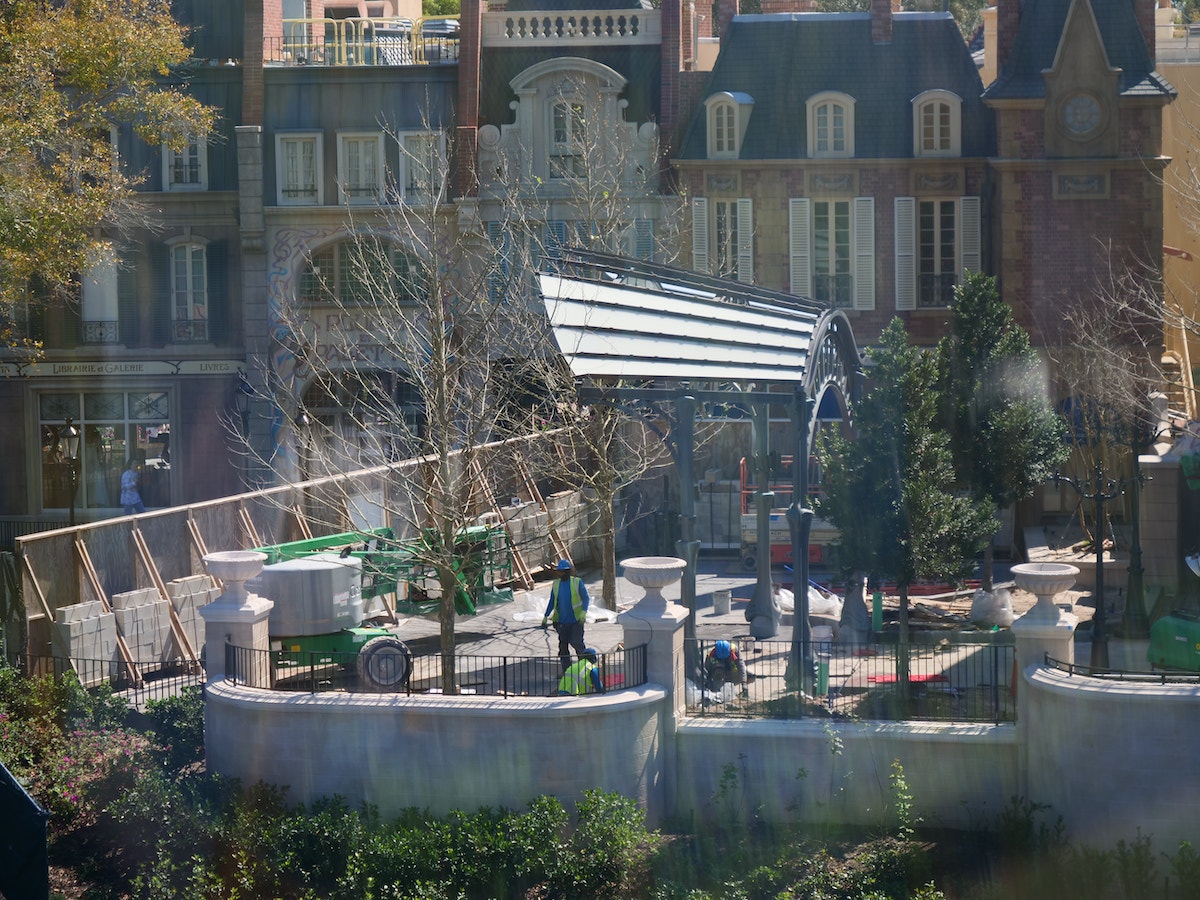 A handful of these translucent panels were originally added. 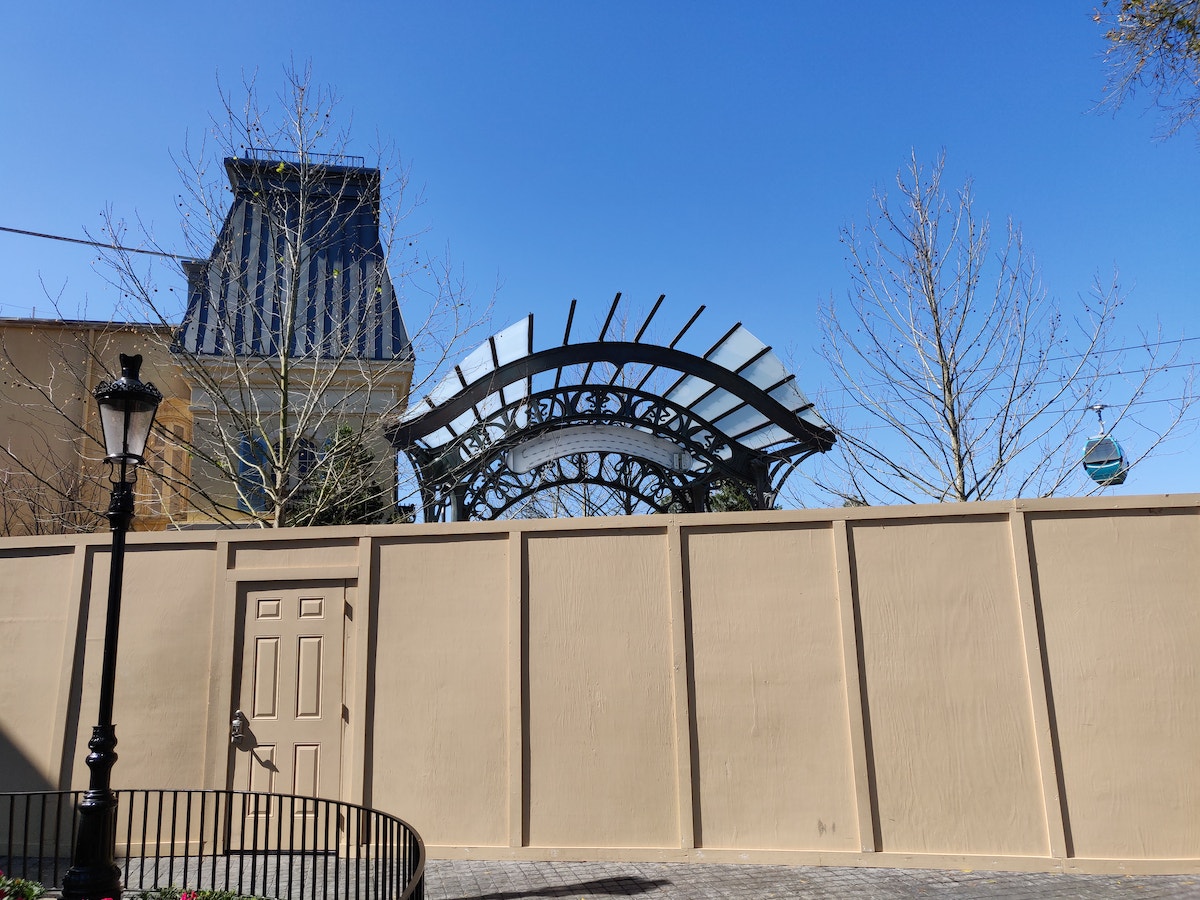 A new sign housing was also installed in recent days. Inside of it, we can see LED lighting which will illuminate the sign once it’s added. 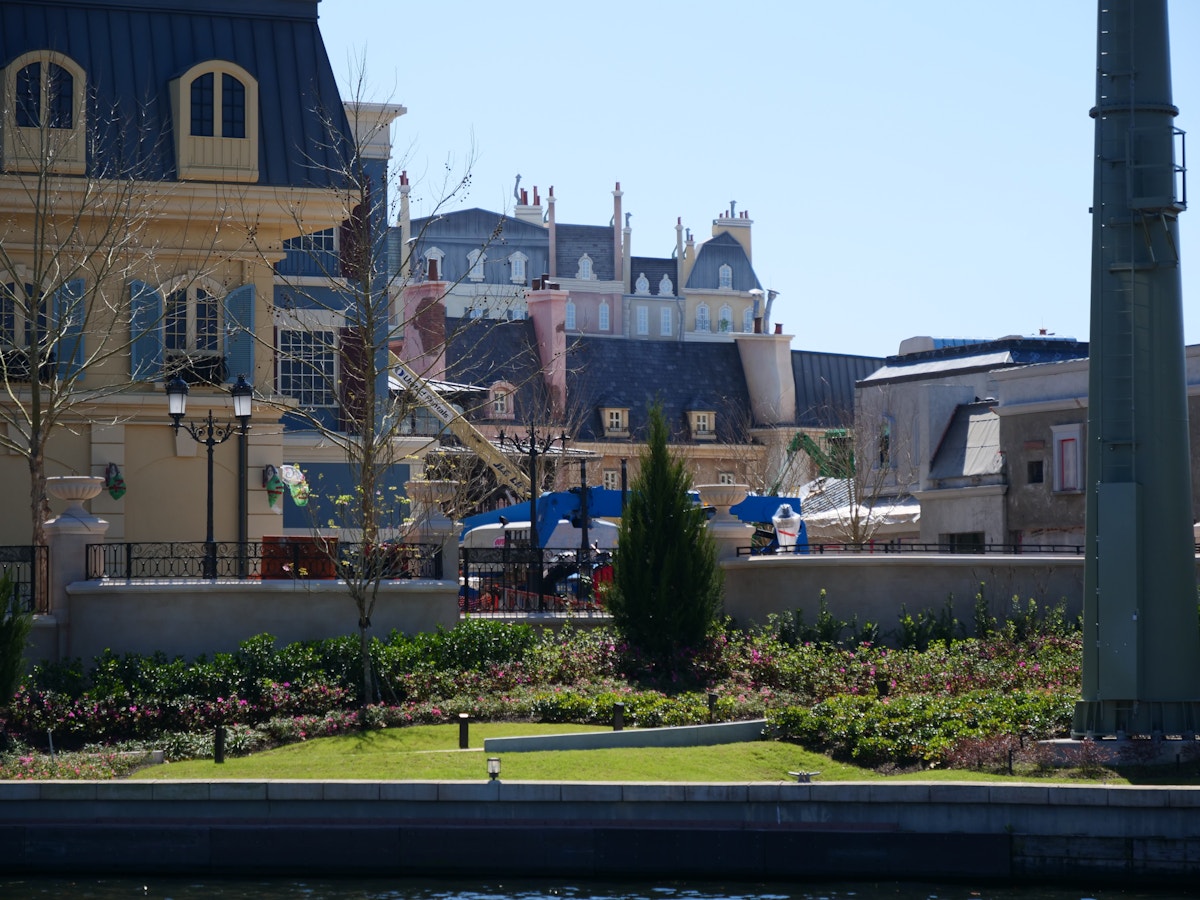 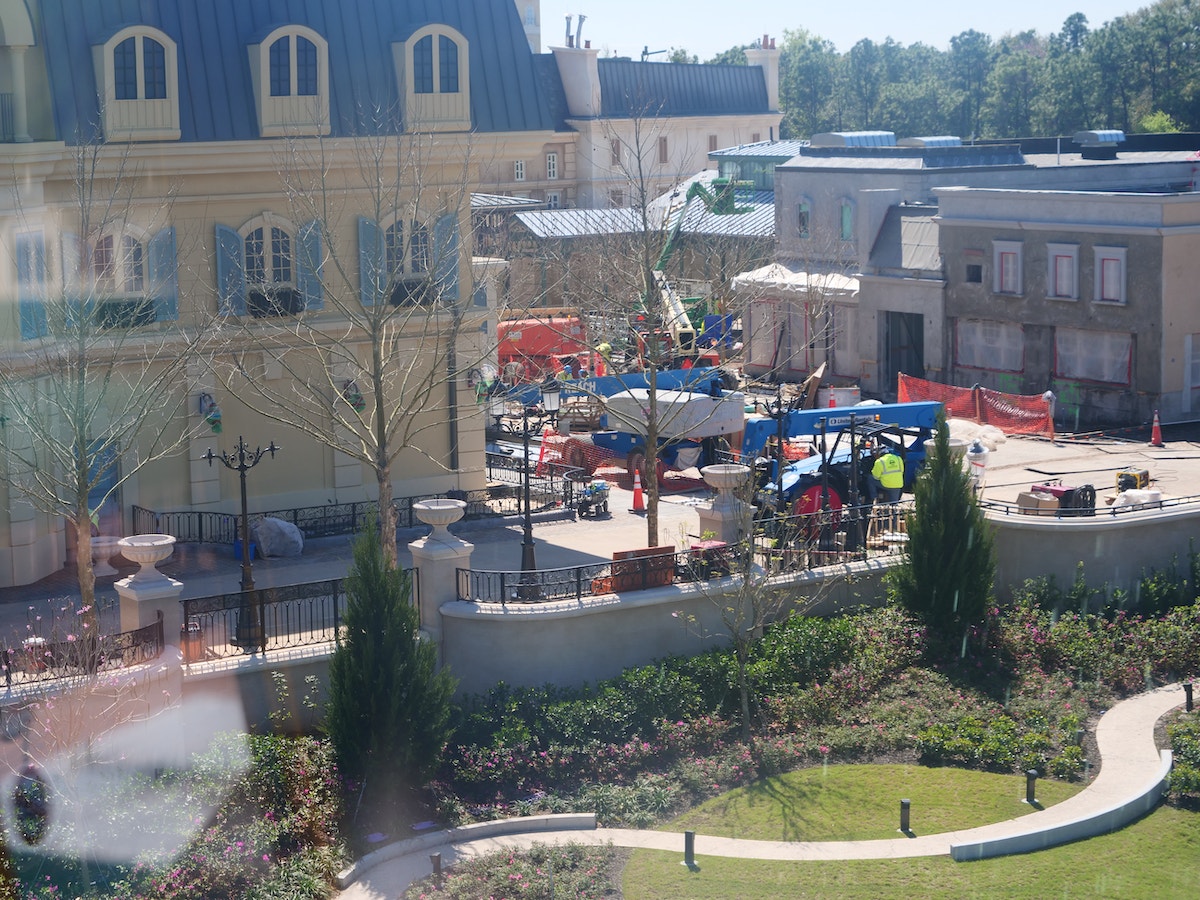 Down the path from the new archway, the courtyard area has no shortage of construction vehicles and workers on site. 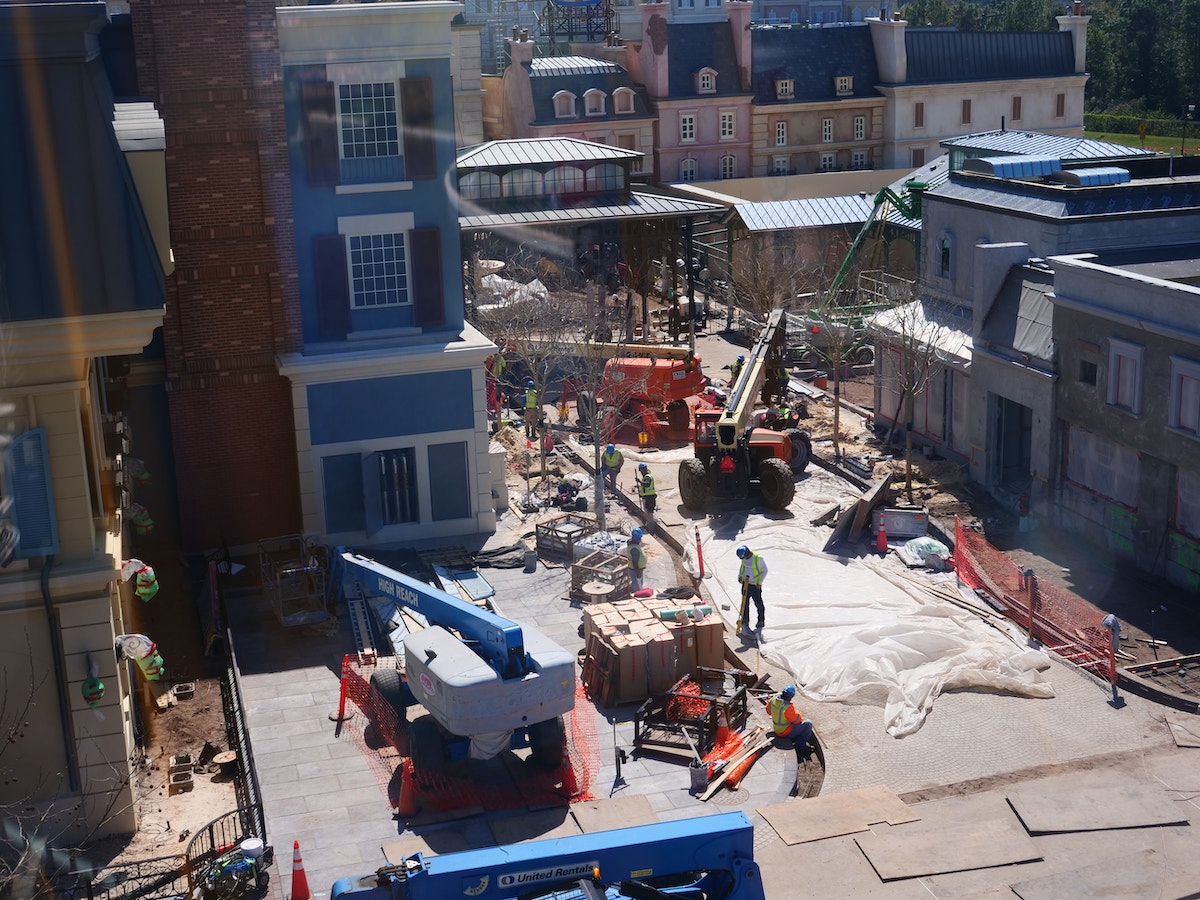 In this photo, it looks like a lot of effort is being put into the sidewalks on either side of the walkway which will lead guests to Gusteau’s, the restaurant setting for Remy’s Ratatouille Adventure. 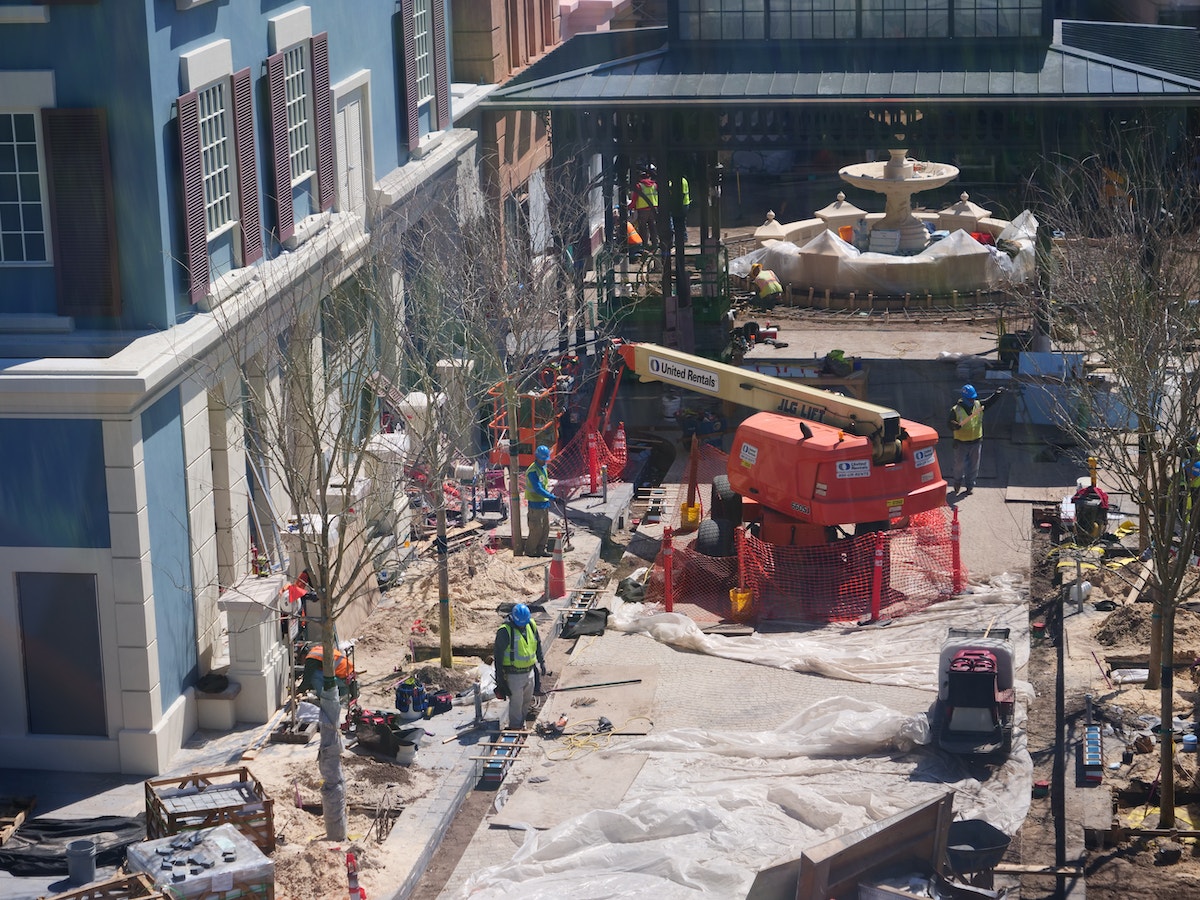 It also appears that small trenches are being worked on for the area’s drainage. 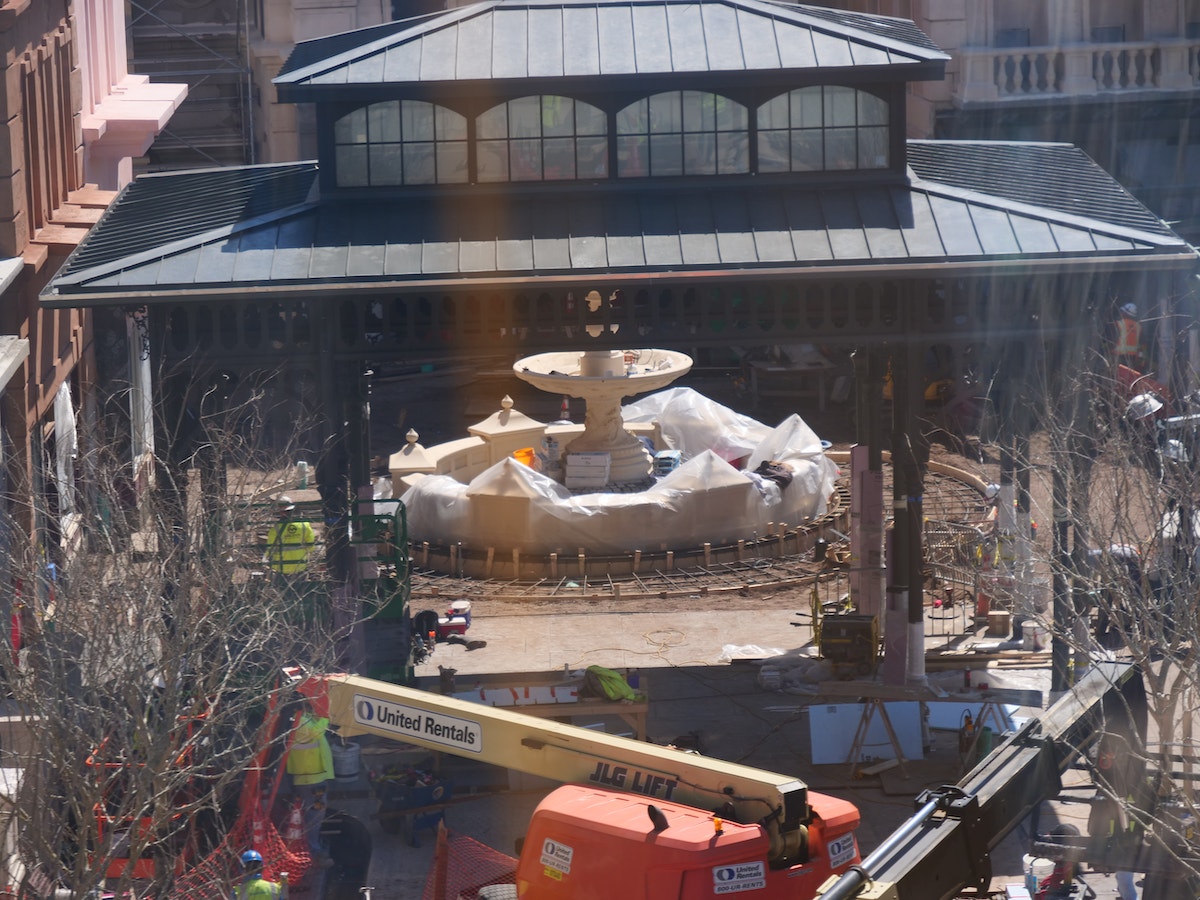 Further down this Parisian street, a large fountain sits waiting for concrete to be poured around its base. Rebar is in place, which means the pavement won’t be far behind. 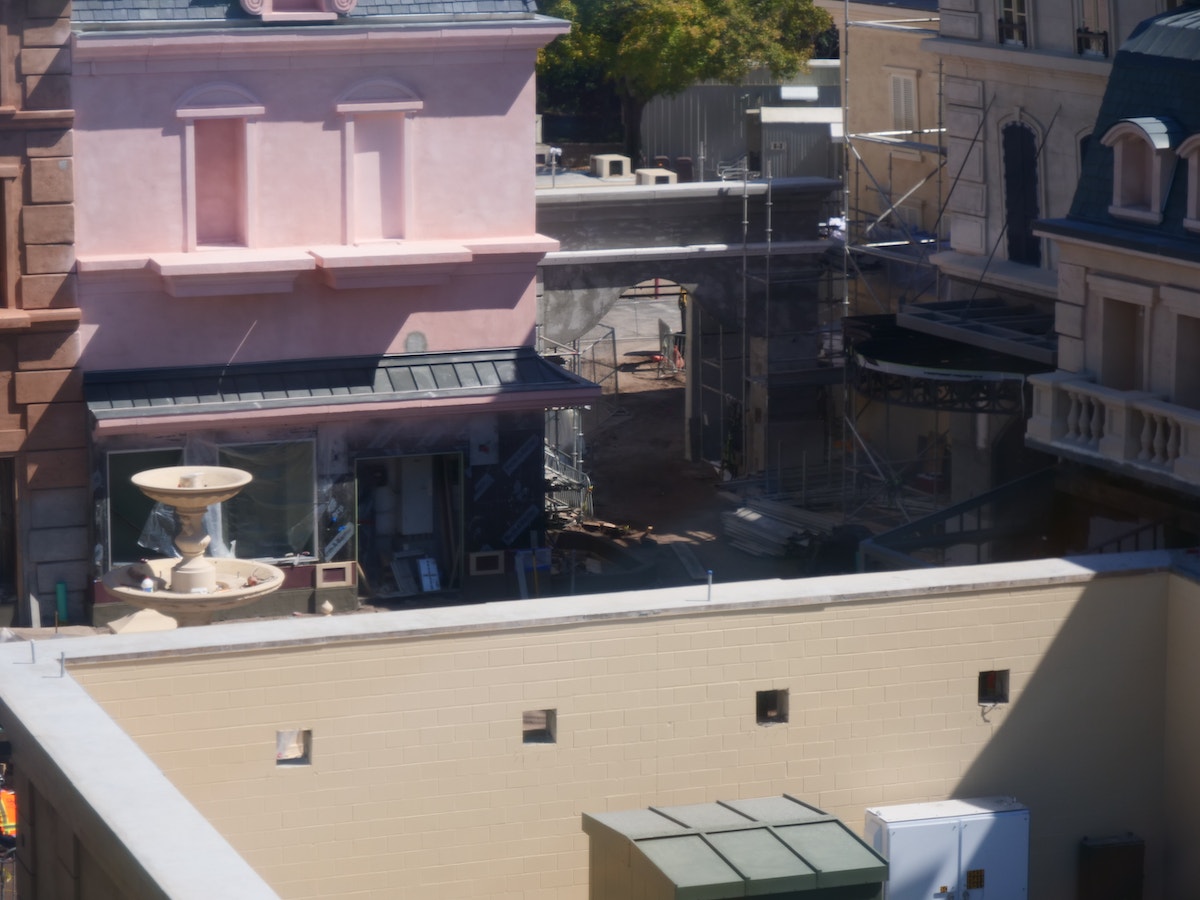 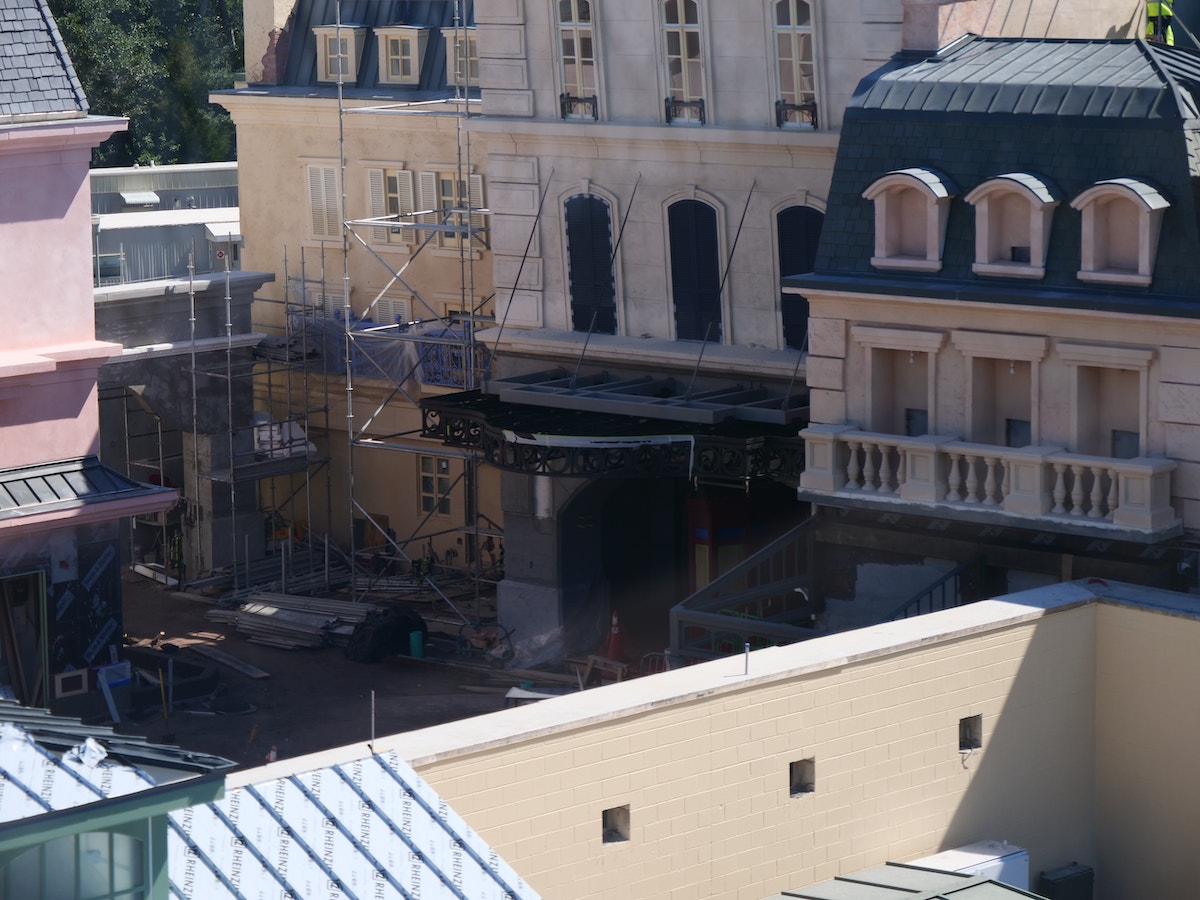 Just behind that fountain, an overhang with detailed ironwork is perched above what we expect will be the entrance to the attraction. 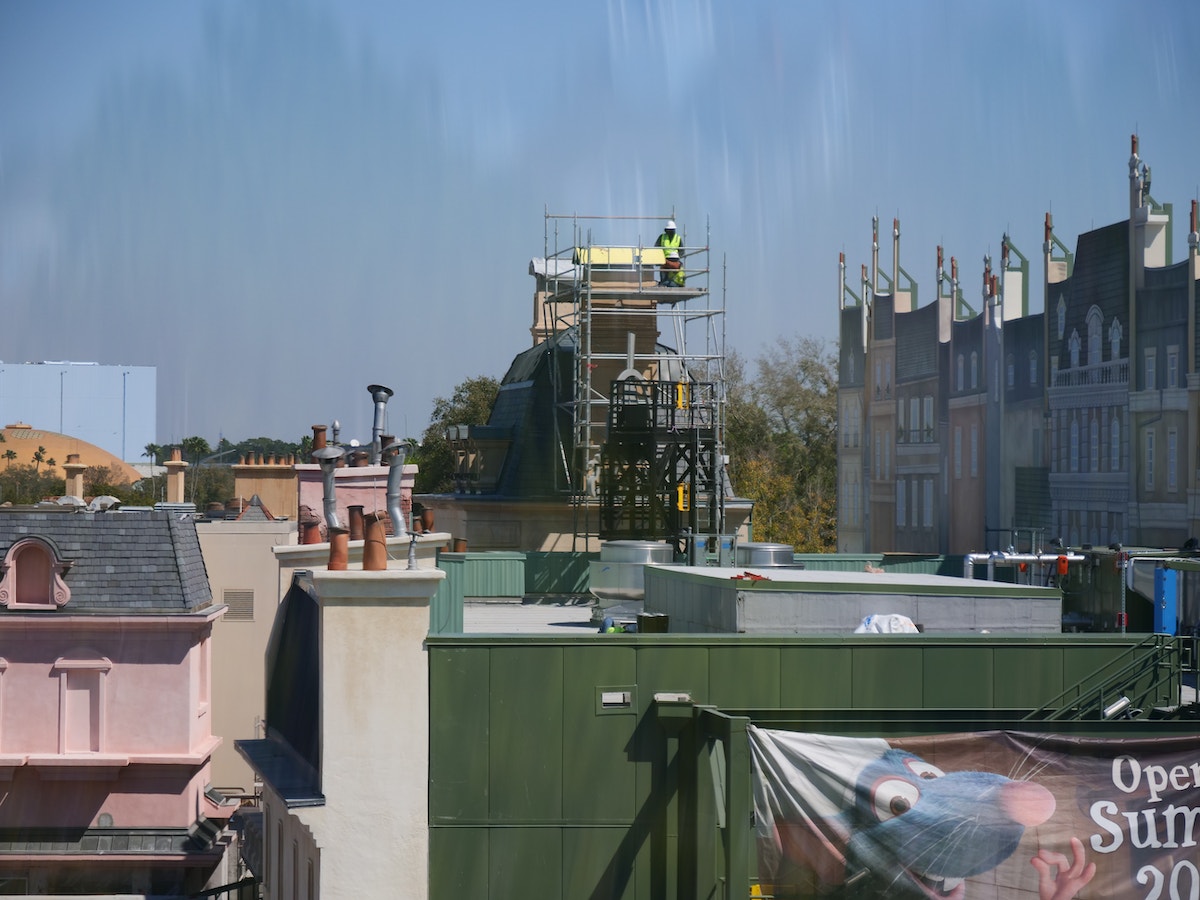 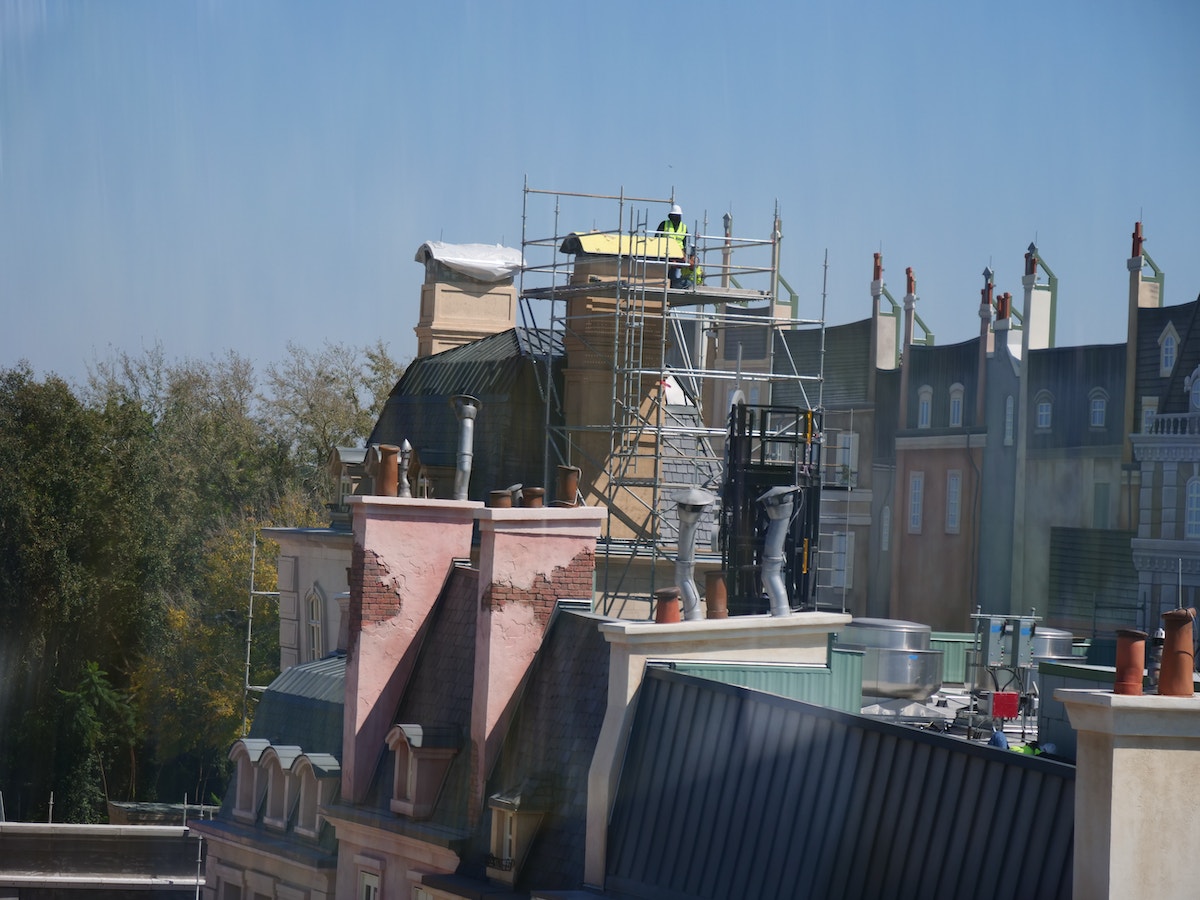 Finally, high above that overhang, workers are adding details to one of the building’s chimneys. As we can see on the shorter chimneys below, a lot of details are being applied to the buildings to give them a more aged look. Missing paint and stucco are a couple of the small touches used to make these structures fit the theming of the attraction and its namesake movie. 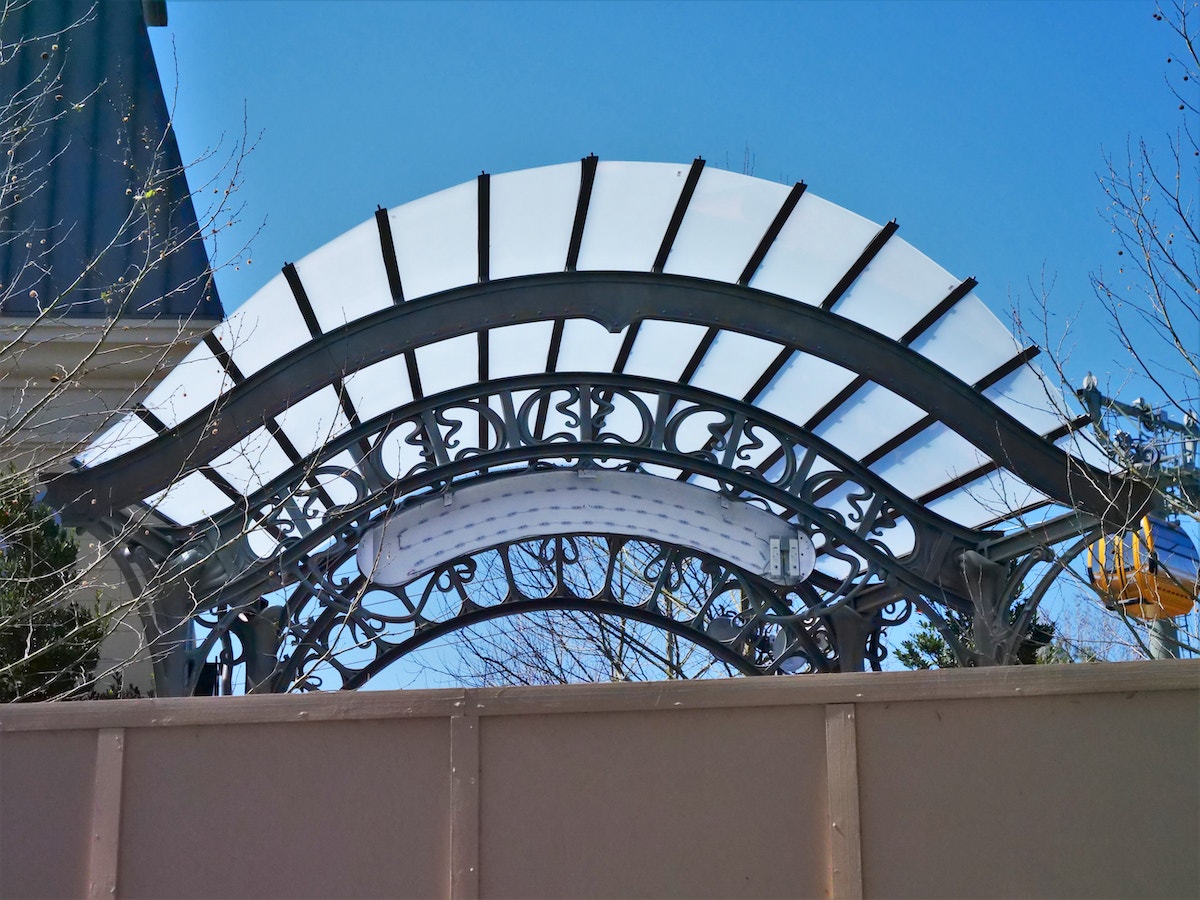 As expected, today we found that the archway did indeed have the last of the translucent panels installed. 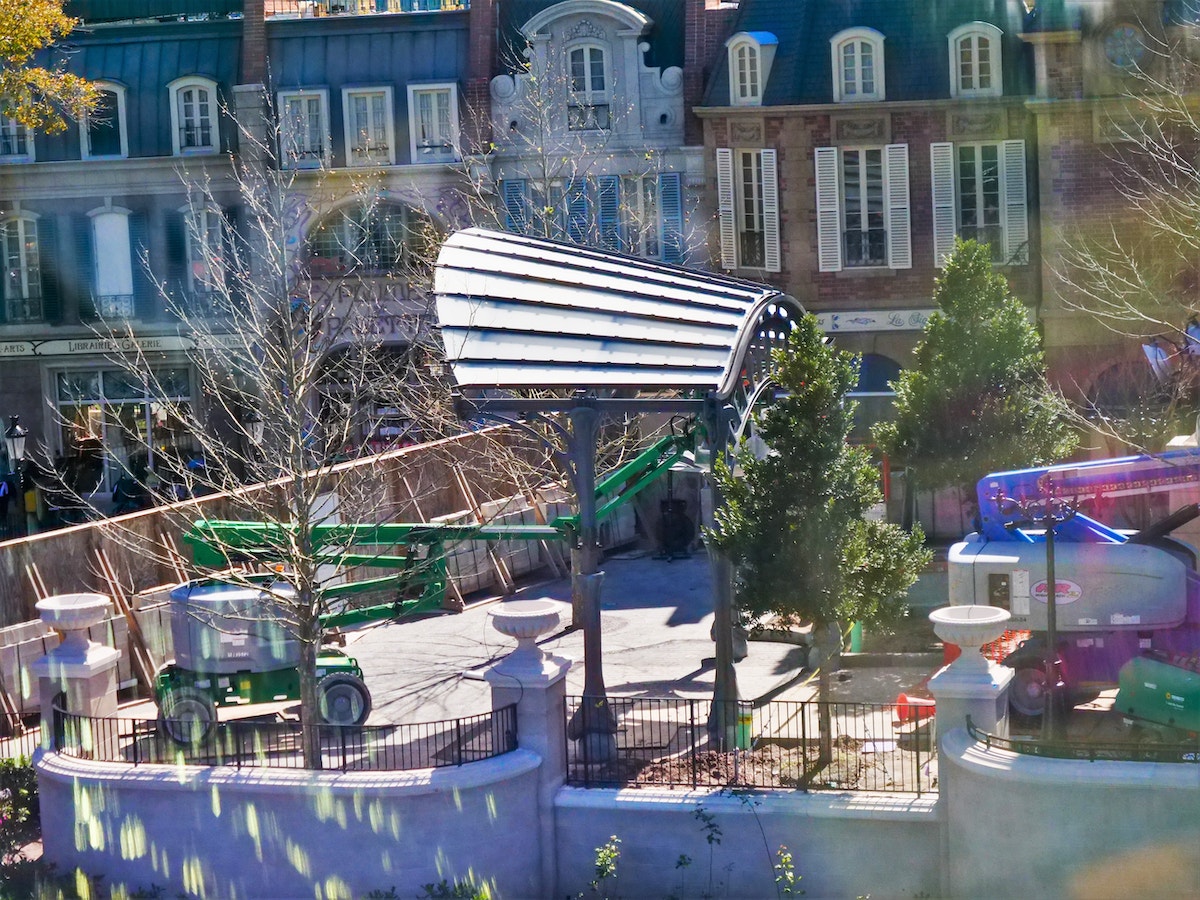 The archway, which will welcome guests into the France Pavilion expansion, is now nearly complete, seemingly only missing the backlit sign.

Are you excited for Remy’s Ratatouille Adventure at EPCOT? Let us know your thoughts about the upcoming ride in the comments!