Do you ever wonder what the Kitchen Sink would taste like if it was Dole Whip instead? Wonder no more, because that is basically what the Tropical Hideaway has created with their new Speciality Loaded Whip. 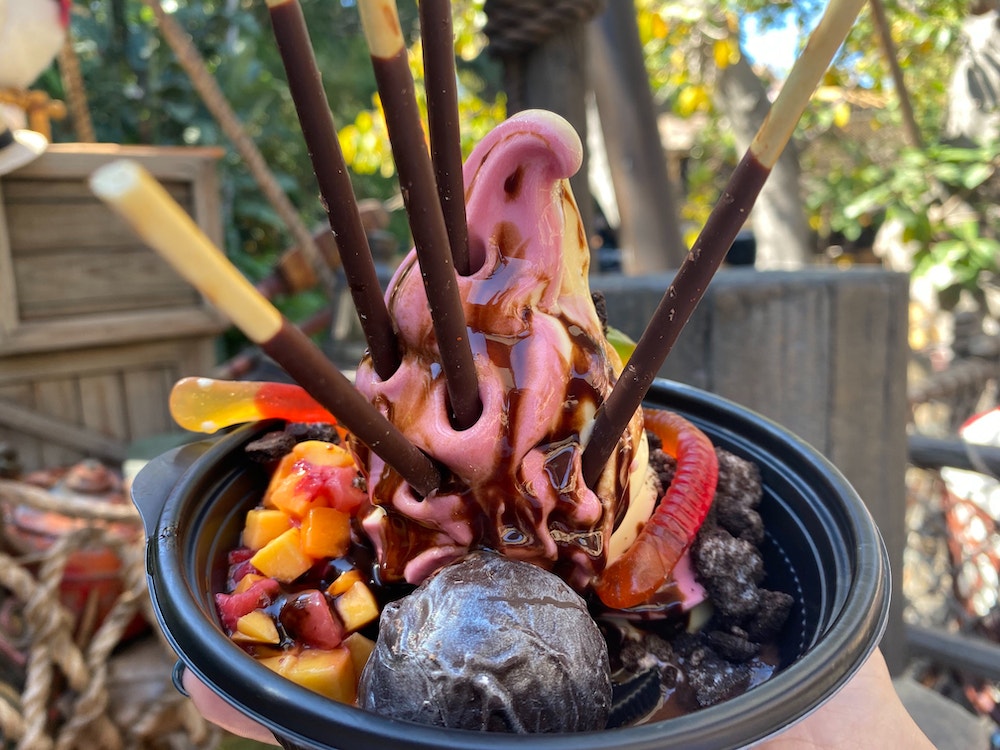 This new specialty Dole Whip, which was made in honor of the 25th anniversary of the Indiana Jones Adventure attraction, comes in at $7.99 and features a swirl of Pineapple and Raspberry Dole Whip and is topped with Chocolate Cookie Crumbles (Oreos, if we are being honest), chocolate sauce, a chocolate boulder, gummy snakes, mango, strawberry fruit pieces, and some Pocky for good measure. 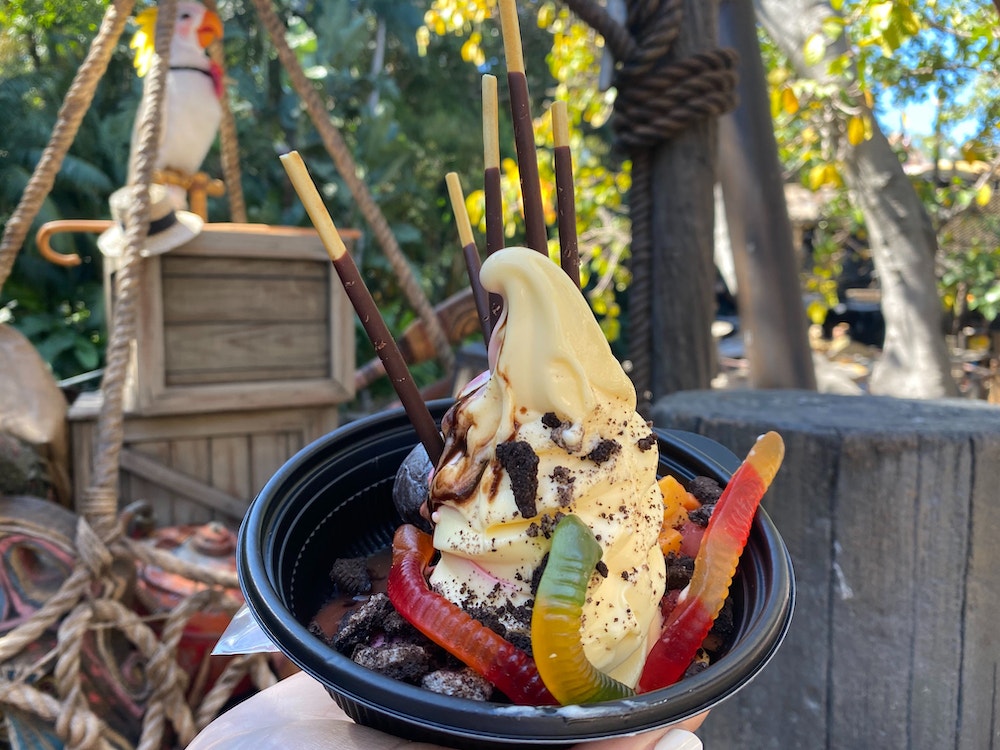 As you can see, the concoction is quick to become a melty, drippy mess, but let’s see if the flavor is there, or if ALL the flavor that is there actually works together. 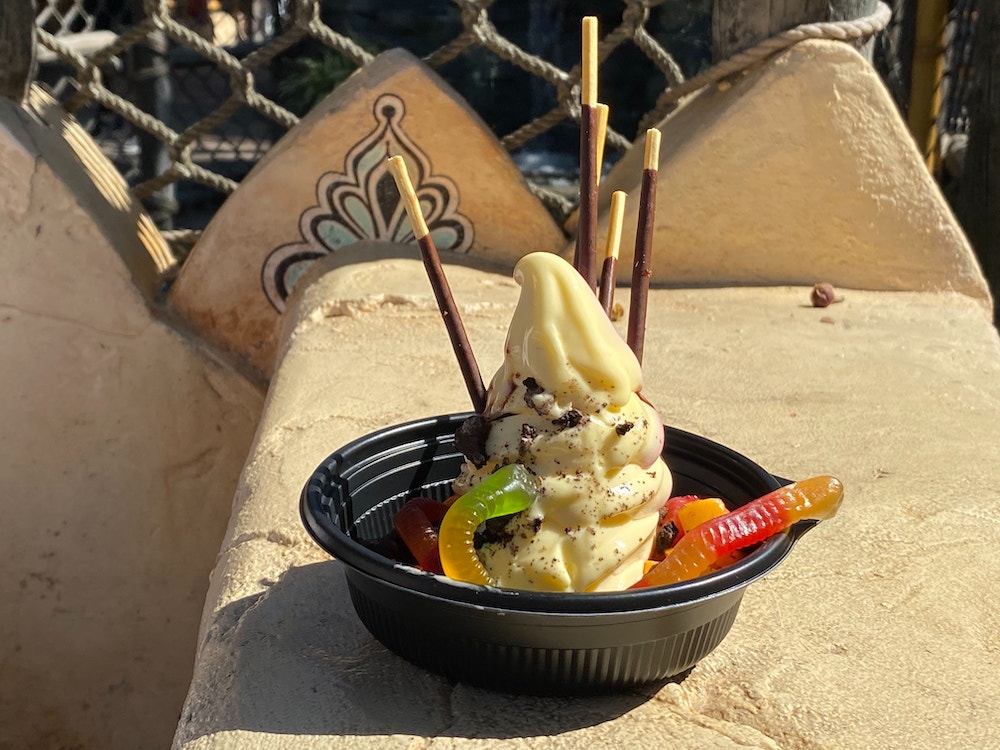 With the base being a mix of citrus and fruit Dole Whips, it overall gives a very fresh taste to the treat and fortunately, the Oreo added some extra texture and flavor without destroying the fruity quality of the dish.

The creep-crawly gummy snakes not only pay homage to the famous archeologist, but are also always a fun thing to snack on. They didn’t add much in terms of flavor to the Whip (haha, whip…), but added a fun visual aspect. 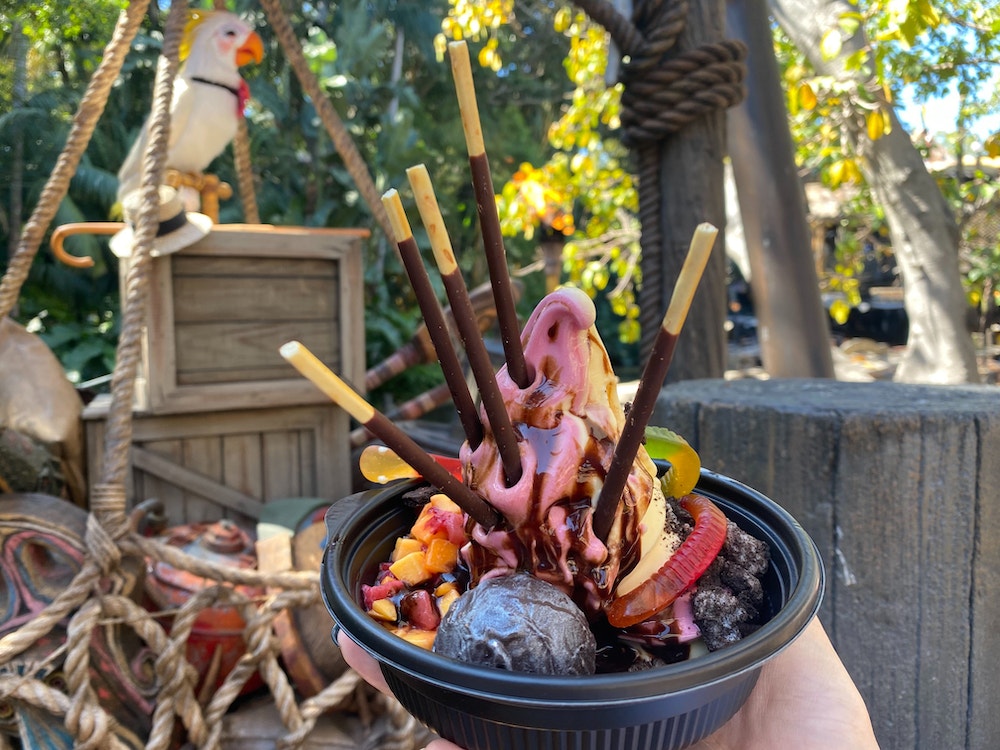 The “boulder” is a tasty, yet dense sweet chocolate cake similar to a cake pop (minus the stick) and was a fun touch that added some contrast to the dish. The fruit pieces were super moist and not too chewy. 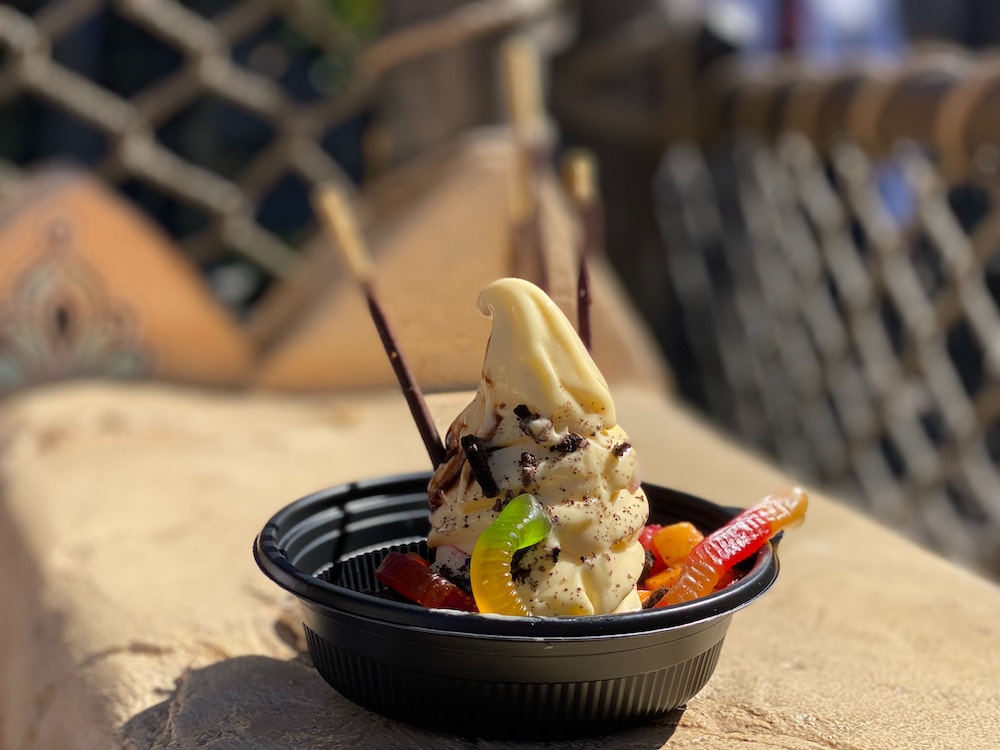 The Pocky, which are described as “chocolate-covered spears” to stay with the theme, are also a tasty delight and really brought the whole anniversary dish together. 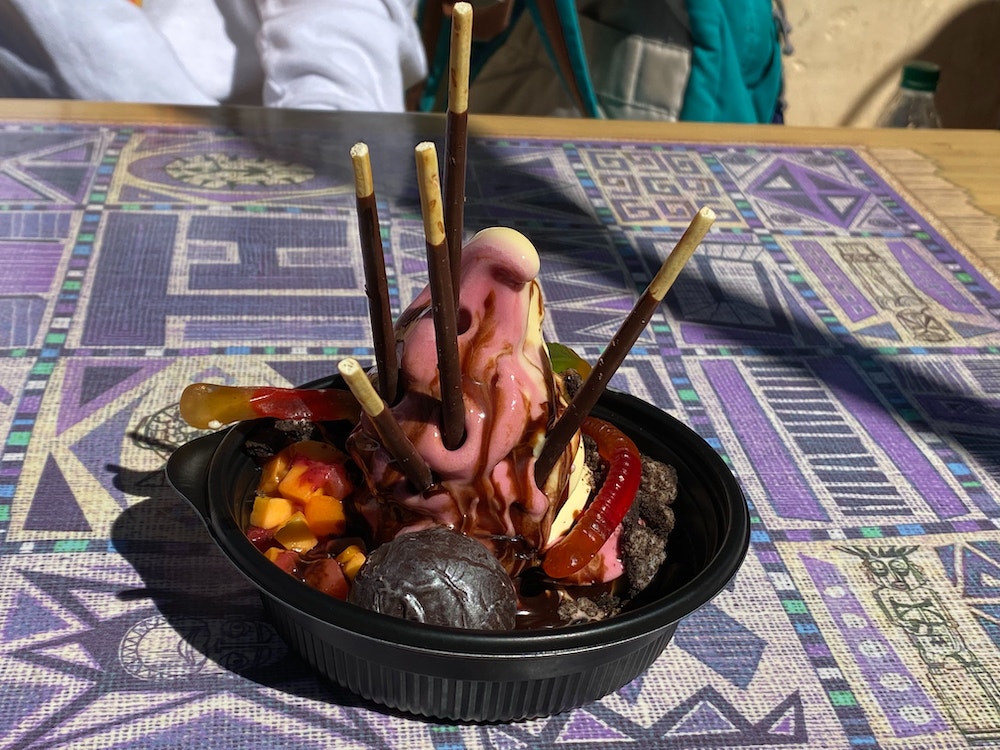 To finish things off, the portion size is incredibly large and definitely meant to be shared, but overall it’s a really fun and tasty treat. 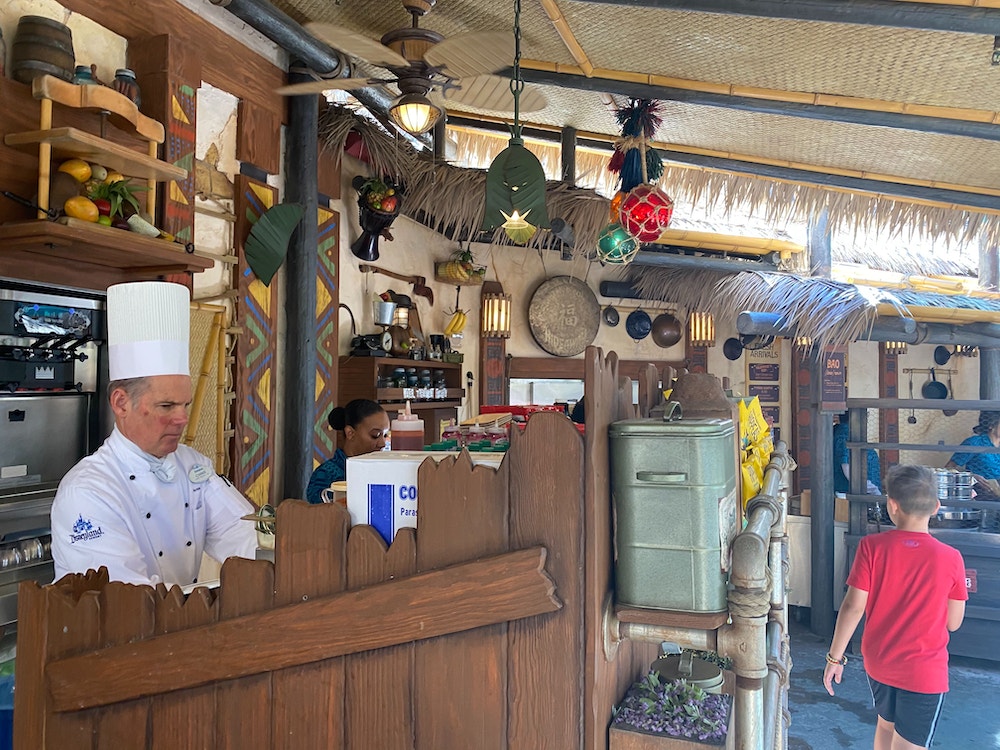 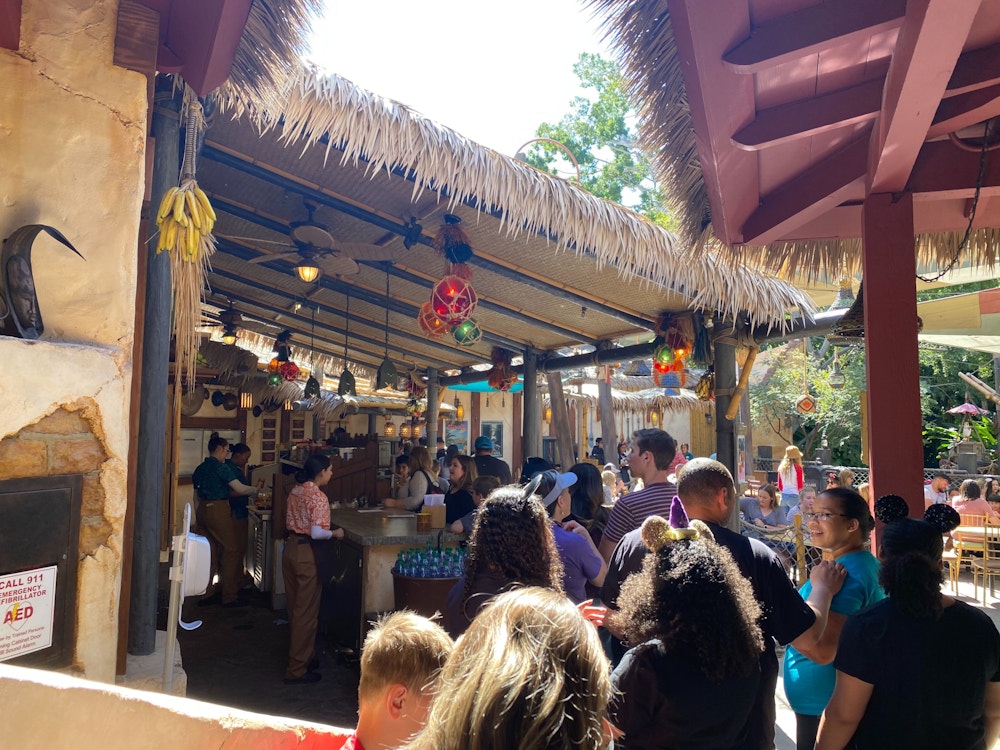 You might want to hurry over though, because it seems like the line for this dessert is growing by the minute!