BOOK REVIEW: “The Great Crump Presents His Magic: The Art of Rolly Crump”

For many, the name Rolly Crump is forever connected with the large smiling clock that greets guests at Disneyland’s “it’s a small world.” Or perhaps, to some, he’s the guy showing ole Uncle Walt the newest wonders coming to the 1964 World’s Fair.

A Disney legend to be sure, Crump designed everything from “The Haunted Mansion” to EPCOT’s Land Pavilion, but his artistic tastes and talents were often weirder and more saucy than what could be found in a Disney park. 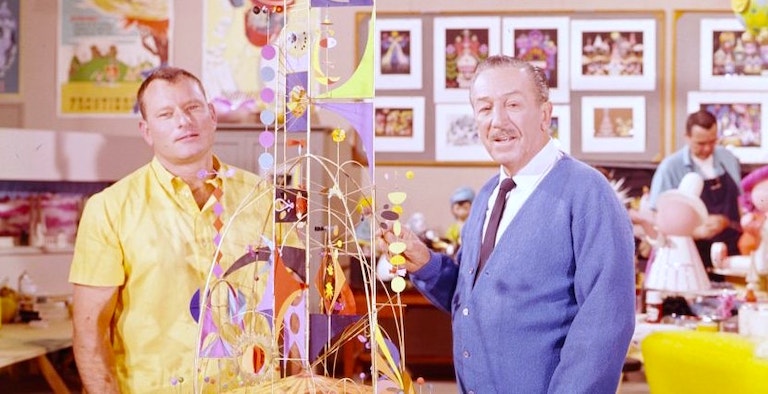 In “The Great Crump Presents His Magic: The Art of Rolly Crump,” Baby Tattoo publishing compiles a treasure trove of Crump’s playful style, found in everything from psychedelic posters to little wooden figures. There’s a naughty wit to most of it, and the more brazen it gets, the more cheeky the delivery. One piece, done in the Japanese artistic tradition of Ukiyo-e, shows two figures in (ahem) an intimate exchange with the title simply reading “Aerobics.” And this was a piece he did at age 70!

But never fear, Disney nerds! There are plenty of wonderful pieces in this book for you as well, including models of the “small world” facade and the Tower of the Four Winds. You’ll also find sketches of “Tiki Room” gods and some concept work for the never-made “Museum of the Weird.”

Crump has always been prolific, and his work so beloved by both Disney fans and underground art collectors alike ,that many of the pieces found in “The Great Crump” helped net him over half a million dollars at auction in 2018. So, if you’d like to take a surprising (and sometimes salacious) trip into the artistic brain of a Disney legend, there’s no better chance than this book!

Purchase the softcover or pick up a limited-edition hard copy over at Baby Tattoo!