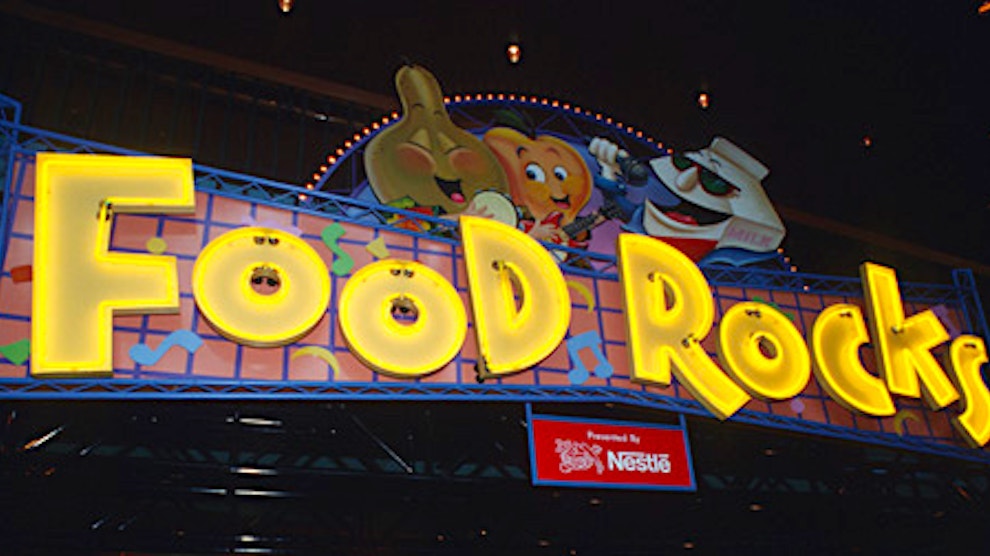 Today in EPCOT history, Food Rocks jammed out for the first time in 1994 after replacing the former Kitchen Kabaret in The Land Pavilion. This spoof of concert benefits such as World Aid and Farm Aid took on a different flavor…promoting good nutrition with a cast of top-name foods such as the Peachboys, Pita Gabriel, Neil Mousakka, and Chubby Cheddar. The show, with host Fud Wrapper, took its final bow on January 3, 2004.

To commemorate the debut of the former attraction, we’ve brought back this old WDWNT: The Magazine piece by Tom Corless on the history of Kitchen Kabaret and Food Rocks. You can even check out an old warehouse tour where entire boxes of animatronics for the attraction were sent on our YouTube channel. While these attractions may have been sent down the sink disposal, remember, don’t knock fiber… it’s nutritious.

The Kitchen Kabaret Revue was a 13-minute audio-animatronic show that was located inside The Land pavilion, premiering on October 1, 1982 with EPCOT Center. The host, Bonnie Appetite, introduced the various acts in a musical review and comedy format that advocated healthy eating and provided a basic primer on the four food groups: Meat, Dairy, Cereal, and Fruits/Vegetables. 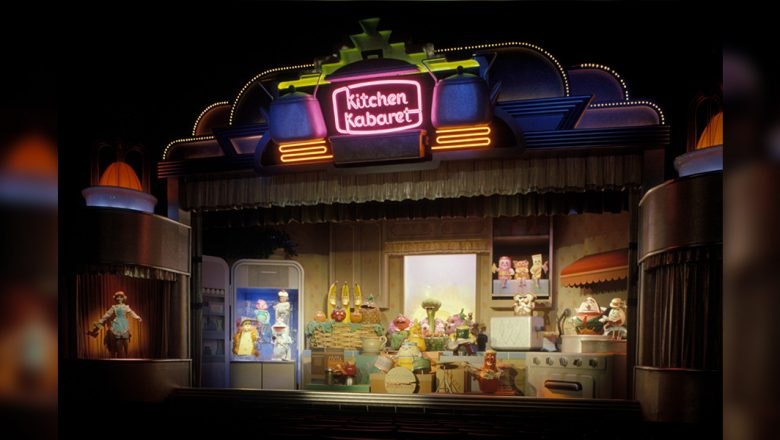 The entrance stood on the bottom floor, to the left side. The entrance used pastel colors like the remainder of Epcot, but looked like a Broadway theater with its marquee. The first waiting room had guests cross under another marquee, complete with a host of production posters along the walls. The final waiting are had a third marquee, calling the attraction simply “Kitchen Kabaret”. Once the doors opened and guests were allowed in the theater, they were greeted with a giant silver curtain that read Kraft Central Foods as they sponsored the entire pavilion at the time. Once guests were inside, the show would begin. The show went something like this…

Bonnie sings this at the start of the show. She looks a bit tired. She has cookbooks and her hair wrapped in a bun. The lights turn off, and the next performance comes.

The Kitchen Krackpots band (containers of ketchup, mayonnaise, a spinning jar of mustard, etc.) rises from the floor and plays a boisterous ragtime intro, as Bonnie reappears, now in a showgirl or cocktail waitress costume, to “Thank you all for coming to (her) kitchen.”

Mr. Dairy Good is a singing milk carton who emerges from a refrigerator holding an old fashioned radio-style floor microphone close to his mouth, crooning introductions to three dairy products—Miss Cheese, Miss Yogurt, and Miss Ice Cream — in the style of 1930s costume extravaganzas. Each of the dairy products performs a brief cameo in a stylized manner (e.g., Miss Cheese sings like Mae West). Every time they came out, ice cold fog would emerge from the freezer.

The Cereal Sisters—Oats, Rice, and Corn—sing a parody of Boogie Woogie Bugle Boy in the style of the Andrews Sisters, accompanied by a bugle-blowing bread slice. The bread slice wears glasses and is revealed when a kitchen cabinet is opened. 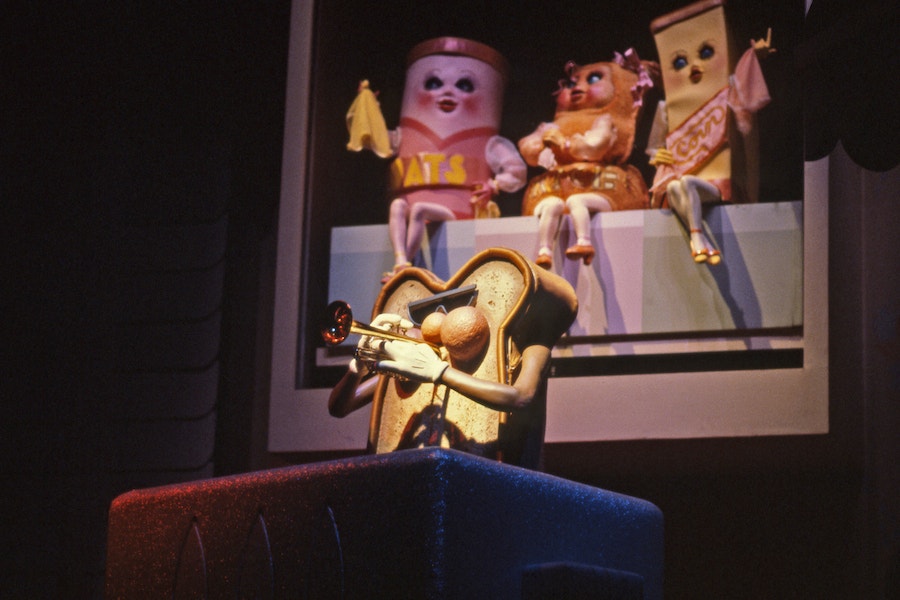 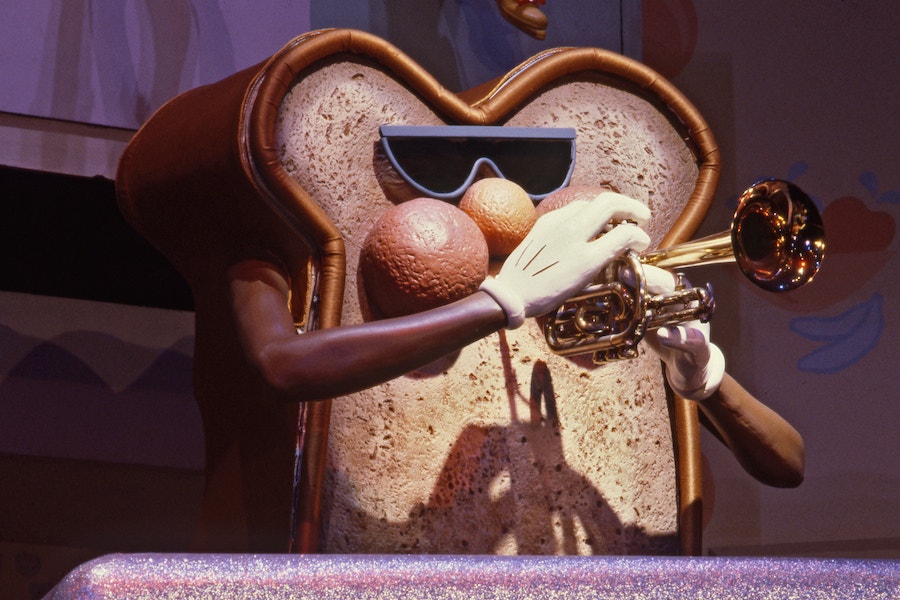 Hamm & Eggz is a vaudeville-style comic rendition of The Meat Group Can Help You Keep Strong, in which Mr. Hamm and Mr. Eggz tell jokes and sing a few short ditties. At the end, Mr. Hamm gets angry because Mr. Eggz is telling corny jokes, and decides to split from the group to join another protein group. Some of the bits use sliding animated scenes to illustrate what’s going on, very much like the “All the guys that turn me on, turn me down” sequence from the Country Bear Jamboree. There are also running gags in this part of the show. Mr. Eggz’s bow moves if he’s laughing, and at the end of their parts, smoke bellows around them protecting these two from being seen moving into the ground.

Night sounds, Latin percussion, and low lighting set the mood for this number, as the produce (broccoli, tomatoes, bananas, etc.) begin to chant “Veggie-Veggie-Fruit-Fruit! Veggie-Fruit-Fruit!” Bonnie Appetite, now in a Carmen Miranda-style carnival outfit, and perched upon a crescent moon that descends from the ceiling, sings. Here, another running gag is present. The center broccoli piece says “cha cha cha!” at times while his glasses flip up and down.

Bonnie appetite lowers from the upper part of the stage in a strange gown while sitting on the moon. Bonnie and the cast sing a medley of each of their songs. All of the cast come back out, and Bonnie re-appears in her cooking apron and says good bye, before the curtains come down.

Nestle was scheduled to take over sponsorship of The Land in 1994, so the pavilion was the first in Epcot to be overhauled in the early 1990’s. In addition to changing Listen to the Land to Living with the Land, replacing Symbiosis with the Circle of Life: An Environmental Fable, and updating the pavilion’s dining and shopping, Nestle wanted to update Kitchen Kabaret to feature updated music and be more entertaining than educational. Thus Food Rocks was born on March 26, 1994.

Guest would still enter under a very bright broadway style marquee featuring the new name, but the waiting area was completely remodeled. The first waiting room was now very bright and featured many exhibits where guests could learn about good nutrition and the food pyramid.

The show was themed as a benefit concert for good nutrition hosted by Fud (pronounced food) Wrapper. However, the show was continually interrupted by the Excess, a junk food heavy metal band that detests nutrition. In the end, Excess lost their power as Fud Wrapper exclaimed “No power, you guys have been unplugged. There’s plenty of foods out there that are good to eat, but remember, always eat with moderation”. 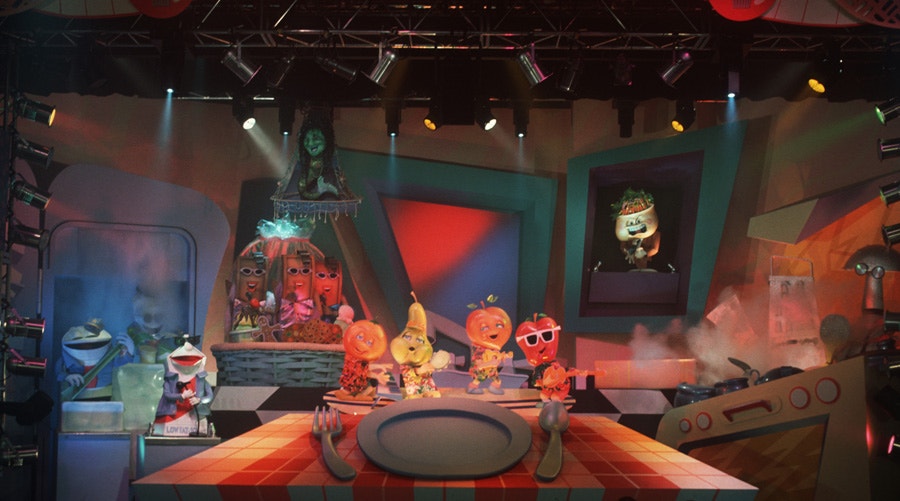 The Audio-Animatronic characters in the show were food items with human features. The music was based on popular songs by well-known performers, with lyrics adapted to the topic of nutrition. For example, “The Peach Boys”, singing “Good Nutrition”, was based on The Beach Boys’ song “Good Vibrations”. Five of these acts used the voices of the parodied musicians themselves: Tone Loc, Neil Sedaka, Little Richard, The Pointer Sisters, and Chubby Checker all actually performed in the show. Many of the characters returned for the finale.

Here is a list of the acts in order, including what songs were parodied:

The only characters re-used in the show was the milk. The new animatronic characters were mostly flat and featured simple moving facial features.

Food Rocks closed on January 3, 2004, with rumors that it had something to do with a large building being constructed just behind The Land pavilion, in the space set aside in the 1980’s for Epcot’s movie pavilion (which eventually evolved into the Great Movie Ride and the Disney-MGM Studios). On May 5, 2004, it was announced that Soarin’ Over California from Disney’s California Adventure would be cloned for Walt Disney World and replace Food Rocks. Despite replacing the show, the queue for Soarin’ simply travels through the former theater, leaving the Food Rocks stage encased behind the walls.

Do you have any cherished memories of Kitchen Kabaret or Food Rocks? Let us know in the comments!

My childhood memories are from Kitchen Kabaret most definitely, but I had to go watch YouTube for videos of Food Rocks. While I’m a fan of a good parody (shout out to Weird Al), the animatronics for Food Rocks did not do justice for singers the likes of Aretha Franklin and little Richard. There is clearly a big difference between Mr Milk left over from Kitchen Kabaret and the subsequent version. It’s sad that it was removed for simply the queue of Soarin’.