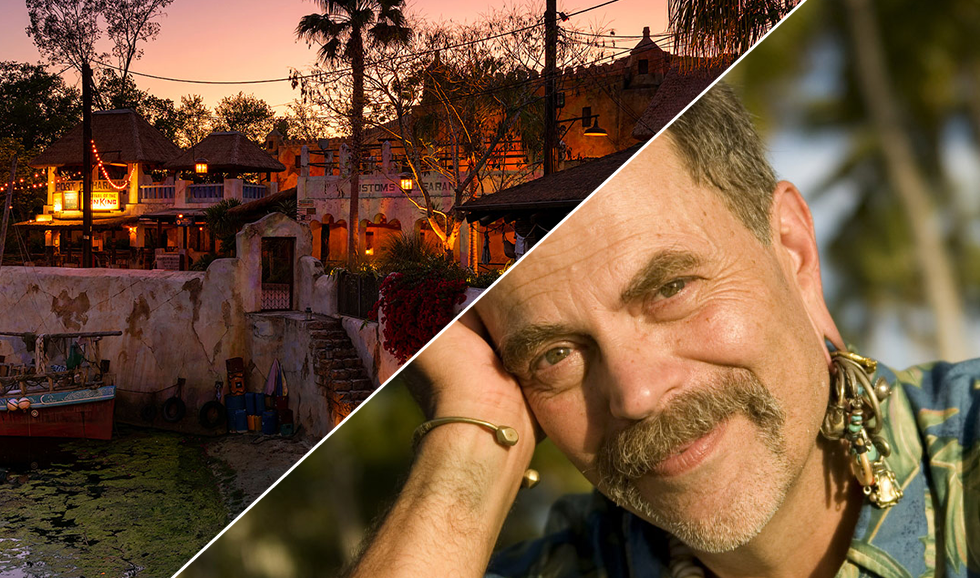 Joe Rohde, Imagineer and creative force behind Animal Kingdom, has been taking Disney fans on a digital tour through some of his favorite areas of the park. Today, we showcase his thoughts on the African portion of the park including Harambe village, the Kilimanjaro Safaris, and the Gorilla Falls Nature Trail. Be sure to check out his Instagram for the full posts.

Joe starts us off with a little history on Harambe.

“None of our lands are supposed to be geopolitically real like say, Kenya. Harambe looks a lot like Lamu in Kenya, but not in a replicative way, and there are substantial stylistic departures. It’s more like a smash-up of Lamu-Kenya and Arusha-Tanzania. Both are a kind of mercantile border town, as is Harambe. The word Harambe means “let’s work together or pull together.” Implicitly on behalf of wildlife.

What can we read in this environment? Clearly multiple levels of history and conquest, as with Lamu. There’s a Portuguese fort, some remnants of Omani reign, a British Colonial era, and Independence in 1961. Must be a valuable place. The building are old and weathered, but not intended to look neglected, and there’s lots of evidence of reutilization and upcycling…from economic stress? So people are striving here. I mean, the municipal logo is a Maasai shield and an industrial gear with the word ”enterprise.”

In such a palpably commercial place, where people are clearly striving to get ahead, what is the value of elephants vs elephant ivory and rhinos vs rhino horn? This is what wildlife conservation is – a value equation. And the value at Disney’s Animal Kingdom is The intrinsic value of Nature as supreme and untradeable. However subtle and nuanced, that is conflict, which drives narrative.”

Now let’s take off on a safari!

“The animals that you see on Safari represent the savanna ecosystem, but it would be extraordinary to see them all in one place or in one day. I’ve spent entire days on safari and seen almost nothing. And while there are many famous animals, there are also some rare animals that you might never see if you went on safari in Africa. Eland for example, are very shy and will not let you get within 1000 feet.”

[The safari} exists within a network of managed habitats stretching all around the world, which relate to each other in order to preserve the genetic pool of these animals, and in some cases, as we have done with White Rhinos, to re-introduce them to the wild.

Disney’s Animal Kingdom could not exist without the Disney Conservation Fund and it’s work out in the real world….I would never discourage someone from taking a real Safari trip to Africa. But I can assure you that the Safari that you might take here has certain advantages, and is not merely a show, it is a working environment engaged with the conservation of wild creatures.”

Now that we’re off our safari trek, let’s go with Joe over to Gorilla Falls!

“Gorilla Falls Nature Trail is a pedestrian experience into the jungles adjacent to our wildlife reserve….It features a family of lowland gorillas, which are sexy and impressive, yes, but I don’t know how often you’re ever going to get a chance to see an African Weaverbird make a nest, or ever see a naked mole rat, or a jacana. Because there is no ride system, people often undervalue these experiences.

But, at a place like Disney’s Animal Kingdom, where the best rewards come from slowing down and observing closely, the nature walks are some of the highest value for the investment that you can get. Data from zoos suggest that people spend an average of 30 seconds looking at an animal exhibit. That’s really not enough time. If you wait for mother nature, she will put on a show. But you have to wait.”

Again, make sure to check out Joe’s Instagram for his own pictures and full stories.