While many of us are probably envisioning nature overtaking the parks throughout the extended closure––bunnies and ducks running rampant, overgrown hedges, and the like––Disney is actually still maintaining all of its green spaces during this time. Essential workers still carrying out their duties at the parks include the horticulture team, who’s ensuring that each of the EPCOT International Flower & Garden Festival character topiaries stays perfectly lush and trimmed. 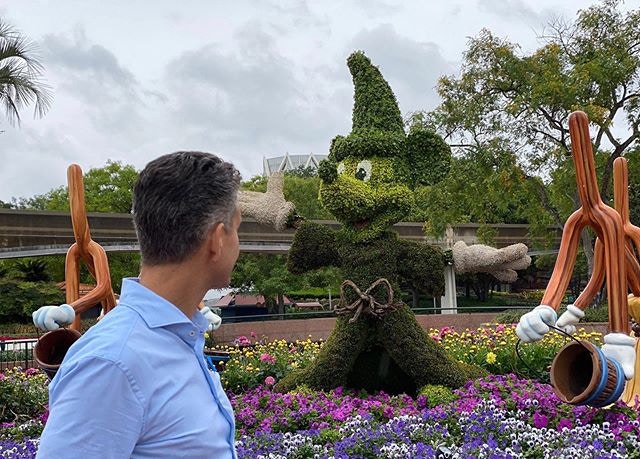 Walt Disney World Resort President Josh D’Amaro recently stopped by EPCOT to check in on the park and shared a photo of the Fantasia-themed Sorcerer Mickey topiary near the Imagination! pavilion. On his Instagram, he wrote the following caption:

“Like many of you, I spend most days at home, but every so often I come in to thank the small group of Cast maintaining the magic at WDW. On a visit to #EPCOT this week, I was struck by the beauty and inspiration of our Flower & Garden Festival topiaries which are still here. They are a testament to how amazing our horticulture team is.

Our Disney parks are places with so much emotion, memories and enormous potential – potential the world needs to believe in right now. And potential our Cast and Imagineers have anchored their lives to. I’m reminded how EPCOT stands out in this message of hope and the world coming together. And while EPCOT and other parts of our Resort are always special, they aren’t truly alive without our Cast. I know we’ll be back to make magic one day soon.”

D’Amaro reassured Cast Members, saying that he knows they’ll “be back to make magic one day soon.” Also released today was a letter from him to Cast Members impacted by the upcoming company-wide furloughs, which are set to go into effect tomorrow, April 19.

If you’d like to see all of this year’s EPCOT Flower & Garden Festival topiaries from home, click here for a photo and video tour! And here’s to hoping Chef Remy isn’t caught in a tangle of thyme by the time we get back…