RECIPE: Make Walt’s Favorite Chili with This 1958 Recipe from The Walt Disney Archives

Chili is typically considered a wintertime staple, but chilly weather can last well into spring! If you’re still experiencing some colder weather where you are and need meal ideas while we’re all at home, D23 recently released the ingredient list to Walt Disney’s very own chili recipe. 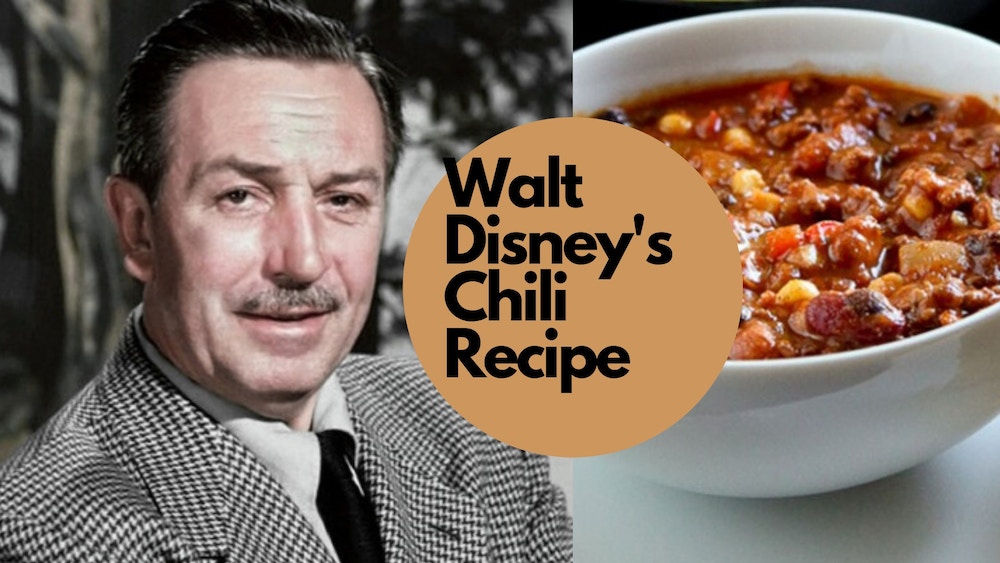 According to the Walt Disney Archives, Walt was a Midwestern boy and had a Midwestern appetite, so he stuck to familiar “meat and potatoes” dishes. His wife Lillian once recalled, “He liked basic foods. He loved chili.” Walt would eat this favorite food at high-end restaurants like the iconic Chasen’s in Beverly Hills, but was equally happy eating it at home. His favorite at-home version was a mixture of Gebhardt’s and Dennison’s canned chili. In addition to the canned variety, Walt enjoyed fresh chili at home and at the Disney studio Commissary. The recipe below, which dates back to 1958, comes from a file in the Walt Disney Archives marked, “Walt’s Favorite Foods.”

This would be the perfect thing to make before sitting on the couch as a family, wrapping up in a big blanket, and turning on Disney+ to stream a movie. And this chili recipe serves 6-8, so you’ll have plenty to save for leftovers and heat up for another day during the quarantine! Don’t forget the Fritos!

And if you like a little extra zest, you can add a pinch of these spices:

Soak beans overnight in cold water. Drain, add water to cover (2 inches over beans), and simmer with onions until tender (about 4 hours.) Meanwhile, prepare sauce by browning meat and minced garlic in oil. Add remaining ingredients, and simmer for 1 hour. When beans are tender, add sauce to beans and simmer for half an hour.

For more information on Walt’s favorite foods and some favorites from around Disneyland Park, check out Eat Like Walt: The Wonderful World of Disney Food by Marcy Smothers.

Check out some of our other recipes!

Next
TODAY on WDWNT LIVE: Join Tom for an Epic Pixar Animation Countdown at 11:00 AM, Plus an Evening of Disney Music with DJ Cosmic Reid!