The Walt Disney Company has seen a whirlwind month within the market, getting out-performed by Netflix only to gain advantage shortly after with the White House’s announcement for a phased reopening of businesses to potentially begin in May. However, investors haven’t fully regained hope in the company, with UBS analyst John Hodulik claiming that Disney is currently in “the eye of the storm” in terms of recovery. 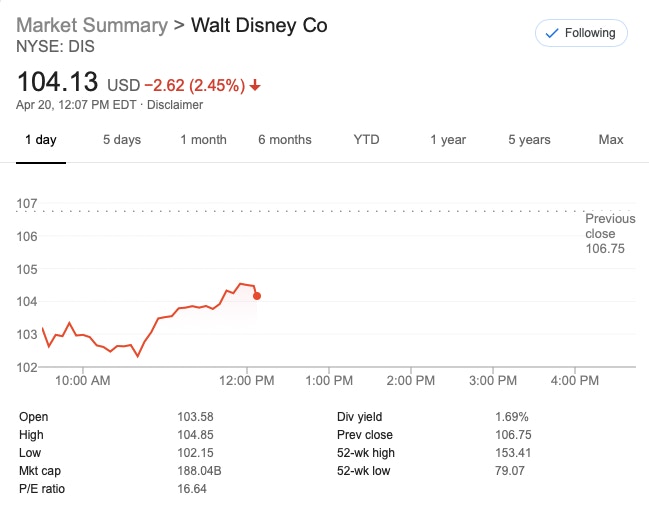 Disney stock has received its third downgrade so far in April, with shares down by 2.45% this morning.

According to Hodulik, while all aspects of Disney’s business faces risk from the COVID-19 outbreak, the parks are among the most impacted. He anticipates that the company won’t be able to reopen its parks until Jan. 1, 2021, with restrictions on parks operations and attendance spanning far beyond that.

Hodulik commented on the need for social distancing and other health protocol:

“[T]he economic recession plus the need for social distancing, new health precautions, the lack of travel and crowd aversion are likely to make this business less profitable until there is a widely available vaccine.”

He believes the parks will resume full operation in about 18 months, coinciding with the earliest available vaccine for COVID-19.

There are also some concerns about the company’s media business, with ESPN scrambling to salvage sports leagues and box offices still trying to figure out new release strategies for movies while theaters remain shuttered worldwide. The parks represent 27% of the company’s revenue, while the film and television studios account for 18%, according to Credit Suisse. Disney is still facing an uphill battle as the company has accrued $13 billion in debt and credit agreements in order to mitigate the financial effects of closing down its parks and film studios.

Next
More Permits Filed for Themed Sets at Upcoming Play! Pavilion in EPCOT