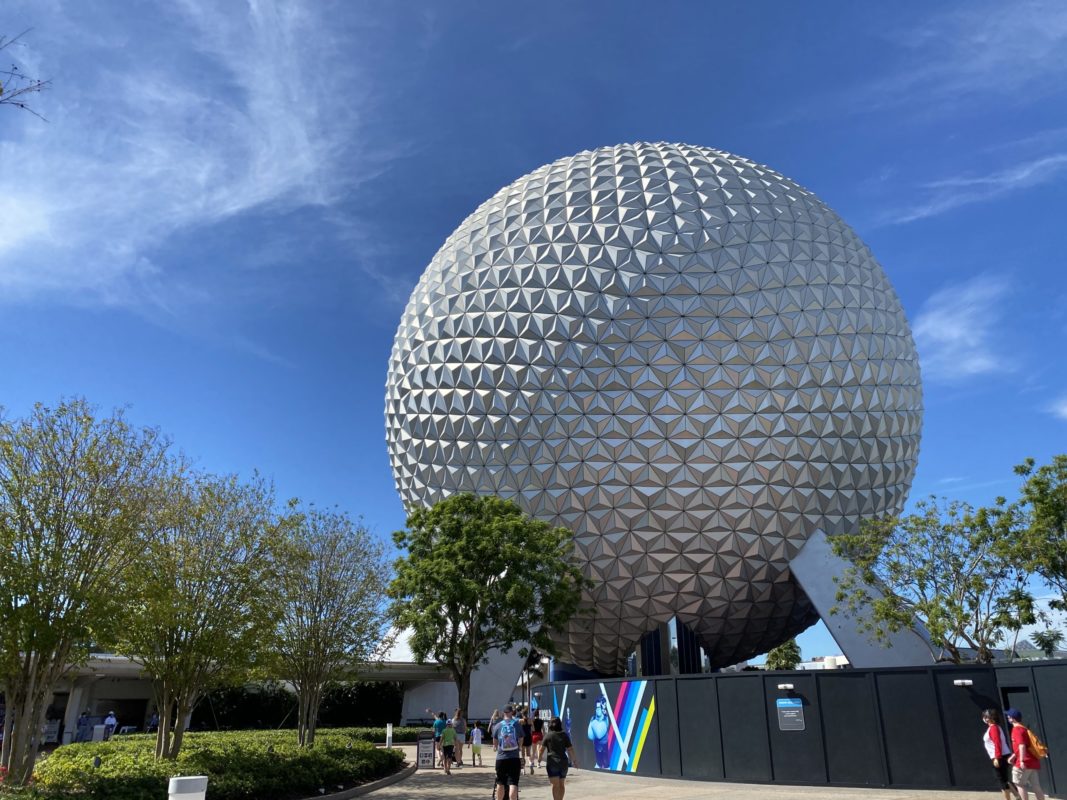 Greetings, World Travelers! We thought today would be the perfect day to check out what’s new at EPCOT, and after all the fun new merchandise we found, we’re glad we stopped by today. Let’s get started!

Unlike with the other parks, the day always starts with parking lot drama at EPCOT. The parking Cast Members won’t allow cars to line up until some time between 10:05-10:20am, and that’s after telling us that we should return to line up at 10:30am. With no where to turn around nearby, and parking on the shoulder not allowed (trust us, we tried), we’ve devised an intricate loop of the nearby cloverleaf system to deliver us back to the parking gate in as little time as possible. Today, we were allowed to line up around 10:15am.

Once we were allowed to enter the parking lot at 10:30am, we were held once again at the tapstiles prior to entering the park for just a few moments. Lines formed as guests arrived from the parking lot, and Cast Members were given the approval to allow guests to enter the park at 10:48am, an odd time in our opinion, but anytime is a good time to go to Disney!

We took a moment to enjoy the EPCOT Experience, and watch the colorful projection light show on this 3D model of the Pavilions of World Showcase. While there wasn’t anything new or missing in the Experience, we always enjoy taking photographs here.

Just outside in the lobby, a fresh queue was set up at the Eats at the EPCOT Experience booth. We were told that the booth would be serving snack foods starting sometime next week. We’re excited to see what they will have to offer!

Next, we headed to the Norway Pavilion where we found these amazing new Viking Mickey ears. We are loving all the new ears recently! So many styles to choose from, and now with each of the countries seemingly getting their own set of ears, it just makes you want to get one of each!

As we continued around World Showcase, we noticed a new menu item at the Italy booth for Taste of EPCOT International Food & Wine Festival 2020, the Italian Margarita has returned. Made with Limmoncello and Tequila, this large frozen drink does give you a good amount for the price, despite the price increase from $10 to $11 from last year.

In the France Pavilion we found new additions to the Macaron merchandise collection, including this fun “hidden” Mickey tumbler. In addition to the popular not one, but two new sets of ears that recently debuted in the France Pavilion, two large merchandise lines were also released, one of which features these colorful classic treats. For more pictures and information, see our article here.

We found Jasmine looking strong and beautiful as ever on the Princess Promenade as it made its way around World Showcase. We love seeing their smiling faces!

We came across some pin trading at Pin Traders today, and were interested to see how the social distancing worked. You can pick off of the pin board, but the Cast Member will hand you your choice. You then drop the pin you’re trading into a small dish, usually themed to the location, where it is then sanitized before being put on the pin board.

The scrim wall was pulled back at the construction site for Guardians of the Galaxy: Cosmic Rewind, revealing a bit of the interior of the building. Unfortunately, nothing too exciting was visible, but at least we know they’re working on it!

The upper screens at Project Tomorrow were on today, although everything else remained turned off. In an effort to reduce touch points between guests, most interactive consoles such as the ones contained in Project Tomorrow are temporarily unavailable.

Around midday, both Soarin’ Around The World and Living With The Land had 10 minute wait times posted. Many attractions’ wait times never went above 30 minutes all day.

In the World ShowPlace Events Pavilion, Carol “the Piano Lady” was entertaining guests with beautiful renditions of classic Disney tunes. It’s such a treat to hear her play!

The butterfly garden that had been installed for the EPCOT International Flower & Garden Festival 2020 and had then been left in place after the reopening has been removed. The netting that enclosed the garden in order to protect and contain the butterflies was removed prior to the reopening of the park, but all of the plants and decorations were left and rolling planters were used to block the area from guests. All of those plants have been removed and sod has been put down.

The front doors of the both Port of Entry and Disney Traders had been marked as exit only doors until recently. Now these doors bear no markings at all, and guests are allowed to use these doors for either exit or entry. The side doors in both shops are marked and are being used as either exit only or entrance only.

We found a late comer to the new merchandise line for the Canada Pavilion, this fun maple leaf shirt for ladies. With a high-low hem and a soft jersey feel, we love this “hidden Mickey” shirt.

We had a great day at EPCOT, we hope you enjoyed coming along with us. Have a magical day!

PHOTOS: Eats at the EPCOT Experience Expected to Reopen Next Week; Preparations Underway