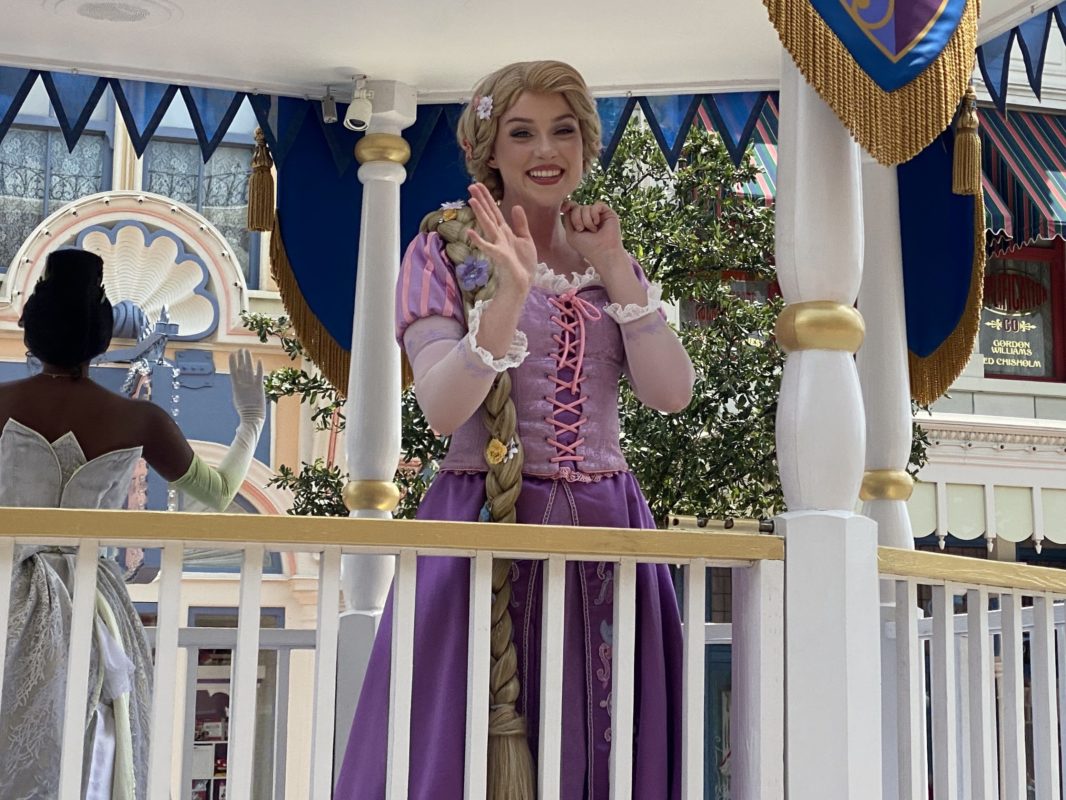 With the threat of Hurricane Isaias just passing us by, we were excited to get out and enjoy a day at the parks. It was a relatively quiet day, but we still saw lots of fun things. Let’s get started!

Recently, we’ve been told to come back to the parking gate at 30 minutes before park opening, although we’ve been let in to park consistently earlier than that. Today, in a refreshing return to the original routine in place from park reopening in mid July, we were told to return 60 minutes prior to opening, that we would be allowed to line up then, and that we would be allowed in to park 45 minutes prior to park opening. True to their word and to the minute, they were right on time!

A bit of drama unfolded at the Express Monorail as we were first loaded and then unloaded onto not one but two monorails before being told to exit to another form of transportation to the Magic Kingdom.

Another monorail was temporarily broken down on the line within sight of the Transportation and Ticket Center, and Cast Members would not load another monorail in order to keep the line clear. The stranded monorail was fixed quickly, and within about 30 minutes the Express line was up and running again.

The popular attraction opened to guests around 9:30am, and after a brief delay with guests on board, ran smoothly for the remainder of the day.

We checked in at Splashdown Photos for Splash Mountain merchandise, but were disappointed to find only standard park merchandise in stock.

Over at the Tomorrowland Transit Authority PeopleMover the “not operating at this time” sign has been switched out for the “not operating today” sign, giving guests a bit more of a firm idea that the classic attraction will be unavailable long term.

In the moat surrounding Cinderella Castle, the scrim wall that had been hung from the bridge hiding the legs, and construction supplies stored there, from view, is still stowed away with the supplies safely packed up. We also noticed the pumps on this side have either been turned off or have not been running as efficiently, as water has started to seep back in a bit.

We found a new magnet at the Dtech on Demand kiosk at the Tomorrowland Light and Power Co celebrating the 2020 MLS Is Back Tournament.

Work was actively underway at the construction site for Tron Lightcycle Power Run. Our view has been limited recently, but we caught a glimpse of the site today.

Most of the work was being done inside of the building, making for interesting noises, but less interesting pictures.

One of our favorite treats in the park was absent from the menu at Storybook Treats, but has made a triumphant return recently. Although it had a slight price increase, nothing could stop us from enjoying this delicious Peter Pan Float. For more pictures and information, see our article here.

Over at the Plaza del Sol Caribe Bazaar, the exit shop for Pirates of the Caribbean, a mysterious box has appeared outside. We’re unsure what work is being done here, but we’ll keep an eye on it.

We found these adorable Mickey Pumpkin earrings and necklace at Arribas Brothers on Main Street, USA and were tasting the pumpkin spice already. We are so ready for fall! We recently heard that Main Street USA will be decorated for Halloween despite Mickey’s Not So Scary Halloween Party being canceled, although no one knows when the decorations will arrive. We can’t wait to see the classic fall decorations line the street!

We got to wave hello to one of our favorite princesses, Rapunzel, as she rode by on the Royal Princess Processional today. The Character Cavalcades are a great way to see some of your favorite characters while maintaining a safe social distance.

We had a great day at the Magic Kingdom, we hope you enjoyed coming along with us. Have a magical day!