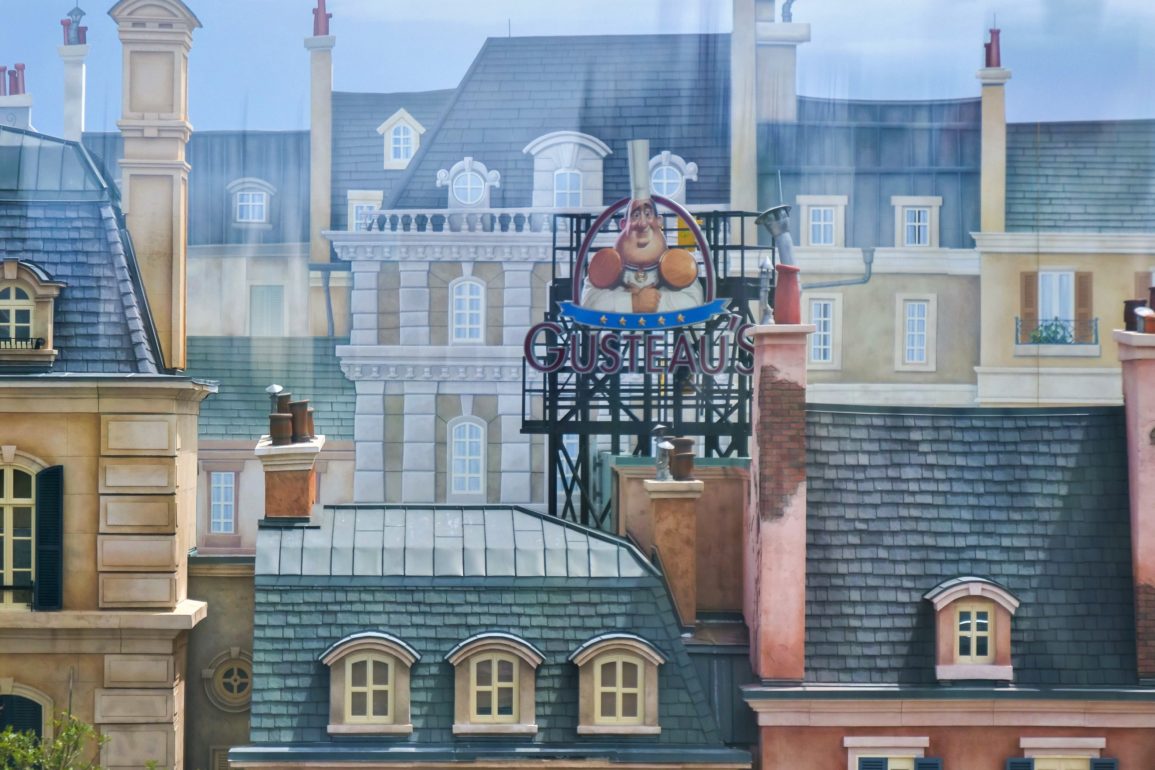 As we sit just over three weeks away from the end of summer, we are also approaching the end of the window that was announced for the opening of one of EPCOT’s largest projects — the expansion of the France Pavilion and Remy’s Ratatouille Adventure, a clone of the ‘Rat-traction’ which already exists at Walt Disney Studios in Disneyland Paris. While the delay is certainly understandable, that doesn’t make the expansion — and its additional capacity — highly desired. Let’s take a look at how this new area is progressing.

First taking a look at what will be the entrance to the expansion, the area appears nearly done, with the archway, pathway, and trees all appearing to be complete. From this view, only some minor landscaping remains.

In this small area next to the restrooms, a lamppost, along with spools of wiring, lay on the ground awaiting installation. Most of the lighting elements have long been installed, but this particular one still awaits placement.

Heading towards the crossroads of the area, there’s a little more activity to be seen. A handful of trashcans line the streets as smaller details are completed on the adjacent buildings. Like the entryway, small bits of landscaping and some exterior details are the extent of the remaining work.

A bit further along, the structure that will house La Creperie de Paris, the expansion’s lone eatery, additional materials are strewn about, and we can also see that some painting details have yet to be completed on the building.

Down the Parisian street which will lead to Remy’s Ratatouille Adventure, two lifts surround Remy’s Courtyard fountain. These lifts are necessary as smaller details are added to the multi-story buildings which line these streets in this portion of the area.

Heading to the heart of the expanded pavilion, recent work has added balcony railings and shutter details, as well as aging accents to give the area an authentic Parisian feel. Ironwork adorns the nearby service gate, furthering that authenticity.

While the Gusteau’s sign was added well before the park closed due to COVID-19 concerns, one of the largest elements we’re still awaiting is the sign for Remy’s Ratatouille Adventure itself.

Finally, viewing the expansion from the backside, a third lift looms for use as theming is added to the outside of the show building. This portion of the structure that is visible from within the park is having aging details added, and still awaits elements such as shutters to give it a more realistic feel.

Are you excited about the progress being made on the France Pavilion Expansion, or simply looking forward to the eventual opening of Remy’s Ratatouille Adventure? Let us know in the comments!

Previous
PHOTOS: Keep Your Tootsies Toasty with these New Baby Yoda “The Child” Socks from Downtown Disney at Disneyland Resort