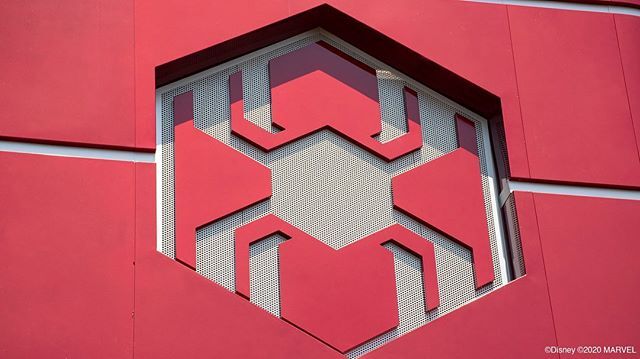 PHOTOS: W.E.B. Insignia Installed for WEB SLINGERS: A Spider-Man Adventure (and More of the Quinjet) at Avengers Campus in Disney California Adventure

While the Disneyland Resort remains closed to the public, some might want to give up on construction. But not them.

Walt Disney Imagineering recently shared more pictures of the work going on at Avengers Campus in Disney California Adventure on their Instagram account, including the installation of the Quinjet. Above, you can see concept art of the Avengers’ main mode of transportation (at least for the ones that can’t fly).

They also provided a birds-eye view (or Hawkeye view, if you prefer) of the aircraft as it was being lowered into place on top of Avengers Headquarters. Recently, Chairman of Disney Parks Josh D’Amaro shared pictures of the Quinjet from his visit with President of Disneyland Resort, Ken Potrock and Marvel Studios head Kevin Feige.

The crew assembled for a triumphant picture. Truly, they’re the super heroes of the project.

Meanwhile, they also shared that the Worldwide Engineering Brigade (W.E.B.) insignia has been installed on the show building for WEB SLINGERS: A Spider-Man Adventure.

Avengers Campus was originally scheduled to open July 18th, but has since been delayed due to the park’s extended closure. But much like the Avengers themselves, when things go dark, they press on for a brighter future. As the great Stan Lee put it, ’nuff said!