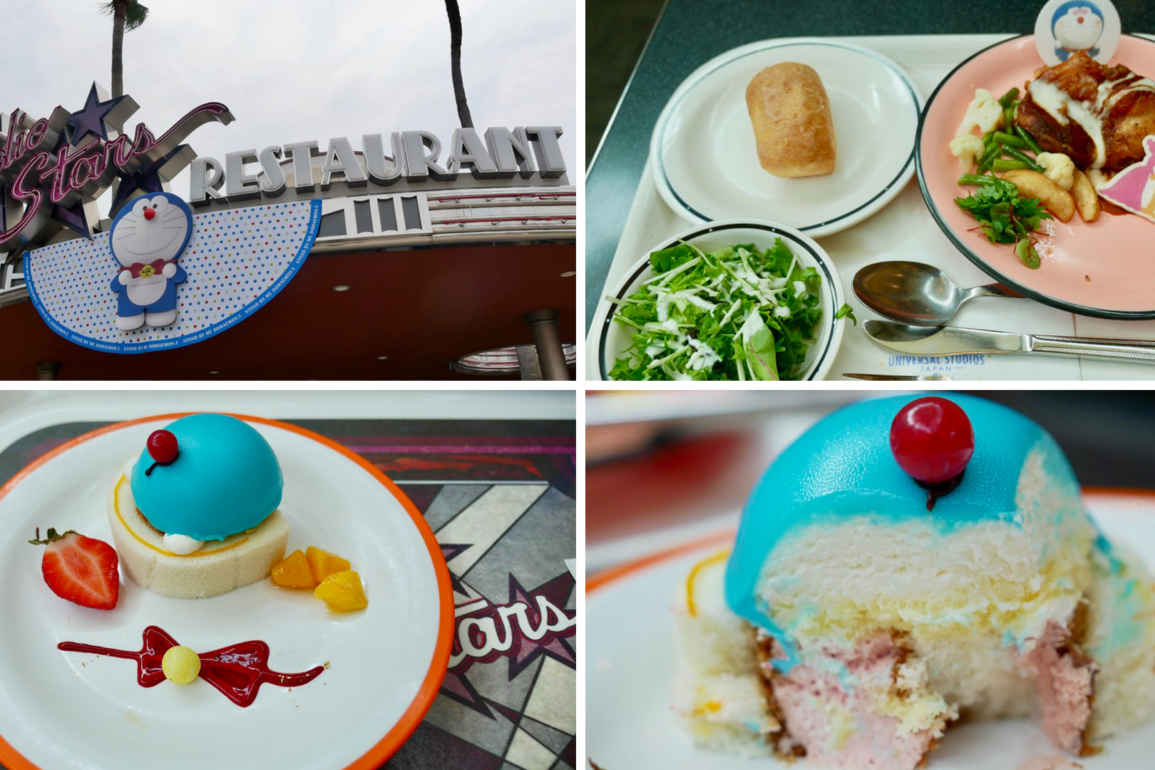 With Universal Studios Japan taking part in celebrating the 50th anniversary of beloved Japanese children’s character Doraemon with a new XR ride and other merchandise lines, it only makes sense that there’s food to match the occasion as well! So right after our third or fourth ride on the STAND BY ME Doraemon 2 XR Ride, we took a stroll across the street to the Studio Stars Restaurant in Universal Studios Japan’s Hollywood area for a lunch break. And the results were fairly mixed.

Since the lovable blue robot cat from the 22nd century has taken over the headline menu items, it only makes sense that the same motif is followed around the restaurant. The sign in front of the door features Doraemon on a banner, and the front door resembles his neck and chest, complete with bowtie and bell above the door.

Each side of the restaurant features two of the series’ main human characters along with bubbles that depict some of Doraemon’s gadgets. This side features Nobita (known as Noby in the English dub) on the left, and Shizuka (Sue in English) on the right.

On the right side of the door, we see Gian (known as Big G in English) and Suneo (or Sneetch).

Inside, there’s a number of choices for Doraemon – a kids meal and two delicious desserts are on offer, as well as an adult plate. If Doraemon’s adorable face doesn’t convince you, there are also a few other meal choices. But, why come here right now if you’re not getting the Doraemon food?

If you’re having trouble choosing one of the two cute desserts, you can get a look at some plastic models close to the register. But enough of this already, let’s get to the food!

The Doraemon plate comes with a roast chicken, a side of potatoes and other vegetables, a salad, bread, and a soft drink.

Before we dive into the actual tastes, let me talk about my frustration with dining here. Almost everyone in line ordered the Doraemon Plate, the same as me. Problem is, it was being served highly inconsistently. Some people ended up with full plates, some ended up with nearly a third empty, like mine. For a meal that costs nearly $20, I expect at the very least some consistency. No other restaurant I observed at Universal Studios Japan had this problem, and in fact, the park has a (normally rather justified) reputation for the best theme park food in Japan. But the way this set was served irked me quite a bit.

So let’s talk about the main plate first. The silhouettes of Nobita and Shizuka, as well as Doraemon making heart eyes, are both inedible foam, sadly. It would’ve been cool if they were cheese or something, but I get it. The main attraction here is the roast chicken, which I found was actually kind of dry. I’ll grant that this is a buffeteria and your experience depends on how long the chicken has been sitting out, but I was served from a fairly full tray, so maybe the chicken was just overdone a bit. The demi-glace sauce helped save it, though. If the chicken was less dry, I would’ve really enjoyed this one.

As for the vegetables on the side, I particularly enjoyed the tomato/bell pepper mix on the right, with the bell peppers retaining their juiciness even after cooking. The potatoes were fine save for a lack of salt. I later discovered that any restaurant will provide salt and pepper if you flag down a Crew Member, but I wish I’d known that here. The greens and cauliflower aren’t fresh by any means, but they aren’t mushy either, so I’ll give them a pass for effort.

Be forewarned—butter is not provided with the bread. But there’s nothing particularly special or disappointing about it either. It’s just bread.

The salad tasted a lot more fresh and crispy than the greens on the main plate. The dressing was minimal but welcomed, especially considering the lack of variety in the salad itself.

Also, drinks at the restaurant are served in this absolutely adorable drink cup! Seriously, isn’t Doraemon the cutest robot cat?

By far a spectacular end to an otherwise disappointing meal, the Doraemon in the Pass Loop cake is essentially a Doraemon butt mousse cake. But an adorable mousse cake nonetheless! Aside from the cake itself, there’s also a strawberry and mango garnish, and a raspberry icing bow garnish with a lemon puff for his bell.

Inside, the Doraemon butt mousse is filled with pineapple mousse, while the Pass Hoop cake has a very slight but recognizable cherry flavor, with a fluffy sponge cake around it. Putting the two together compliments the flavors, rather than clashing. The mango and strawberry garnishes were both excellent as well, with the strawberry in particular tasting rather fresh. And that little tail on top of the cake? It’s a piece of boba filled with a very, very tart raspberry juice.

All in all, I enjoyed the dessert much more than the actual meal. Even if you’re a Doraemon fan, I recommend you eat lunch somewhere else and then come for the sweet and delicious dessert treats! All of these items, and more, are available at the Studio Stars Restaurant in Universal Studios Japan’s Hollywood area for an undetermined period, so get out your Anywhere Doors and be sure to stop at Studio Stars for dessert!