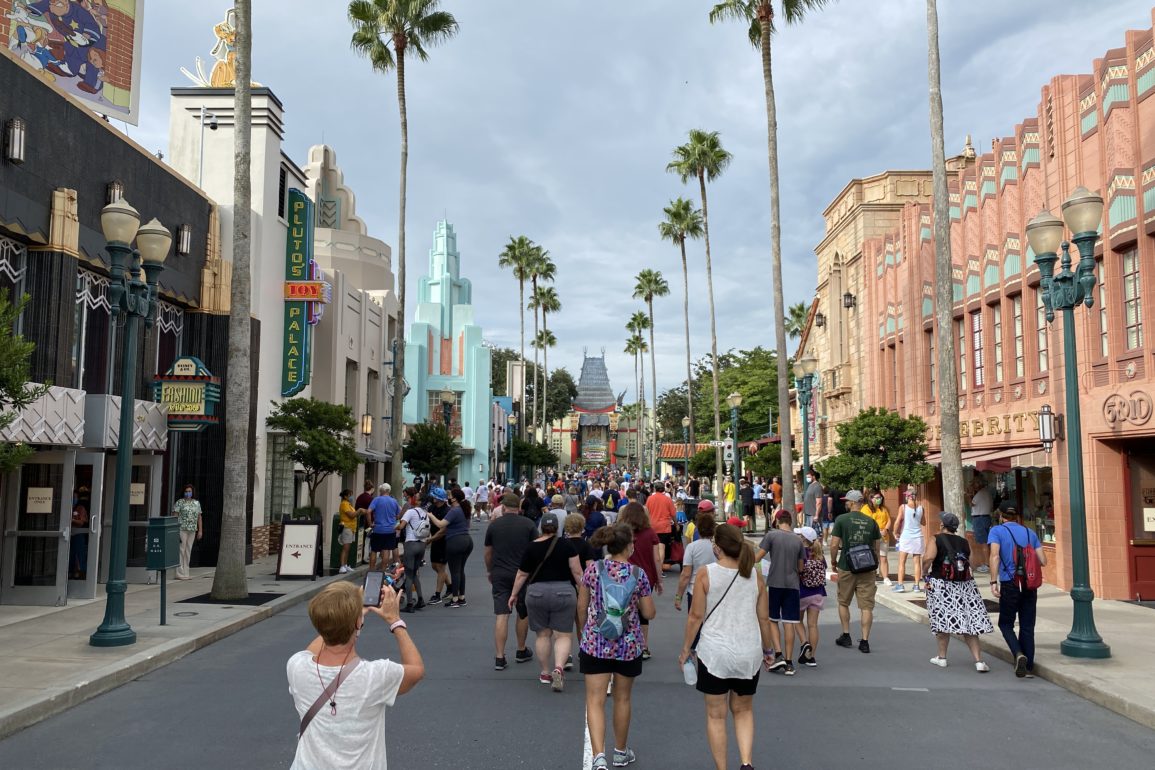 Hello from a hot and humid Disney’s Hollywood Studios! Just when we thought it might cool off a little bit, that heat sneaked up on us again. With Disney’s Halloween season officially upon us, we were ready for cooler weather, but we’ll have to settle for eating and drinking cold treats. (Have you seen this new Oogie Boogie Worm ‘n’ Dirt Sundae? It has green whipped cream!) But we digress. On to our fun-filled day at this classic park!

Across the street at Sunset Boulevard, which has not been open since the reopening of the park, new “Closed” signs have been installed.

Directions on where to go to find similar merchandise are now printed alongside the “Sorry, We Are Closed” text. We found these new signs on almost every closed store in Disney’s Hollywood Studios.

At The Darkroom, we found a pretty good selection of Limited Edition pieces, including all of the new Halloween pins that were released.

Next door at the 5&10, we found this adorable new “Mine!” tumbler featuring the seagulls from Finding Nemo.

We just love the trio on top! They are all ready to tell you whose drink this is. This tumbler retails for $19.99.

Across the street at Mickey’s of Hollywood we found this awesome Orange Bird fan. We think this is the ultimate way for Floridians to beat the heat, don’t you? The fan is $9.99.

We took a break from merchandise hunting to try to secure a Boarding Group for Star Wars: Rise of the Resistance during the first Boarding Group release at 10 AM. Sadly, our MyDisneyExperience app glitched and caused us to miss getting a group. We noticed that the line for the Guest Experience Team was a bit longer than normal today just after 10 AM, so we may not have been the only ones to experience a glitch.

Not getting a Boarding Group turned out to be a blessing in disguise, as Star Wars: Rise of the Resistance spent more time down than up throughout the morning and early afternoon. By 2 PM, the attraction had reached Boarding Group 32. During normal operation, the ride usually reaches into groups in the 50s or 60s by that time. Things were not going so well today. We ended up receiving Backup Boarding Group 76, but we never received a push notification that our group was called.

Speaking of long lines, the line for Twilight Zone Tower of Terror reached new heights today. Guests were directed into the queue for the Hollywood Hills Amphitheater, home to the temporarily unavailable Fantasmic! nighttime spectacular, rather than snaking the line down Sunset Boulevard.

Social distancing markers have been installed throughout the queue, allowing a large amount of people to queue here comfortably. The line utilizes the two outer lanes, leaving the center lane blocked off to distance guests.

Going back to merch, we found three new shirts today. The first of which was this grey cutoff women’s shirt featuring Minnie Mouse.

The second is this turquoise cutoff women’s shirt featuring Daisy. We are loving these retro vibes! Both of these shirts were found at Legends of Hollywood and retail for $29.99 each.

The last shirt was this unisex blue T-shirt featuring the Mandolorian’s helmet with the words “The Mando” printed above it. This shirt matches the youth shirt we found a little while ago that features “The Child.”

The highlight of our day was finding this new shoulder pet Porg. The best part about him is that he talks! We couldn’t believe our ears, but he gave us quite the ear-full.

It was a busy day here at Disney’s Hollywood Studios. We were surprised with the crowd level for a weekday. Still, we had a wonderful day, and we hope you enjoyed coming along with us. Have a magical day!