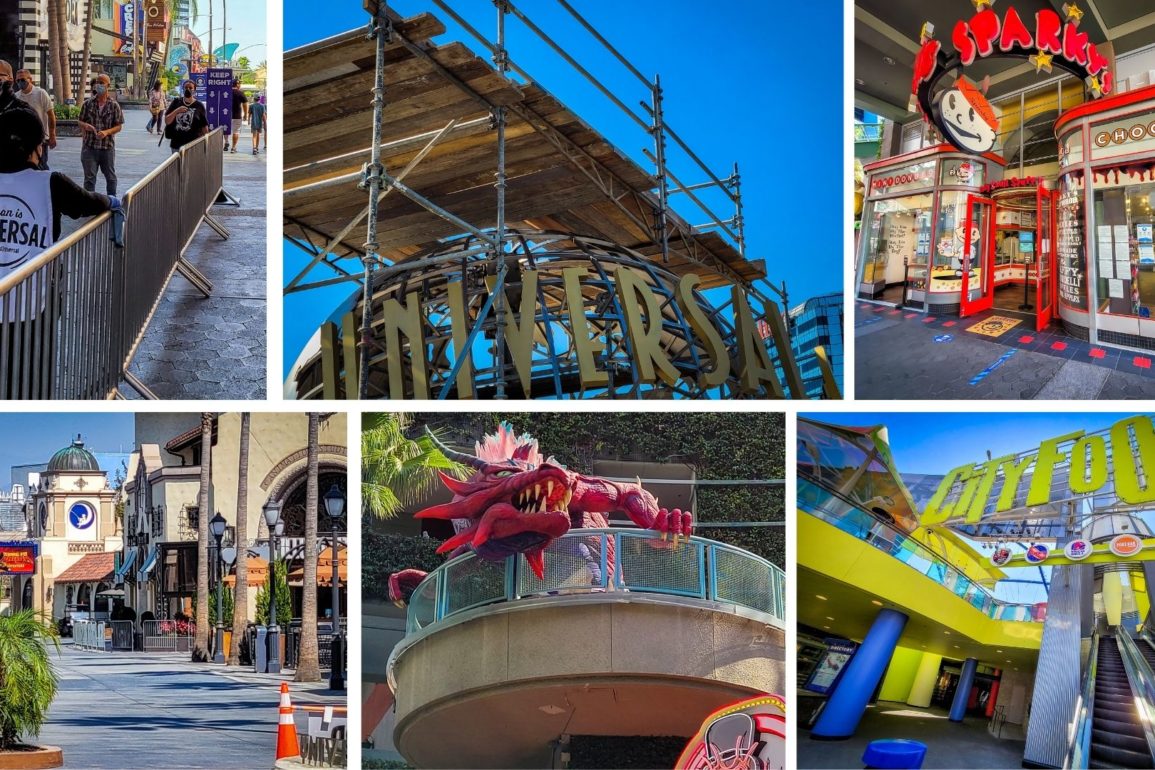 Welcome to Hollywood! We’re back at Universal CityWalk Hollywood for a look at what’s new, what’s good, and what’s happening. Temperatures are cooling off, and guests are flocking back to CityWalk. That’s both a good and a bad thing — good for the businesses to recover and start offering more, but bad for the wait times to get into some shops. So let’s dive right into this photo report!

Heading West to the Park Gates

Jamba Juice has reopened again. They had reopened, then reclosed, now open again. Crowd size likely factors into a lot of the businesses’ decision making and now that it’s getting busy again with more pleasant weather, it’s sure to entice more businesses to open.

A new feature installed since our last trip is the installation of walkway barriers. These metal stanchions separate flow in one of the tight bottleneck areas to help keep social distance between guests.

The Los Angeles Sock Market has finally reopened. It has been closed throughout the pandemic and the area in front of its doors was used for seating and for queue area while it was closed.

The intense crowds lead to long wait times to enter some of the bigger shops, like the Universal Studio Store. With a doubleback turn and guests spilling out of the line and into the walkway, this was no short wait to enter the store. Upon entering, we didn’t see any new merchandise than what had been there weeks before so this was just a line due to crowds and not a new merch release.

While the theme park remains closed, guidelines for reopening could be announced any time now. A plan was in place to release the guidelines last week, but then it was postponed due to California theme parks pushing back on the stringency of the guidelines.

The iconic Universal Globe in the entrance forecourt is undergoing some refurbishments. It has been surrounded in scaffolding as it is being serviced. A Team Member told us that the nature of the work is routine, but didn’t have any specifics on what was being done.

Approaching the massive entry gate, we can take a look inside the park.

Last month, we noticed some signage placed around the main entryway denoting entrances and exits to shops, as well as reminders to wear masks. Some of these seem to be missing now, but there are other signs of life inside.

Stanchion gates have been placed outside the Illumination Store, the same as the line outside the Universal Studio Store in CityWalk. Team Members must be expecting a wait to enter the store and are preparing before the reopening.

We now head East, back to the cul-de-sac to see the rest.

Production Central has been a great new store for the last few months since opening and it always has some fun merch.

This cool new Universal Studios windbreaker is part of the retro collection. It is nice and thin, so you don’t retain too much heat but still cut the wind whipping through.

This retro cropped T-shirt is perfectly 90’s. Pair this with some jean overall shorts and a flannel, and you can fit right in. The striped shirt is white with bright pink, green, blue and yellow stripes that match the rest of the retro collection.

Being October, Production Central is a better shop than ever because it is the Universal Monsters headquarters. With apparel, accessories and collectibles featuring your favorite Monsters, this is your best spooky destination at CityWalk.

Get Halloween ready with some cool replica merch, like this reproduction of Dracula’s medallion, which Bela Lugosi wore as a necklace in the 1931 film.

Sparky’s has finally reopened its doors and we couldn’t be more excited.

This candy shop features not only imported sweets and domestic favorites alike, but also makes their own chocolates.

And, of course, the Mini-Donut window serves from counters both inside and out. You can get a tub of fried dough — literally, this souvenir bathtub full of donuts — to go.

NBC Sports Grill and Brew is still closed but some activity is taking place inside.

It seems that the shelves are being stocked and hopefully preparing to open soon. Boxes line the inside and cardboard trackways are laid down for workers and carts to preserve the floors.

The dragon marks the home stretch to CityWalk, as we head to the less crowded end of the walk.

The majority of businesses down this way remain closed, except for the quick counter service places and shops.

Cinnabon has finally reopened. It’s surprising they hadn’t opened sooner as the counter service location shouldn’t be impacted by the prohibition on indoor dining. And the abundance of added outdoor seating seemed to be a big win for businesses like this.

We’re glad to have them back open again, and serving up cinnamon everything. This new cinnamon cold brew is pretty tasty on a hot afternoon.

Heading up to CityFood dining terrace, we see more of the same as last we checked.

The paper window coverings have come down showing that everything but the mounted fixtures has been removed.

The Habit and Poke Bar are both still closed, with no signs of life inside for construction activity. It’s still unsure when these will be worked on again, as things seem to be getting back to work everywhere but in the construction sites of CityWalk.

Thanks for joining us on this photo report from Universal CityWalk Hollywood. Want to see something we missed? Let us know in the comments below.

Previous
PHOTOS: New “Jaws” and “Back to the Future” Baseball Caps Arrive at Universal Studios Florida