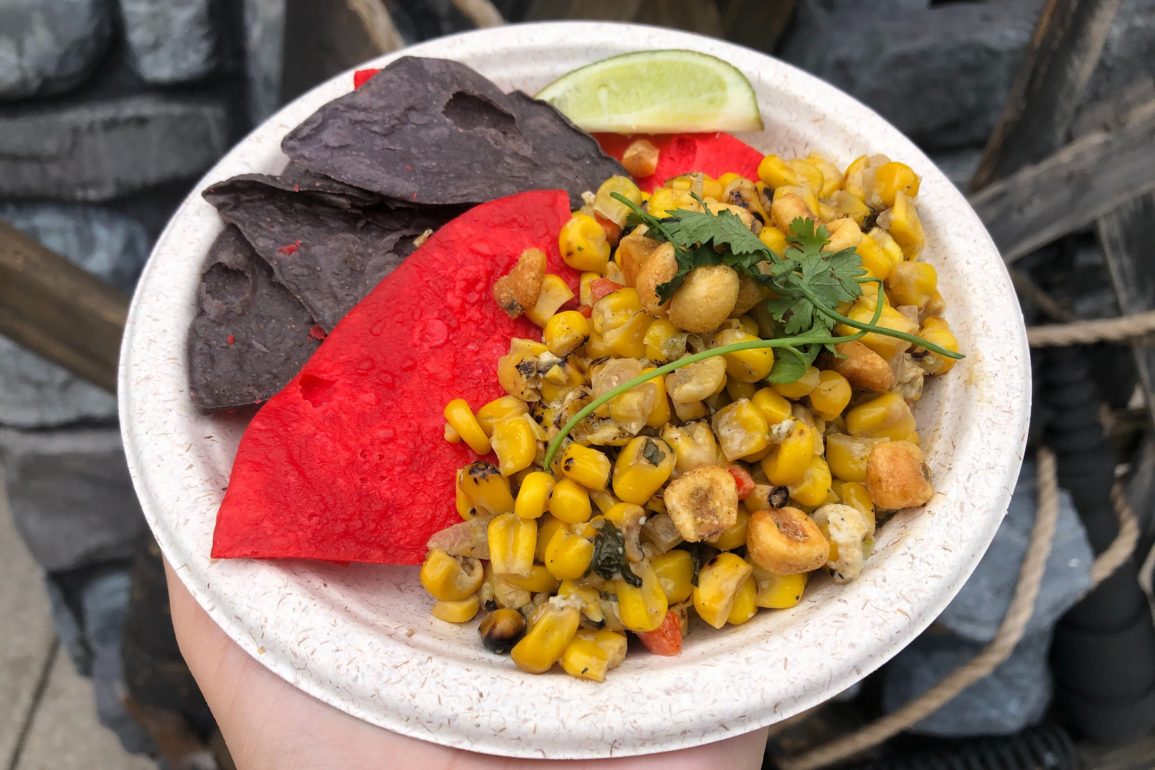 Universal Studios Florida has been serving up some new, specialty Halloween treats in honor of the two haunted houses that are now open daily. There are already some sweet treats themed to the houses, but now we’ve come across a new savory option from the Halloween Horror Nights food truck near the Tonight Shop. In an effort to give guests a variety, Universal has been switching the menu up occasionally, with each weekend getting better. The Stolen Teeth Street Corn has replaced the Cheese Curd Brains, which took the place of the original Electrofried Skin and Guts.

The plate is served with a mound of street corn mixture and a few red and blue tortilla chips. The portion of corn looks great, but we’re skeptical on the amount of chips served on the side. We’re going to have to ration this out.

The street corn has noticeable peppers, onions, and cotija cheese, but it really doesn’t have much sauce. Crispy corn pieces are mixed in with the fresh corn, giving the dip a nice, unexpected crunch with each bite. This was the highlight of the dish and what sealed the deal for us. The chips were fresh, too, making this an all around winner.

When we finally ran out of chips, we wish we had a fork, so we would suggest grabbing a set of utensils before you leave the truck. It can be really difficult to find a fork when the park is crowded and you can’t get near any of the restaurants.

This is by far the best offering that has come from this food truck, so we hope it sticks around for a while. Our only complaint is that it basically shares the same themed name as the Stolen Teeth Tart from the Tribute Store. It’s nice to see new additions to the menus here in the parks, so we’re excited to see if the food truck has any more new offerings in store for us this month. Will you be heading over to the Universal Studios Florida to try the new Stolen Teeth Street Corn?