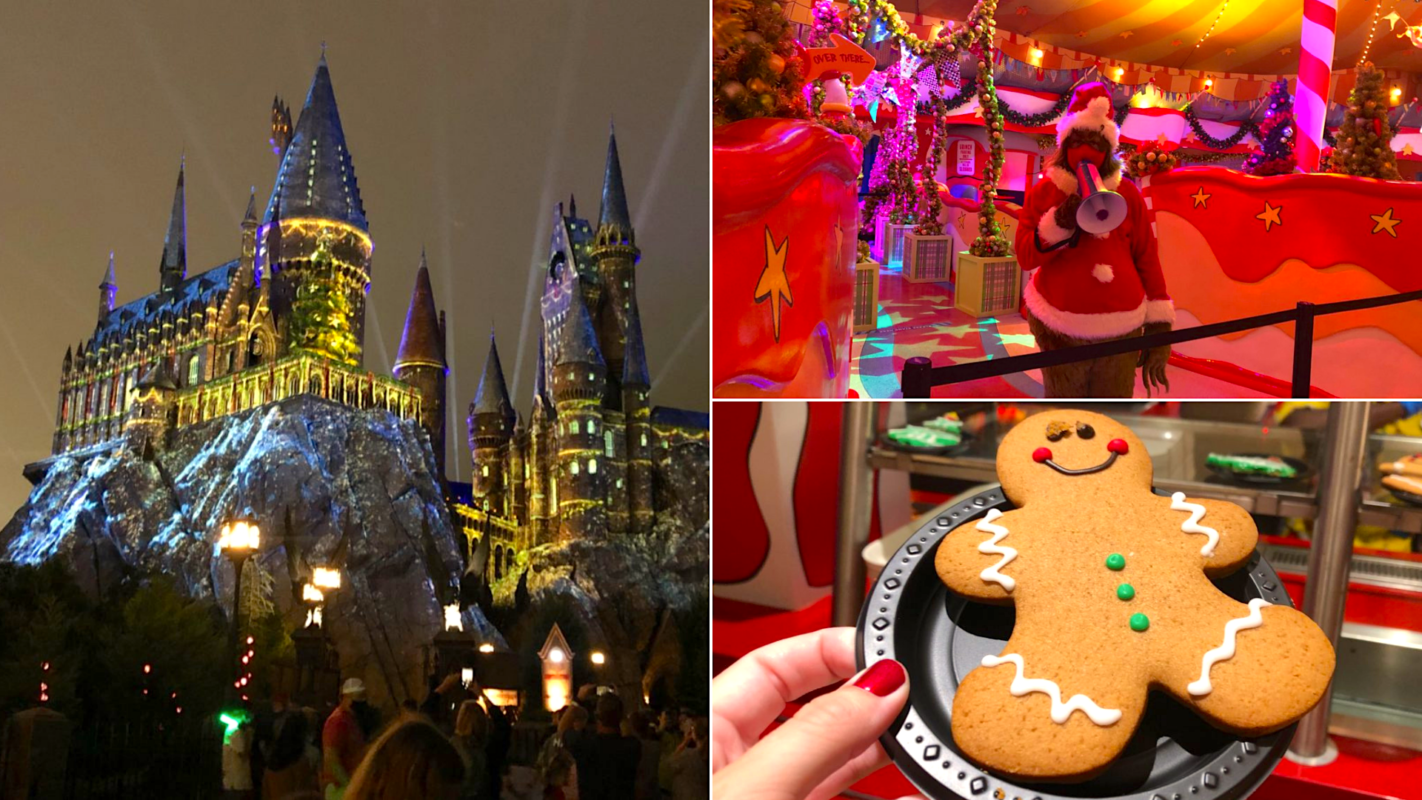 Season’s greetings from the Universal Orlando Resort! The resort has been spreading lots of cheer this year by offering a variety of fun and unique holiday events, with some slight modifications, of course. The Universal Holiday Tour is a new experience that is available on select nights now through January 3.

Check-in is outside the gates of Universal Studios Florida, and you’ll most likely spot Team Members waving red and green light wands near a small “check in” sign. We were in the park before the tour started, but had to exit the park to get in line. Even though there were a lot of people in line waiting to check in, things moved quickly.

Once we gave our name and confirmation number, we received wristbands to show that we were part of the tour. Next, we had our park tickets scanned once for Universal Studios Florida and again for Islands of Adventure. Valid park-to-park admission is required to take part in the tour since you will be traveling between both parks on the tour.

Once we were ready, we were put in a small group with a couple other families and our tour guide. We were told that groups can be up to 12 people, with one guide, and there were approximately 13 groups participating in the tour. Because there are multiple groups traveling around the park at the same time, tour structure will vary from group to group. Each tour guide had a different schedule with times and locations to avoid running into each other during the night. Our guide was excited to take us on the new tour and started our night in Hollywood.

The tour started around 8 PM with the park closing at 10 PM, and would last over 3 hours. This was the very first night this tour was offered, so we knew there might be a few bumps along the way as the guides figure out what works and what doesn’t. The one thing we noticed was there seemed to be a lot of “filler” time. We were given time to take photos around the Hollywood area with the Christmas decorations. For someone like myself who comes to the park frequently, this wasn’t important to me, but other families on the tour were taking full advantage of the opportunity. We slowly made our way through the park towards the Universal Holiday Experience featuring Macy’s Balloons.

Our guide had told us that we could stop for restrooms breaks or snacks along the way if we wanted, and a few people on our tour wanted to grab drinks. The group stopped and waited for a couple of people to go through the line and get their drinks before we went to see the Macy’s Balloons. Our guide gave us some history on the Macy’s Parade and the balloons, all of which was new information to me. Hopefully the guides can expand on this portion of the tour, because we love hearing all the details!

For our group, it seemed like most of the guests had not yet been through the Macy’s balloons walkthrough. Again, as someone who is here almost every day, this wasn’t anything different or unique, and if anything, it was disappointing to see just how few characters were in the building. We were greeted by one person at the entrance, but there were no other characters aside from Santa. If there had been more characters during the evening, it might have filled up some of the time. A few guests from our group took the opportunity to meet Santa before we headed back outside and back to the drink stand. At this point, we were starting to get bored, but that wouldn’t last long.

Our next stop was Seuss Landing to meet the Grinch. We were taken through a backstage route to get to Islands of Adventure quickly and easily. Here’s where the night starts to get a lot better.

Circus McGurkus Cafe Stoo-pendus is fully decorated for Christmas and looks amazing. As you enter, you’ll find the Grinch causing mischief with his megaphone. He’s got his own space to roam in the center, which allows him to interact with guests on each side of the restaurant, as well as shouting at the “Wholigans” riding by on the High in the Sky Seuss Trolley Train Ride. We’re definitely gonna be hitting up the Sky Trolley on tour nights just to watch the action.

Each family is taken to their own table in the restaurant, which had a surprise of Wizarding World postcards. Each postcard was stamped with the exclusive stamps from Hogsmeade and would later receive a postmark from the Owl Post. We suggest you come prepared with an address of a friend or family member who would enjoy receiving a postcard from the Wizarding World, because this is a fun treat to receive. Or just send one to yourself!

We had considered having a few snacks around the park before the tour, but we’re glad we waited.

While hanging with the Grinch, you’ll be able to help yourself to unlimited cookies and hot chocolate. And we’re not taking pre-packaged cookies, either. These are freshly made and amazing. There’s a cookie station where you can grab a gingerbread man, frosted snowman sugar cookie, or frosted Christmas tree sugar cookies. Or all 3! This was one of the highlights of the tour for us. There are prepackaged, gluten-free cookies available by request.

There’s also a hot chocolate station and the Team Member can customize your drink with peppermint or cinnamon flavoring. You can even get candy canes, chocolate shavings, or marshmallows added, too!

Honestly, you could have left us in here all night with cookies and the Grinch and we’d have been happy. If you haven’t gotten to meet the Grinch, this is the best way to get a lot of one-on-one time with him. We had a lot of laughs just chatting with him and got tons of photos and even a few personalized video messages for our friends. There’s plenty of time to hang out and with so few people on the tour, you get a very unique experience.

The beginning of the tour felt like it dragged a bit, but now that we were full of cookies and hot cocoa, and had gotten plenty of time with the Grinch, we were feeling much better. We took the backstage path back to Universal Studios Florida for a visit to the Holiday Tribute Store. The nice thing about this tour is that the guides give you time to explore on your own. Once our guide gave us all the details on the Holiday Tribute Store and Earl the Squirrel, we were allowed to go off and check out the store or take in a ride quickly. Revenge of the Mummy and Finnegan’s are both close by if you’d rather skip the Tribute Store. We had a meet-up time of 10 PM, and the Cinematic Spectacular started at 9:45 PM, so we saw some fireworks while we were in the area.

Now that the park was officially closed, we crossed back over to Islands of Adventure where we were allowed to hang out in Seuss Landing and take some photos while we waited for Hogsmeade to be cleared of day guests. It didn’t take too long, thankfully. Traveling through the quiet, empty theme park on the way to the Wizarding World is an experience a lot of people don’t get.

Hogsmeade, finally! Once we made it to the Wizarding World of Harry Potter, guests were allowed to wander the village and take photos. At this point, you can drop off your postcards and pick up your “gift” from the Owl Post. We jumped in line right away and it seemed like everyone followed. The line got long quickly, but we mailed our postcards and picked up our gift without much wait.

We were given a Hogwarts ornament for our gift. It’s a really nice ornament, but it isn’t unique to the event and can also be purchased in the gift shops for $18.95. Honestly, we expected the “gift” to be something simple like a printed out photo, so the ornament is a very nice keepsake. We’ve been accumulating a lot of Universal Studios ornaments lately for our Christmas tree and this will be a nice addition to our collection.

Each tour group has a preassigned spot around the castle for the showing of the Magic of Christmas at Hogwarts Castle, so there’s no need to rush or get in line for a good spot. Your area has been predetermined, so just relax and take in the quiet night atmosphere around Hogsmeade while you wait.

Finally, around 11 PM, tour guides began to gather their groups and lead them to the viewing area in front of the castle. There really isn’t a bad spot anywhere and with so few people, you’re going to have a great view no matter where your group is placed. Interestingly, many people chose to sit down for the show, making our view even better.

The show was magical and we had an unforgettable time thanks to the very small number of guests in the area. Nobody was talking, nobody was moving around, and everyone was just there to enjoy the show. This really is your own private viewing of the Magic of Christmas at Hogwarts Castle. This would be a great gift to give someone who loves the Wizarding World during the holidays.

After the show, you will also have a chance to take some photos of the castle before your guide escorts you out of the park.

Overall, this tour really does offer a great value for the price. Even if you’ve been to the park and experienced some of the holiday offerings, having hot chocolate and cookies with the Grinch and a private showing of the full Magic of Christmas at Hogwarts Castle show is well worth it. We think it could have been just a little shorter, but we would gladly go on the tour again, even if it was only to see the show and hang with the Grinch. The ornament and postcards were a nice touch, too, and added even more value to the cost of the tour. If you’re a fan of Harry Potter, the private viewing of the Hogwarts Castle show is absolutely perfect. You can watch the full video below.

1 thought on “PHOTOS, VIDEO, REVIEW: The NEW Universal Holiday Tour is a Great Value – Hang Out With The Grinch, Eat Unlimited Christmas Cookies, and Get a Private Viewing of “The Magic of Christmas at Hogwarts Castle” Show”