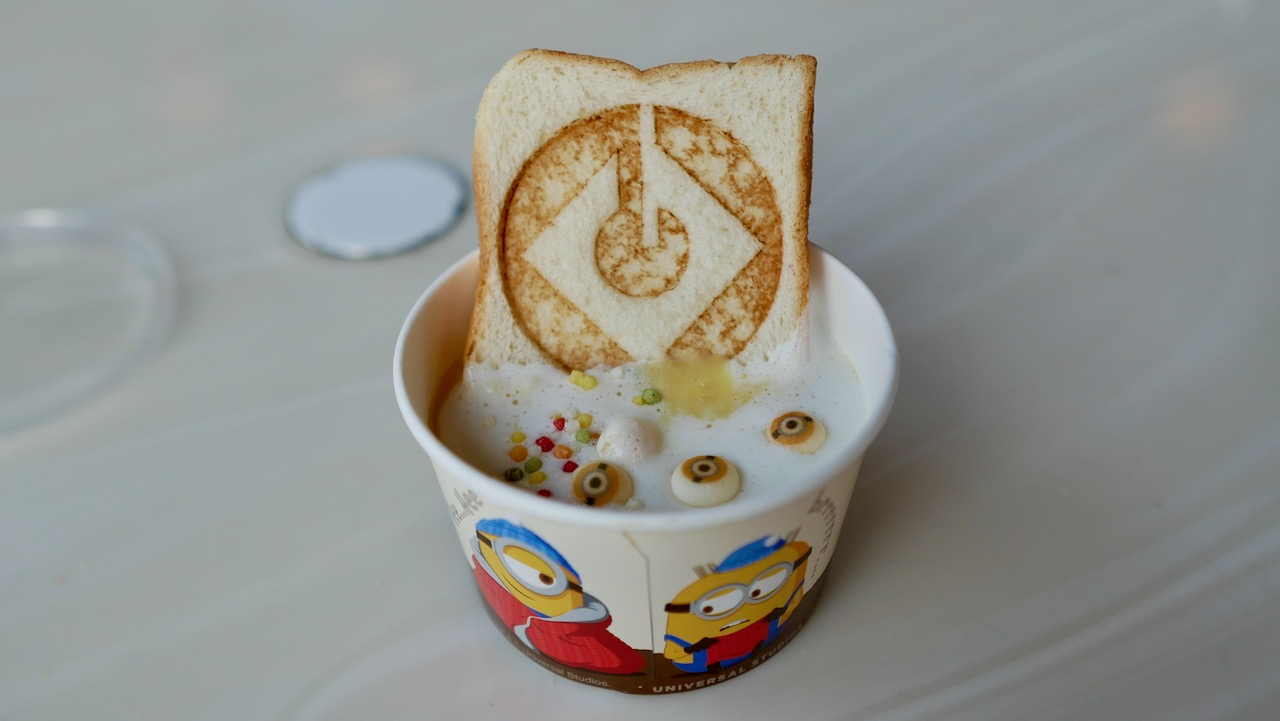 As winter approaches, you might be looking for ways to warm up while you journey around the parks. Sometimes we reach for cocoa, other times you want a nice bowl of soup to warm you up. Maybe you could go for the wacky Potato Chip Drink with consommé soup, or try this new Minion Corn Soup available at the Fast Louie’s window in New York! But, while this soup may be pleasing to the eyes, you’ll soon find that “cute” is the only strong factor for this winter snack.

Available at Fast Louie’s for ¥600, the Minion Corn Soup comes in a cute Minions Cozy Winter-themed container with Minion-shaped cracker balls and a piece of bread with the Gru symbol burned on it.

The Gru symbol on the bread was a nice extra touch to the theming of the soup.

The side of the cup features several Minions in their winter garb and cozied up for the winter. A few of these guys can also be seen in this holiday’s new Minions Cozy Winter merchandise line. Rather cute, isn’t it?

Unfortunately, cuteness is about the only thing this soup has going for it. The bread seems to all be from a couple batches done early in the day, as by the time we came in late afternoon, it was already stale. Dipping it in the soup was the only way to make the bread edible. The minion cracker bits are also nice and slightly sweet, which adds a nice extra note to the corn soup flavor. And as for the soup itself, it’s just plain old corn soup. It’s lightly sweet, rich, and warm with a corn flavor that is inoffensive to almost anyone. If you want something cute to Instagram then the cup, bread, and cracker bits will make this worth your money. Otherwise, go for the Potato Chip Drink to warm up for the same cost, plus the novelty factor.

The Minion Corn Soup is available through the Christmas season until December 27th at Fast Louie’s in Universal Studios Japan’s New York area if you’re interested in giving it a shot. Stay tuned to Universal Parks News Today for all the latest coverage of the holidays from Osaka, Orlando, and Hollywood!