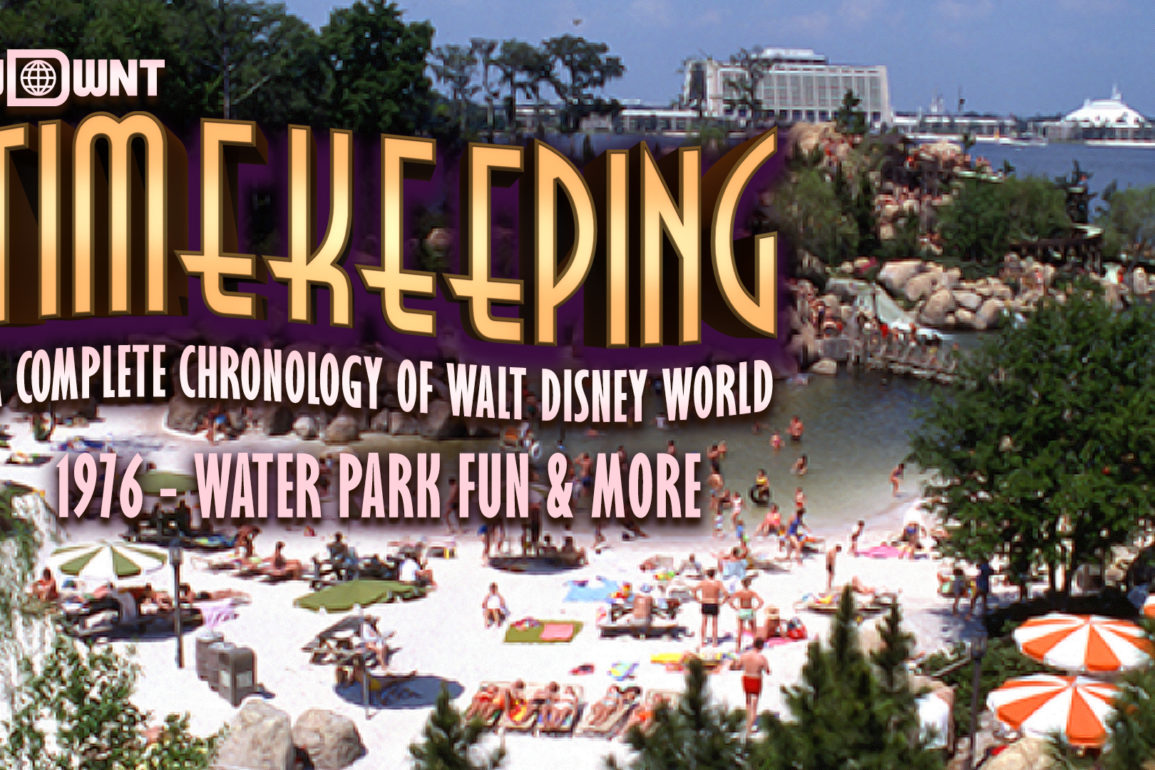 By the end of 1975, Walt Disney World Resort had largely recovered from the gas crisis, welcoming its 50,000,000th guest, Susan Brummer, on March 2, 1976. The Magic Kingdom was largely finished with its initial layout. The three hotels were operating at 97% capacity and the campground was under constant expansion. With the Vacation Kingdom a success, the company was now turning to the future—and the world—as it developed its plans for EPCOT.

After the opening of the majority of Tomorrowland the previous year, not much happened in the Magic Kingdom in 1976. In September, “America on Parade” ended on the 6th and the Character Cavalcade returned after that. That’s really the only major change at the park for 1976, but I do want to cover a few minor changes I may have missed in previous articles…

Starting in Adventureland, El Pirata Y El Perico opened as a small refreshment and hot dog stand in Caribbean Plaza sometime between 1974 and 1975. In this same period, the Tiki Tropic Shop was rebranded as just the Tropic Shop. Also, Tom Sawyer Island had a second refreshment stand in Fort Sam Clemens that served slushy drinks. The Fantasyland Art Festival moved from the Peter Pan queue area to the area now known as the Cheshire Café next to the Mad Tea Party in 1973. The Magic Kingdom had also been hosting Grad Night events since its first spring in 1972. (Author’s Note: I apologize for missing these changes, but I will include these updates as I find more primary sources such as maps and guidebooks that contain these often unchronicled details.)

The most significant addition to Walt Disney World in 1976 is inarguably River Country on June 19. Walt Disney World’s first water park was situated in the northeast corner of Fort Wilderness. Susan Ford, the president’s daughter, presided over the park’s grand opening. Slides such as Slippery Slide Falls and Whoop ‘n’ Holler Hollow emptied into the two “pools.” There was an White Water Rapid tube slide as well. Upstream Plunge was a normal pool and Bay Cove was a sandy bottom lagoon fed off of Bay Lake. Rustic swimming hole rope and tire swings, plus barrel bridges rounded out the 4,700 person park.

At the resorts, the Polynesian Luau saw some minor seating changes as risers were added. 113 more campsites were added to Fort Wilderness. Over in the Lake Buena Vista area, the remainder of the Treehouse Villas opened, bringing the total to sixty.

While nothing was really being constructed on property at this point, we are going to start chronicling parts of EPCOT’s development as it was becoming the Resort’s and the company as a whole’s largest project. EPCOT had been proceeding for years with the industrial park and World Showcase as separate, but linked projects—however it was in 1976 that the EPCOT Center we would come to know was developed. The park and Future World both got their names in 1976. It does still appear that some version of the industrial park was still in the works as well.

Throughout the year, Imagineers and executives traveled around the world to a variety of countries to pitch pavilions. In addition to the countries we got, they also presented to the Philippines, Russia, Venezuela, and Iran. Every country was pitched an attraction, restaurant, and shopping complex. What would be known as the Rhine River Cruise was presented, as was an omnimover attraction for Japan. The concept for The American Adventure was also being pitched to American companies for sponsorships.

At this time, the EPCOT Center project had the entry through World Showcase leading to Future World. While not much was laid out for Future World, a centerpiece about “Spaceship Earth” was planned. However the park was specifically going to highlight “new concepts in oceanography, space, energy, agriculture, transportation, health, communications, and the arts.” All of these planned exhibits were being planned to be shopped to sponsors as they were developed. While this version of EPCOT would seek to teach the average guest about the topics Walt had originally wanted EPCOT to be a place to develop, the company was also still working on implementing alternative technologies such as solar power, alternative fuels, and natural sewage treatment throughout the Walt Disney World property.

While the majority of the Walt Disney World we know today didn’t exist by the end of 1976, the entire concept was now there. Theme park, zoological, and water parks all existed. Hotels and vacation villas were available. Boat, bus, and monorail transportation existed. There were sports and recreation facilities as well as a shopping district. Everything that exists now, existed then, on a smaller scale. And with EPCOT Center development now in full swing, the resort was fully ready to move on to its grand and miraculous future.