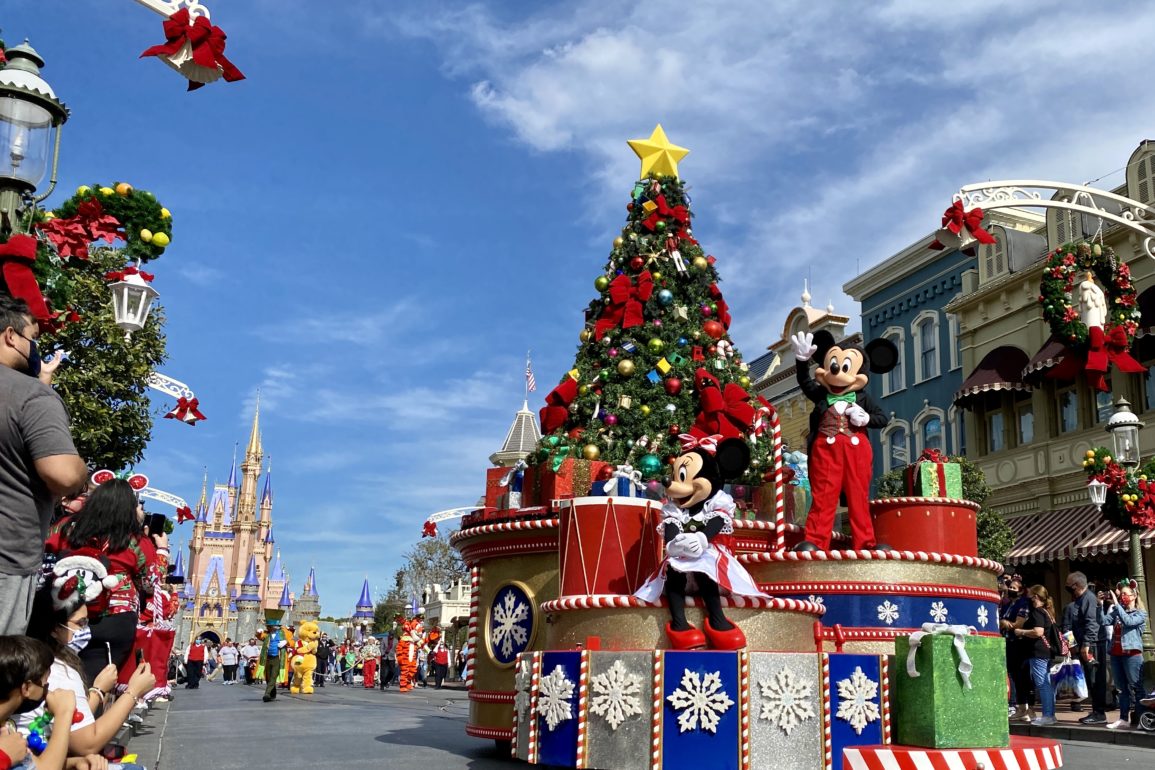 Hello from another holiday cheer-filled day at the Magic Kingdom! It started out chilly, but warmed up quite nicely, and we took full advantage of the weather to see what was new at the park. Let’s get started!

We started out our day by heading to Sir Mickey’s behind Cinderella Castle. We had heard that the last installment of the Minnie Mouse: The Main Attraction Collection might be arriving today, and apparently we weren’t the only ones who had heard the rumor.

A long line very quickly formed, looping in front of the building as the pathway down the side of Cinderella Castle was closed. We heard the line went past the carousel at one point. Unfortunately it was all for nothing, as the collection had not arrived, and was not for sale in Sir Mickey’s. There’s no word yet on when or where it will go on sale.

After that disappointment, it was a day completely void of any new, fun merchandise, save the arrival of iPhone 12 Mini cases to the MaDe kiosk in Tomorrowland Light & Power Co. Beyond that, we had a day of construction updates and hot cocoa drinking to stay warm!

Working our way in from the front of the park, we found pieces of the glass roof had been removed on the Main Street USA Train Station.

Matching panels on each side had been removed.

We found filming going on at the Hub when the park opened, but they quickly cleared away. We could not see what the filming might be for.

We checked in on Cinderella Fountain, but found no new changes. The new base color is growing on us though!

At the construction site for TRON Lightcycle / Run, a truckload of steel framing was delivered today, and they were working on unloading it while were there.

There was also a worker in a man lift working on this join of track.

More train track was installed last night near the Fantasyland Train Station. Yesterday the track stopped at the corner of the seating area, and today it almost reached the exit gate and the end of the railroad ties.

Yesterday we saw tape lines had been added in front of Big Top Souvenirs, but today they had been removed. They had been put in place to accommodate additional stroller parking.

Yesterday we found lots of concrete work going on across the park, and today we found another spot. This new concrete is in between Memento Mori and The Haunted Mansion.

Towards the end of our day at the park, we witnessed a rather tense moment for Goofy as he called a halt to the cavalcade and left the parade route on foot. It wasn’t clear what sort of distress he was in, but we hope he’s doing much better now!

We had a wonderful day at the Magic Kingdom, and we hope you enjoyed coming along with us! Have a magical day!