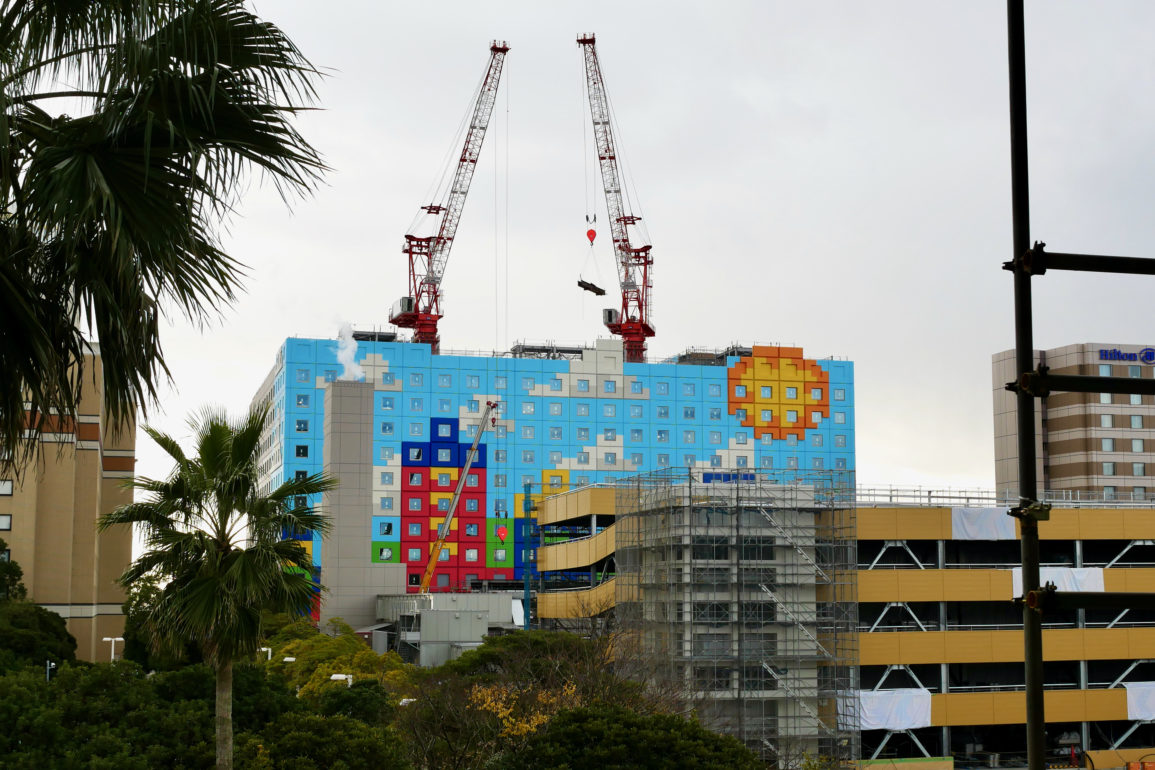 Tokyo Disney Resort still hasn’t said a peep about the upcoming Toy Story Hotel being built in the Bayside area of the resort in over a year. But as far as we know, it’s still scheduled to open sometime in 2021, and appears in a very good position to make good on that promise! We took a visit to the Toy Story Hotel this week to check out the latest progress and see how far the project has come this month!

The hotel’s facade is just about complete, with just a few missing pieces here and there. The sun and very Toy Story-style clouds on the front are now completely visible.

Land clearing has begun in earnest in front of the parking garage. Judging by the loop, I’m guessing this could end up being a bus/taxi loop, but it’s not clear.

Painting and other work on the parking garage seems to be winding down as well.

Cranes on top of the building are still working on other segments of the roof, with all eleven stories in place already. These upper structures are likely home to HVAC and other major equipment.

We’ll touch on the lower structure addition in a moment, but it seems that the same may be destined for the Bayside Station-facing segment of the building. This unfinished section, similar to that which was present in November in the back, would suggest that the same is coming to the front soon. Points to attach more beams can be seen as well.

From the side, we can see that most higher-level facade work is complete.

Lights of some kind could be seen in two rooms on the east side. It was difficult to tell whether these were the permanent light fixtures or just construction lights hanging from the ceiling.

In the back, an addition is under construction in the former gap of the U-shaped structure. Presumably this area will be used to hold storage and delivery facilities, or it could be a part of the lobby and Guest facilites. Hopefully we’ll find out next year when the Toy Story Hotel opens, or preferably even sooner! Until then, keep watching WDWNT for the latest news from Tokyo Disney Resort and the other Disney parks worldwide!

Next
PHOTO: Gargoyle Installed on Roof of Gideon’s Bakehouse at Disney Springs