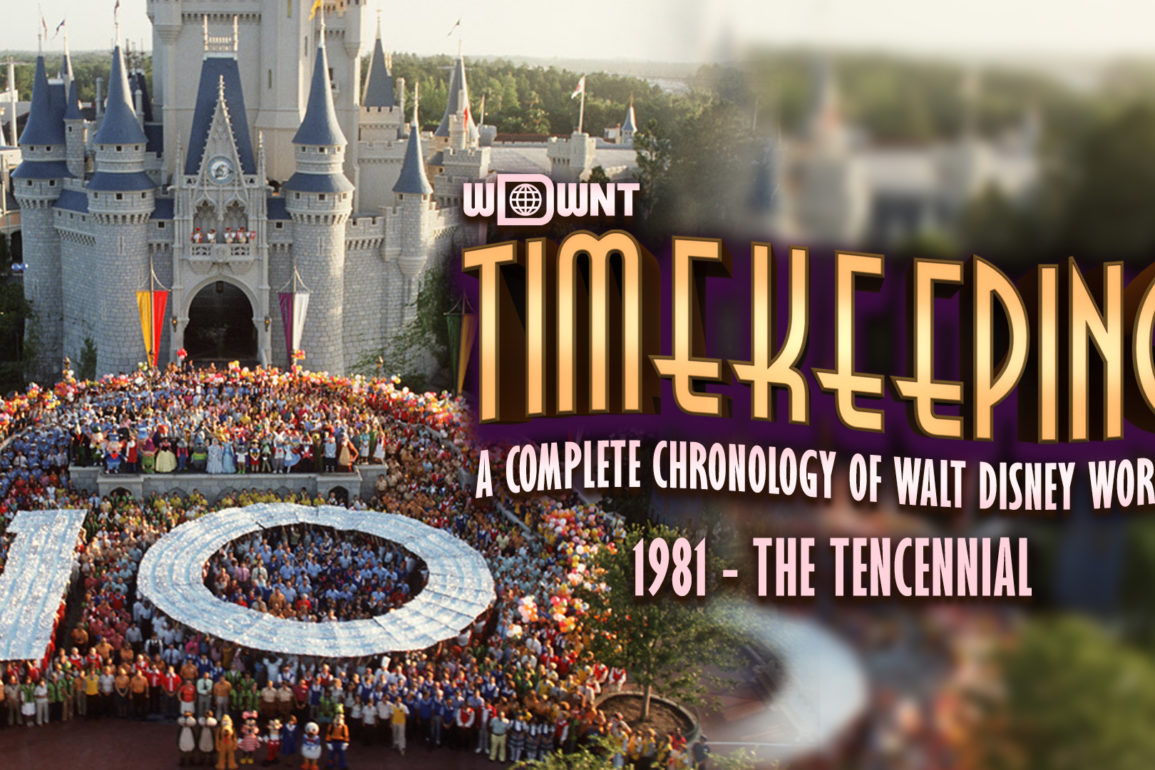 October 1, 1981 would mark Walt Disney World’s tenth anniversary, and to celebrate, the company launched the Tencennial celebration. The resort was also in full-speed development for EPCOT Center, with the park slated to open on Disney World’s 11th birthday. But with a milestone to celebrate, Disney is not a company to sit and let a year go by.

Always ready for self promotion, the EPCOT Center Preview opened on Main Street temporarily replacing the Walt Disney Story area on June 1. The main part of the Preview Center was the 15 Minute “The Dream Called Epcot” video as well as a model of the park. Also on Main Street, the Wonderland of Wax became the Holiday Corner. The Fantasyland Art Festival which had already moved from across from the Skyway to near the Mad Tea Party in 1973, now closed completely. A new stage show, “Disney World is Your World,” premiered at the castle stage. Also worth noting, that the guide maps began to feature a new stylized, but detailed map of each land. A map with this level of detail had been missing since 1976. These guides were the 8 by 5½ inch versions that had been used since 1977. Prior to that the guides were 8 by 3¾ inches.

The main part of the Tencennial celebration was the Tencennial Parade. Debuting on the resort’s October 1 birthday, the parade would run for a full year. The parade units were designed to reflect the lands of the Magic Kingdom. While the debut kicked off with a 1000-person band, the parade generally began with Mickey and Minnie atop a float prominently featuring the stylized number “10” and dragging a float of mounted troubadours. This was followed by the horse drawn trolley and flower carts. Next was a band in a gazebo, and bicyclists dressed like the Dapper Dans. This section was the Main Street Unit. Next came the Adventureland floats, featuring a large horse-drawn float and a float featuring steel drums. Donald riding a large drum, flanked by a fife and drum corps, represented Liberty Square. A horse-drawn hay cart mounted by cowfolk and the Country Bears, and a mockup of the Diamond Horseshoe stage as a float represented Frontierland. A blue, silver and mirrored float with dancing robots signified Tomorrowland. Cinderella’s Coach and Casey Junior pulling a car of presents constituted the Fantasyland unit. The parade ended with a horse-drawn stagecoach, and a train of flat castle facades with dancers.

In June 1981, the Contemporary saw a major entertainment change at the Top of the World. After nearly a decade of rotating guest acts, the supper club was replaced with a Disney-owned show, Broadway at the Top. The company had previously announced plans for new hotels, but now the Grand Floridian, Mediterranean, and Cypress Point Lodge resorts were all named and being planned. Along with the under-construction Buena Vista Palace, three more third-party resorts were also being added to the Lake Buena Vista area. Negotiations were underway with leases to Marriott, Hilton and Lowes.

While many if not all of these locations existed prior to this year, 1981 is the first year I have been able to find a directory to the Walt Disney World Village. So here is a long overdue rundown of the shops, restaurants and entertainment offerings at the Village in 1981.

The area also featured the Village stage, the Village Marina for watercraft rentals, and a cruise dock.

EPCOT Center construction was moving ahead at full speed. In Future World, all of the opening day attraction pavilions were in the vertical construction phase. Spaceship Earth, Universe of Energy, World Of Motion, Journey into Imagination, and the Land had the majority, if not entire, show buildings complete, as well as their final names. Horizons and the Living Seas had the ground clearing done, and CommuniCore was somewhere in between. The monorail loop was also complete.

In World Showcase, there was slower progress. The lagoon had been dug, but some pavilions do not appear to have gone vertical at all. From the aerial view, it looks like the show buildings for American Adventure, France and Canada were complete, but not the facades. Most of the other pavilions appear to be in different stages of construction, with Mexico and China appearing to be the furthest behind.

Offsite, effects, sets and animatronics were in progress. Filming was underway across China, Canada and France. The China film crew was the first western unit to shoot in the country in over thirty years. Some of the show elements, including statue work and animatronics, began to arrive on site for installation as well.

Much of what 1981 Walt Disney World would be known for was temporary. The Tencennial elements would end with the opening of EPCOT Center. It’s doubtful many people would have considered Walt Disney World to be in its infancy in 1981, but in hindsight it was the last time it would truly be a simple vacation destination. In 1982, everything would change.

Tune in Sunday evening at 8:00 PM ET on YouTube for Pressing Issues, where we discuss this year’s developments!

'Disney Enchantment' to be Performed Earlier Starting August 8May 30, 2022
EPCOT To Close Early on June 5, No 'Harmonious' Performance ScheduledMay 17, 2022
Mickey Mouse: The Main Attraction Mad Tea Party Collection Spinning to shopDisney May 20May 17, 2022

Next
PHOTOS: New Windows Installed In Mouse Gear at EPCOT