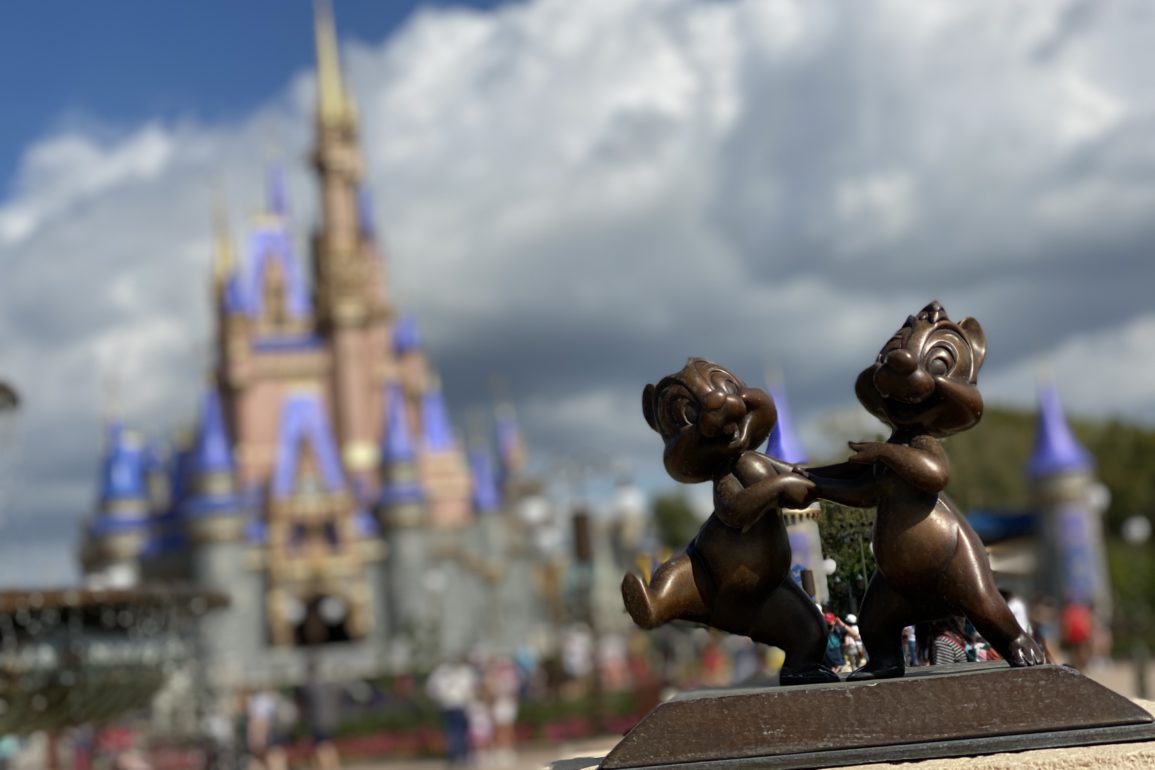 Hello from another glorious day here at the Magic Kingdom! We’ve been keeping a close eye on this lovely park for what new things we could find, especially with all the construction here recently. Let’s get started!

We had an exciting morning as we found the high reach machinery had been brought in overnight into Cinderella Castle moat for work on installing the 50th Anniversary decorations on Cinderella Castle.

We also found the East side of Cinderella Castle stage had been stripped of the metal framework and tubing. The vertical tubes sticking out of the stage would have been under one of the set pieces and were most likely for special effects.

The Tomorrowland Transit Authority PeopleMover support closest to the entrance to the land has had it’s scrim fabric removed, revealing a seemingly-repainted but familiar metal base underneath.

The Tomorrowland Transit Authority PeopleMover remains closed for refurbishment, and was fairly quiet today, with very little testing and only one Cast Member seen on the load platform at a time. Unlike yesterday, when testing did occur, the audio track for the attraction was not running.

Another patch of new concrete was spotted in Tomorrowland, completing the work surrounding the water fountain in front of Auntie Gravity’s Galactic Goodies. Judging by the score marks next to it, we expect to find that patch roped off tomorrow.

We found no change to the Gaston’s Tavern sign, despite it now being five days since it was primed one color. We hope this refurbishment will be completed soon.

The scrim and scaffolding that we saw removed yesterday in this corner was replaced overnight. It appears work has not been completed just yet, and the scrim will remain a while longer.

The curtain to the small rear room in Memento Mori was open today after two days of being closed. Upon looking inside, we noticed that the “Host A Ghost” jars had been removed from the display shelves, leaving only themed nick knacks and battery powered candles.

We found some new merchandise around the park, staring with these character mugs. For more pictures and information, check out our article here.

We also found this stacked tea cup mug at The Confectionery, featuring The Mad Hatter just inside the rim. It retails for $19.99.

We found two new designs for St. Patrick’s Day in the MaDe shirt kiosk in Tomorrowland Light & Power Co. Each shirt is customizable and starts at $29.99.

We found a new magnet featuring Madame Leota at Memento Mori today. For more pictures and information, check out our article here.

We had a lovely day at the Magic Kingdom, but we wanted to stop by Disney’s Polynesian Village Resort to check out what might be new there.

We found this redesigned magnet as part of the new exclusive merchandise line for $12.99 at Boutiki.

We also found this beautiful “Beauty and the Beast” stained glass window hanging wall decor for $49.99 at Boutiki.

We took a moment at the end of the day to reflect on the 500,000 American lives lost to COVID-19. The flags across Walt Disney World property and the country will remain at half staff from now through Friday in remembrance of those who lost their lives. We hope you and yours stay safe during this unprecedented time.