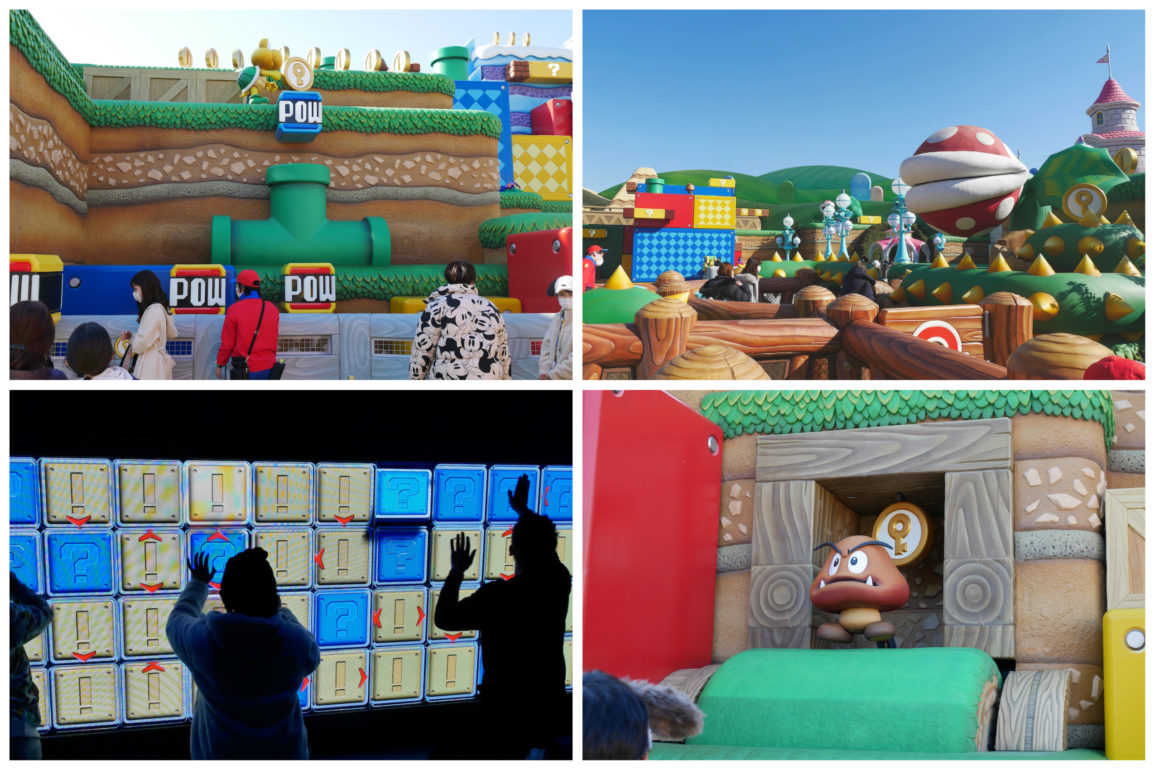 So you’ve got your Power-Up Band, you’ve raced on Mario Kart, now what? Why not try to battle Bowser Jr.? Well to do that, you’ll need three key coins to unlock his lair. How do you get those, you ask? By playing the Key Challenges around Super Nintendo World! And you can learn the basics of each right here, either by watching our special YouTube video, or reading on!

There are four challenges plus one rather simple binocular search to get keys. Depending on the difficulty and your level of expertise, Crew Members working the challenges can adjust the difficulty and make it harder for your group (or you individually). These difficulty levels can also earn you separate stamps in your Universal Studios Japan app.

The goal of this game is to spin a crank as fast as you can to knock the Goomba off. It’s probably the simplest of the four challenges, but can you can really throw out your arm depending on how fast you turn the crank.

Piranha Plant Nap Mishap is definitely a team effort game. The goal of this is to turn off all of the ringing alarm clocks by hitting their tops before Petey Piranha wakes up! The animatronic at the center is actually quite stunning, rising up several feet during the game, and even making slight motions when the game isn’t being played. It’s a fairly wide space, so Crew Members generally group Guests together in groups of three or four, even if they’re from different parties.

Koopa Troopa POWer Punch was demonstrated by Shigeru Miyamoto in the Nintendo Direct last year. The goal is to time your POW Block punch at just the right moment so a spinning shell bursts through the upper pipe exit, hitting the blue POW Block and receiving your key. The timing between the three lower blocks activating can be adjusted by Crew Members to be as far apart as 1.5 seconds, making timing extremely difficult!

Inside the underground area lies another key challenge. Bob-Omb Kaboom Room is probably among the more difficult of the four, requiring you run around assembling pieces of a key coin before dragging them all into place. It can be done solo, but generally this is best played with a team. Couple that with an occasionally unresponsive touch screen, and this can be a frustrating exercise in futility. But it’s a lot of fun when you get everything working! Just make sure you assemble the key before the big Bob-Omb blows!

The most difficult of the four (depending on your teamwork skills) is Thwomp Power Panel Panic. Housed inside its own mini-cave, the goal is to flip every switch from blue to yellow. But beware, touching one switch can affect others, and you need to get them all to yellow before the Thwomp strikes down and mixes everything up again! Every attempt we made to do this solo ended in failure, only with a team did it work out.

If these challenges are too… well, challenging for you, you can also find a key by using these binoculars near Pit Stop Popcorn and Mario Kart: Koopa’s Challenge to locate an airship in the skies above Universal Studios Japan. Do it properly (and pray your Power-Up Band is read), and you’ll get a key!

What do you think of the Key Challenges? Are you excited to give them a shot yourself? Let us know in the comments below, and stay tuned to Universal Parks News Today for complete coverage of Super Nintendo World!