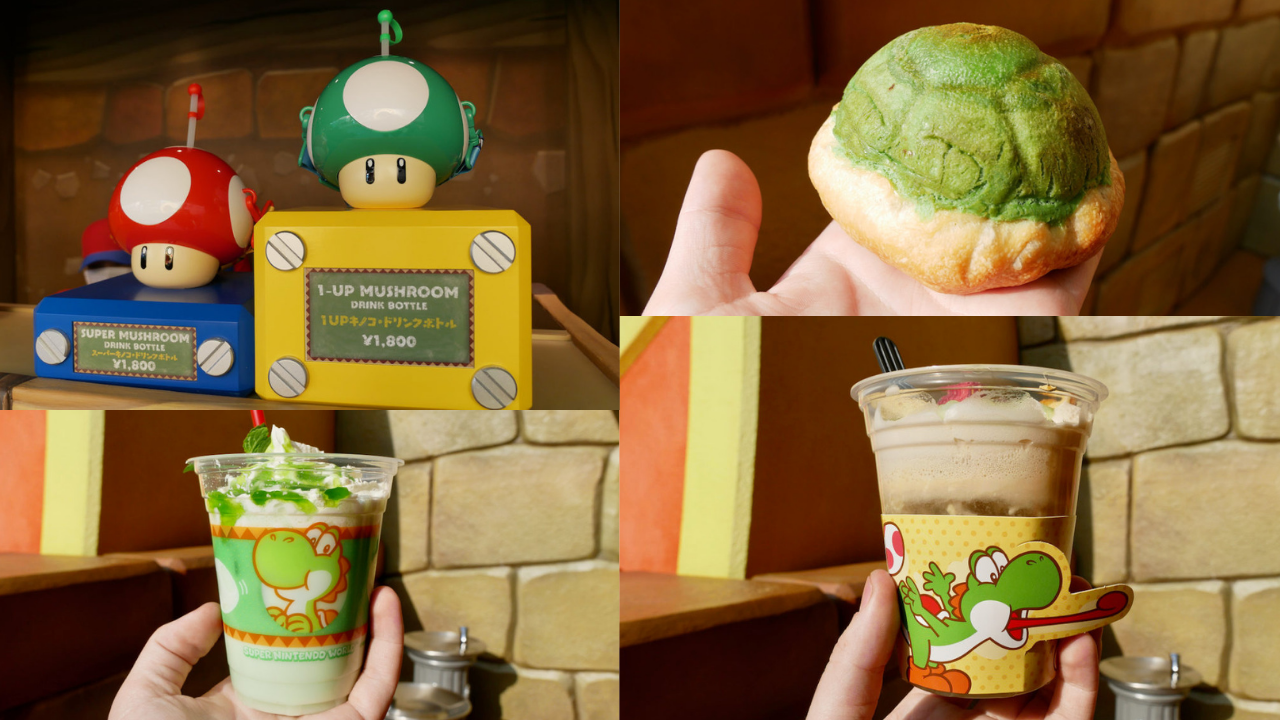 Welcome to Super Nintendo World (not to be confused with Super Mario World, first appearance of everyone’s favorite green dinosaur, Yoshi)! Well, Yoshi does get a starring role in his own attraction, and also here at Yoshi’s Snack Island! We previously got a sneak peek at these just a few weeks ago, but now we’re allowed to share everything, including our thoughts, with you! Are you ready to indulge in some adorable Yoshi-themed treats? Then let’s dig in! You can watch our YouTube video review, or read on for photos and musings.

The menu at Yoshi’s Snack Island is rather small. After all, “snack” is right in the name. Look towards Kinopio’s Cafe if you want real meals!

There’s tons of souvenirs to be found in Super Nintendo World, whether in its two shops or having a bite to eat. Certainly Yoshi’s Snack Island is no exception, where you can pick up a Super Mushroom or 1-Up Mushroom Sipper! We previously saw the Super Mushroom version at the Mario Cafe back in October, but the 1-Up Mushroom rendition is exclusive to Super Nintendo World. Both are available for ¥1800 ($17.14)

This rather novelty calzone comes in the shape of a green Koopa Troopa shell, which Yoshis of course love to eat and spit out at oncoming enemies! The wrapper even features Yoshi with his tongue going for the shell.

The calzone itself is quite excellently crafted with a real Koopa Troopa shell look. It also has just hard enough of a crust to not come apart when biting in, which is a huge plus in any bun or calzone.

Yakisoba, for those unfamiliar, are a style of Japanese noodles stir-fried with a sauce very close to Worcestershire sauce. And that’s most of what I tasted inside this calzone. What cheese there was did not make itself very apparent, as you can see from this inside view. It’s a pleasant snack but might leave you with a strange look on your face if you’ve never had yakisoba noodles before. This will be very hit or miss depending on your tastes, but I personally enjoyed the Green Shell Calzone!

Yoshi’s Hot Apple Tea is definitely the sort of thing I would look for on a chilly winter day in Osaka, but that’s mostly because I’m a huge sucker for apple tea. Plus who can resist this adorable sleeve?

The top is decorated with marshmallows, whipped cream, and dried apple and strawberry pieces, all of which compliment the tea itself excellently. There’s a minor problem that comes when you get down to just tea, and that’s simply because it’s a bit watery. It’s not a dealbreaker by any means, it’s still something that will warm you up on a chilly day with a nice, fruity touch. Otherwise, it has a delightful apple flavor (which could use less water) complimented by lots of whipped cream and toppings. Despite my slight forthcomings, you’re not likely to be disappointed with this choice either!

Yoshi’s Melon Lassi (also served in mango flavor) is served in this adorable printed Yoshi cup and features lassi, a very yogurty drink, topped with whipped cream and melon syrup. The simplest way to describe this and the Mango Lassi is honestly just like drinking yogurt. It’s a wonderful experience that hits home in a different way than a Coke will for sure, but the melon and mango flavors both hit the target just right (if a little too sweet in the case of melon), and will cool you down when the brutal, humid Osaka summers come!

All in all, you really can’t go wrong at Yoshi’s Snack Island! The booth is almost hidden away, next to the exit for Yoshi’s Adventure in the back corner of Super Nintendo World. But don’t let its tucked-away location deter you—everything here is worth your hard-punched coins! Be sure to let us know which of these sounds most delicious to you in the comments below, or on social media, and stay tuned to Universal Parks News Today for full coverage of Super Nintendo World in Osaka!

PHOTOS, VIDEO: Check Out ALL 375 ITEMS Available at 1-Up Factory Store in Super Nintendo World