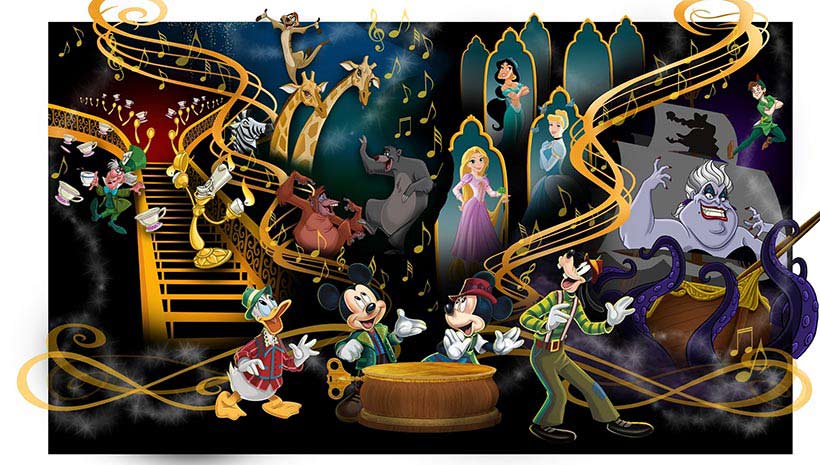 After Big Band Beat began holding “open rehearsals” yesterday at Tokyo DisneySea, the Oriental Land Company has decided today to expand this to the brand new Mickey’s Magical Music World show at the Fantasyland Forest Theatre in Tokyo Disneyland! This comes ahead of its rumored April 1st debut that was accidentally revealed and taken down last week on the Tokyo Disney Resort website.

As with Big Band Beat yesterday, the change appeared overnight in the Tokyo Disney Resort App. The app doesn’t explicitly say Mickey’s Magical Music World, but obviously that’s the only show that will be playing in the Fantasyland Forest Theatre. This is the first time any Guests will see the new show, which was scheduled to debut on April 15th, 2020 as part of the New Fantasyland expansion.

The show’s plot, revealed in December 2019, is as follows:

One day, Mickey Mouse, Minnie Mouse, Donald Duck and Goofy find a giant music box deep in the forest. They turn the music box’s large golden key and doors suddenly open. Accompanied by the songs associated with them, various Disney Characters appear including Snow White, Pinocchio, Woody and his friends from the Disney and Pixar Toy Story film series, and more. Mickey and his Pals are delighted with the surprising development and are excited to hear the next song. But when the last door opens, no one appears and no music is heard. Worried, Mickey and his Pals set off on a journey to find the missing song. Along the way they encounter characters from many Disney films. Lumiere from Beauty and the Beast welcomes them with a colorful banquet. King Louie and others from The Jungle Book together with Timon from The Lion King put on a powerful jungle-style performance. In a lovely world of starry skies and mirrors, the Disney Princesses dance a graceful waltz. And then Ursula from The Little Mermaid and Captain Hook from Peter Pan appear in a thrilling scene. Will the journey of Mickey and his Pals lead them to the lost song?

The theater’s interior was described by the Oriental Land Company in 2019 as well:

With half-timbers, tree forms and pillars, both the exterior and interior design of this theater were inspired by the forest. The chandeliers, which appear to use candles, are rustic as well. The theater is decorated with beautiful tapestries and murals which celebrate the forest and the woodland creatures from Disney animation.

The Fantasyland Forest Theatre seats 1500 Guests, but photography and video are strictly forbidden, even before the show begins.

With this next step in resuming entertainment at Tokyo Disney Resort, we may yet see parades and the other stage shows returning soon! So far, no definitive plans have been revealed for Song of Mirage, My Friend Duffy, Let’s Party Gras!, and the two parades at Tokyo Disneyland, so stay tuned to WDWNT for the latest updates. Are you excited to hear about Mickey’s Magical Music World? Let us know in the comments below!