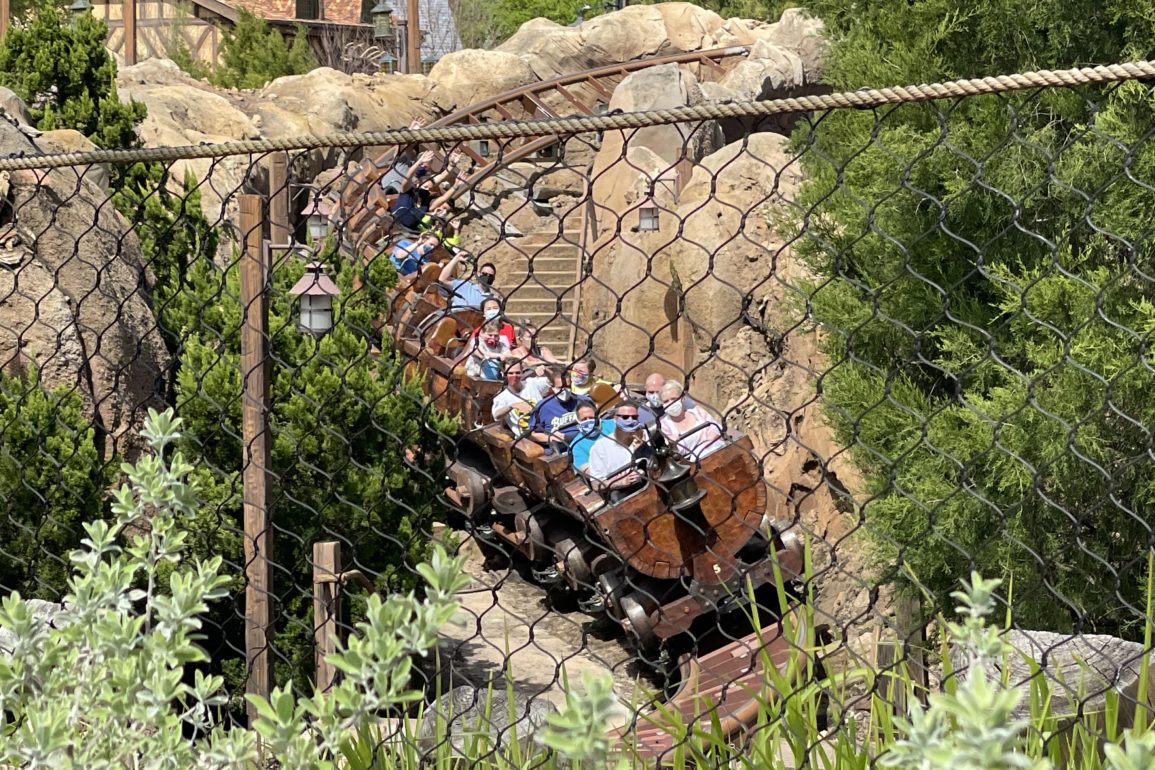 Hello everyone! Welcome to another day at the Most Magical Place on Earth during one of the busiest times of the year — well except for maybe next week.

This morning was a little different walking into the park, but we think it was because of a tent issue that had occurred, thanks to all of the wind. Four steady lines had quickly become three causing a mass guest jam, but our temperature was swiftly taken and we got to the park in no time.

Floor framing was installed on the castle stage, but honestly, with the anniversary in a little less than seven months, we aren’t worried about its progress at this point.

Now if they would only finish on the Peoplemover as well — maybe that’ll be an October 1st opening as well at this rate.

Random squares of concrete are being worked on around the speedway just before you get to the ride.

The pinch points being created in the area are causing physical distancing to be harder.

The flag is still standing on the TRON Lightcycle / Run canopy, flying high and strong as workers diligently work on finishing this canopy as soon as possible.

The fountain at Gaston’s Tavern is still not flowing but seems to be more filled than it was the previous days.

Themed scrims still line the top of the Peter Pan ride and the more we see it, the more curious we are of what they’re doing back there.

At the very least we got some cool, free stickers at Memento Mori. It’s always a pleasure to visit this store and if you get a chance, tell Glenn and Cory that we think they’re doing an amazing job.

The Hall of Presidents still awaits the addition of the new President.

Walking through Main Street U.S.A., we saw film crews interviewing guests and we happened to come just in time to hear this lovely couple talk about their history with the parks.

A new shirt has popped up on MaDe after being down for the last couple of days. You can get a T-shirt made for St. Patrick’s Day for $29.99 (if you can get a park reservation, that is).

Over at Disney’s Polynesian Village Resort, gates are being freshly painted and even with wearing a face mask, we can smell the strong odor.

Unfortunately, couldn’t see any new work being done on the children’s play area.

Meanwhile, more work being done on the monorail platforms at the front of the resort and another step closer to it being fully open.

Running back to the park we heard two rides had started loading every row. Big Thunder Mountain Railroad was one of them.

Seven Dwarfs Mine Train was the other ride now loading every row as well.

With that, we finally leave for the day with the view that has become so familiar throughout Walt Disney World: More construction. Until it’s all done, hopefully by October 1st, we’ll just have to get used to it.

Next
VIDEO: Watch The New Trailer For Disney’s “Cruella”