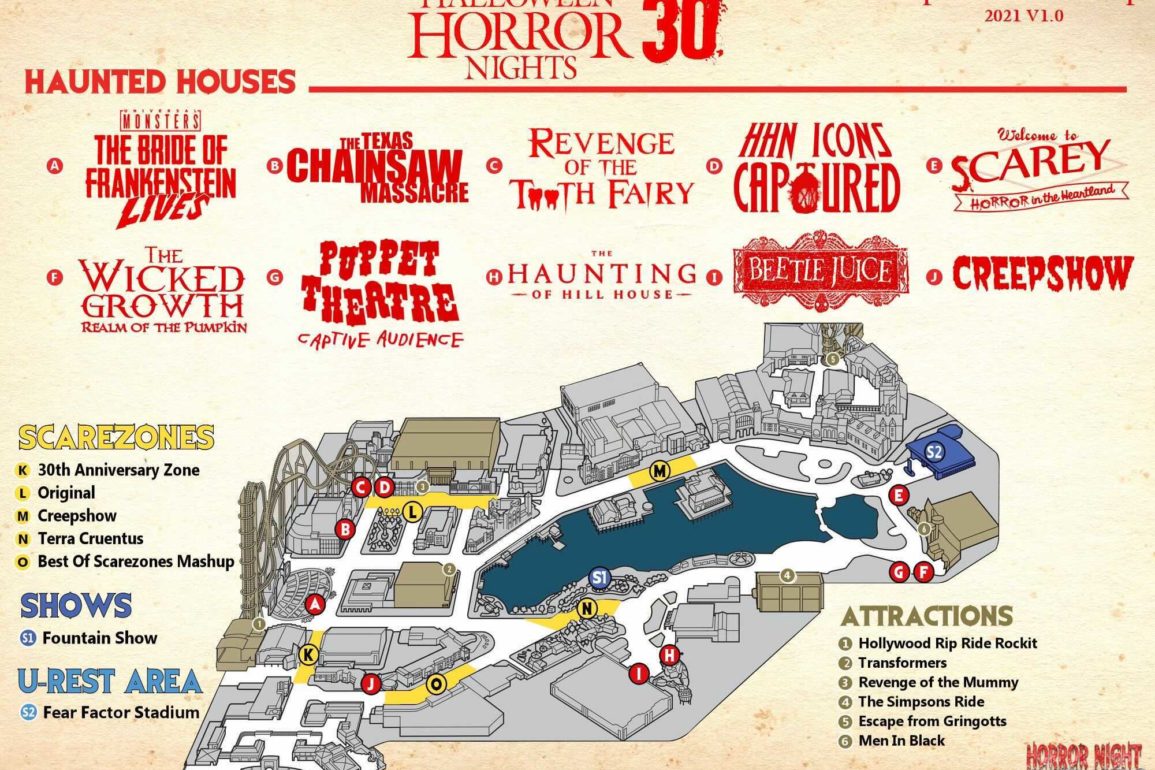 It might be Spring Break, but the Universal Orlando Resort is already building up the hype for the upcoming Halloween Horror Nights 30 at Universal Studios Florida. The latest speculation map has surfaced, thanks to the @HNNightmares on Twitter. Three houses debuted last year with social distancing, masks, and plexiglass for safety, although the official Halloween Horror Nights 2020 event was canceled. We’re dying for a full event, so let’s check out what fears could be awaiting us this year.

The Bride of Frankenstein Lives

First up, we see the Bride of Frankenstein Lives house returning. This was one of the houses that opened for guests in 2020 and was located near the Music Plaza Stage in Production Central.

According to the map, the entrance to the Texas Chainsaw Massacre would be located in front at Race Through New York Starring Jimmy Fallon. It wouldn’t be HHN without the sounds of chainsaws filling the night.

Revenge of the Tooth Fairy

What happens when a child says no to the tooth fairy? Revenge of the Tooth Fairy is another house that opened in 2020 and returns again this year. The entrance is in the same location near the New York Public Library facade.

We might not have gotten a full event last year, but we certainly saw a lot of merchandise featuring the HHN Icons of previous seasons. The entrance to this house would be located next to Revenge of the Tooth Fairy, near the Tribute Store.

Welcome to Scarey: Horror in the Heartland

Towards the back of the park, between the Fear Factor Live U-Rest and Men in Black Alien Attack, we would potentially find another original house, Welcome to Scarey: Horror in the Heartland.

The Wicked Growth: Realm of the Pumpkin

At the very back of the park, next to Men in Black Alien Attack, we might find The Wicked Growth: Realm of the Pumpkin.

Puppet Theatre Captive Audience was confirmed last year for the 2021 season and was the first official house announced for HHN 30. The entrance, according to the map, would be next to The Wicked Growth: Realm of the Pumpkin at the back of the park.

The Haunting of Hill House

You’ll find the entrance for the Haunting of Hill House located in the KidZone area of the park. This house is based on the Netflix series of the same name.

It’s showtime! Again! We’ve already gotten a preview of the new Beetlejuice merchandise for HHN 30, and a few lucky guests (including ourselves) were able to experience this house last year when it opened for just 3 days. Fans of Beetlejuice are even more excited now that it has been confirmed as returning for 2021. You can read our review of the house here.

Last but not least, guests can find the entrance to a potential Creepshow house in the Hollywood area where the extended queue is in place for Shrek 4D.

According to the map, the first scarezone you’ll come across in Production Central will be a 30th Anniversary Zone.

Through the streets of New York near Revenge of the Mummy, there could be an original scarezone, but there aren’t many details.

Creepshow is seen on the map as a scarezone and a house, so we’ll just have to wait and see what happens. As a scarezone, we see it on the map in San Francisco near the exit of Fast and Furious: Supercharged.

The scarezone Terra Cruentus would take over the pathway in front of the Media Center.

Throughout the Hollywood section of the park, you might find a Best of Scarezones Mashup.

Also on the map, there is a fountain show at the lagoon and the Fear Factor Live stadium is designated as a U-Rest area. There’s also a list of attractions that will be open during the event. Hollywood Rip Ride Rockit, Transformers, Revenge of the Mummy, The Simpsons Ride, Harry Potter and the Escape from Gringotts, and Men in Black would also be open in addition to the Halloween Horror Nights offerings.

This is still just a speculation map, but as we creep towards the HHN season, we’ll continue to bring you all the latest updates. What do you think of this speculation map? Are you looking forward to seeing these possible houses and scarezones? Let us know in the comments what you’re most excited about for Halloween Horror Nights 30!

Next
PHOTOS: New “Kingdom of Cute” Mug and Coaster Set Lands at the Magic Kingdom