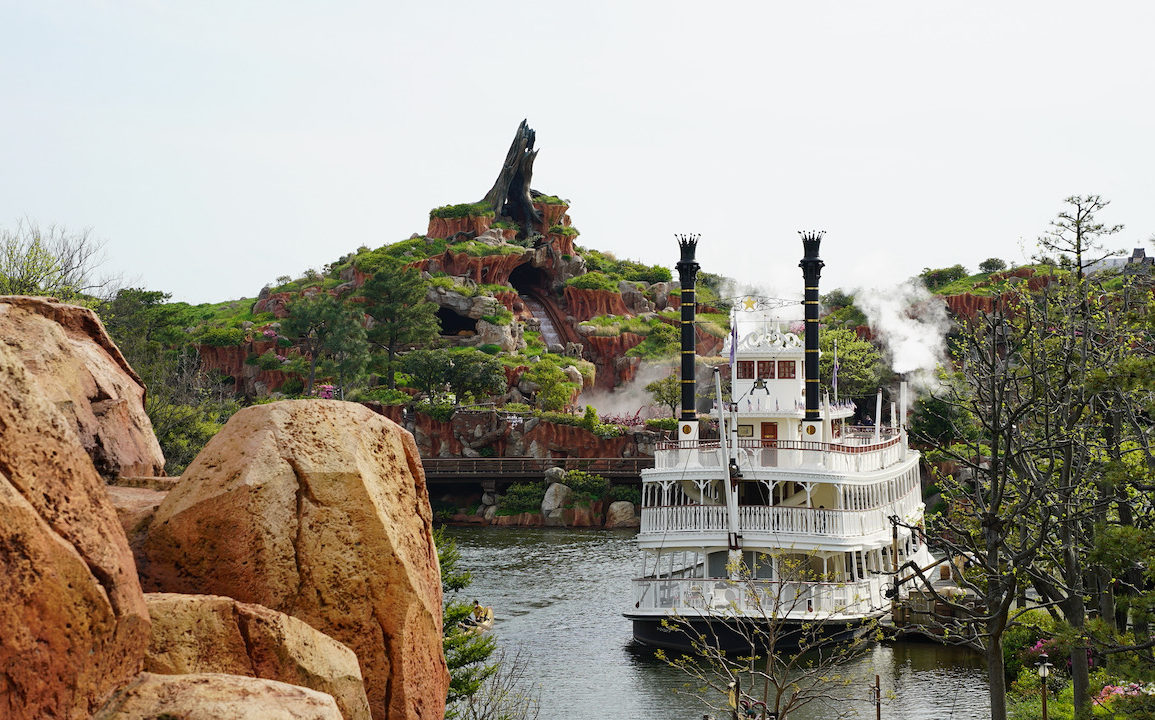 WIth Tokyo Disneyland now allowing 20,000 Guests to visit the park every day, there’s naturally been a few changes around the park, so we naturally stopped by to visit and check out what’s happening at the Kingdom of Dreams and Magic!

Progress has been rather slow on the repainting of the Tokyo Disneyland Hotel, the first major repainting since the resort opened in 2008. The repainting project has been underway for nearly two years, but it seems like they’re just getting close, with only the east wing left.

Fortunately, things calm down pretty quickly once Guests are allowed inside. It’s certainly nice to see a bit more foot traffic on World Bazaar compared to our nearly desolate visit back in January, when the Tokyo area was under a State of Emergency and only 5000 Guests per day could visit.

The “New Dreams, More Fun!” New Fantasyland window display has been removed from the Grand Emporium and replaced with the generic window display featuring Donald, Daisy, and the various Disney ducks.

Lines for Sweetheart Cafe extended as long as 45 minutes to try the new Sadaharu Aoki Paris Bakery collaboration items. Fortunately, the wait quieted down later in the day.

Belle and Gaston have finally been added as socially distanced face character greetings around World Bazaar!

Sadly we just missed the cherry blossoms here at Tokyo Disneyland, with peak bloom occurring at its earliest in 1200 years across Japan!

Over at the Main Street House Guest Relations area, the park map has been updated with the New Fantasyland attractions, including the E-Ticket Enchanted Tale of Beauty and the Beast.

In Adventureland, the Jungle Carnival games reopened on March 31st with new prizes—figures of Mickey and Minnie in their skipper costumes! A Standby Pass is required to visit Jungle Carnival.

Speaking of reopenings, Swiss Family Treehouse has finally reopened at Tokyo Disneyland, leaving Tom Sawyer Island the last attraction to not reopen since the parks returned to operation on July 1st of last year.

Cinderella Castle was having an excellent day today, with blue skies through most of the day, and beautiful flowers covering the center of the hub.

The latest additions to the gardens lining the inner hub were quite colorful this year and made the entire area smell like a meadow. Truly it brings out the mood of fantasy!

In Critter Country, Splash Mountain has finally returned to requiring Standby Pass most of the day. At times when Guests may freely queue, the line rarely reaches less than 40 minutes.

Photo services have restarted as a pilot on Splash Mountain as well. Guests are required to scan a QR code at the corner of their screen with the Tokyo Disney Resort App’s Disney Photo function to access and order their photo.

With the capacity bump, a number of eateries have returned to the park, including one of our favorites—Camp Woodchuck Kitchen!

Planters are up around the former site of a popcorn cart in Westernland, nearest to the Mark Twain Riverboat dock. With another cart a mere 50 feet away, this particular cart always felt rather redundant.

My oh my, it truly was a wonderful day.

Construction on Fantasy Springs is now visible from several areas of the park, including from the Westernland-Fantasyland transition and near Enchanted Tale of Beauty and the Beast.

Despite Japan Airlines moving its sponsorship from Mickey’s PhilharMagic to the Fantasyland Forest Theatre and its show Mickey’s Magical Music World, the signage at the attraction entrance has yet to be removed. Japan Airlines, also known as JAL, has been a Tokyo Disneyland sponsor since the park opened in April 1983. Until October 2017, they sponsored Star Jets before it was removed to make way for what is now Belle’s Village.

Alice’s Tea Party doesn’t open until 10am these days, so a sign warning Cast Members of the danger of entry when the ride is in motion that’s normally only visible during maintenance or overnight periods is visible in the morning.

Enchanted Tale of Beauty and the Beast is looking regal as ever. With capacity up, the Entry Request lottery system has sadly returned to the attraction.

But right next door, the Fantasyland Forest Theatre has finally opened, completing the New Fantasyland expansion at Tokyo Disneyland nearly a year after it was originally set to open! Stay tuned to WDWNT for a tour of the theatre!

As we mentioned earlier, Japan Airlines now sponsors the Fantasyland Forest Theatre. With this move, they now sponsor theaters at both parks, presenting the coveted Broadway Music Theater and Big Band Beat at Tokyo DisneySea.

The Happy Fair with Baymax is finally on at Tokyo Disneyland, and that means the special Happy Fair Lab photo spot with Baymax is open! As always, keep your eyes here on WDWNT, we’ll have a full tour ready for you shortly. In the meantime, get a load of those Baymax lanterns!

Finally, Monsters, Inc. Ride & Go Seek! remains closed through April 11th for its extended annual refurbishment. It closed back in January, so we’re hoping the entire attraction has received the care it deserves!

And that’s the latest here at Tokyo Disneyland! We’ve got so many incredible things to show off for you, so be sure you stick around here on WDWNT for the latest news! What was your favorite part of today’s tour? Let us know in the comments below!

Fantasy Faire Royal Theatre Receives New Color Scheme Following Refurbishment at Disneyland ParkMarch 27, 2022
Cast Members and Imagineers Hope Disney Will Halt Their Relocation to Florida Due to Ongoing Politic...April 28, 2022
'World of Color' to Use Virtual Queue When it Returns to Disney California Adventure on April 22April 14, 2022