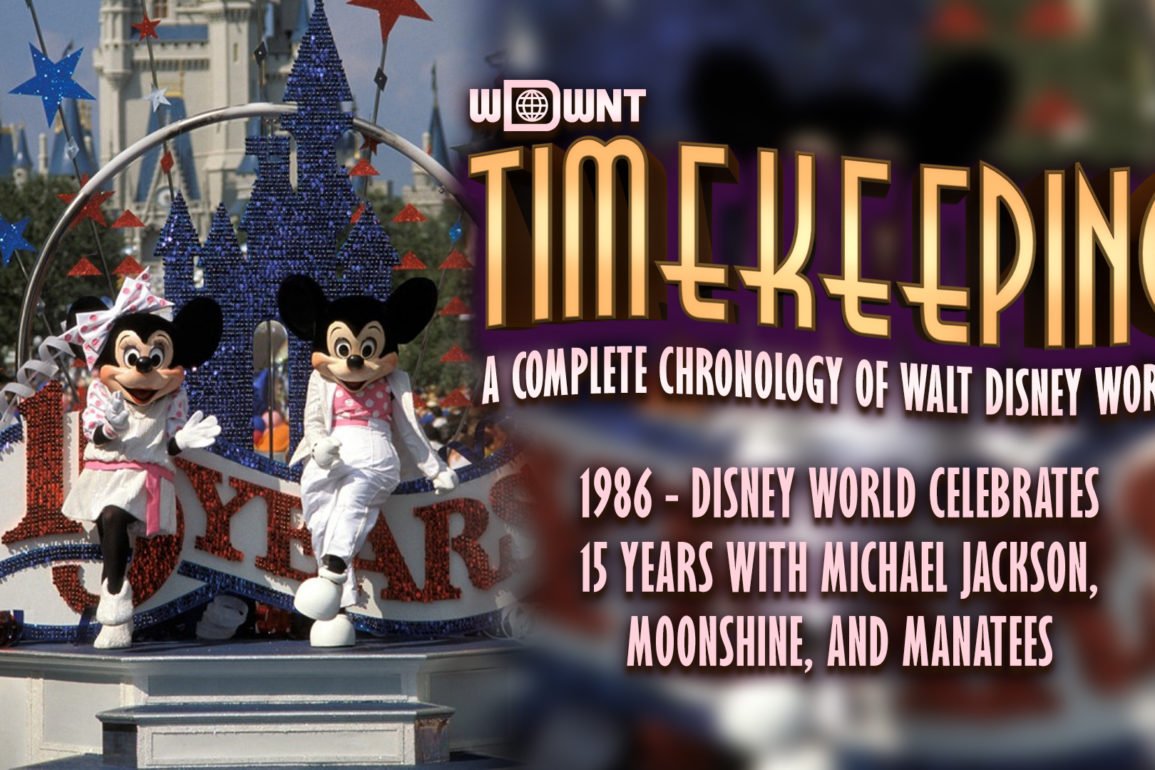 The Walt Disney World Resort would hit a milestone in 1986. Not only was it the resort’s 15th anniversary, celebrated in a big way, but it would also mark a change in the very fabric of what a Disney World attraction would be moving forward. EPCOT Center truly became the complete version many fans are nostalgic for, originals would see refreshes to keep them modern, and growth of the resort hotel concept really began.

Main Street stores would see a few changes in 1986. The New Century Clock Shop would close in April. The Holiday Corner and The Cup’n Saucer both closed around the same time, and all three would be incorporated into other shops.The Main Street Bakery began to be referred to as the Main Street Bakery and Cookie Shop. The Hospitality House appears to have reopened solely to take same day dining reservations.The Adventureland Kiosk was renamed Bwana Bob’s. In Frontierland, Bearly Country opened at The Country Bear Jamboree exit, and a second Woodcarvers was opened, as was the Frontierland Churro Cart.

Speaking of the Country Bears, one of the most noted, and at the same time most forgotten, changes to the Magic Kingdom in 1986 was the addition of the Vacation Hoedown show to the Country Bear Jamboree lineup. After two successful seasons of the Christmas show, the original attraction would be replaced with a more modern, vacation themes show. Like the Christmas show, the characters would appear in new attire such as camp t-shirts, rain gear, swimsuits and even Elvis regalia.

The song line up included:

Of course some of these were parodies of more “contemporary” hits such as the Beach Boys’ California Girls and John Denver’s Thank God I’m a Country Boy.

Lafayette’s Parfumerie would be incorporated into Old World Antiques, and the Baked Potato Wagon and Silhouette cart were added. In Fantasyland, on October 26, Gurgi’s Munchies & Crunchies replaced the Lancer’s Inn. And with the closure of the Holiday Corner, Mickey’s Christmas Carol would replace Merlin’s Magic Shop.

Next came dancers followed by the guest of the day in a Chevy Cavalier they won. Next came characters accompanying a birthday present float slowly leaking helium balloons, followed by roller skaters and a float with Chip, Dale, Tigger, Brer Bear and the Big Bad Wolf as a rock band. Next came another birthday present float, a float with Donald and Daisy surrounded by smaller presents, and another large present float. Next came the country bears on a bakers kitchen float. Finally the parade ended with Goofy and a bunch of dancers on what would become a very familiar crystal castle float.

The guest of the day was chosen at random as part of the yearlong giveaway. Every 15 second a guest entering through the turnstiles and one of the parks would win a prize. These could range from pins, video cassettes, savings bonds, park tickets, or once everyday a new car or a cruise. The cars were either a Chevy Cavalier, as seen in the parade or an S-10 pickup. The cruise was a partnership with Premiere Cruise Lines, who ran the Big Red Boat offering Disney themed cruises starting in1985. I remember my family winning a pin and a visor during one of our trips. The whole event kicked off at a celebration celebrating the bicentennial of the US Constitution hosted by Chief Justice Warren Burger hosted the ceremony, which included Dolly Parton and Ray Charles.

Epcot would see massive changes to Future World. The park’s icon, Spaceship Earth would undergo an update. Walter Chronchite took over the narration, while a few scenes were changed. The opening ascent saw the fog machine replaced with a starfield, and two scenes featuring a boy at a home computer and a woman in a modern office were added near the top, while the theme “Tomorrow’s Child” was added to the descent with videos of children along the side. All these changes took place over three days in May.

The Magic Eye Theater at the Imagination pavilion received a new film, Captain EO, on September 12. The $23 million dollar film ran seventeen minutes. Written by George Lucas, directed by Francis Ford Coppola and starring Michael Jackson and Angelica Houston would almost become a blueprint for the Eisner era infusion of celebrities into the parks. The space fantasy served as an extended music video in which the titular hero would use music powered energy to rescue a planet from a cyborg ruler. It featured a cast of robots and aliens that quickly developed merchandise lines.

Originally intended as an opening day attraction, The Living Seas sponsored by United Technologies finally opened on January 15. The experience began in a dark winding queue that highlighted real and fictional ocean exploration and led to a holding room where projections played as a narrator discussed exploring the seas before letting guests into the theater for the seven minute “The Seas” film.

After the film guests exited into a room where they would board the Hydrolators, simulated elevators, down to SeaBase Alpha. Once out of the hydrolators, guests would then board the seacabs which was an omnimover type vehicle through what was then the world’s largest saltwater tank. After exiting, guests were free to enjoy the exhibits in the two story SeaBase Alpha area that featured a lock out dive chamber, a wave tank, various sea life, a short film An Animated Atlas of the World, a deep sea exploration robot name JASON and several small exhibits discussion ocean ecosystems. Guests would be encouraged to exit through a second set of Hydrolators. The Coral Reef restaurant that looked out onto the main tank opened at the same time and had a separate entrance. 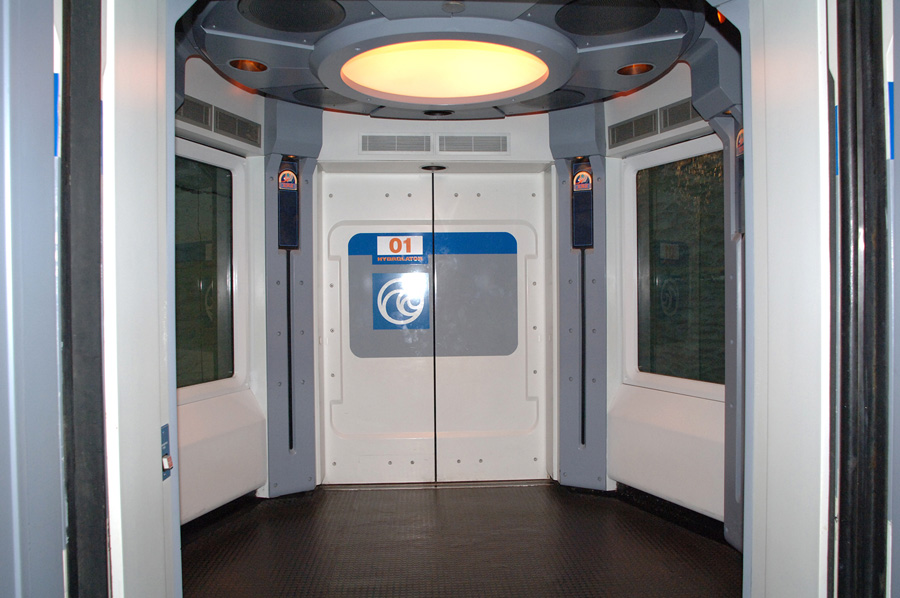 At the land pavilion the Good Turn became The Land Grille Room on May 14. The art exhibit in Mexico became “Splendors of the Golden Age – Three Centuries of Spanish Colonial Art” and Fiesta Fashions opened in the area that is now La Cava del Tequila. In Japan, the art exhibit was updated to become “Feather on the Wind – The Art of Japanese Kites.” The Magic Of Wales featuring Welsh gifts took over the Country Manor in the United Kingdom. Le Cellier in Canada would begin table service dinners while keeping buffeteria style for lunch. Construction also began on the Norway pavilion which also broke ground in 1986.

In February, the Golf Resort would change its name to the Disney Inn in order to appeal to a broader array of guests. This came with an additional 150 rooms as well as a Snow White theme. Just across the street, construction on The Grand Floridian broke ground on April 23. Over at the Polynesian, room renovations wrapped up as did work on Trader Jack’s and Village Gifts. Landscaping changed to add more palms and koi in the pond. January saw a new marina building, a guest laundry area and a concierge lounge.

The Contemporary also saw some remodeling. The lobby and Grand Canyon Concourse were updated along with the rooms. The rooms were redone with a “residential feel” featuring black granite sinks, newly tiled balconies, and bleached oak furniture. The Fantasia Shop and Plaza Gifts and Sundries were merged into a shop simply known as Fantasia. Concourse Sundries and Spirits replaced the old Spirit World liquor store.

These changes were in service of the expanding resort, an in May Bob Hope hosted the ground breaking ceremony for the Disney-MGM Studios, set to open in 1988 at this time. Work also began on Pleasure Island.

Over at Fort Wilderness, Pioneer Hall received a breakfast show: the Melvin the Moose Breakfast Show also known as the Country Morning Jamboree. Melvin would host the show featuring Chip and Dale dressed as cowboys, and humans Cindy Lou, the Professor and Alabam. Like a kid targeted Hoop Dee Doo, the show featured a mix of musical numbers and comedy, with a  break while guests ate family style. During the meal Chip and Dale cartoons were played. The grand finale was a kazoo-along where every guest was given a kazoo to take home.

The Walt Disney World Resort took huge steps forward in 1986. EPCOT Center added attractions to attract a modern crowd. The Magic Kingdom celebrated its history but proved it wasn’t stuck in it. And the resort as a whole really began the construction projects that would propel it through the 1980s and into the 1990s. These projects would take years, but Disney would not sit still waiting for them to be complete.

Next
PHOTOS: Cast Members to Receive “Bringing Back The Magic” Nametags for Disneyland Reopening