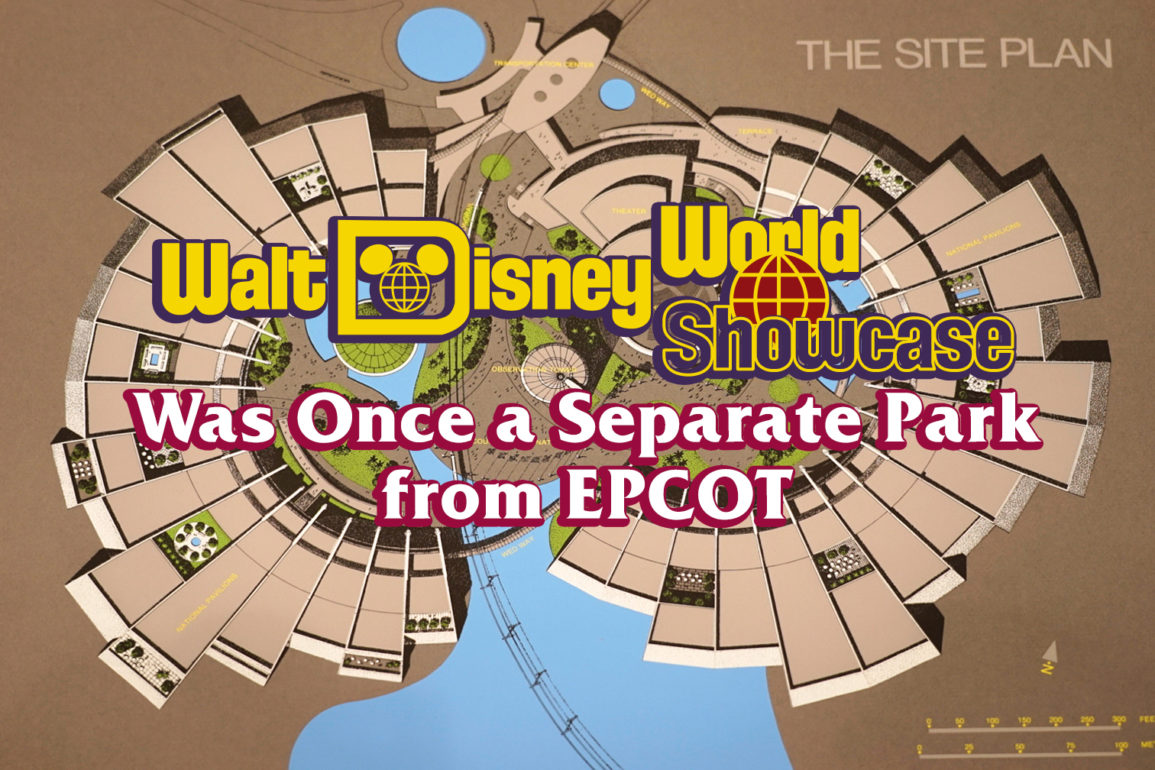 We recently brought you an exclusive photo and video tour of Heritage Auctions’ “Art of the Disney Theme Park” auction, which takes place April 8 – 10, 2021. We even recently perused a book showing plans for the Disney’s America theme park that was cancelled in the 1990’s. During our visit to Dallas, two more books caught our eye.

Printed in 1975, the books detail plans for “Walt Disney World Showcase”, a separate gate planned for an area between the Magic Kingdom and EPCOT’s Future World. The promotional books were designed to convince countries to invest in a pavilion.

The smaller, side-stitched book is printed on glossy, high quality paper. A larger, spiral-bound book further details the site location, layout, and pavilions. We Have a video showing off the two books below, but a photo tour is available further down the page if you prefer.

The cover includes a call to action for potential investors. “…With any new concept, there must first be a need, then a right time, then a right place… For the World Showcase, the time is now, the place is Walt Disney World… and the need was never greater.” Concept artwork featuring international flags is set inside the Walt Disney World globe logo.

Inside, high-quality photos show the Walt Disney World Resort in the mid 1970’s. Cinderella Castle, The Hall of Presidents, and Disney’s Contemporary Resort are pictured. A United States map denotes the location of Walt Disney World and Disneyland. An inset zooms in on Disney’s Central Florida property. The Magic Kingdom area attractions featured in the photos are located within the white circle on the inset map.

The next two pages are devoted to the EPCOT Future World Theme Center. We see futuristic buildings and the Walt Disney World monorail in this sweeping panorama.

According to the book, “EPCOT will serve as the catalyst in bringing together ideas and innovations from the creative centers of science, government, industry and the arts.”

Walt Disney World Showcase is referred to as “a major EPCOT Satellite.” Disney encourages nations to participate, mentioning that “unlike a world’s fair, EPCOT’s World Showcase will be a permanent international exhibition. No nation’s exhibit or restaurant or product displays will be ‘torn down’ after one year or less.”

Concept art shows what World Showcase would look like from above and from the ground level.

Attractions like rides and CircleVision films were part of the plan.

In addition to concept art, Disney has included photos of Imagineers building scale models. Note how similar the Mexico Pavilion looks to what was eventually build inside EPCOT.

Plans also called for an International Village to be located to the east of Walt Disney World Showcase.

In addition to World Showcase, four other EPCOT “satellites” were planned.

A WED Way PeopleMover connects the pavilions, which surround gardens and an ampitheater.

This illustration shows the WED Way route and stops (red line and dots), the promenade (yellow) and three available pavilion sizes: A, B, and C.

“Typical” pavilions featured trade centers, hospitality, and merchandise on the promenade level. Attractions and dining would have been located on the courtyard level.

Pavilion A has 26,500 square feet of minimum net usable space.

Pavilion B would have allowed for 44,000 minimum square feet.

The largest pavilion offered, Pavilion C, would have had a massive 64,000 minimum usable square feet.

So, what dod you think of the plans for The Walt Disney World Showcase?

Refurbishment of 'For the First Time in Forever: A Frozen Sing-Along Celebration' Pushed to January ...August 22, 2022
REVIEW: Impressive Chicken Yakitori, Beef Tataki, and More Join the Frushi at Hanami for the 2022 EP...March 3, 2022
Disneyland Shop Briefly Closed Due to Rodent Infestation (Not Mickey and Minnie)August 9, 2022