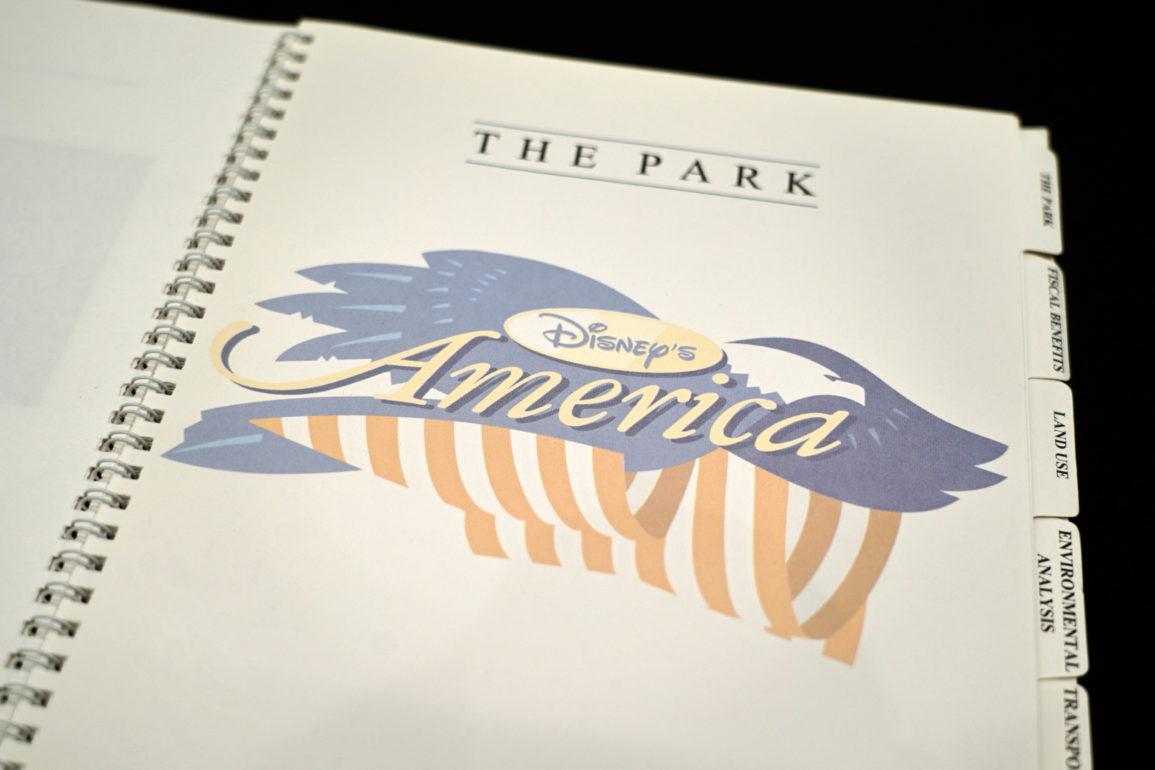 Inside Disney’s America: A Look Into A Rare Patriotic Proposal for the Unbuilt Park

Did you know we almost had a Disney theme park in Virginia?

Disney’s America, “Celebrating America’s diversity, spirit, and innovation,” was announced to the public in 1993. Disney had purchased 3,000 acres of land, intending to pay homage to America’s storied past while making history fun.

Recently, we were invited to Heritage Auctions in Dallas, Texas, for a preview of “The Art of the Disney Theme Park,” a Disney-centric auction that will take place April 8-10.

We were able to look at a rare piece of Disney’s America—the Executive Summary of Rezoning Application. This document is from January 1994. While a rezoning application may not be everyone’s idea of a good time, it contained a mine of information about the unrealized theme park.

An introduction to Disney’s America displays the concept art at the time of the proposal. The park is described as “a single vision — a new order based on the promise of democracy.”

“Disney’s America celebrates the qualities that have always been the source of our strength and the beacon of hope to people everywhere,” the book declares. Indeed, the bold logo is an amalgam of the most American iconography—an eagle and the U.S. flag.

The proposal book gave us a gift we had never seen before: unique logos for each land within the park. Crossroads USA was to serve as the hub for Disney’s America. This land was set to represent America during the years of 1800 – 1850.

Inside Crossroads USA, guests could board one of two antique steam trains that would take them on tour around all nine lands within the park. The steam train is seen in the land’s logo alongside a horse-drawn wagon.

Presidents’ Square, representing 1750 – 1800, featured Washington prominently, both the man and the capital.

The land would have been host to an attraction similar to the Hall of Presidents.

Native America would have featured our nation’s first people, representing the time period of 1600 – 1810.

Native America was slated to star a raft ride based on the Lewis and Clark Expedition, as seen in the concept art above. This concept would later become the basis for Grizzly River Run at Disney California Adventure.

Civil War Fort was to represent one of America’s most important historical eras, 1850 – 1870. The logo featured President Abraham Lincoln set against the warring flags.

A Circle-Vision 360 attraction similar to EPCOT’s Canada Far and Wide and Reflections of China was planned for this land.

We the People would feature a replica of Ellis Island. There was a rumor that this building would host The Muppets in some capacity.

Fittingly, the star of the land was to be a roller coaster called Industrial Revolution.

This critical era would highlight our military heroes with vintage aircraft, interactive exhibits, and live acrobatics shows. Condor Flats at Disney California Adventure would take on this mantle in later years.

America’s agricultural heritage came to the forefront at The Family Farm. The concept for this land would make its way to Disney California Adventure as the Bountiful Valley Farm.

This land, highlighting the agricultural boom of 1930 – 1945, offered guests the opportunity to experience life on a farm. They could even milk a cow!

The State Fair, the third side of 1930 – 1945, showcased a good ole’ American tradition. The land would also become part of Disney California Adventure as Paradise Pier.

In particular, the huge Ferris Wheel and wooden roller coaster would appear at Disney California Adventure as the Sun Wheel and California Screamin’, respectively.

This sketch of the master plan features Mickey in the location of Disney’s America. One of the biggest reasons that Virginia locals opposed the park was the fear of the Disney-fication of history. The giant Mickey head could not have helped Disney’s case.

You can find the “Art of Disney Theme Parks” auction here. You can also check out our longer video tour of more artifacts from the auction:

For more about Disney’s America, take a look at this brochure from 1993.

Would you have visited Disney’s America?